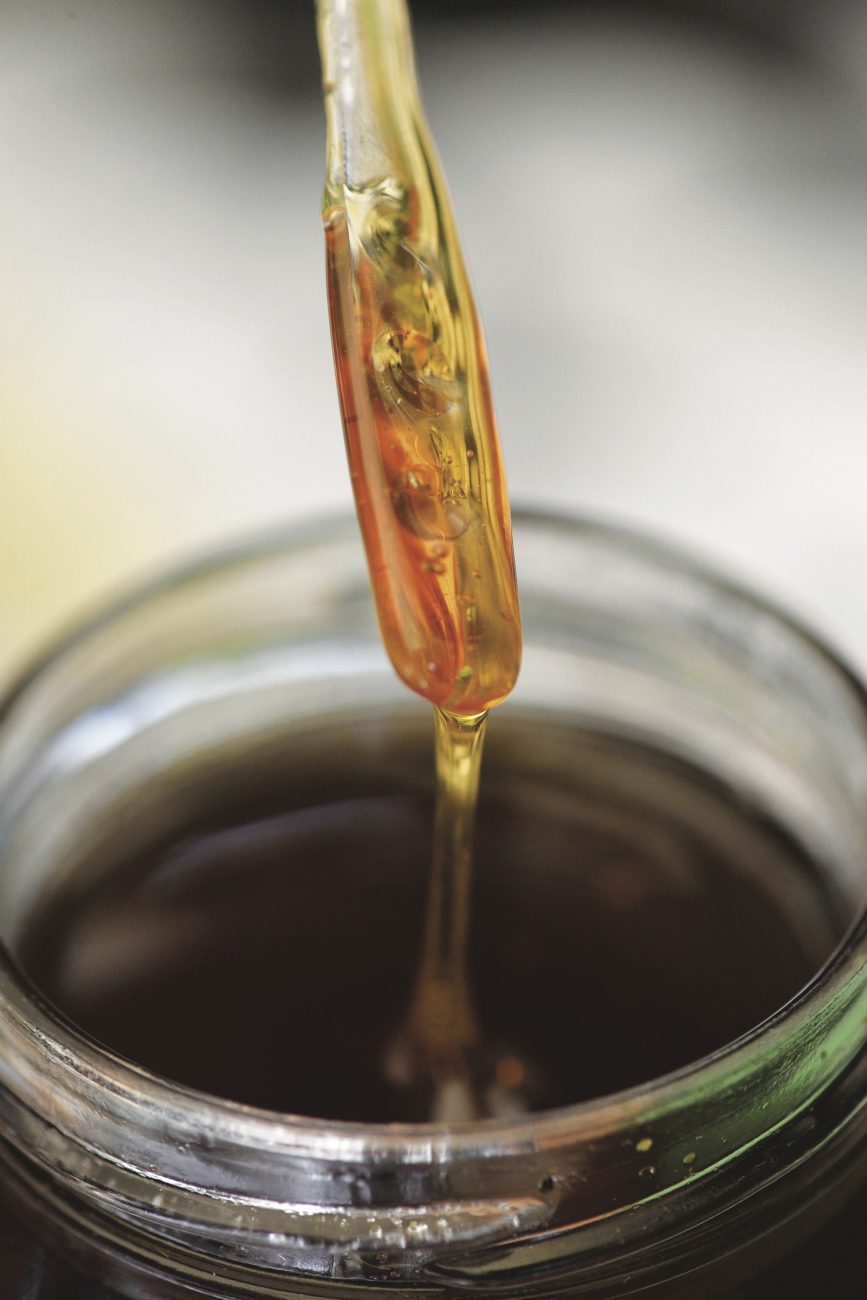 Honey might not come to mind when thinking about Lebanese food products. But Lebanon has a deeply rooted history with the gold nectar; it was even mentioned in the Old Testament.

Though honey production may have receded from the forefront of the Lebanese agro-industry since the days of the Bible, it has garnered increased attention since 2012, thanks in part to international non-governmental organizations. And while a lot of work still needs to be done to further develop the honey industry, the past five years have seen many steps in the right direction.

Beekeeping and honey production are considered to be businesses with relatively low barriers to entry. Nadine Chemali, technical director of marketing and exports at the USAID-funded Lebanon Industry Value Chain Development (LIVCD) project, says, “Our goal is to increase the income of people in rural areas. Honey is ideal for that, because it’s a low-investment project, and you don’t need to own land.”

Beekeepers in Lebanon move their hives three times per year, according to what is blossoming during that season: citrus trees in the spring, honeydew from oak trees in the fall, and wild flowers and thistles in the summer. Chemali explains that most beekeepers ask landowners for permission to place hives on their property, or work out agreements to share a percentage of the honey produced.

Investment in honey-making is also relatively low: The price of one beehive is just $200, according to the beekeepers interviewed for this article. Given that the current yield of a single beehive in Lebanon is around seven to 10 kilograms, and that honey is sold at an average of $33 per kilogram, new beekeepers can theoretically recoup their investment at a fast rate.

Kafalat, a Lebanese financial company that helps small and medium-sized enterprises obtain loans, helps honey producers access funding from commercial banks. A number of the beekeepers Executive spoke with say they have benefited from this program, which covers part of their initial investment, mainly into beehives, equipment, and small workshops.

In addition to the efforts of international NGOs to promote and grow beekeeping in Lebanon among rural families, an increasing number of personal investors have been developing honey production businesses over the past five years.

An architect by profession, Marc Antoine Bou Nassif founded L’Atelier du Miel in 2012  with his brother and a friend. “We wanted to reconnect with nature, and we started thinking of different activities to do that, but the one that really captured our goal was beekeeping, for a variety of reasons,” Bou Nassif says. “Most activities done with nature only connect you with one aspect of it: one season or one region. With beekeeping, it’s all of nature, and all seasons.” L’Atelier du Miel owns 2,000 beehives and works with eight beekeepers.

Roland Kaddoum, (no relation to Kaddoum honey brand) the director of pediatric anesthesia and director of the operating room at the American University of Beirut Medical Center, will launch Le Miel du Nazih by the end of 2017 in memory of his father, who was a reputable beekeeper, and because the activity brings him joy. Kaddoum owns 200 beehives with a yield of 900 kilograms.

Despite this growth, Lebanon’s average annual honey production is low compared to other countries. A beehive in France typically yields 40 kilograms of honey, four times more than the average Lebanese beehive. In 2015, when figures were last collected, Lebanon produced just 1,920 tons of honey, up from 1,360 in 2011. That same year, France, a medium-scale honey producer, produced 18,500 tons of honey.

Fady Daw, the founder of Adonis Valley—a Lebanese producer of organic food products, including honey—explains that yield has been low for the past three years because of the effects of our climate change on the environment. “Our dry season has become very long, and sometimes stretches from May to November, while in France, for example, it rains a whole lot more during this period. Also, temperatures in Lebanon are rising up to the 30s very early in the season, which is killing our flowers,” says Daw. Since bees rely on these flowers for their nectar, the high temperatures affect their ability to produce honey. Daw says that Adonis Valley produced a ton and a half of honey this year, slightly more than last year.

Maurice Habib, a longtime beekeeper who sells his honey in both Souk El Tayeb and the Earth Market, says annual production from his 600 beehives has dropped from an average of 16 tons five years ago to just four tons last year because of changes in the weather.

According to Chemali, many beekeepers have not have not formally studied their craft, and are unaware of how to increase the efficiency of their bees so that they naturally produce more honey, or how to make sure they all stay alive during winter. So LIVCD has provided training for 3,600 Lebanese beekeepers, and partnered with professionals to develop queen bees’ production centers to supply the beekeepers with better queen bees, which control their hives and protect them from diseases. 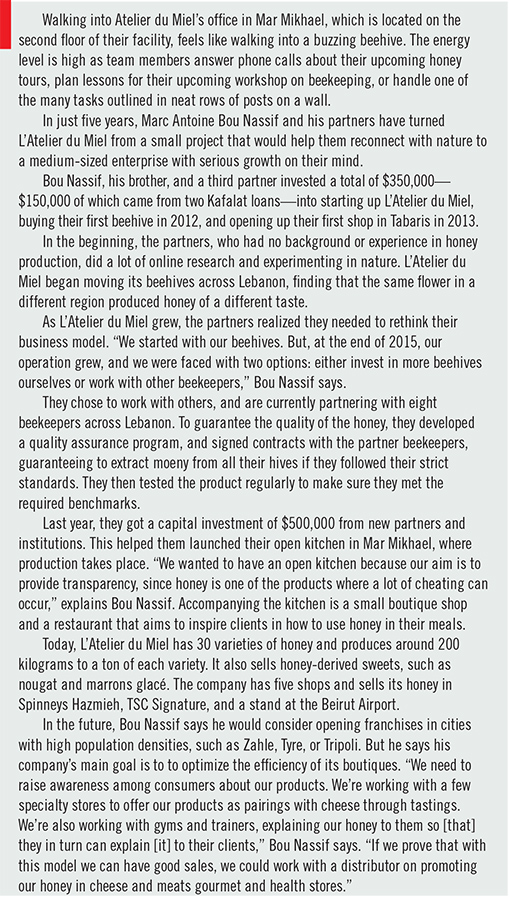 Faced with such low yields, some honey producers resort to dirty tactics to increase their supply.

The most common trick is mixing Lebanese honey with a cheap imported variety—despite a $5 tax per kilo on imported honey, some honey can cost just $1 per kilogram—and selling it as pure Lebanese honey. “How do you compete with that? You can only do so if you continue to follow best practices despite losses,” says Habib, who hopes that his reputation will keep his customers loyal to him.

Oak honey, which is also known as black honey, is the most popular variety  among Lebanese, but it is also the one whose yield is decreasing the fastest. A popular trick to increase its volume, Daw explains, is to feed bees sugar or a synthesized syrup developed in China just before the onset of oak-honey season. The honey produced through this type of feed is then mixed with whatever oak honey is naturally produced so that its dark color is retained, and then sold as Lebanese oak honey. This is an accepted practice, but honey produced this way may have higher traces of sugar and less beneficial enzymes.

Other tricks include heating the honey to give it a looser consistency and more clarity, or exaggerating the amount of honey in jars for sale.

The buzz on quality

While such techniques are not life-threatening, consumers are cheated by being sold a lower quality product under the guise of a superior one—and they miss out on health benefits associated with the enzymes in natural raw honey. “The idea is that the consumer has the right to make well informed decisions about the product they choose. They may choose to buy the cheaper one despite the quality, because it is all they can afford. But you cannot sell the cheaper produced product as [as if it were] a high-quality one,” says Kaddoum. He says these issues motivated him to produce his own honey and prove that “high-quality, authentic, and clean honey can be produced in Lebanon.”

Small-scale honey producers are also affected. “Consumers cannot easily distinguish the difference between quality, well-produced honey and honey that has added sugar. They buy the cheaper one from the supermarket shelf believing they are the same Lebanese honey,” explains Habib.

In an attempt to combat this lack of awareness among consumers, some beekeepers are organizing educational workshops on beekeeping and tours of their beehives and production workshops. Both L’Atelier du Miel and Adonis Valley organize tours (Le Miel du Nazih will do so once their workshop is open), and L’Atelier du Miel is also providing classes.

LIBNOR, the Lebanese standards institution that is a part of the Ministry of Industry, has set some basic standards for honey production that include limits for purity and freshness, assessed using eight simple chemical tests, and provisions on accurate labeling.

However, according to those interviewed for this article, these standards and other international ones only come into play for export markets, and are rarely—if ever—enforced in the domestic market. As Bou Nassif explains, standards are imposed locally only when a consumer makes a complaint through the Ministry of Economy’s Consumer Protection Board.

This leads to a chaotic market where consumers tend to not trust large local producers. Many still prefer to buy their honey directly from beekeepers in their stores or in the markets they exhibit in. (A growing number are buying local honey from organic or healthy-food boutiques due to its increased availability in such stores).

Daw explains that this model has its advantages because there is more accountability when dealing directly with the beekeeper. But he says basic business practices—such as labeling the jar with at least the name of the product, net weight, and contact information—are a must.

Bou Nassif advises consumers who want to buy honey directly from the beekeeper to do so only from those they trust and who have a solid experience in honey production, because inexperienced beekeepers may use antibiotics or pesticides that leave traces in honey.

According to Bou Nassif, Lebanon is one of the few countries where bees can feed naturally throughout the year. “We decided to produce different kinds of honey, and we discovered that in Lebanon we have a very special topography, which allows us, in a very small area, to produce honey all year long,” he says.

He goes on to explain that honeybees in Lebanon are polyfloral, which means they feed on a variety of blossoms in the same space, which is also relatively uncommon and adds more health benefits to the honey.

These characteristics make Lebanese honey high-quality. In 2016, LIVCD organized a national media campaign in collaboration with the Syndicate of Dietitians that promoted the health benefits and superior quality of Lebanese honey in the domestic market. Beekeepers applauded the effort, but Daw says that such campaigns are needed on a more consistent basis.

While Lebanese honey is exported in small amounts to the region, Bou Nassif says its quality can compete internationally, albeit at a boutique level with high prices. He proposes that Lebanon should take a leaf from Australia’s book and its promotion of Manuka honey.

Manuka honey is sold according to a grading system—the higher the grade, the more expensive it is—and Bou Nassif says the Lebanese honey industry would greatly benefit from a similar system that will incentivize beekeepers to produce high-quality honey. “I believe the best way to boost the honey industry in Lebanon is to promote the quality we have and communicate that in the region. This needs marketing at the level of the ministry, but when it has quality grading in place and communicates that well, we can sell honey at premium prices internationally,” Bou Nassif says.