The United Arab Emirates and Qatar were lead performers in the Middle East and North Africa (MENA) last week, showing gains of above three percent for Abu Dhabi Exchange, Dubai Financial Market and Qatar Exchange. The four other GCC bourses showed gains of less than one percent in Bahrain and Oman, a flat week in Kuwait and a drop of half a percent in Saudi Arabia.

Across MENA, seven markets were up, three were flat with index changes of 0.2 percent or less, and two ended the week lower. The most notable gainer outside of the GCC was the Egyptian Exchange; while the underperformer of week 15 was the Beirut Stock Exchange (though the drop was less than one percent). 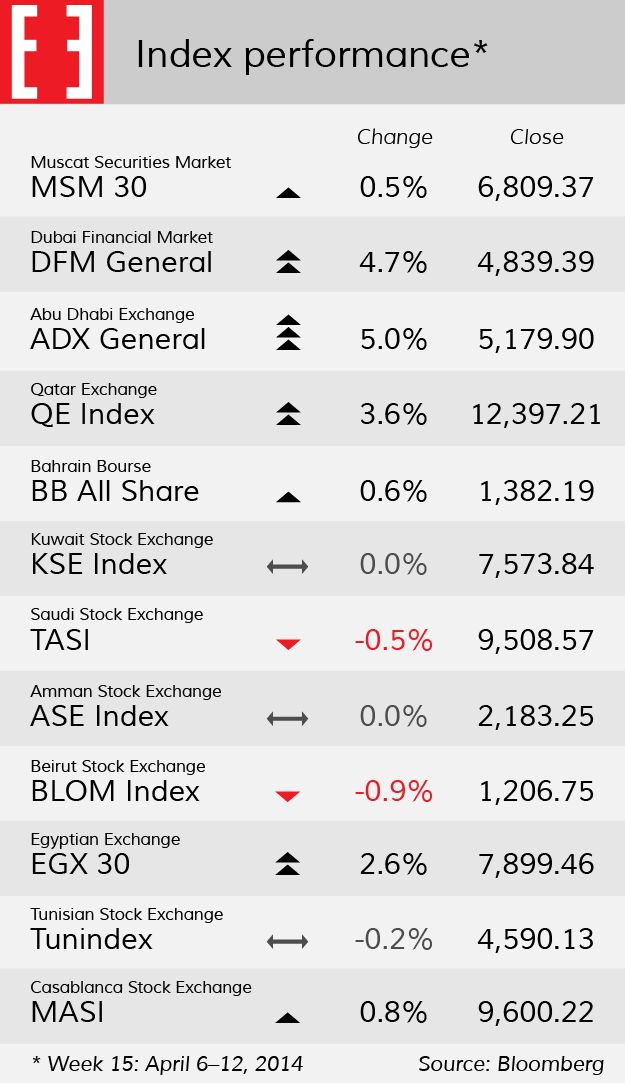 The Qatar Exchange rallied in week 15 and the QE Index closed on April 10 up 3.6 percent from April 6. The index ended the week just below another 5-year high reached intra-day on Thursday. On two of the week’s trading days the Doha market saw volumes of more than 20 million shares for the first time in 2014. With most companies scheduled to announce their first-quarter results between now and the end of April, Doha-based analysts expect that the market will remain vigorous.

The Dubai Financial Market had a similar week – with overall gains and a new peak. The DFM General Index rose for another week and closed with a 4.7 percent gain and was up around 45 percent for the year to date. Widening its year-to-date (ytd) increase by more than 12 percentage points in the first two weeks of April alone, Dubai’s performance in 2014 is approaching frightening dimensions.

The Abu Dhabi Exchange likewise had a strong week. From a gain of 40 points on April 6 the index progressed to add more than 100 points on April 10, for a total weekly increase of just over 5 percent.

Besides expectations of corporate earnings announcements that fuel investor appetites, the narrative of the three buoyant bourses includes anticipation of new foreign financial investment inflows when Morgan Stanley Capital International (MSCI) will begin including the UAE and Qatar in their Emerging Markets category of indices, most likely on June 2.  The upgrade from frontier market status, long coveted by the operators, was announced in June 2013.

Listed companies in the UAE and Qatar, such as real estate firm Deyaar and several banks, are expanding the stock percentage accessible to foreign investors. Deyaar, which announced on April 5 that shareholders approved allocating 25 percent of share capital to foreign investors, cited the MSCI upgrade as reason for the decision.

Yet at the same time, there are suggestions that long-term investors harbor enduring skepticism on emerging markets. The International Monetary Fund for example says in its April 2014 edition of the Global Financial Stability Report that “changes in the composition of investors are likely to make portfolio flows to emerging market economies more sensitive to global financial conditions.”

Of the GCC markets not affected by the MSCI status upgrade, Saudi Arabia’s Tadawul showed the greatest sluggishness in week 15, with a 0.5 percent drop in the TASI. The Kuwait Stock Exchange Index added just over one point net in the course of the period, for a gain that was statistically imperceptible. The country’s top bank, National Bank of Kuwait (NBK) announced 3.2 percent higher first-quarter net profit and 13.1 percent higher assets, both year on year, on April 13, ahead of the new trading week.

After three weeks of drops, the Muscat Securities Market advanced in week 15 with a gain of half a percent. On two days of the past week the Omani bourse saw the highest trading volumes in two months.

The Egyptian Exchange selling spree tapered out on the first trading day of week 15 and the EGX 30 index moved up on four consecutive days, for a weekly gain of 2.6 percent. The week’s strongest day of gains, with a 1.7 percent leap, was Thursday.

Somewhat curiously, the country’s state information service (SIS) made it a point to note the day’s performance in a news brief. One can call this curious because the report was the governmental agency’s first stock market news in two months; the news item fits, however, with a selective SIS reporting tendency of the past three to highlight positive EGX developments and largely ignore market drops.

The Moroccan and Tunisian securities markets were mixed; the MASI ended intra-week fluttering with a 0.8 percent gain and the Tunindex, which showed a 20-point upward spike on Wednesday, gave up 0.2 percent on the week.

In Jordan, the Amman Stock Exchange Index continued to move sideways although the index reflected a moderate day of pressure through a 30-points dip on April 7. On the Beirut Stock Exchange, the Blom Index dropped 0.9 percent on the week, giving the general impression of a gently sloping trend since the country awoke in late February to the announcement of a new cabinet. Between Feb 28 and April 11, the Blom Index gave up 27 points, or about 2.2 percent.

Public healthcare on the brink