With the Egyptian Exchange continuing to rally ahead of almost guaranteed presidential election outcomes, only one securities market in the Middle East and North Africa moved unmistakably higher in the year’s 21st week.

Overall, two benchmark indices rose, three were flat and seven fell. All markets in the Gulf Coordination Council dropped, save the Omani bourse which was flat. Excluding the GCC and Egypt, there were no signs of any strong market direction in the remainder of MENA. 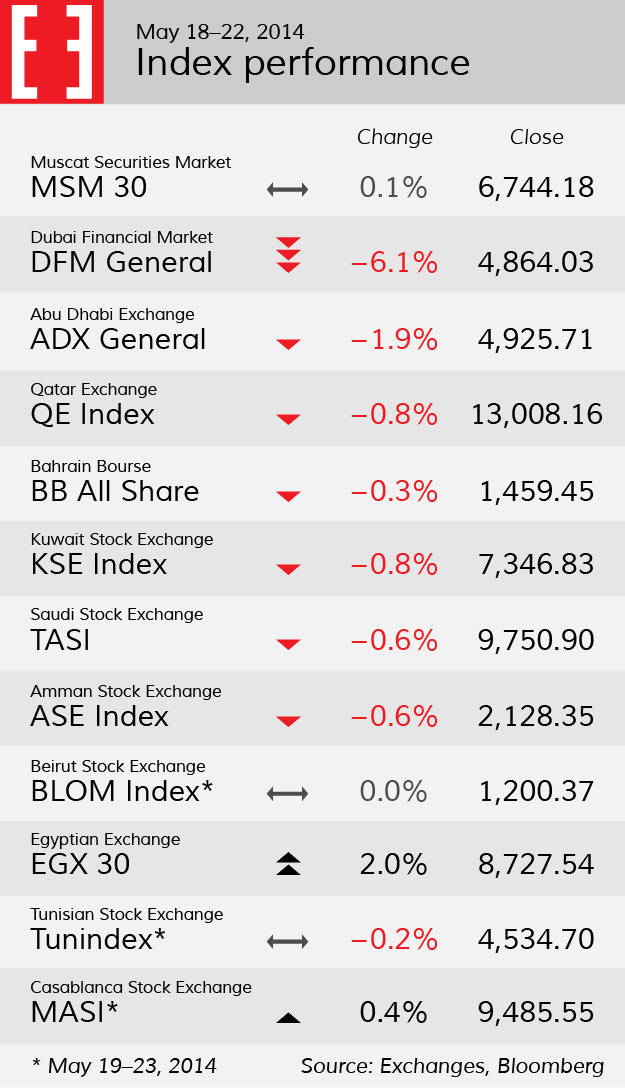 As to the year-to-date picture, the Dubai market is still the solid ‘el supremo’ in terms of percentage gains but its rate of improvement receded to 47.5 percent by end of the week, followed by the Qatar Exchange at almost 31 percent and the EGX 30, which also leapt beyond 30 percent when compared with the start of 2014.

Clueless in the Gulf

Even as the actual inclusion of the selected stocks in Qatar and the United Arab Emirates in the MSCI Emerging Markets Index is yet to become effective, a first round of opportunistic selling and booking of gains in the markets of Dubai, Abu Dhabi and Doha cannot surprise.

The QE Index ended the week after the announcement of its ten MSCI EM joiners with a net drop of just 0.8 percent, but the index moved below the 13,000 points line on three of the week’s five trading days before ending the period with a 250 point uptick. The ADX’s corresponding ride drove the index south for three sessions before a partial recovery.

Abu Dhabi’s weekly net loss was 1.9 percent, which still looks benign when compared with the Dubai market. The DFM Index got slammed down a solid 10 percent by fast sellers in the first three sessions of the week before regaining 200 points and closing week 21 a bit better at −6.1 percent.

Accounting for about two thirds of activity on the DFM, real estate and construction stocks drove the market in Dubai, with financial stocks accounting for most of the remaining activity. Emaar, Arabtec, Union Properties, and Dubai Islamic Bank were among the most pressured. Banking and real estate companies were key contributors to activity on the ADX as well, where banks NBAD and FGB fell by 3.9 percent and 5.3 percent in week 21; real estate stock Aldar dropped 7.6 percent in the same period.

In property and banking and on both UAE exchanges, the attention was firmly focused on stocks that were most affected by the MSCI EM announcements at the end of week 20, either because they were included or had been expected to and failed to make the cut.

As their markets danced the volatility quickstep, newspaper interviews with equity analysts in Dubai and Abu Dhabi pointed to a firm consensus of uncertainty on near-term market developments and possibilities of a correction after the strong gains seen since the start of 2013.

In Qatar, the MSCI EM joiners in banking and manufacturing were more interesting to watch than real estate joiner Barwa; Qatar National Bank and Industries Qatar dropped in the four percent range and Commercial Bank of Qatar by almost three percent during the week as Barwa moved down less than one percent.

The Saudi and Bahraini markets, positioned at the opposing poles of the GCC size spectrum, each moved through the week in general alignment with the drop and partial recovery path of the aforementioned bourses. The markets in Kuwait and Oman inversely exhibited more optimism in the middle of the week and recorded index drops towards the end of the week.

There was something of an update from the policy front as the Kuwait Capital Market Authority released a statement about plans by the Gulf Cooperation Council’s heads of capital markets, which convened in Kuwait for a regular committee meeting to discuss collaboration of GCC stock exchanges.

“The [capital markets] committee approved the [disclosure and governance] committee’s suggestions for single stock disclosure rules and uniform corporate governance principles,” said Kuwait’s state news agency, KUNA, after the meeting concluded on May 19. Appeals for greater integration of GCC stock markets are a recurrent theme in the six states’ attempts to power up their capital markets beyond the current fragmented scenario.

Stock exchanges react vigorously to innovative shocks and duly so because the predictable market valuation of a cart maker, for example, will be changed after the invention of a better transportation device such as a bicycle. But events with unpredictable outcomes — such as political elections — sometimes seem to get bigger responses than warranted.

A recent example for hyped market expectations from political elections came from India where the Sensex index of the Bombay Stock Exchange rallied 9.7 percent between the beginning of May and last Friday. This rise, taking place in parallel with the national elections and reacting to the win of the opposition Bharatiya Janata Party, is a bet on a stronger economic future based on a political change. Yet due to India’s complex development process, one must ask if the bet isn’t larger than what can be reasonably predicted.

A similar scenario seems to be playing out in Egypt where the stock market’s EGX 30 index concluded a 1,000-point rise over the past seven weeks with a 1.1 percent gain on the last day before the presidential elections, taking place today and tomorrow. According to Cairo’s Ahram Online, investors were buoyed by candidate Abdel Fattah al-Sisi’s 94.5 percent approval rate by the country’s early overseas voters.

Also in the run up to the elections, Egypt’s first initial public offering since 2010 — of materials producer Arabian Cement — resulted in proportionally huge demand as the $110 million offering of close to 25 million shares was subscribed nearly 18.5 times, according to a disclosure note on the Egyptian bourse. Market participants and IPO facilitators widely expect that the country is going to see more IPOs despite observations that the outlook for the Egyptian economy is far from solid.

These scenarios contrast interestingly with another big election event that played out between May 22 and 25. Observers of European markets said that investors there seem to have directed their attention not on the voting for the European Parliament but more on the mood at the European Central Bank — even as the political air was loaded with concerns that extremists were taking big share of the vote.

The calm of the developed European markets in face of the continent-wide elections might make the irreverent observer wonder if the Lebanese are onto something when it comes to the importance of elections to stock markets. This is simply because the Beirut Stock Exchange remained in total calm in week 21 and index movements expressed not a trace of panic even as it became clear that Lebanon’s presidential elections were failing for the umpteenth time and would leave the country with a crucial vacancy at the top.

On the other hand, a panic would of course have been a sign of life.

Should our banks pay more? Yes.