In the Lebanese banking sector’s cherished game of claiming the deposit throne, month-on-month drops of private sector deposits are usually reserved for the January statistics, in what has become known as the annual correction of window dressing at the end of the business year. That is why, when the relevant central bank data is pulled up as a line graph, January 2011, January 2014, and January 2015 look like little potholes on a long, ever ascending highway to a heaven of private sector deposits.

Besides the January corrections, deposit dips in the past five years have been few and far between, such as February 2011, July 2012 and April 2013. None of downward moves lasted more than a month and none amounted to more than a few decimals in the sector’s deposit tally of billions of dollars. This fact alone was enough to make alarm signals sound in the news, that July was another of those months with a minute contraction in private sector deposits appears unseemly; namely a 0.2 percent fall from $148.58 billion in June to $148.39 billion in July according to Banque du Liban data released in mid-September.

In numbers based on central bank reporting, total private and public deposits at all commercial banks rose by $4.26 billion from $143.4 billion at the end of June 2014 to $147.6 billion at the end of last year and by another $4.15 billion to $151.8 billion at the end of June before receding to $151.5 billion in July. Total deposits are generally a few billion dollars higher than total private sector deposits. But looking at either data stream, the growth rate in H1 2015 has clearly slowed percentage wise when compared with six-month periods in recent years. However, this observation itself cannot be a precursor of the sky being about to crash down.

The picture of our banking activity also remains within bounds of normality when reviewing the performance of top banks in the first half of 2015. Market leader Bank Audi recorded very minor growth of assets and deposits. Both its domestic and foreign assets expanded by less than 1 percent in the first half of 2015. Domestic assets denominated in USD saw the largest increase, at 2 percent year to date. Loans in the bank’s foreign operations contracted when expressed in USD, domestic loans in the Lebanese Pound expanded by over 5.6 percent in the year to date but this increase could not keep the consolidated lending growth in the black; the overall loan portfolio shrank by 0.8 percent.

At BLOM Bank, the growth rates looked stronger but not decidedly stronger. Assets edged up by 2.3 percent, deposits by 3.1 percent and loans by 1.6 percent. Domestic growth surpassed growth of BLOM’s foreign entities in all three categories, by about one percentage point in loans, two percentage points in assets and almost three percentage points in deposits. While Audi and BLOM’s combined market share of total deposits dropped by about 30 basis points when compared with mid-2014, combined, their position remained dominant with a 37 percent control of alpha group deposits.

The first-half net profits of the two top banks amounted to $202.1 million for Audi and $190.4 for BLOM, followed by $70.1 million at Byblos Bank, the third largest Lebanese bank by assets and deposits. Year on year, Audi achieved a 6.5 percent profit increase, BLOM 6.2 percent. For Byblos Bank, the increase was 1.1 percent. The latter bank’s first-half performance, which was a mix of net interest income versus non-interest income, underwent a rather different development to that of Audi and BLOM. Byblos Bank’s fees and commissions income dropped 10.4 percent year on year, its trading and investment income, however, jumped 24.7 percent higher. Byblos Bank achieved improvements of 8.8 percent in net interest income and 8.7 percent in non-interest income. 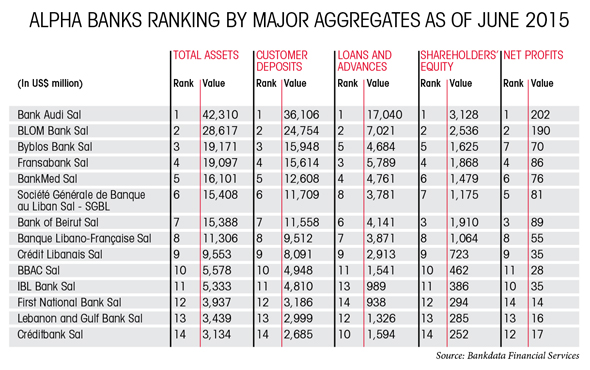 Growth of deposits in different pockets, lending activity subdued across the ranks

The report card on profits is also coherent for the entire stratum of the 14 largest Lebanese lenders. Banking intelligence company BankData reported in early September that the combined net profits of banks in the alpha group, comprising banks with deposits above $2 billion, increased by 9 percent for the first half in 2015 when compared with end June 2014. Total alpha group profits for H1 2015 tallied at $993 million according to BankData, with the top five banks by profits – Audi, Blom, Bank of Beirut, Fransabank and SGBL – accounting for $648 million, or 65 percent of the total.

The three banks with the strongest first-half deposit growth rates were Lebanon and Gulf Bank (LGB) with 7 percent, followed at some distance by Credit Libanais and BBAC, each showing growth in the mid four percent range. The three banks together represent about 9.5 percent of alpha group deposits. While Credit Libanais and BBAC each reported growth of domestic deposits that was above 5 percent in conjunction with drops in deposits in entities abroad, LGB derived its growth more from units abroad than from domestic operations, showing year-to-date deposit growth rates of 22.5 percent from entities outside of Lebanon and 6.9 percent within the country. Of the two banks that experienced negative year-to-date growth of deposits, First National Bank (-1.7 percent) and Banque Libano-Francaise (-0.4 percent), FNB saw outflows from foreign currency accounts in the domestic market while BLF achieved a small gain in domestic deposits and reported lower deposits in foreign entities. FNB’s and BLF’s combined market share in alpha group deposits is 7.7 percent.

The strongest loan growth was represented by CreditBank at 7.7 percent, followed by BBAC at 5 percent. On the balance, however, the overall evolution of the alpha group’s loan portfolio was unsettlingly flat for the first half in 2015, at 0.1 percent growth. Six of the 14 alpha group banks showed year-to-date drops in the loan portfolios, with contractions going up to 5 percent. The lending growth that occurred was, with a few exceptions such as CreditBank, concentrated on Lebanese Lira-denominated loans while the alpha group’s portfolio of foreign currency-denominated loans regressed mildly.

In short, developments of assets, deposits, and loans since the start of 2015 have varied in the customary fashion from bank to bank and often differed notably between H1 2015 and H2 2014, and also within individual institutions.

The most striking commonality in the sector’s performance numbers is related to deposit growth when comparing year-to-date growth in the first six months in 2015 with the year-on-year growth between end June 2014 and end June 2015. With the single exception of BLF, whose small contraction of deposits was wider year on year than in the year to date, all banks in the alpha group by end of June 2015 had seen significantly stronger deposit growth rates in the past twelve months than in the past six months. More specifically, for the bottom half of the alpha group banks, the growth percentage of the 12-month period was three times or more what they had achieved in the first half of 2015. On average across the alpha group, the year-to-date deposits growth rate was 2.2 percent as opposed to 6.9 percent year on year.

This slowing in the ability to attract deposits is the hidden, or not so hidden, worry that lurks beneath the floorboards of the Lebanese economy. Consistent and significant growth in deposits is needed to sustain the financing of the public sector deficit and of the private sector. This growth necessity does not chime all that well with the information in the BankData report for H1 2015 that “deposits rose by 2.2 percent over the first half of 2015, with domestic deposits growing by 3.0 percent while foreign deposits decreased by 1.4 percent over the period. Out of domestic deposits, [LBP] deposits grew by 4.6 percent while foreign currency deposits increased by 2.1 percent.”

While it is certainly worth keeping in mind that deposit growth in such low percentage ranges could cause the Lebanese economy serious pains after few short years, the detailed numbers for the first half of 2015 and the headline numbers for July present a nuanced picture of banking sector performance, showing a reality that does not lend itself to broad-brush predictions of doom.

Expectations voiced by BDL Governor Riad Salameh in the September monthly meeting between the central bank and the Association of Banks in Lebanon are that banks will achieve 6 percent growth in deposits and 5 percent growth in lending this year according to a brief report in Byblos Bank’s Lebanon This Week (LTW) publication for the third week of September. According to LTW, Salameh also affirmed the stability of the currency regime and the sufficiency of market liquidity in Lebanon and told bankers that BDL will continue to issue its financial stimulus package in a 2016 edition. (Minutes of the meeting or even a summary were not offered online by ABL or BDL as neither organization appears to have yet put on the mantle of transparency when it comes to keeping the business community in the loop about these important conversations).

For the moment, the analysis of year-to-date sector data and the presence of central bank assurances suggest that now is not the time to cry wolf over any new, vicious imbalance in our banking sector. Lebanese bankers will also act at their own peril if they ignore recent warning flashes of downward adjustments in 2015’s GDP and the change in the ratings outlook from stable to negative. It is indubitable that the banking business, along with the entire country, is in for new challenges and one cannot shout loud enough to alert all “concerned parties” that the political paralysis of the state must be overcome constructively.

A Federal winter is coming

Finally, it is an inescapable insight that, today, global scenarios are just as obscure as the domestic outlook. The past weeks of Federal Reserve soul-searching over interest rate decisions have affirmed the understanding that hiking of the federal funds rate in the United States has certain implications of uncertain direction and magnitude outside the US. This was reflected clearly in references to “developments abroad” and “international developments” in the Federal Open Market Committee’s September 17 statement on the decision to maintain the current rate a little while longer. The potential for a growing dichotomy between US and global interests was immediately highlighted by divergent responses from market participants after the recent Fed announcement and the need to calm moods with a speech by Fed Chair Janet Yellen on September 24 to reassure her compatriots that the return to “normal” levels of the federal funds rate is likely to be initiated before the end of this year.

If anything is more certain than that the Fed’s decisions will impact markets and economies all over the world, it is that these impacts will bring many surprises and give analysts years of work opportunities to formulate hindsight explanations why such events were logical. A safe assumption for any Lebanese observer is therefore that our bankers will have to be at their nimblest, smartest, and most responsible in order to preserve health and growth of their institutions in this emerging global financial environment.