Arab markets continued to grow in week 17 of 2014, performing better than the previous week – with five of the twelve markets improving and only three dropping when compared with four gainers and five losers in week 16. Top gainer of the week was the Dubai Financial Market with a 6.9 percent rise, while the Qatar Exchange soared to an all-time index high. While numerous countries in the Middle East and North Africa were gearing up for elections, the news that drove regional securities markets came from the property and telecommunications sectors. 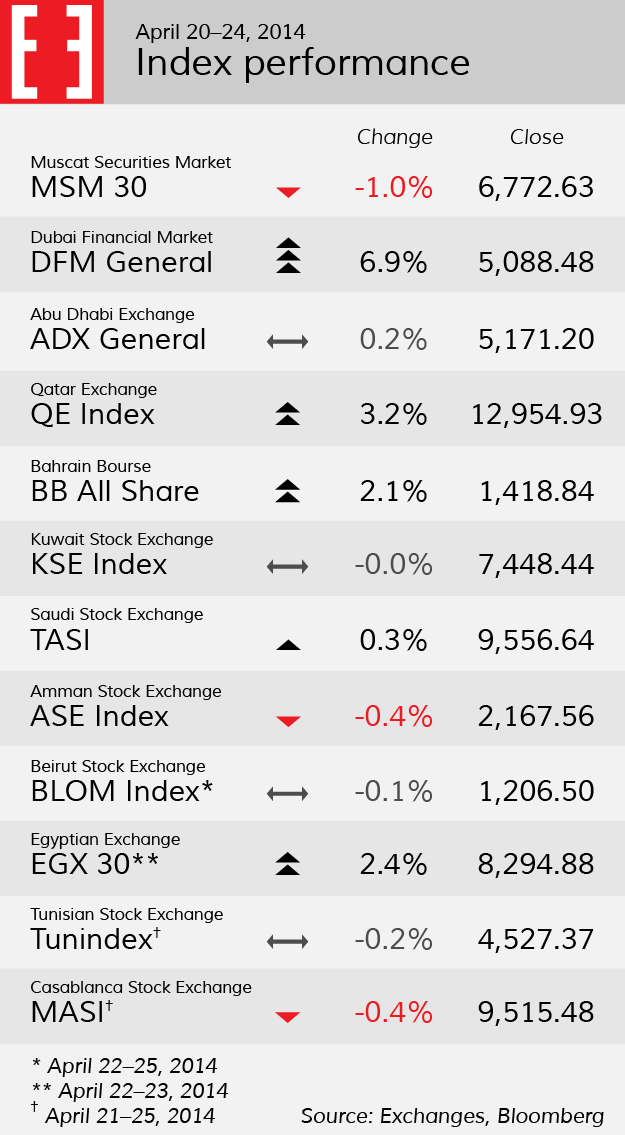 Although Saudi Arabia’s Tadawul shot up 100 points on Sunday the 20th and the TASI reached a new multi-year peak on Monday, the Kingdom’s exchange did not keep that upward momentum and its weekly advance did not exceed 0.3 percent. In terms of percentage gains, Qatar was the week’s runner up to Dubai but the QE Index made a splash by floating up to all-time highs in the second half of the week, though it closed the week 10 points down from that new historic peak.

Out of the two exchanges in the United Arab Emirates, the ADX General Index in Abu Dhabi, with a meager net gain of 0.2 percent in week 17, could not keep up with the DFM General Index whose breaking of the 5,000 points line meant that the Dubai Financial Market achieved its highest reading in 70 months.

Both UAE markets saw result and project announcements from the property construction and development sectors that were extremely noteworthy. In Abu Dhabi, property major Aldar used the Cityscape show to launch three new projects worth a combined $1.36 billion according to media reports. The company’s stock, which hovered at below three dirhams at the start of 2014, reached a high of DHS 4.84 on April 22 before losing some ground in profit taking on Wednesday and Thursday.

On announcements of planned new investments and large-scale projects in the UAE and abroad, DFM-listed construction group Arabtec Holding closed the week at DHS8.74, down from an intraday high of DHS9.50 but several floors above the two-to-three-dirhams range where the stock had been trading in the two years before January 2014.

Emaar Properties fell on presumed profit taking by investors on the week’s last trading day but the annual general assembly of the top regional property company added the expected further spice to the DFM’s mood as the group announced 55 percent higher profits, at $235 million, in the first quarter of 2014 when compared with 2013. After a statement by Emaar Chairman Mohammed Alabbar that the group’s profits are projected at $836 million this year and $1 billion in 2015 and are likely to triple from that amount by 2018, an analyst cited by Bloomberg said these projections were “way too conservative” and probably meant to keep investor expectations lower than the company’s real outlook.

A cool rider on the Dubai securities storm was the market’s operating company, DFM.CO, which announced this past week that its first-quarter profit for 2014 was seven times higher than for the same period a year ago. The market operator’s share price went up 7.8 percent in week 17 and is up about 50 percent since the start of 2014.

With a net loss of 1 percent on the Muscat Securities Market 30, Oman was the period’s underperformer as its week-long index slide canceled gains made in the previous two weeks. The Bahrain Bourse Index on the other hand added over 2 percent. Up for two weeks in row, the small market looks as if it wants to put a three-year trough behind it.

North Africa and the Levant

The least to report on securities in week 17 is from Egypt where the market traded only for two sessions because of holiday observances. But the Egyptian Exchange 30 index nonetheless got one of the region’s better performances out of its mini-week, gaining 2.4 percent. The news that pushed the index up came from the telecommunications sector where Global Telecom Holding, the company formerly known as Orascom Telecom, was buoyed by an agreement for sale of its Algerian affiliate Djezzy to a state fund there.

Tunisian general elections are scheduled to be held before yearend 2014, still several months away. With the government having said earlier in April that it does not expect a lot of improvement for the economy until next year the Tunisian Stock Exchange looked un-energized in week 17; slipping for a second week but at a lesser pace of 0.2 percent when compared with the previous week’s 1.2 percent. The Casablanca Stock Exchange’s MASI gave up 0.4 percent on the week, and so did the Amman Stock Exchange Index in Jordan.

The Beirut Stock Exchange, which was closed on Monday the 21st, carefully concealed any excitement that market participants may have felt about the Parliament’s first unsuccessful session on Wednesday to elect a new Lebanese president. Traded companies may hope for a sentiment boost after a definite election outcome but that could be weeks or more away.

In the meanwhile, low volumes may well continue to be interspersed with very low volumes on the BSE and the index movements may stay just as flat as in week 17, which according to the BLOM Index saw a top-range fluctuation of 5 points or 0.4 percent in the course of the four trading days. The index ended the week almost 0.2 percent lower, testing the importance of the second decimal for an accurate depiction of its movement.

The new vigor of GCC-listed corporations is making impacts beyond index movements. As this positive trend continues, stock markets are becoming a renewed focus of enthusiastic media attention. Newspapers in the regional business hubs are deeming markets worth their regular attention for the first time in a few years, meaning that analysts from various investment firms are being buttonholed for their assumed superior understanding of the very markets that disappointed the overdrawn optimism of most investment firms and brokerages over the past few years.

While Arab stock exchanges have progressed not only in performance terms but also in structural maturity, rumors and speculative statements still appear to have more currency than they deserve, as suggested by an upward correction of a short-term drop in Arabtec stock in the middle of week 17. A resurgence from that drop followed upon the company’s rebuttal of alleged media rumors that it was thinking to stop working on a St. Petersburg 400-meter high rise for Russian energy company Gazprom, because of the crisis in the Ukraine.