Home BusinessFinance To fee or not to fee

To fee or not to fee

The question of whether banks should structure their incomes on the premise of interest alone has long been answered in the negative. Diversification of risks and revenue streams have led institutions far beyond being mere lenders to generating income from services, transaction fees, trading, money management fees, commissions and the like. Even before the Great Recession, noninterest income had been researched in literature with a focus on its linkages to profitability and risks. Executive looks at several aspects of noninterest income in Lebanese alpha and beta banks over the past few years.

From 2002 to 2014, the number of ATMs in Lebanon nearly trebled from 582 to 1,569 at yearend. These figures are not just impressive; they illustrate a major trend in banking — the pursuit of noninterest income as a way to diversify banks’ revenues. While most banking income still comes from old fashioned lending activities, income from nonlending sources has come to play a superior role over the last decade. 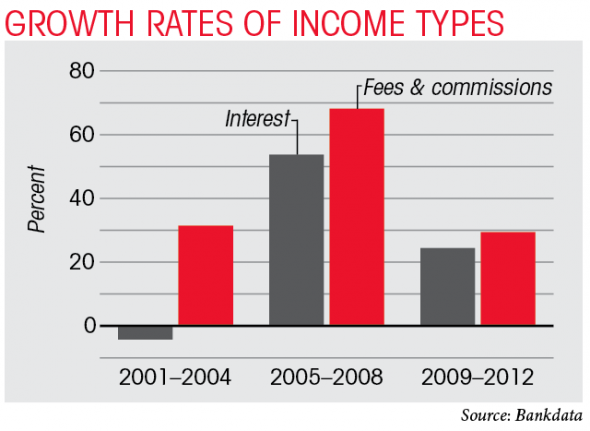 In total, Lebanese financial sector income attained double digit growth from 2002 to 2012, except during 2004, 2006 and 2007. Moreover, it surpassed the growth of net interest income for the same period, except from 2006 to 2008, where the latter reached its peak during 2006. Furthermore, the growth interest income (interest paid on loans) demonstrated lower levels compared to commission fees per four years.

Alpha banks have a competitive advantage over beta banks as the former held around 87 percent as a stake of assets out of the total Lebanese financial sector in 2012. Moreover, alpha banks offer investment banking services, besides their ability to select high quality clients and operate branches abroad. Research indicates that banks, whether alpha or beta, should seek to increase noninterest income in order to reduce risk — that is, diversify. Matthias Köhler, a researcher at the German central bank, examined the impact of noninterest income on the German financial sector and found that small banks should lean more on noninterest income, whereas larger banks with investment tools are already more diversified. He added that there is almost no correlation between noninterest and net interest income variables. Therefore, banks could be diversifying to become more stable by adding revenue streams from noninterest income.

Noninterest revenues have a unique habit of stabilizing the source of income, as opposed to interest income on loans, which is much more variable and reliant on market conditions. For instance, noninterest income will be much less affected by a shrinkage in GDP or interest rates. According to research from the Australian School of Business at the University of New South Wales, banks should seek diversification in noninterest income activities in order to make the banking system more robust in ‘high concentration’ countries (i.e. where banks have a competitive environment). They added that noninterest income can act as ‘ring fencing’ and can significantly reduce systematic risk. In 2012, the return on assets (ROA) for the Lebanese banking sector stabilized, but it lagged behind its record from 2010. While, it almost doubled from 2002 when it was 0.53 percent, reaching 1.01 percent during 2012, from 2010 to 2012, both alpha and beta banks showed a slightly decreasing trend in ROA. Both have sustained a yearly growth in total assets (mainly loans) but for alpha banks net profits plummeted during 2011, whereas for beta banks it showed shrinkage during 2011 and 2012. 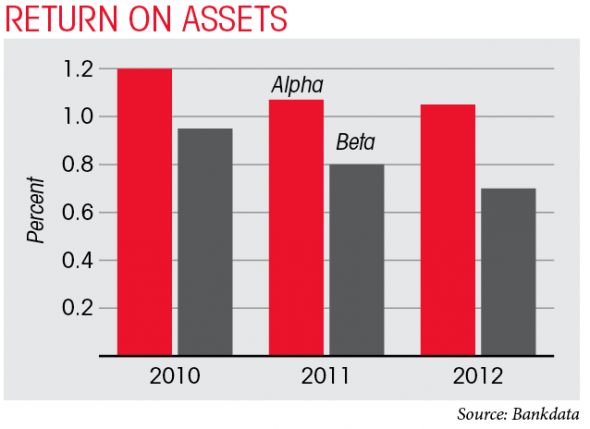 For the Lebanese banking sector, the portion of noninterest income to net revenue rose from 26 percent to 38 percent from 2002 to 2012. This trend not only assisted in lifting bank profits, it also gave banks the capability to diversify their sources of revenue and reduce risk. For alpha banks, the ratio dropped from 34.2 percent in 2010 to 32.9 percent in 2012. For beta banks, on the other hand, the ratio rose from 27.7 to 32.7 percent over the same period.

Certainly, there are vital differences in earnings between the alpha banks, which hold the large stake of assets, and beta banks, which constitute the mainstream of banks in Lebanon. 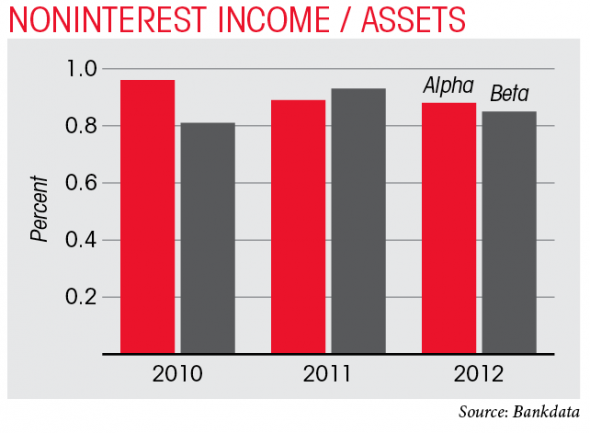 Noninterest expenses have expanded due to an increased number of branches and staff in both alpha and beta banks. For instance, the percentage of staff expenses to general operating expenses inflated from 51.6 percent in 2010 to 53.2 percent in 2012. Furthermore, the number of branches has increased by 13.2 percent from 2010 to 2012 for alpha banks. Hence, a common indicator of a bank’s expense supervision is its efficiency ratio. It measures how much produced income is generated by efficiently using the cost — that is, overhead expenses. Banks are more cost efficient if they have a lower ratio. This ratio stood at 60 percent for the entire sector in 2002. From there, it decreased slightly and stabilized at around 50 percent from 2010 to 2012.

The efficiency ratio for beta banks from 2010 to 2012 surpassed that of alpha banks. Unfortunately, both have reported an increasing trend of efficiency ratio, which illustrated a less cost efficient contribution.

These observations support some interesting considerations. First, the surge in utilizing noninterest income by alpha banks could make their earnings less elastic to changes in interest rates, all else being equal. Thus, stability can be viewed as a function of a bank’s ability to earn noninterest income and diversify more. The increase in noninterest income has rehabilitated revenue sources for Lebanese banks. These trends have been connected with record profits and embody the exploitation of new technologies. 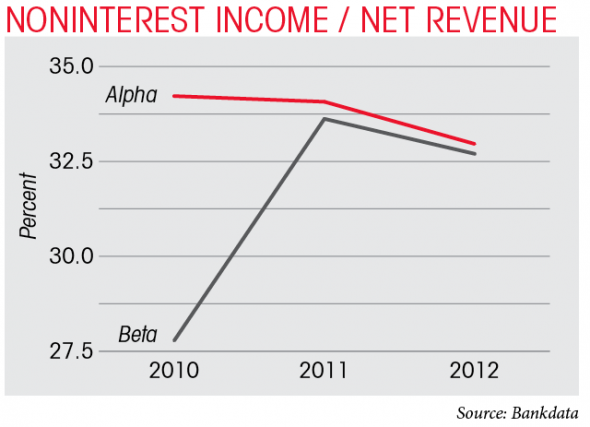 Second, beta banks’ relatively high dependence on income from loans could be problematic in the future due to increased competition. Alpha banks, for instance, could make use of new technologies and their affiliates’ locations to offer loans to the current customers of beta banks. Thus, the latter need to seek other revenue streams to have a stable income and substitute the reduced amount earned from lending.

A need to even the playing field