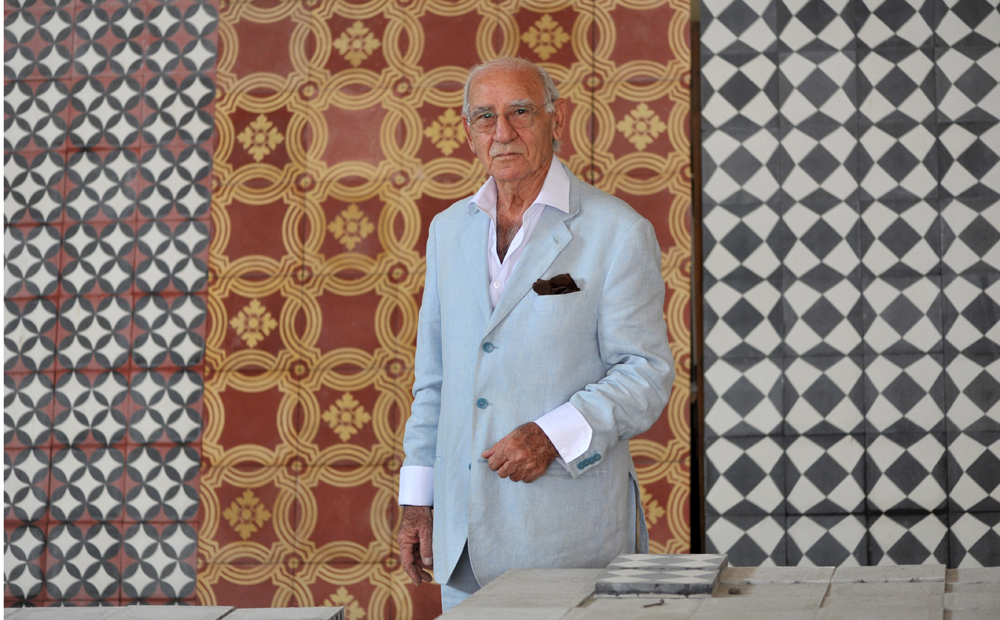 When you walk into any Lebanese home built between the early 1880s and the 1940s, the first thing you are likely to notice are the intricately designed and colorful terrazzo handmade tiles underneath your feet. In a time before carpets were fashionable, these cement tiles were the chic way to give a home a unique identity and some color.

Gradually, with the introduction of the more fashionable marble or granite tiles, and the machinery to mass produce them, the time consuming terrazzo style of tile making began fading into oblivion, taking with it the tile fitters and their tile laying skills. That was until 15 years ago, when Edgard Chaya found his great-grandfather’s tile laying tools. He began experimenting with them which eventually led to the formation of BlattChaya, a local company that produces luxury handcrafted colored terrazzo tiles for a global market.

Chaya recounts how he spent his career as a money exchange officer, starting his own offices — Chaya for Money Exchange ­— and helping develop the Syndicate for Money Exchangers, which he still honorarily heads. After a prosperous career in this field, and approaching retirement age, Chaya chose to sell his business when his children — Karim, a designer and the cofounder of Acid design and production firm; Maxime, the acclaimed Lebanese adventurer; and Caline — did not express any interest in following in his footsteps.

A few years into his retirement, and growing “tired from resting” as Chaya puts it, he found his great-grandfather’s tile making tools from the 1800s when the family had a thriving tile production business in Lebanon. “It took me four years to make my first tile exactly the way my great-grandfather made it. I was determined to succeed in this enterprise and thank God I did,” says Chaya, emphasizing that his business started as an interesting challenge for him and remains a pleasure to run.

Today, BlattChaya has profited from the rising international appreciation of handmade artisanal products and all things authentic. BlattChaya tiles not only adorn the floors of several Lebanese enterprises — Tawlet restaurant, Maison Rabih Kayrouz and Momo at the Souks to name a few — and private villas, they have been used by members of the Qatari royal family including the emir’s sister as well as restaurant and hotel owners in the Gulf. The tiles are also being sold to interior architects in New York, Boston, Geneva and Vienna.

Chaya says the Victoria and Albert Museum in London has also ordered his tiles for their newest extension as has a national museum in Saint Petersburg. “We have truly become an international name which surprises even me,” he says.

The reason Chaya is surprised by his international success is that BlattChaya has no offices outside Beirut and relies on word of mouth and their comprehensive website for marketing. “People visit our website, discover us and place their orders,” says Chaya, explaining that the website even has a simulator that allows the users to create their own patterns for the tiles and step by step illustrations of the tile laying process.

BlattChaya has 20 orders a week during its busiest time. The company informs customers that there is a two month waiting period before their order can be processed, due to orders already in progress. Because each tile is individually made by hand, with some tiles taking 20 minutes apiece, it is a long process and tiles are admittedly sold at a high price: “I sell each [set of] five tiles for $200,” says Chaya, pointing to a 20 by 20 centimeter black and white tile with a swirly pattern being pressed by the tile layer.

Chaya’s 12 employees, whom he prefers to call artisans as he feels the word better describes their precise and delicate work, have been with him since he started the company. “I have trained them to produce tiles my way, which is very different than in the market,” he says. Each artisan produces an average of 30 tiles per day but Chaya is satisfied with this production rate. He has also declined an offer to expand his production to Jeddah, where the potential investor wanted to mass produce the tiles using the latest Italian machinery, because “it wouldn’t be BlattChaya anymore.”

Besides being handmade and time consuming to produce, Chaya believes what distinguishes his tiles and makes them a luxury product is the emphasis on quality. “People sometimes take tiles similar to ours from the abandoned old houses, but back then they couldn’t achieve the quality we do today as the tiles were much thinner and their backside would show through when laid and washed,” he explains, adding that his tiles are six to eight millimeters thick — instead of two millimeters, as is the case with many older tiles — and so retain their color even when washed many times.

BlattChaya tiles are made with 100 percent all natural coloring pigments and are regularly submitted for deterioration tests at a laboratory at the American University of Beirut to maintain quality control. Finally, BlattChaya’s terrazzo tiles are certified according to British Standard 4131:1973, based on tests of hardness, thickness, water resistance and abrasion.

Though some have tried to replicate BlattChaya’s colors and style, Chaya believes people keep coming back to them because others cannot match their quality, which comes with a hefty price tag. “BlattChaya is not a financial investment; it is foremost a hobby for me. This is why people do not copy me: it does not make as much money as mass produced tiles and it takes a lot more time to produce, so it is not commercially viable,” says Chaya.

According to Chaya, for his company to be a profitable financial investment, he would need to sell it but retain creative and quality control for himself or his son Karim. “The company has grown larger than planned, and if someone comes to me and suggests that I sell it for a couple of million dollars, I might go for it. But the way I am doing it now, I like it, even though I know it is not profitable,” says Chaya, adding that, to date, no such offer has been made.

Chaya believes it is his passion for what he does and his insistence on high quality that leave both him and his customers happy. These have allowed him to reach this level of success and would allow Lebanon to become a luxury producing country, if copied. “The designer has to think of the quality and making himself a name before the profit margin,” he says admitting that it is difficult to find people with such characteristics.

His ideas of quality are strongly related to Lebanon’s heritage and traditions — when products were handmade and artisans took pride in creating a beautiful object. “I like to move toward the past not toward the plastic and today’s mass production. There is no quality anymore because quality is expensive and producers have their expenses to uphold,” concludes Chaya.