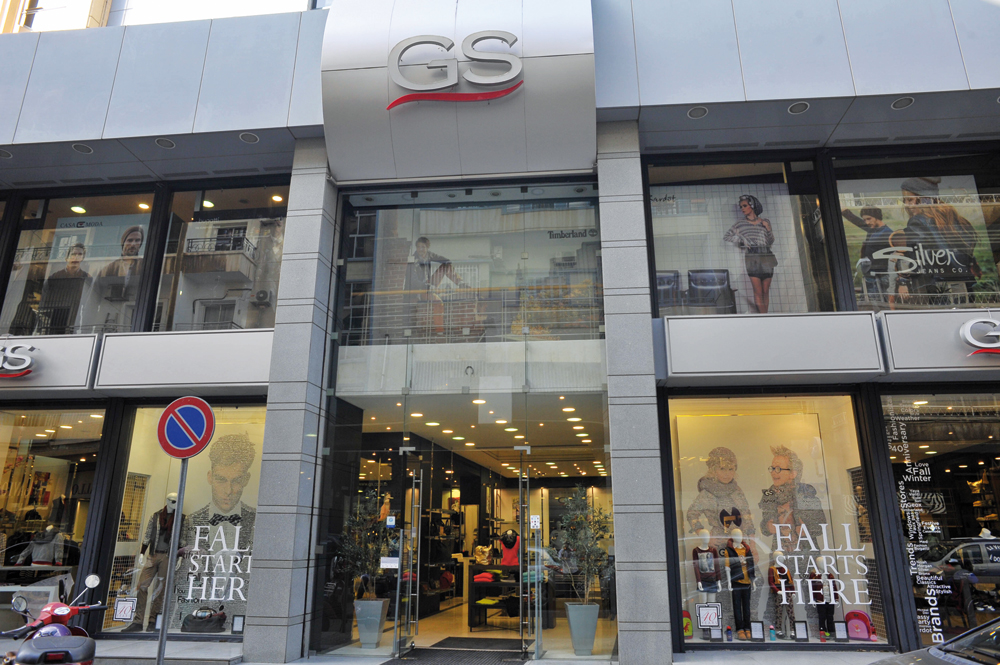 On the clouded horizon of Lebanese retail in 2015, the next quarter’s biggest bang in fashion retail may well be a new store in the, recently often maligned, Beirut Central District. Come this spring, Hamra Shopping and Trading Company (HST), best known for its retail brand Grand Stores (GS), will open a new retail space smack in the center of downtown Beirut, facing the Souks and 200 steps from the security cordon around Nejmeh Square.

With about 2,400 square meters (m2) in sales area, the new GS multibrand store will be the company’s largest. “This project consists of four floors, each comprising around 600 m2, and it will be our flagship store, taking us to the next era as a company and as retail[er] in Lebanon. We are designing and planning and working [so that] this store [can] really cement our presence in the retail market in the region,” says Jamil Rayess, current helmsman of family owned HST.

Costs for getting one of HST’s stores up and running in Lebanon, according to Rayess, range between $1,000 and $1,150 per square meter, giving the project an investment dimension in the neighborhood of $2.5 million. In the context of the HST portfolio of over 30 multi and monobrand stores between Tripoli and Saida, this new space will add about one fifth to their existing retail surface, which Rayess meticulously cites as 11,221 m2 at the end of 2014.

Of course the new GS store in downtown, even as HST’s largest project ever, amounts to a nice, rather than overwhelming, splash in the urban storescape when compared with the tens of thousands of square meters in new fashion retail surfaces that have come to market between 2003 and 2014 in prime areas, namely in shopping malls and the Beirut Central District.

Notably however, this national expansion in gross leasable area for prime retail has not been as smooth as depicted in shopping malls’ promotional brochures or the musings of experts like Simon Thomson, founder of the London based consultancy Retail International, who 10 years ago predicted the “regeneration of Beirut as a significant international retail destination city capable of competing with the likes of Dubai.”

Especially in downtown, where fashion mongers made it their ambition to make local and visiting shoppers wear down their heels in extensive strolls around Foch-Allenby and Minet El Hosn, this expectation has faltered time and again and retailers have of late either moaned over bad business or altogether refused to discuss sales results when queried by Executive.

Asked if he wasn’t concerned about the weak economy in general and turned off by the purported anemia in the downtown retail environment, Rayess has two answers. On the economy, he says, “We have never made any plan for our company based on a negative scenario for the country, because to do so would be self defeating and mean that we would be standing still.” HST instead approaches the future by “planning on [a] day-to-day basis, hoping that things will [get] better,” he enthuses.

As for downtown’s troubles, he comments that the negative perspective “is not all true. I may not have the same presence in this area as some of my competitors in terms of size,” he continues, “but I have two retail shops in the central district. I have been in this area for 11 years now and can say that it is not all bad. There are a lot of retailers that are not satisfied but there are several retailers that are satisfied and are growing their presence in this area.”

Another facet of the company’s confidence in the Lebanese market is a strategy mix that is built upon HST’s identity of being a Lebanese retailer whose source of success is the importing of well established but not extravagant foreign labels. According to Rayess, HST was established under this formula by his father 40 years ago and has developed its middle of the road approach into an art form, tuned to the Lebanese taste. It can compete with local outlets of international monobrand chains, whether they are recent arrivals to the Lebanese market, such as H&M and Marks & Spencer, or have been present for years, such as Mango and Zara.

The strategy mix involves marketing, purchasing, pricing and positioning. The fairly aggressive marketing activity entails diversified outreach activities ranging from common tools, such as discounts and seasonal campaigns, to instruments that are sparsely used in Lebanon, such as an in store magazine and a mobile app.

Purchasing and exclusive franchise representations are the next building blocks in the business formula. This includes franchise partnerships with four brands — Timberland, Springfield, Geox and Bossini — which HST offers in monobrand stores and a much larger portfolio of about 100 brands which the company’s team of buyers obtains from foreign suppliers. Sold in GS stores, this portfolio consists of 90 percent exclusive representations, Rayess says, and 13 to 14 professional buyers in the HST team are constantly on the road to source collections from trade fairs and suppliers “all around the world.”

Although the HST product portfolio includes two house brands where items are produced by contractors in China, Turkey and Lebanon, these brands are used to fill supply gaps and their contribution to the bottom line has been shrinking to the point that they recently accounted for less than 2 percent of turnover. “We are dealing with our house brand not to maximize margins but for a different philosophy: we sometimes fall short of a specific product, an item that was en vogue but which we were unable to acquire from one of our suppliers. In such cases, we take this product and tell our contract manufacturers to produce it for us,” Rayess says.

Pricing is mainstream and conservative but orientated to match the pricing in the home markets of the manufacturers whose brands are in the portfolio. This translates into a policy of combining price comparability with limiting discounts.

Dedicated bargain hunters can find products such as a pair of Geox shoes at this or that Beirut retailer, but when it comes to comparing prices displayed at an HST store with those shown internationally for the same product, customers who go to the — today very small — trouble of checking those prices online will rarely encounter a significant differential in favor of buying outside. This is because Rayess tends to price a Timberland product according to the US market and a Springfield product according to the Spanish market, etc.

He says, “Let me not enter price debates with my customers, who can confront me right there in the store with what my product costs in another market. So let me price it right according to the price in the country of origin of this product. Most of the times, the country of origin is where the product is sold at its cheapest when compared with the remainder of the markets.”

This correlates with a longstanding practice to stay away from the Lebanese market’s flashiest sales methods. “In the history of HST or GS or any of my brands, we never did 70 percent discounts. I price my products so that the lowest I can go in terms of discounted prices is 50 percent,” Rayess explains. With markdowns from the regular retail price being limited in this way, the company seeks to engender customer loyalty and avoid a behavior where customers delay purchases in order to wait for the bigger discounts.

On the accounting side, the company has a policy of aiming for stable earnings before interest, taxes, depreciation and amortization (EBITDA) margins. “We are trying to work with an EBITDA of 10 percent, sometimes successfully so, sometimes less. Less successful means [achieving] EBITDA [that is] lower by half a [percentage] point,” Rayess says.

Refusing to disclose data on the turnover and bottom line of the HST retail business in Lebanon and other countries, he only volunteers the information that “our company and its affiliates have been growing every single year since 1974, with year on year growth in terms of turnover and gross profits.”

The company has set its same-store turnover growth targets for 2015 at 6 percent, and expects new points of sale will add to overall growth in gross revenues. These new points of sale include not only the upcoming flagship facility in downtown Beirut but also new stores in Iraq, of which one is scheduled to open in June in Suleimaniya, and Jordan, where a 500 m2 store in Amman’s Abdali district is planned to launch at the end of the year.

Iraq, with five stores, and Jordan, with three stores at end of 2014, are the two regional markets where the expansion of HST has been successful. But the company is still recovering from its exposure to Syria where it began an enthusiastic rollout of stores in 2008. Opening six stores in three cities between 2008 and 2010, the decision to close all outlets and put activities on hold had to be made in 2011, the Syrian conflict thus having a “big” impact on HST, Rayess admits.

Rayess, who stepped up to the position of general manager at HST in 2010, nonetheless emphasizes that he still attributes great potential to the Syrian market. He is not deterred by the challenges of operating in a difficult and extremely complex environment and still has dreams, such as developing a fully fledged fashion brand.

This venture, to be created by HST with full brand philosophy, packaging and everything else, has been on the drawing board “for a good while,” according to Rayess. It has moved between pipeline and drawing board without having been scheduled for implementation due to the financial requirements of investing several million dollars and because of the even greater challenge of building a team that can develop and run such a brand.

Once the family run company establishes itself regionally, it may consider a public listing, says Rayess, noting that “We are a family business of the 21st century, so we are not looking specifically for any of our children to take over or hold the reins.”

All things considered, this leaves HST looking like a firm that is not out to reinvent fashion or overthrow the global order of retail, but a company where conservative and ambitious elements are in a balance. Their corporate passion is conveyed by Rayess as not being focused on the amount of cash that can be generated from a customer. “I never look at people this way. I always look at what they are wearing and I always feel a sense of pride if an item they are wearing was purchased from one of my stores. I don’t care whether it is a small bracelet or the most expensive suit I carry. I look at them with satisfaction because I was able to have them enter my stores and purchase a product.”