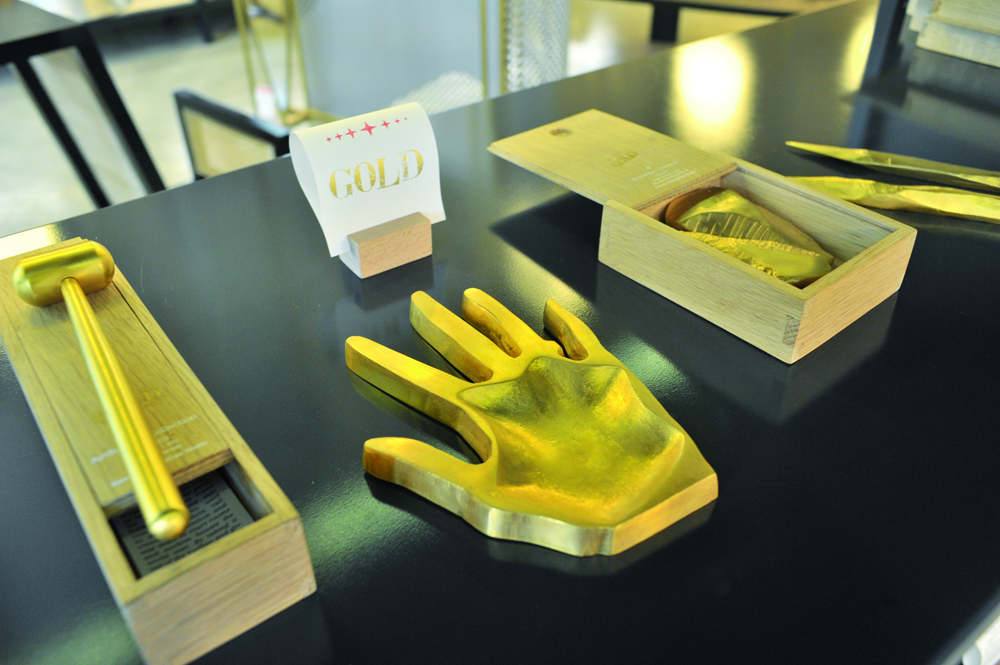 After 10 years of collaborations with various Lebanese craftsmen, Karen Chekerdjian — a well known luxury furniture and home accessories designer based in Lebanon — is about to give up on the country’s craftsmanship. She is seriously considering outsourcing her designs to be produced abroad.

Chekerdjian started her career abroad, as a designer working for big names in furniture design such as the Italian brand Edra. In 2000, she came back to Lebanon and worked as a prototype designer before deciding to collaborate with various local craftspeople to develop a brand of her own.

Chekerdjian recounts how challenging her first experience collaborating with a craftsman was: “I tried to make him change his style of design and it was very difficult. His style was very traditional in that he used to make huge [brass] trays with calligraphy and lots of graphics on it. Even though it’s beautiful, it’s something you cannot sell anymore today and needs to change,” she says.

For the first year and a half, Chekerdjian worked on pattern reduction with the craftsman. Eventually, the craftsman’s good eye and taste helped him adapt to her modern designs. Chekerdjian saw this evolution as a natural part of the design process and her collaboration with artisans. When he was ready, Chekerdjian started developing the products’ shape, taking a design or pattern that the craftsman knew and using it on a new product or shape, thereby modernizing it.

Ten years later, Chekerdjian considers handmade brass her major collection and is still working with the same craftsman and his family. “Most craftsmen in Lebanon have an ancestral way of working where they learn from their forefathers, so sometimes when I gave my craftsman drawings, he would remember that he did the same type of thing with his grandfather. This shows that a long time ago, people had simpler tastes and now there is a return to simplicity,” she says.

Chekerdjian describes her collaboration with the brass craftsman as her “best and biggest” to date, but the partnership was not problem free. One difficulty was that since craftsmanship skills are not formally taught, the artisan she works with did not know how to read technical design drawings.

Another obstacle was that the quality of the work produced was not up to luxury standards on the first attempt. Chekerdjian would have to send the work back twice before it reached the quality she wanted. “This is because they are not usually asked for quality work. The civil war caused most of our craftsmen to slowly lose their skills from lack of practice, and now many producers have the careless attitude of trying to cut corners, which you cannot do at all with luxury products,” she explains.

Having succeeded in developing her brass collection, Chekerdjian started looking for other types of craftspeople to collaborate with — but this is where the challenges compounded.

Chekerdjian tried to work with marble, but the marble artisans did not have the necessary skills and machinery to produce the drawings she gave them. She also briefly worked with ceramic products, but explains that the woman she was able to find told her the products were taking too much time and quit. Because of the scarcity of resources and the lack of a registry of craftspeople in the country, she was not able to find another person who works with ceramics.

For a year and a half, Chekerdjian worked with an artisan in Tripoli who styles handmade glass, but she says this craft has several limitations in Lebanon. For instance, she claims, the country’s craftspeople only know how to work with recycled glass — which she says creates bubbles, cannot hold hot water and only comes in the brown, blue and green shades found in Lebanese bottles. Given the declining demand for handmade glass in the country and the gradual deterioration of this craft, the glassblower did not see the value of his work anymore and instead opened a more economically viable minimarket.

Chekerdjian says she offered to pay him more money and he was offered support from the Azm for Crafts foundation in the form of a modern German glass blowing oven, but he asked for a minimum of 2,000 orders to reconsider. While this number made economic sense, Chekerdjian explains it was not a number she could provide him with since the Lebanese market is small. She has now sent someone on her behalf to study the possibility of producing glass in Italy.

Chekerdjian speaks of her experience with the glassblowers with a hint of frustration, lamenting how there is no support from the government to help them develop their skills. She gives the example of Egypt, where glassblowers were trained through a commission from the embassy of the Czech Republic. “In Egypt, they are 10 times better than us because they were trained, and because the government wanted to develop this skill,” she says, adding that private initiatives are not enough and support is needed at the ministerial level.

While there are efforts to support all kinds of craftspeople, they remain local and limited to small commissions by NGOs, explains Chekerdjian. “It’s not organized and nothing is really happening as there is no continuity,” she says.

If the situation remains as it is today, Chekerdjian thinks that the community of artisans will be forced into other jobs. She gives the example of her copper craftsman, who used to get 70 percent of his work from the Gulf citizens who came to Lebanon during the summer. With tourism waning, he has been asking her for more work in order to make ends meet.

Chekerdjian believes the best way to support and develop the artisan community is to have the government create an association for them. The association would help its members get funding, find jobs and register for training and skill development. “It is very important for all those people who can do something with their hands to have a base, to have somewhere they can go to, and where we as designers can go to produce and manufacture our creations,” says Chekerdjian. She adds that had there been such an association, it would have been much easier for her to find artisans instead of relying on her individual efforts. The current situation has left her short of skilled people and pushed her to seek craftspeople abroad.

Lebanon’s luxury designers get minimal support as well and work on an individual basis with nothing connecting them to each other. Here again, an association for the creative community in Lebanon would be beneficial, but Chekerdjian says that while there has been a lot of talk about this, it has not been backed up with action. “We all have our problems to resolve and none of us has the initiative or the time to do it,” she says, speaking of creating a designers’ association.

Chekerdjian finds hope in the jewelry industry and in the talents of the women who do embroidery. She is now working with both.

Chekerdjian also says she will be kicking off her efforts to export her line to high-end alternative shops in the “wider global market” by January, and will focus on her embroidery, wood, metal and brass collections for that. “We currently export a little bit to Turkey and Italy, and have small shops in Los Angeles and London, but the quantities are not yet significant. We really have to work on the whole collection,” she says.

Regarding Lebanon becoming a luxury producing economy, Chekerdjian has many questions but no definite answers. “If there is real work to develop the skills of craftsmen, we could be a luxury producing market because we have designers with exceptional creative talent in Lebanon, especially in the new generation. But what’s next? How do we do that? Who would help and invest? Who would put the energy to create this association and train the craftsmen? I don’t know.”

For her part, Chekerdjian is now seeking artisans abroad.