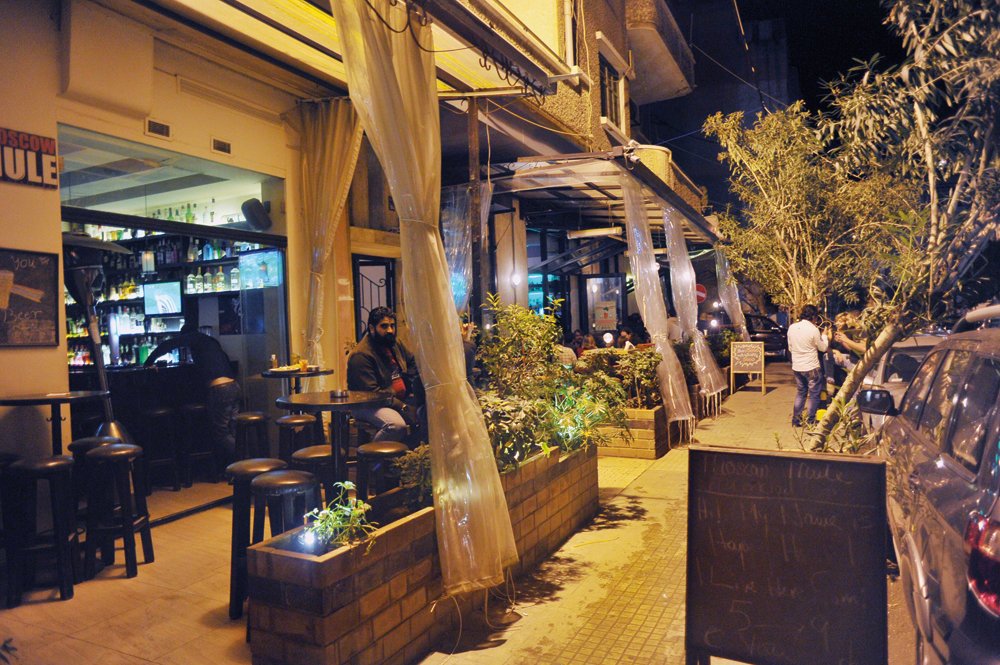 In the past, security concerns have hampered the growth of nightlife areas (Greg Demarque | Executive)
Reading Time: 6 minutes

When Lebanon’s Civil War ended in 1990, Hamra was at a standstill in terms of nightlife, with almost no pubs or restaurants in operation on Makdessi, the street just north of the main road. In 2005, the roller coaster ride began its slow ascent with the opening of De Prague, a cross between a pub and a coffee shop, located next to HSBC bank. It was followed two years later by Le Rouge, a French restaurant.

But it was with the opening of Danny’s in 2009, a pub on what is now called the Alleyway, the narrow street connecting Makdessi to Hamra’s main road, and the neighboring outlets shortly after, that the street really took off. In less than two years, 32 pubs or restaurants had opened on Makdessi Street and its immediate vicinities, excluding Hamra’s main road, and it was considered a top destination for nightlife.

“What made Hamra so successful was that everyone knew it. It wasn’t a local destination but a national one. I had people coming to my venue Clé — on Wardieh Street, perpendicular to Makdessi — from Jounieh or Metn, saying that this was the first time they come to Hamra but they had heard so much from their parents about the nightlife here in the 1960s that they wanted to see it for themselves,” says Ussama Makarem, CEO of Makarem Group, which operates BistroBar on Makdessi Street among other hospitality venues in Beirut.

Although Makdessi Street began to lose some of its luster in mid 2013, when the street became too crowded and the outlets on it too loud, the venue operators Executive spoke to say Makdessi Street’s plummet began in earnest in early 2014, mostly because of the country’s security situation.

Makarem recalls that 2014 started off on the wrong foot, as suicide bombings rocked the country, including at a Raouche hotel, and security forces raided the Napoleon Hotel just off Makdessi Street. “Political issues really affected the street and many people got scared to come here and cut it off completely,” he says.

Charles Frem, owner of Garcia’s in Hamra and Central Station in Mar Mikhael, also believes that the security situation, and specifically — according to him — the rumors which circulated regarding a possible explosion in Hamra, scared people from coming to Makdessi.

Those interviewed for the article all blamed the high concentration of beggars on Makdessi Street as another reason people started going elsewhere. “The other factor that also played a role in the slight decline of the area is, unfortunately and not to be prejudiced, the beggars that flooded to Hamra from the conflict in Syria,” says Saadi Hamady, owner of Poly Project Inc. which operates Bricks on Makdessi Street. “It is true there are beggars in many other areas in Lebanon but there was a high concentration in Hamra and Makdessi which annoyed the local clients who then preferred to go elsewhere,” said Hamady, adding that, on a positive note, the Syrian residents residing in the area helped support many of the businesses on the street, including his own.

In parallel to people growing uncomfortable with the climate surrounding nightlife on Makdessi Street, other areas such as Mar Mikhael or Badaro — which were similar to Makdessi initially, but newer and therefore more exciting for some — brought competition, according to Frem. Since the number of people living in Lebanon who can afford to go out is not that high, Makdessi Street understandably felt the strain. “We are all competing for the same piece of cake and that is why it is [survival of] the fittest in management, cost, quality and service,” explains Frem.

Hamady believes that the declining economic situation, both globally and locally, is also to blame for the decreased activity, not only in Makdessi but across Lebanon as well. “We definitely have less business than before but you have to understand people are living from paycheck to paycheck,” he says, adding that while there are venues that are able to attract wealthy customers who can go out every night, he is talking about the average, middle income Lebanese.

An indication of this difficult period is that, according to Anis Rbeiz, the real estate agent who brokered most of the rental deals for the Makdessi outlets, around thirteen venues on or in the immediate vicinity of Makdessi Street shut down within the last two years. Rubeiz also added that he had difficulty renting out these venues again.

On the way up

But nightlife on Makdessi Street is not over yet — in fact, it is slowly going uphill again with the opening of the Courtyard, a cluster of four resto-pubs under one roof just next to Alleyway, in October 2014.

According to Makarem, who operates BistroBar, one of the four venues in the cluster, all the venues are full on weekends and quite busy during weekdays. BistroBar, as an example, has a capacity of 120 people seated during the day and 220 people at night, when it turns into a bar style environment. “The new cluster, with its high ceilings and open design, has created some extra traffic to the area, but we have to see if it will be able to compete with the rooftops when they open in the summer,” says Frem.

Meanwhile, Hamady also agrees that the Courtyard has brought increased footfall to the opposite end of Makdessi Street, but says that Bricks has its own loyal client base and does not really depend on that extra activity. “We might get extra clients if the whole area is booming, but that would be the cherry on the cake, not something we would depend on,” he says.

[pullquote]“Makdessi … [is] no longer a national destination which people come to from all areas, like Mar Mikhael now is, but a regional one”[/pullquote]

Catering to the residents

While Makdessi Street is on the rise again, the nature of its clients is changing. “Makdessi is catering to the residents of Hamra and the close surrounding areas. We are no longer a national destination which people come to from all areas, like Mar Mikhael now is, but a regional one,” says Makarem.

The purchasing power of those who frequent Makdessi has also changed according to Frem. “Makdessi now attracts those who get one drink each and appetizers to share. The places are indeed full but they are not making money,” he says, adding that this does not apply to some venues in the Courtyard which are attracting the big spenders. The average bill for a small dinner and two rounds of drinks for two people at Palma, one of the outlets in the Courtyard, is approximately $100 while a similar order at the other end of Makdessi Street would cost you half that amount.

As such, Makarem explains that his business approach to BistroBar was — keeping his target clientele in mind — to create a casual and laid back venue which can be enjoyed both day and night. BistroBar has a full French–Italian menu, which includes a salad bar during the day and live performances three nights a week. “It is a place that can be enjoyed by all age groups at any time,” he says.

The food and beverage sector on Makdessi Street specifically, and in Hamra in general, does indeed have its ups and downs but all those interviewed insist that “Hamra will never die.” Being in close vicinity to AUBMC, two major universities and two international high schools — not to mention numerous businesses and banks — ensures that the area will have a steady flow of visitors, according to Frem and Hamady. “A lot of my customers are university students or foreign professors in these institutions who usually live around the area,” says Hamady.

Perhaps a show of good faith in Makdessi Street is that hospitality projects are still being developed there. A hotel and furnished apartments project facing Bricks is nearing completion, and Caramel, a boutique hotel with a restaurant bar called Propaganda in its lobby is under development by Frem himself and set to open in August (though Frem admits that he already owns the hotel and had begun the investment in its renovation before 2012).

Hamady speaks of the recently founded Makdessi Traders’ Association which organized the Makdessi Street Festival last April and are organizing another edition for this May with the aim of bringing added activity to the street. According to Hamady, they are also collecting money from the businesses on the street for improvements and beautification projects, which include fixing the pavement and municipality street lights and adding some greenery. “They are working very seriously and have the support of the municipality and governor,” he says.

Whether riding high during 2010–2012’s peak years, or on a downward slump with half empty venues — or even something in between like we see now — Makdessi Street is still hanging on.