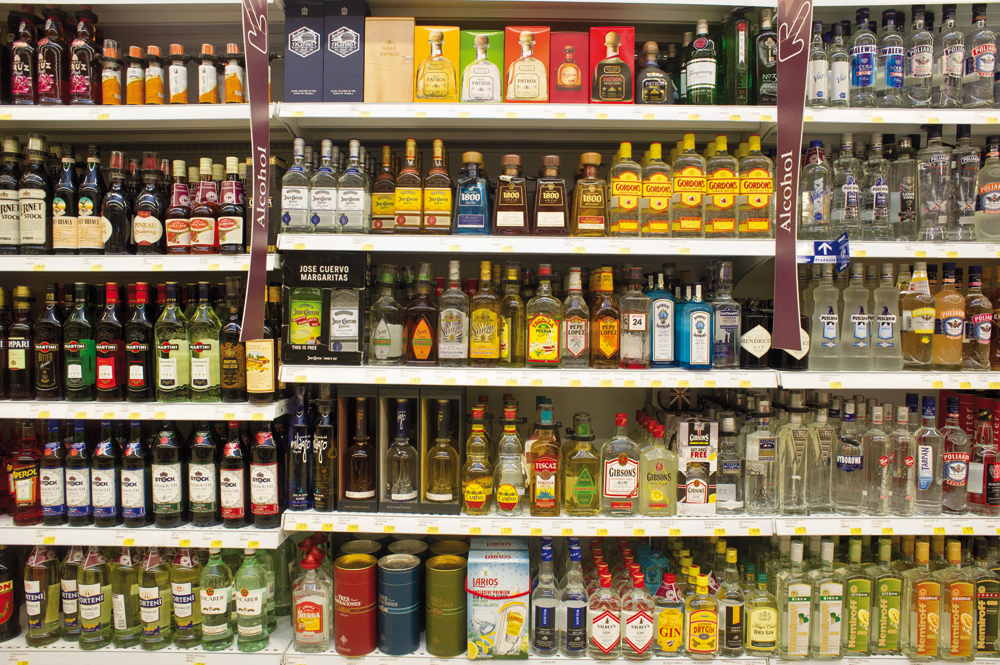 Whether enjoying a glass of single malt whiskey after a long day, celebrating a special occasion with champagne, or simply catching up with friends over a couple of cocktails carefully prepared by a mixologist, it seems that alcoholic beverages constitute a part of life for many of us. While some other industries, such as the hospitality or retail industry, saw a decrease in their overall revenues in 2014 when compared to 2013, the spirits industry saw a growth in that period, aided by an active end of 2014.

According to Naji Hmouda, business manager at Neo Comet, the spirits distribution company which is part of Fattal Holding and distributes Bacardi, Martini and Dewar’s, among others, 2014 started out even worse than 2013 for the spirits industry from a macro perspective, due to the assassination of former Finance Minister Mohamad Chatah. The attack occurred a few days before New Year’s Eve 2013 and caused many people to cancel their celebrations, which in turn led to an accumulation of stock for many spirits.

Carlo Vincenti, owner of G. Vincenti & Sons who says his spirits portfolio includes Poliakov vodka and Label 5 whiskey, also considered the market at the start of 2014 to be tough. This was due to the continuing effects of the economic and social difficulties that have affected Lebanon, including a combination of the repercussions of the Syrian crisis and the dwindling economic capabilities of the Lebanese consumer, who has become almost the sole client of the hospitality sector given the lack of tourists, according to Vincenti.

Yet, Vincenti says his company added the Beam Group — which includes Jim Beam bourbon and Teacher’s whiskey, among others — to their portfolio in 2014. The company managed to double Beam Group’s volume of sales in Lebanon from 2013, making 2014 a good year overall for the Vincenti Group.

According to the spirits distributors Executive spoke to, the summer season was also somewhat sluggish in terms of sales but took a sharp upward turn during Eid El Fitr. Sales peaked during the holiday season in November and December 2014, which usually accounts for 40 percent of a spirits distributor’s annual sales. Hmouda explains that, once a sense of security and stability was restored in Lebanon towards the last quarter of 2014, they felt the positive effects in their profits and were able to make up for most, if not all, of their losses of the first half of the year, calling December 2014 a “phenomenal and amazing” month, comparable to some of the best Lebanon has seen in the past 10 years.

Etablissements Antoine Massoud (EAM), distributor of SKYY vodka and Jose Cuervo tequila, saw a growth of 15 percent in spirits sales in 2014 as compared to 2013. This was thanks to a strategy where EAM let go of some brands in their portfolio and added new ones, all the while “capitalizing on a few but bigger and better brands than we used to represent in the past,” says Anthony Massoud, managing director of EAM.

Diageo, the multinational alcoholic beverages company and spirits producer with a $73.3 billion market capitalization, is mainly known for Johnnie Walker, which held 31.6 percent of the market share in whiskey consumption in Lebanon in 2013, according to the International Wine and Spirit Research (IWSR). With their regional offices now in Lebanon, Diageo considers the country to be “the showcase of the Middle East and the leader of nightlife in the region,” according to Ziad Karam, MENA corporate relations director for Diageo.

In fact, the company witnessed solid growth of slightly more than 15 percent, according to Jad El Osta, IMC general manager at Diageo. “We basically followed the consumers’ taste and location, offering them a Diageo brand for every income level and every new drinking trend and location,” says El Osta.

What the Lebanese are drinking

Not all spirits are created equal and some types had a better year than others, according to the brand representatives and owners Executive spoke to. After skyrocketing for the past five years and increasing by 13.4 percent between 2008 and 2013 according to the IWSR, vodka consumption among the Lebanese in 2014 either stagnated with some brands or increased at a normal pace with others. “Consumers are looking for more complexity in what they drink and, whatever you do, vodka will always be considered a mixer,” says Vincenti.

The exception to this trend seems to be the vodka brand Grey Goose, with Hmouda saying that, “Fattal had excellent double digit growth in the vodka category in 2014 driven by the deals we did and the brand Grey Goose, but I cannot say it is the same for everyone.”

Whiskey, the third most consumed alcoholic beverage in 2013 after beer and mixed drinks according to the IWSR, remained the most consumed spirit in Lebanon by far with 471,000 nine liter cases purchased in 2013, almost double the second largest category of spirits consumed that year, vodka. Within that category, there was growth in the single malt whiskey consumption, though the volume remained small when compared to overall whiskey consumption, according to Hmouda.

This increase was driven mainly by the global trend towards single malt consumption and by more maturity and awareness regarding the quality of spirits among the Lebanese consumer. Vincenti saw double digit growth in their single malt categories and Diageo, which owns 28 malt distilleries in Scotland, believes they managed to attract many consumers in this category through their strong market presence and wide portfolio of malts.

EAM took the single malt trend to another level by opening the Malt Gallery in December 2014, a high end spirits concept store with a focus on malt whiskey. “We saw that there are a lot of wine stores but no conceptual liquor stores. Our aim is to educate the Lebanese consumer on this trend and develop the premium category in Lebanon through whiskey classes, dinners and trainings” says Massoud.

Closely related to the growth of single malt is the rising popularity of mixology, i.e. mixing cocktails using premium spirits, another global trend that Lebanon is now embracing. “The trends are moving towards cocktails and the good thing is that many of the bar owners are taking it very seriously and are training their staff in presentation and mixing,” says Hmouda, adding that such premiumization brings a better, more specialized type of business to the distributor, while also lending diversity and more complexity to the spirits sector in Lebanon.

Capitalizing on these trends and on spirits consumption in general necessitates that each distributing company develop a competitive growth strategy which plays on their brand portfolios’ strengths. “We players try to find where we are competitive and where we can add value based on these trends. We at EAM are reorganizing our strategies and portfolio and implementing this with our trade partners,” says Massoud.

Sustaining a strong market share and ensuring annual growth of a company’s brand consumption requires targeted and specialized marketing such as visibility in venues, sponsorship deals with venue owners and special activities and events — referred to as below the line advertising — as opposed to mass media marketing through traditional media channels or above the line advertising, explains El Osta. “We only began to spend on above the line marketing last October but in marketing below the line, we are very strong and present, considering such activities volume generators. Instead of reaching the consumer through TV ads, we reach them directly in the venue through the bartenders or shop owners whom they trust. The market is moving from the bulk towards the differentiated and specialized,” elaborates El Osta.

Other distributors are also focusing on below the line marketing, with Massoud attributing 25 percent of what he calls their trade marketing budget to secure their brands’ visibility in hospitality venues through sponsorship deals and quality presence in places such as Skybar where they are the main vodka partners.

According to Hmouda, Fattal’s marketing budget is mainly being spent on below the line marketing. “In a better situation, half of that budget should be on advertising, but today with all the pressure on maintaining relatively reasonable prices, some of our marketing investment is going behind that. Until such times when we have steady growth, we will look back at our strategy of spending to have more consumer and image communication rather than below the line marketing,” he says.

Challenges in the on trade and off trade sectors

Despite 2014 being a relatively good year for spirit vendors, alcohol distributors do not operate in a vacuum and the challenges facing the Lebanese economy certainly had an effect on their business.

Regarding the on trade sector, or the hospitality venues, Vincenti explains that one issue they had to deal with a lot more in 2014 was delays in payment from hospitality venues, which were having a difficult couple of years due to the economic situation in Lebanon. Hmouda says Neo Comet has also had to deal with more deferred payments over the past three years, calling the situation “dangerous” but saying that this year was better than the two preceding it.

“New venues open at a very fast rate in Lebanon and close at an equally fast rate as there is no regulation or study into their financial feasibility. We [spirits distributors] end up losing the most as we deal with these operators who can close down anytime if their business fails, sometimes still owing us money,” complains Massoud, explaining that they have become cautious in who they deal with and are focusing on the big operators in Lebanon who they know are sufficiently reliable.

Such a situation has led to low morale both among hospitality venue owners and their distributors, who themselves have their payments to make and their quotas to maintain with the companies they represent.

The off trade sector, or the retail stores, according to the distributors interviewed, account for the bulk of their sales and generally constitute a more significant market for them as opposed to the on trade sector. The off trade sector saw an increase in their spirits sales, according to Vincenti, because people consumed more alcohol at home in 2014, especially around the New Year which saw many celebrations held at home. “This is a good thing for us because when people consume alcohol at home, they consume more,” says Vincenti, adding that reaching the consumer is easier in the off trade division as all the brand choices are right on the shelf, as opposed to a bar which is influenced by exclusivity deals with distributors.

The off trade still represented challenges to the spirits distributors, namely due to the fact that the number of retail outlets increased significantly in 2014. “Supermarkets in Lebanon are cannibalizing each others’ business through prices which are eating away at their profit margins. Their businesses are not operating in a healthy way and when this happens, I am the one with the supplier who has to pay for this in one way or another, by either delaying payments or granting them additional requested terms such as discounts or marketing incentives,” says Vincenti.

Whether in the on trade or off trade sector, Lebanese will continue wanting to have a good time and so, as long as this attitude prevails, spirits distributors and producers in Lebanon will always have a reason to toast.