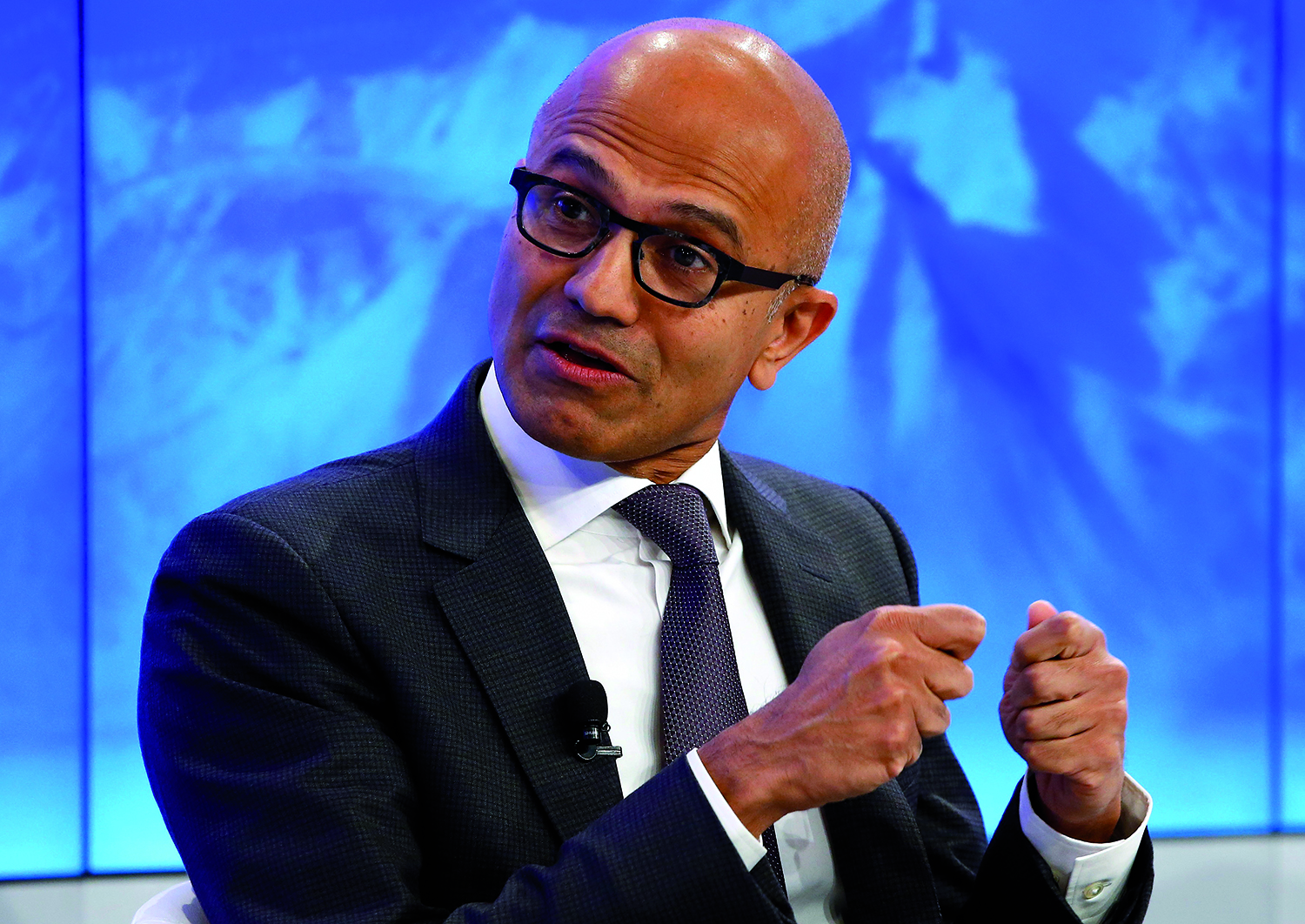 Satya Nadella, CEO of Microsoft attends the session “The Transformation of Tomorrow” during the annual meeting of the World Economic Forum in Davos, January 2016 | Getty
Reading Time: 5 minutes

Three of the world’s top five companies by market value – Apple, Microsoft and Google – today run like nations unto themselves. Each has a utopian headquarters – home base for an army of employees with global reach and influence. Their aim is wealth creation both for employees and shareholders, but their products also help businesses grow, adding value to the global economy. Increasingly, it is the un-elected leaders of these influential entities who are changing everyday lives in the far-flung corners of the globe. The failed or failing states in our region should look to the boardrooms of Apple, Microsoft and Google for inspiration on how best to develop rather than pinning our hopes on mimicking the ballot boxes in the United States or Europe.

If properly calibrated, an authoritarian system can be a good thing. For proof, we can look to the value creation in the United Arab Emirates, Qatar and Singapore. These countries are arguably akin to overprotective and undemocratic corporates, duplicating prosperity instead of poverty and driven by meeting the needs of what business people require. Creating investment-friendly climates not only draws in the big international players, but also helps local enterprises flourish and gives hope to young graduates eager to begin climbing the corporate ladder.  Contrasting the success these three jurisdictions can boast of in the past quarter century with Lebanon – where progress on this front has been continuously thwarted by warlords turned politicians keen on increasing ethnic, religious and geographic segregation – makes the solution to our chronic emigration problem all the more clear.

After an inside look at how the new world order is being shaped, I’m all the more convinced that this new corporate-nation model is the key for unlocking growth in the Middle East and beyond.

When I paid a visit to Microsoft’s Redmond campus last November, it became clear how this new political and cultural form has evolved. The campus is an ideological epicenter for Microsoft’s 100,000 worldwide staff – a truly diverse citizenry comprised of an educated, innovative and creative class. Space on the campus is designed in a way that brings everyone together to work as one. Like its competitors Apple and Google, Microsoft knows that isolating employees and pitting them against each other will not build a great company.

Life on campus revolves around the Holy Land – the famed garage where the company was founded. Microsoft’s Holy Land does not inspire competition and conflict. It re-enforces the company’s mission by being a space that fosters innovation and creativity. It is through the garage, Microsoft’s visitors are told, that the company has managed to keep a startup culture. Kathleen Hogan, chief people officer, explains that merit is the only qualifier in this multicultural environment. Productivity, she says, is assessed by the watchful eye of higher management. And while the atmosphere and dress code screamed “carefree”, CEO Satya Nadella was omnipresent. Nadella’s name pops up in every speech and presentation. Everyone walks in step with the leader’s vision of a human-centric approach to problem solving (coincidentally the basis for new product development).

Jeanette Wing, corporate vice president for research, explains that all new Microsoft solutions are intended to let individuals and corporates do more. At the heart of how the company does this is abductive reasoning – or using human behavior to inform product development. It all starts by identifying possibilities – the “what if”s, as Wing puts it. Using an iterative approach infused with creativity and innovation, engineers and scientists studiously observe client instincts, wants, needs and behaviors when creating something new. Helping inform this process is enhanced data collection gleaned from each and every Microsoft device.

Wing stresses that failure is not reprimanded at Microsoft. Product development teams are encouraged to iterate their way to workable solutions. And once those solutions begin looking viable, there is no shortage of cash to incubate and develop them. All of this is geared toward helping Microsoft beat competition to the next tech breakthrough. And it is not unique to Microsoft. Companies in all sectors are increasingly realizing that any new product or service must incorporate client wants and needs from the very beginning. More and more, companies are designing experiences instead of products alone. With their entrenched bureaucracies and resistance to change, national governments could never be this nimble or successful in service provision.

While the 1990’s fear of humanity becoming an identical hoard of robot-like creatures is being replaced by the excitement over robots that are becoming more human, serious ethical questions remain. Reinventing productivity for an increasingly mobile client base using multiple devices requires an intelligent cloud. “[It] could do things for you and increase your productivity that is constrained with time and progress,” according to Tim O’Brien, general manager  of global communications. In an attempt to mitigate the privacy and data security risks that come with this cloud, Microsoft gives control to users over how to manage information they store on the cloud. Corporates decide what and how they upload data, all from a singular platform available across all devices. Microsoft is also increasingly investing in several of their security programs: Credential Guard, Device Guard Hello and Defender to name a few. In addition, a Digital Crime Unit is busy improving the security of the products and services while protecting elders from tech scams and children from digital sexual exploitation.

Yet high-profile security breaches in the past few years have both made us all think twice about uploading naked selfies and raised questions about whether the corporate guardians of our private data are doing enough to keep our secrets safe. Time will only tell, but it is clear that corporations can adapt to these challenges quicker and more effectively than government. When my website or email servers get hacked, the nearest police station in Jnah is the last place I’d think to go. And hearing these promises of data protection, I remained skeptical about the privacy and security of my data in general but certain that Microsoft – and all tech giants – is doing more to protect me in cyberspace than my government is doing on the ground in Beirut.

Alma Kharrat, senior program manager, and Elias Bachaalani, security software engineer, are two Lebanese who made Microsoft their home and are now fully integrated in Microsoft’s community, contributing to the company’s ambitions. During a meeting with Kharrat and Bachaalani organized by Microsoft in one of its many dining venues on the Redmond campus, both became sentimental when I spoke about life back in Lebanon, but they also expressed the disappointment they felt when visiting family from time to time. Lebanon has failed and betrayed them. Microsoft has not.

They reminded me of countless friends in cities like Dubai, where everyone belongs to a different multinational company. I see corporate identity replacing national identity, especially among people who opt out of their broken national social contracts and chose to seek a new life within a sheltered corporate environment. With an average of four connected devices per person today, people are less isolated and more liberated from geography, local governance and territory. With globalization making national borders increasingly meaningless, our states need to adapt or risk being made obsolete by the corporate kingdoms to come.