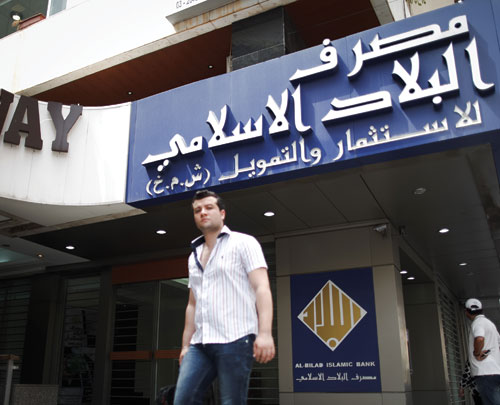 Lebanon’s propensity to host political, media and financial players from around the region and beyond is well know. Its weak government, strict banking secrecy laws, open media landscape and plethora of rival political movements provide a welcome embrace for all and sundry. Among those to have set up shop here recently is an Iraqi outfit with an intriguing network of connections trailing back into the quagmire of Iraq’s troubled contemporary history.

The operations in question are a nascent TV station, Asia TV, and Al Bilad Islamic Bank, which opened a branch in Hamra in recent years. The lynchpin that joins the two enterprises is one Mr. Aras Karim Habib who is the chairman of the TV station and sits on the board of the bank (and was responsible for the opening of its Beirut branch).

Habib was chief intelligence officer for the Iraqi National Congress (INC) — the umbrella organization of opposition groups set up with American assistance after the 1991 Gulf War — as is documented in investigative journalist Aram Roston’s book, “Ahmad Chalabi; The Man Who Pushed America to War.” Roston also outlines how Habib was one of three principals for Boxswood Inc, a company established in the US by Chalabi through which the INC received funding from the American Defense Intelligence Agency.

It didn’t take long for Chalabi and Habib to fall from grace among certain elements of the US establishment after the 2003 invasion of Iraq, with a US intelligence official accusing Habib of passing intelligence to Iran, as was reported by the British daily the Guardian. In 2004 an arrest warrant was issued for Habib relating to his intelligence activities with the INC. Habib was not available for comment despite numerous requests by Executive.

Habib is now living in Beirut, and his connection to the Chalabi family continues; Al Bilad Islamic Bank was incorporated in Iraq in 2006 with Chalabi’s nephew, Issam al-Uzri as chairman. Issam’s son, Hussein al-Uzri, was the former chairman of the government-owned Trade Bank of Iraq (TBI), which was accused of corruption by the Iraqi government in June 2011, leading to the former chairman to flee the country, while his father left his position as chairman of Al Bilad two years ago.

The link between the two banks came to the fore following the award for “deal of the year” given by a trade magazine to Al Bilad in 2008 for being allocated a $100 million letter of credit by TBI.
Habib set up the Beirut branch for Al Bilad, the bank’s 15th branch and the only one outside of Iraq, in Hamra in December 2010. “Habib was involved directly in establishing the bank in Lebanon and he is the coordinator between Iraq and Lebanon,” says Talal Kaissi, head of the Al Bilad’s Beirut branch.

The bank is set on expanding its operations in Lebanon, according to Kaissi, it has acquired a building in downtown Beirut facing Starco for $32.5 million. The building, which is still under construction, will be the new bank headquarters and the Hamra office will remain as a retail branch.

From banking to television

More recently Habib has ventured into Lebanon’s media mosaic with the establishment of Asia TV, which according to Kaissi “is a private business” of Habib’s (which Executive confirmed banks with Al Bilad). Entifadh Qanbar, Asia TV’s general manager, goes further saying Aras Karim Habib is the chairman of the station and explains, “I run the day to day operations and [Habib] sets the general direction.” Asia TV started broadcasting on March 5 and Qanbar says, “We are a pan-Arab TV station. We cover the Arab, Muslim world with an Iraqi taste. I want English, Persian, Turkish and perhaps Kurdish news broadcasts.”

The station is one of several new media enterprises in Lebanon that endeavour, in the words of Qanbar, “to counter the Gulf invasion in the region.” The coverage of the Arab uprisings, and in particular the Syrian crisis, has severely polarized the journalistic community in the region and the coverage from outlets that enjoy support from the seemingly bottomless pockets of the Gulf, such as Al Arabiya, Al Jazeera, Al Mustaqbal, Asharq Al Awsat, Al Hayat, An Nahar and many more has created a backlash.

Among those providing an alternative discourse are several new TV stations such as Al Etejah, Al Maseera, Al Mayadeen, Iran’s Press TV and Asia TV. However, with the schisms running throughout the Middle East increasingly characterized by the rivalry between the Sunni monarchies in the Gulf and the Shia theocracy in Iran, charges have been made that these new outlets are nothing more than an Iranian-backed push into the Lebanese media landscape, thus further exacerbating tensions.

The hand of Tehran?

Aletejah and Asia TV are members of the Tehran-based Islamic Radio and Television Union, Aletejah is connected to an Iraqi military outfit call the Hezbollah Brigades (not linked to the Lebanese militia-cum-political party), Almaseera is connected to the Shia Houthi rebels in Yemen and a recent report on France 24 created waves by bringing into question the independence of Al Mayadeen from the interests of the Iranian and the Syrian regimes. Asia TV’s Qanbar says that his station receives no support from Iran and asserts further, “We have never been told what to say on our station.”

The station’s output is guided by a particular Iraqi vision of the Middle East that is perhaps best encapsulated by one of their flagship shows, Qalb al Aalam, or Heart of the World. The program focuses on the historical, cultural, political and economic relationships between Turkey, Syria, Iraq and Iran. Qanbar expands on the relationship with Iran saying, “We are in the camp of the Iraqi’s. The Iraqi establishment, including Sunnis, Shias and Kurds, now all have good relations with Iran. What’s more, we have a strategic relationship with the United States. That is very disturbing to the countries of the Gulf.”


The ties that bind

The relationship between Habib and Qanbar is a long one and is entwined with their involvement with the INC and Ahmad Chalabi. Qanbar says that, “[Chalabi] is a good friend and I ask him for advice on some issues and he will give me very good advice that I will consider but I will not follow in the steps of Chalabi.” However, Qanbar has served as his long-term spokesman and his personal account on LinkedIn, the professional networking Internet site, lists his current status as “Advisor to Dr. Ahmad Chalabi.”

With the long-standing links between the three men it begs to be asked if Chalabi has any involvement in either the bank or the TV station. The Wall Street Journal recently quoted Chalabi as saying that he is considering joining the editorial board of Asia TV but Qanbar denies he has any role at the station, saying, “We get our funding from Iraq, from a group of businessmen and a group of individuals that want to counter the Gulf invasion of Iraq but Ahmad Chalabi is not one of them.” Furthermore Kaissi at Al Bilad also denies Ahmad Chalabi has any direct involvement in the bank’s affairs.

In any case as the media war in the region intensifies the Iraqi challenge to the “Gulf Invasion” has set up shop in Lebanon and looks set to stay.