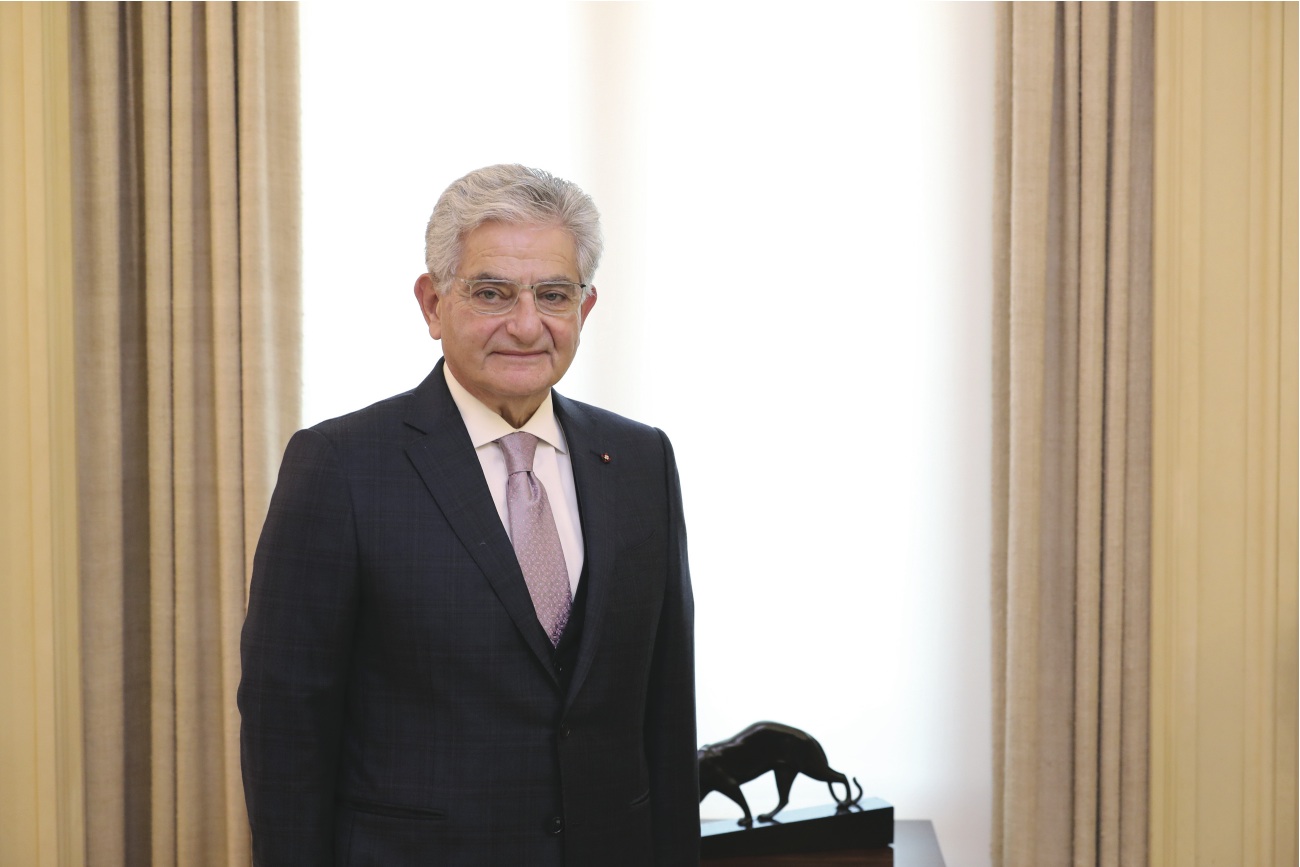 As the banking sector is, for the umpteenth time in the last quarter century, the litmus test for Lebanon’s economic survivability and hopes of prosperity, Executive sat down with Salim Sfeir, chairman and chief executive officer of Bank of Beirut and chairman of the Association of Banks in Lebanon (ABL).

E   At the time of Parliament’s vote on the budget in July, you spoke in an interview to Reuters of positive sentiments about the budget coming from the market. Some time has passed and the budget has been published in the Official Gazette. At this point, what is the position of ABL on the budget? What are your expectations?

Our expectations are positive. The process of this budget should lead to a much better budget for the year 2020 that offsets the weakness of the present budget. Although this budget is positive by decreasing the deficit from 11.5 to 7.5 [percent of GDP], it has a long way to go in order to be better accepted by the international [entities] interested in assessing the economic situation in Lebanon. However, decreasing the deficit from 11.5 to 7.5 is an achievement.

E   But isn’t this reduction a target figure? Wouldn’t you agree that the decrease is not yet guaranteed?

It is not guaranteed, but the vision, the outlook, the good will, and the aim to achieve [this deficit reduction target] are not only in the air, but [affirmed] in the program of those who are in command. Thus, we are now looking forward to see a much better budget in 2020, also substantially decreasing the deficit of the budget.

E   You mentioned that you see weaknesses in the present budget. Are there specific points that you want to see addressed and implemented in the 2020 budget?

The private sector is the engine of the economy, of welfare in the country, and the engine of employment in the country. We now have 40 percent unemployment among our youngsters. We [the banks] cannot serve the private sector to our full extent as 50 to 60 percent taxes on our income are being imposed on us. The politicians have a negative assessment [view] of how the profits of the banks are distributed. The profits of the banks are distributed to best serve the economy of this country. At the end of it, what goes into the pockets of our shareholders does not exceed 4 to 5 percent [of profits], and the rest is distributed over the economy and to what I would call the welfare of the economy.

E   So you are seeing a tradeoff between the bank’s mandate to serve the private economy and the government obliging the banks to contribute more in service to the fiscal balance and public finance?

E   From your perspective, is it then correct to say that the banking sector is more than any other sector in the economy taking the brunt of the burden linked to the new budget, which seems to me to have been designed as very basic exercise in scarcity management?

This [observation] is right in terms of numbers, in terms of outlook, and in terms of easiness. Despite all the economic, security, and political challenges, my wish is to see the government prioritize the economy. For the past 25 years, we have been serving the country. We are here to reinforce and strengthen our private sector that is behind the economic vitality of the country.

My personal wish for the 2020 budget is to see our decision-makers taking the international recommendations into consideration, [implementing them] if not from day one then at least over a period of two to three years.

E   How about expectations of the Lebanese people? The sentiment on the street on the 2019 budget seems indifferent or mostly negative. One rarely hears positive comments, whether about the budget or about the banking sector and the profits of banks. Should there be efforts to change this perception, and is this sentiment a problem?

With due respect to our customers, who are our friends, our family, and our supporters, the reality of our sector is that almost 70 percent of our profits are distributed to our customers, according to the percentage to which they participate in the activity of the bank. So we have to be clear on this and perhaps now clarify the picture that we are a service industry working to the best benefit of the people of Lebanon.

E   Cost of capital has been a concern of bankers in the past. What is the outlook for cost of capital and profitability distribution to shareholders in the current environment?

If you compare Lebanese banks with the banks in the region, and even to the international banks, and then decide in which bank you should invest, our ratios, our liquidity, our [ratio of] deposits versus our loans, our Cook ratios (a solvency ratio dating from Basel I and defined as capital to risk-weighted on-balance sheet assets plus off-balance sheet exposures) are the best. We are the only liquid banking industry in the region.

E   Are you worried that the profitability of Lebanese banks will stay the way it is?

We are worried about the way in which [the government] are dealing with our profitability without our [consent] because they have implemented triple taxation. This is hurting the future investments of the banks very badly. We are hoping that in the 2020 budget, the government will take into consideration the double taxation.

E   One aspect of the last few months seemed to be that the government reduced payments or deferred payments to contractors, service providers, and suppliers. Is this creating stress for banks because the government is changing their payment morale?

If we want to be fair, we should compare the behavior of our Ministry of Finance (MoF) in Lebanon in terms of payment with [that of] each ministry of finance in the region. The situation [of deferred settlements by governments] is a common practice. There is always a delay for several months, and in other countries [of the region] even a couple of years. However, our Lebanese government and MoF have failed at no time to pay their dues. It is not the time to criticize it now. It now is time to strengthen what is strong in the economy.

E   When one looks beyond Lebanon, stories from global markets testify to many challenges for banking. Just in some of the latest unsettling developments, interest rate decisions in the US saw Wall Street disappointed with the Fed’s cut as limited to 25 basis points, and then there were the trade tensions between the US and China that have this summer germinated into talk of currency wars. From Brexit to global scenarios, it seems that the world is not a supremely secure place right now for investment decisions. What does this mean for Lebanese banks?

Allow me to correct the last part of your statement. The world remains a secure place for investment. However, there is a change in the economic structure of the world. The world is getting more competitive for the first time in our contemporary history. Nations are challenging each other for their rate of growth and the impact of their growth rate on their own economy versus competitors who were their friends in the past. This is positive, not negative. My personal wish is to ask our politicians to acquire the feeling [of competitive vigor] that other heads of state have for their economy versus other economies. People in charge of the economies of each and every country are in competition with each other. Thus, their first challenge within their nations is to reinforce their economy and their private sector, which is not the fact in Lebanon.

E   In going back to the discussion on the Lebanese specificities, there have in recent months, and even years, been rumors about the currency, rumors targeting the sustainability of the Lebanese lira and the dollar peg, along with rumors about politics. Is the investor community of Lebanon as unfazed by those rumors as it sometimes appears when one looks at the size of monetary flows, or are people very nervous and call you in the middle of the night because they are worried about their wealth and money?

The rumors are the viruses of the economy and each body is affected by virus [attacks]. The effect of the virus is the heavier, the stronger this virus is, and nobody is immunized.

E   So there is an effect on the investors and their confidence?

There is a negative effect on everybody, and I would only hope that the people of Lebanon would focus on their own personal and individual productivity more than dwelling on their nation’s productivity.

E   Do you have a recommendation to what course and method the government and MoF should pursue when it comes to issuance of debt instruments? Discussions about zero-interest bonds or one-percent bonds and similar shenanigans seem to have been going in circles and are not constructive. What is the best way for Lebanon to handle their need for issuance of debt?

My wish is to see our politicians in charge of finance and the economy of this country to be more focused on the values of the international community when it comes to economics and finance, rather than focus on what the people would think. Managing the financial sectors of the economy, managing of the economic indicators of a country, should be independent from public opinion. It should belong to an international value system, because we are part of an international world, especially financially, especially banking-wise, credibility-wise, and compliance-wise. All those matters should be considered [with regard to] international values.

E   You had told me in an interview a few years ago that you are not interested in politics and said the best thing people could do was pray for our politics. Do you have any advice about politics?

The best advice I can give on politics is that the people managing the finance and the economy should be independent and technocrats.

E   Today, many models for organization of a society are being put on the table again for discussion globally, from liberal democracy à la Americaine to nationally focused ones. Is there an economic and political economy model that, in your view, Lebanon should orient itself on to go through the coming years of austerity and change?

Lebanon is Lebanon. We are independent and liberal by nature. However, I think Lebanon is thirsty for peace and thirsty for opening its atmosphere to our real wealth. Our real wealth: that is our intellect, our innovation, our creativity, our ambition, our resilience.

We are tired of defending our values. We want our values to be implemented. For that purpose, we need to give to Lebanon an economic stability and an economic strength that would guarantee the economic welfare of our citizens. In order to reach this we need to focus more and strengthen our economic indicators. Whatever system you will apply, if it respects those values, it will be the right system for Lebanon.