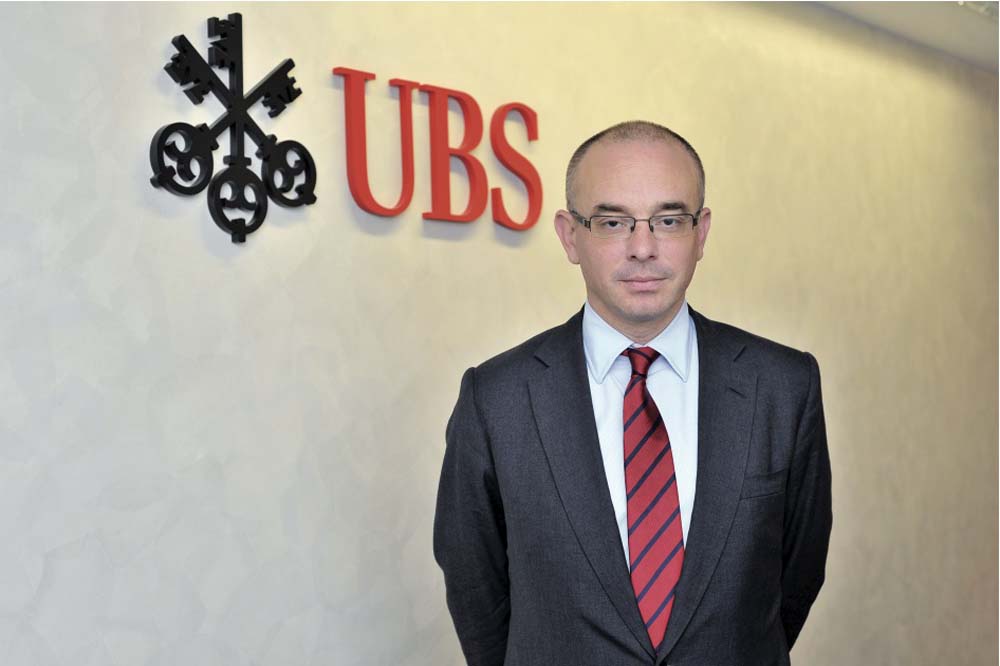 In good times and in bad ones, leading wealth management institutions and Lebanese families and individuals are connected via a bond of mutual interests in profits and wealth preservation. Among the torchbearers of this bond are the top-rated economists of Swiss banks who come to visit Lebanon with clockwork regularity. Usually, they bear at least some glad tidings. But instead of incense and myrrh, they carry presents of economic insight and advice. So it was also this year.

Executive shared the benefit of enjoying, from three floors above a Downtown street still strewn with debris from the previous night’s protest, elaborations on the state of the global economy by Paul Donovan, UBS’s Managing Director, Global Economics.

Among the topics he discusses is China, which Donovan sees as still a good distance away from being integrated into the East Asian economy and whose slowing performance he believes is less of a factor than it would be in circumstances of greater integration. He also talks about the Federal Reserve, whose indecisions since the summer have been providing endless fodder for debate among analysts and investors. While his big-picture view of the global economy is that “it is not doing too badly,” with the eurozone improving after two terrible years and the United States continuing to be alright, Donovan concedes that there are enough potentials for trouble, including Brazil and Turkey, where he sees “significantly increased risks” not only because of the political situation but also with regards to the economy. “The central bank has run a complicated policy and Turkey remains relatively dependent on international capital flows to support its economy. That is not an ideal combination,” the UBS economist says.

But as the conversation progresses, more complex issues are being discussed and the real answers to today’s economic challenges seem to grow more elusive. These include questions such as whether it is possible to reach a needed, broad democratization of the Chinese economy by achieving gains in the standards of living that exceed the overall growth rate of the economy; or the question of how to stem an increase in counterproductive, prejudice-driven discrimination against refugees and migrants who have been arriving to Western Europe and are needed to vitalize the continent’s aging countries. While such migration should be positive from an economic perspective, Donovan confesses his skepticism that defeating the growing scapegoat economics and irrational prejudices is possible. This is all the more unfortunate because irrational discrimination is indeed a detriment to economic performance, he says. “In my view, and this should probably be the next book that I should be writing, one of the biggest threats to an economy today is prejudice in the treatment of people and the treatment of a labor force, because we are in an environment where what economists call human capital is the greatest asset that a country has.”

In conversation with Paul Donovan

For the bank economist it would be that the Fed is not behaving itself, in two ways. One, by delaying rate hikes which is troubling but not serious. Two, by signaling that markets had impacts on rates. I don’t think that this is actually true but the impression is damaging, because the last thing we want is markets dictating things to economists.

I think the biggest problem for the central bank [economist] is the unreliability of economic data. The data is to be revised and there is so much structural change that the data is very limited in telling us what is actually happening. That creates a situation where one can take a positive or a negative view on one and the same number, depending on your mood.

If the manufacturer is an exporter, I would say the [third economist’s] biggest headache is currency volatility. Currencies have been relatively volatile, in a relatively unpredictable manner. This obviously creates unpredictability around profit margins and around resource allocation.

I think there is a related theme, which is that volatile data lead to volatile markets and volatile policy. We have uncertainty about how genuine the data is and how things are performing in real time. For the policy maker, this creates the risk of policy error, for the company the risk of a volatile operating environment and for the investment bank uncertainty in the sense of Keynes’ famous saying, ‘the market can [remain irrational] for longer than you can remain solvent.’

E   Do you have a specific message that you bring on your visit this time, not necessarily just to investment clients of UBS but to the market here in Lebanon?

My role is of course to try and explain where we think the world economy is going. Broadly speaking, I think the world economy is not doing too badly; growth in the United States and Europe will in my opinion continue to perform relatively well. The Chinese economy has slowed a little but China doesn’t matter as much as China thinks it does. I think we are in an environment of moderate economic activity. I hope that this is going to lead to a period of stability in issues like commodity prices, and when we look at the Gulf region that is very important. This will also be important for Lebanon via remittances from workers in the Gulf.

[pullquote]“If there is a very simple message to communicate it is that the world is changing – challenge everything you think you know.”[/pullquote]

I think the main story that is worth reminding clients and others of is that the global economy has undergone a great deal of change in the last 15 years, and this is not just since the crisis. Before the crisis, significant change had taken place and this makes understanding economic relationships more difficult. The challenges of understanding the economy and the challenges of investing in the economy have increased because of the structural changes. In particular, trade is today very different to what it was 20 years ago. We have difference in labor markets, people work for longer, female participation rates have risen, labor markets are not the labor markets of 20 years ago. If there is a very simple message to communicate it is that the world is changing – challenge everything you think you know.

E   What is your view on the Middle East economy – is it the most volatile of them all?

It is perhaps the most focused of them all. It comes down to oil in the GCC and if you don’t have oil, it still comes down to oil. Dubai depends in large part on oil revenues flowing through its financial center or on tourism revenue from regional visitors who have oil-related incomes. Lebanon is perhaps a little different but the remittances from oil revenues to Lebanon are very important. This is a tricky situation where you have to focus on a single commodity whose price is as volatile as the price of oil is. Economic diversification of the region has still remained limited. Dubai is the exception but even the domestic industry of Dubai is still very dependent on oil money flowing through.

E   Do you have an outlook for the Lebanese economy in 2016?

We don’t have a formal forecast for Lebanon but it is clear that the challenges in the region are fairly significant. The influx of refugees, the weaker tourism numbers – the lower oil price is a help but the lower remittances to Lebanon effectively cancel that out.

E   If we talk about capital flows, is quality or quantity more important?

Quality or quantity is more important, depending on the circumstances. We have a general problem: global capital flow has shrunk and now is roughly a third of what it was at its peak in relation to GDP. Depending on how you measure it, global capital flow in 2007 was between 15 and 20 percent of GDP; today it is about six percent of global GDP. For a country like Lebanon, [inflows of] capital for infrastructure development and regeneration are very important. Today everybody — in emerging markets and in developed economies — wants to [see investments into] infrastructure and regeneration, but there is now less capital, so we have suggested that we are witnessing the start of a war for capital.

E   Is there anything from your vantage point that Lebanon could do to increase the efficacy of capital flow and also be more attractive to foreign capital?

Again, Lebanon has a problem of circumstances. The situation in Syria is always going to present a challenge and I am not for a moment suggesting that Lebanon is in a position to do anything about this. I think that investors tend to appreciate relatively stable political environments – political stability gives them confidence if they invest something with a 20-year view and continuity of law is helpful. The current discussions over the political structures here are perhaps a challenge to attracting capital.

Perhaps. Ideally of course, governments do not just exist to attract foreign capital but for many reasons. This is a hurdle to overcome. Clearly this is not stopping capital from coming in, not stopping regeneration here in Beirut. The question is if it could do better and I think at the moment the answer is, yes, it could do better.

E   How about our imperfect Lebanese capital markets structure? A detriment from your perspective?

To the long term, yes, I think there are issues. In the near term where we are talking about attracting [Foreign Direct Investment], you look for an investor who wants to come in and commit to Lebanon for a 15 or 20 year program. The capital market in Lebanon is not necessarily important if they are investors from the GCC or Europe; they have their own sources of capital. In the longer term, if Lebanon is seeking more indigenous or domestic capital and seeking to smoothen the way of taking domestic savings and investing them in an efficient way, capital markets are better than most of the alternatives. An efficient domestic capital markets structure is constructive and a positive development – it is not perhaps an urgent requirement. In the near term, I think Lebanon could improve its economic output without a highly efficient capital market structures. However, I am a free market economist working for a bank, so over time I am of course going to favor capital market structures.

E   If we were drawn into a war over capital, would UBS be inclined to come to the aid of Lebanon?

UBS is of course very committed to Lebanon. We have an office here and I am here twice a year. It is an economy we work with very closely. It is a situation where certainly a bank like UBS is very happy to offer the advice and expertise that they can to Lebanon as a country and I think that is something that Switzerland in general is very happy to try and do. That advice and expertise will hopefully help Lebanon find a path in a more difficult global environment.