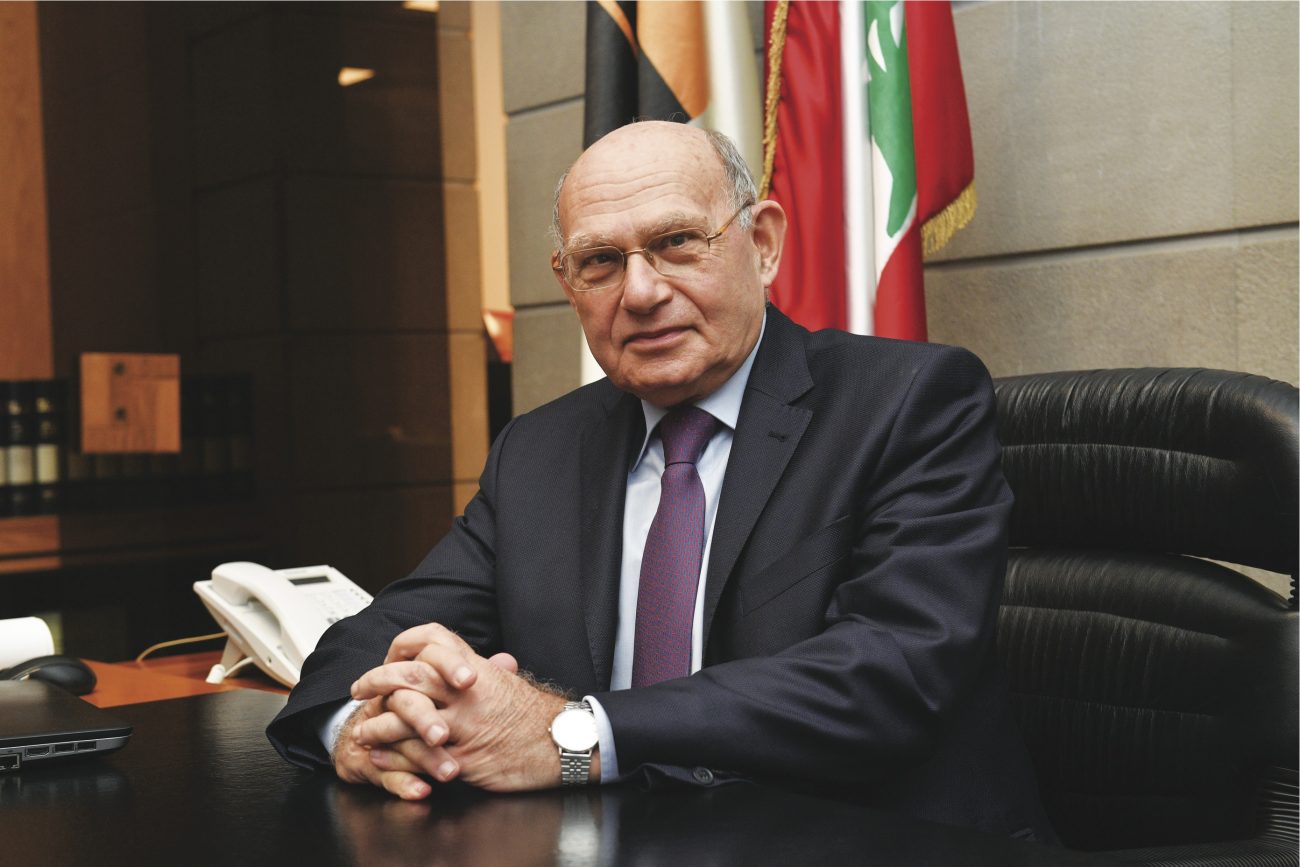 After living in France for 30 years, Jad Tabet, an architect and urban planner, returned to Lebanon early last year to run for the presidency of the Order of Engineers and Architects of Beirut (OEA), an independent trade syndicate covering all Lebanese regions bar the North. Tabet campaigned as an independent against Paul Najem, a Free Patriotic Movement candidate that was backed by several of Lebanon’s most powerful political groups. Having secured an unlikely victory in May, he is turning his attention to several ambitious goals for his three-year term, including reforming the organization and increasing employment for members in new sectors. Executive sat down with the new president in January to discuss his plans for the OEA.

E   Tell me about your platform, and why you think you were able to come out on top.

In the last few years, there has been a large civic movement, with people raising different issues related to the question of garbage, electricity, water, pollution, etc. My platform was based on several things. The first thing was the participation of engineers in the large issues that concern the public. We think that all these issues are related, from electricity to transportation to pollution to the preservation of heritage, forests, natural heritage, etc. All of these issues [fall under the purview] of engineers and architects. We have technical solutions for these things. So one of the first points on my platform was that the order should play a role in these issues. This was not the case before, so since September, we have launched a series of conferences during which all these issues were debated, and we invited people from the government, from different administrations, to come and discuss these issues with us.

We are raising two issues. The first one should be a real transformation in the practice of engineering and architecture in this country. I deeply believe that there is general trend everywhere in the world toward what I call the environmental revolution—I think we’re entering  a new phase of  human history, protecting the environment is becoming a major issue, and our engineers and architects in Lebanon should be trained for this.

I think this will open new initiatives and new work possibilities for them everywhere in the world, if we train our engineers and architects [in environmental protection] and green buildings…this will open new [opportunities] for them. I deeply feel that [in] the next 10 or 20 years, the issue of the environment will be [commonplace]. Everywhere in the world today, environmental protection [is] becoming [a] major issue, and [at the moment] we in Lebanon [have not yet caught up]. We should give much more importance to this and we should train our engineers and architects for it.

The other issue is [the] internal organization of the order. The order now has [just over] 50,000 members, but it is still working  as a small club. So one of the main issues I’m [pursuing] is transforming the order into a modern institution, and to have it [rated by the International Organization for Standardization, or ISO]. With 52,000 engineers, we should become a real modern institution with very clear rules of governance. This is not the case today.

We should have a real structure that functions well: How do you [expect] the order to really serve the engineers if the structure does not function well? The other thing that I really want is to have very strict rules of governance with no conflict of interest possible. This is very important to me.

When I was elected, I did two things immediately. First of all, I [issued] a declaration of what money I owned in accounts in the banks, as houses [in] real estate, etc. [I] put in a sealed envelope [the information about] all I owned. This envelope is sealed, and it can be opened at any time in order to have  real transparency.

The other thing I [issued was] an official conflict of interest declaration. I [used the] example of what is done [by] international organizations. You know when you have UNESCO, [the] United Nations, [its necessary for] key staff to [release a statement] on conflict-of-interest. I did it, and I want to generalize it for all the elected people in the order. I think this is very important. Having a very clear rule of transparency is something that, in a country like Lebanon, is very important.

E   What are some specific examples of the structural shortcomings you’ve alluded to?

For the time being we don’t have an HR department—we have 140 employees, but we don’t have an HR department. [At the moment], it’s the director of the order and the president who are acting as HR managers, which is not [acceptable]. This is one example. We have really to [create] a real structure. We have, for example, a very light and poor communications department, which is not acceptable. We have to [improve the] communications department with new technologies, etc. The website of the order is very bad. So all these things should be transformed and changed, and for this reason we should probably hire new people—but I don’t want to hire people before the whole evaluation and the whole new structure is done.

E   What are your next steps in achieving this ISO certification?

We are now launching a tender among international companies to help us establish a new [internal] organization, to first of all do an evaluation of the situation of the administration in the order today, then propose a new organizational chart that will allow us to have an order that is organized based on international standards, so that we can apply to have the ISO certification. We’re launching it in the following months.

E   What is your expected time frame?

E   You’ve spoken about environmental training programs to help Lebanese gain employment abroad, but what can be done for those engineers and architects that hope to make a living while remaining in Lebanon?

We have started [a] training center in the order. We have started to do training sessions on environmental issues. We’re preparing the engineers, for example, to become LEED [Leadership in Energy and Environmental Design] registered engineers. You register in the order [for] the program of training and then once you [finish] with the program you can go to the LEED and present your [qualifications] to become LEED certified.

E   Architects and engineers frequently report that they are underpaid in relation to the fees recommended by the OEA. What can be done to improve their wages?

This is true. Look, I will tell you something. We’re in a free market. Lebanon is a free market, and you can’t intervene. The percentage put in the order is a sort of incentive, it’s a direction that is given, but you cannot force [it]. You can’t force the owners, the developers, to apply these things. [For example, the Tripoli OAE said fees paid to members should be paid at the order at fixed rates. But members started to reimburse part of their salary to developers to remain competative.]

E   Architects and engineers also report issues of overregulation associated with technical control offices that were established a few years ago.

It’s not the order that installed this; [it was] the government. It’s a governmental decree imposing this issue of technical control, which is something that came from France. It’s a copy of what happens in France. I think the decree has a lot of things that do not work. It’s not well applied in Lebanon; it’s not adapted to the Lebanese case. We are now discussing [it] with these [offices]. [Currently] you have seven bureaus of control, technical offices. We’re talking with them to try to set up some rules for their work.

We want to organize these technical control offices, because we’re getting a lot of complaints from engineers that they take money, [but] they don’t do what is really important, and what is their real function. They don’t go to the site, etc. So we want to [impose some] sort of control on them. We hope that the decree will be changed. We’re trying to work on a committee that would propose amendments to the decree to the government and to the minister of public works.

E   When you ran for the presidency of the OEA, a few parties said they backed you, including Beirut Madinati, Kataeb, and the Progressive Socialist Party. Do you identify with any of these parties?

No. In fact, I will tell you exactly what happened. I had been living in France for 30 years, and in December 2016, I got a phone call from a former student of mine [who] told me, “We want to have somebody that runs for the presidency of the order, that could be backed by the civil society, who would not be affiliated to any political party … You are a figure, a professional figure. We want you to run for this post.” I told them, “Look, I don’t think we have [a good chance of winning], but, if you want, I will do it just to do campaign that raises major issues.” We did the campaign, I was backed by several [groups]: Beirut Madinati, but not only [them], by other civil-society groups [as well]. The backing by Kataeb and [the] Progressive Socialist Party only came [in] the last week. I will be very frank with you. The whole campaign was done with the civil society, not only Beirut Madinati.

E   So you were not, and are not, a member of Beirut Madinati?

E   When you were elected, you won by a narrow margin of only 21 votes. How would you describe your relationship with the OAE council and other members now that you’re the president?

(This interview has been edited for length and clarity.)