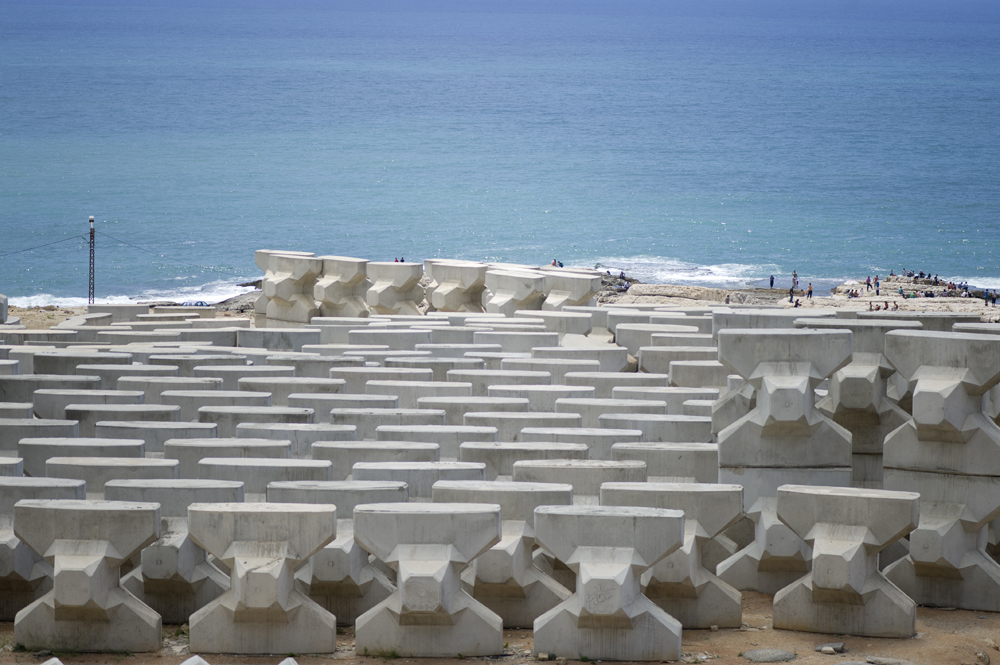 This article is part of a continuing Executive investigation into public and private lands along Beirut’s western coast. For more stories in this series, click here.

No one knows what — if anything — is coming.

Rumors about the fate of a peninsula next to Beirut’s iconic Pigeon Rocks abound, but little is known for sure.

“Three companies are going to build a beach resort in 2016,” a municipal police officer now standing guard next to the parcel of land tells Executive. Like so many others who claim to know what will become of the land, he offers no source for his information.

Raja Noujaim, an activist with the Association for the Protection of the Lebanese Heritage (APLH), claims no special knowledge about future development plans. He has, however, dug into the past and checked public records for ownership of the land.

Showing Executive a cadastral map of the peninsula marked with red ink, he explains that three companies currently own the 14 plots of land which were purchased by former Prime Minister Rafik Hariri in the 1990s. Noujaim is investigating ownership of the companies but did not have complete data as Executive went to press.

Lawyer Ali Khalil, who represented fishermen the companies were suing for having allegedly built sheds on the land, says the companies are Sakhrat al Bahr, al Bahr and Sakharat al Yamama. (Khalil also represents NewsMedia, Executive’s publisher, in unrelated matters.) The companies’ lawyer, Othman Arakji, did not reply to interview requests. Khalil, Noujaim and a source familiar with the issue who requested anonymity all confirmed that Rafik’s son, Fahd Hariri, along with his sister Hind, is today the one making decisions about the land’s future.

Both Noujaim and the anonymous source say that the Hariris — whom Executive was unable to contact — is not yet sure what to do with the land.

As of late, Hariri decided to clean up the land, hence the problem with the fishermen. Khalil says a total of 10 fishermen had built houses near the land. Most built structures that allegedly crossed onto Hariris’ land, hence the lawsuit.

Nine of the fishermen settled outside of court, but one is continuing to defend himself. His argument, Khalil says, is that his house is strictly on the rocky coast, not the Hariris’ land.

A 1925 law defines as public coastal land that “consists of seashore till the farthest distance that the wave could reach in winter and sand shores and pebbles,” according to a presentation prepared by the Ministry of Public Works and Transport (MoPWT) in 2006 and available online.

The fisherman apparently does not dispute that his house was erected without any permit but is now attempting to prove via the MoPWT that he built on state land, not the Hariris’ land, Khalil says.

Exploitation of coastal lands for private use has been a contentious topic for many years. Disputes have simmered without resolution on questions of citizens’ rights to unimpeded access to the public coast. Other disputes relate to environmental issues, and to the fact that numerous commercial operators, and even politically connected private households have incurred gains from exclusive usage of beaches without paying any fees to compensate the public.

The Raouche area, where a rocky seaside promontory sits next to an undeveloped sloping territory, is traditionally used as a base for fishing, but also attracts large numbers of people who picnic or play sports on its sandy parts. For many years, however, the entire area between the Corniche and the Mediterranean has not been visibly managed by any authority or company, apart from installations of most basic access controls via a low metal railing along the pedestrian sidewalk.

In May, workers began replacing the railing with a much higher fence, sealing the property off against unrestricted access. Shortly thereafter, concertino wire was brought in and the municipality of Beirut installed a semi-permanent structure to house municipal police officers.

Activists later broke through the barriers and in June the land was again open for public use. The arguments for maintaining the status quo of free public access are based on historical rights. APLH’s Noujaim has been a leader in efforts to avert any construction on the land, arguing that — although Beiruti families have owned it since Ottoman times — the space has been used unimpeded by the public for generations.

Noujaim and others have sent letters to various ministries and circulated petitions with little to show for their efforts.

A friend of the Hariri family, Noujaim tells Executive as he passes off research and documentation, “I’m going to Fahd.”