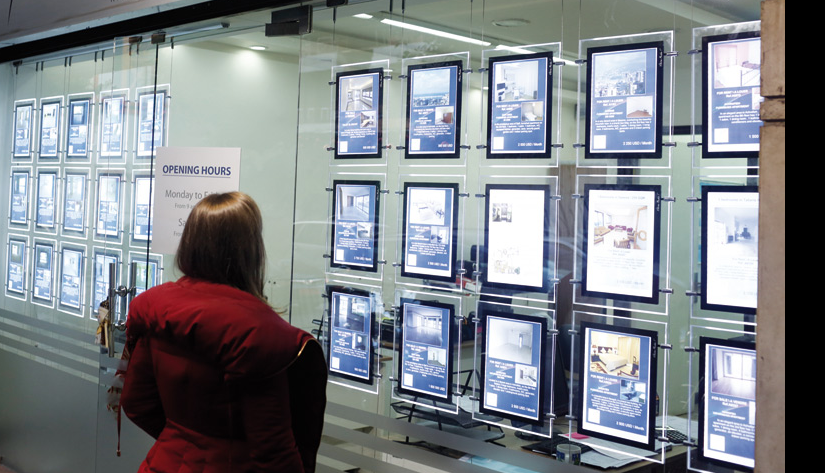 The stagnation that characterized the real estate market during 2012 continued throughout 2013. Bad? Perhaps.

Stagnation, however, is not regression, and that’s definitely a positive sign. While the market was indeed sluggish this past year, it has managed to remain relatively stable despite nearly a year without a government, a shrinking economy, growing security tensions across the country and a flood of over 930,000 Syrian refugees.

All in all, the slight reduction in real estate prices that took place in 2013 is a normal market reaction to a very opaque, unpredictable economic, political, and security situation.

The main real estate indicators continued to drop in 2013. There were 25 percent fewer construction permits in 2013 than in 2012 and the value of transactions dropped by 5 percent in the same period.

Strained market conditions, however, have an obvious negative impact on demand. Investors, who up until now had remained optimistic, find their outlook shaken by the prolonged economic stagnation. They are also taken aback by the prices that developers and property owners, seemingly oblivious to the changes in the market conditions, still post for their products.

This discrepancy between demand on the one hand and supply on the other is the real reason for market stagnation and the resulting drop in prices. Demand, in other words the people buying and renting apartments, offices, and retail units, is a reflection of economic realities.

Supply, represented by land owners and property developers, is usually more distanced from economic realities and therefore sellers tend to over-value their properties.

Prices are dictated by demand, however, which has been putting a downward pressure on prices.

Buyers and tenants indeed refuse to pay one penny above market value, aware that there is ample supply on the market and that they can shop around at their leisure.

This new dictate was first reflected in the drop in effective selling prices of new apartments.

Developers are much more flexible with their pricing than they were a few years ago, easily offering a discount of 5-10 percent. A serious buyer can even negotiate a discount of 15 percent, which was unheard of in 2011 or early 2012. The year 2013 was thus an ideal buyer’s market. Prospecting homeowners could take their time to look, compare, negotiate, and find the right product at its fair market value.

Demand from Lebanese expatriates, foreign nationals, and well-to-do Syrian refugees is limited and insufficient to absorb all the stock available on the market.

The same is true for retail rentals. As many shop owners were driven out of business during the past several months, the number of vacant stores has continued to grow. Overall, retailers’ revenues dropped by 20-30 percent, and logic dictates that rental rates should follow suit.

Property owners were slow in adapting their prices to market realities, however, and it is only in the last few months that their asking prices have started to be more compatible with the financial potentials of their property.

Two real estate markets weathered the storm better than the above market segments: offices and land. The office market (both sale and rental) remains stable, despite the worsening economic situation, probably due to the very limited supply of good quality offices on the market.

Another stable market is that of raw land in the capital. Prices of land have remained on a slight upward curve during the early months of 2013 and have stabilized in more recent months. They do not show any signs of dropping in the near future. This is due mainly to the scarcity of land, especially prime land, in municipal Beirut and its immediate surroundings.

The price of land outside Beirut has dropped slightly, mainly because prices had increased too sharply in earlier years. They had followed in the wake of the price hikes in Beirut but were unjustifiable and unsustainable within their regional context.

Although 2013 was a rather poor performer, it resisted the many disruptive and in some instances destructive events rather well. The performance of the real estate market in 2014 depends entirely on the political outlook this year will bring, which will translate either positively or negatively on the security and economic fronts. The creation of a new government bodes well, but the series of car bombings is likely to have a negative effect.