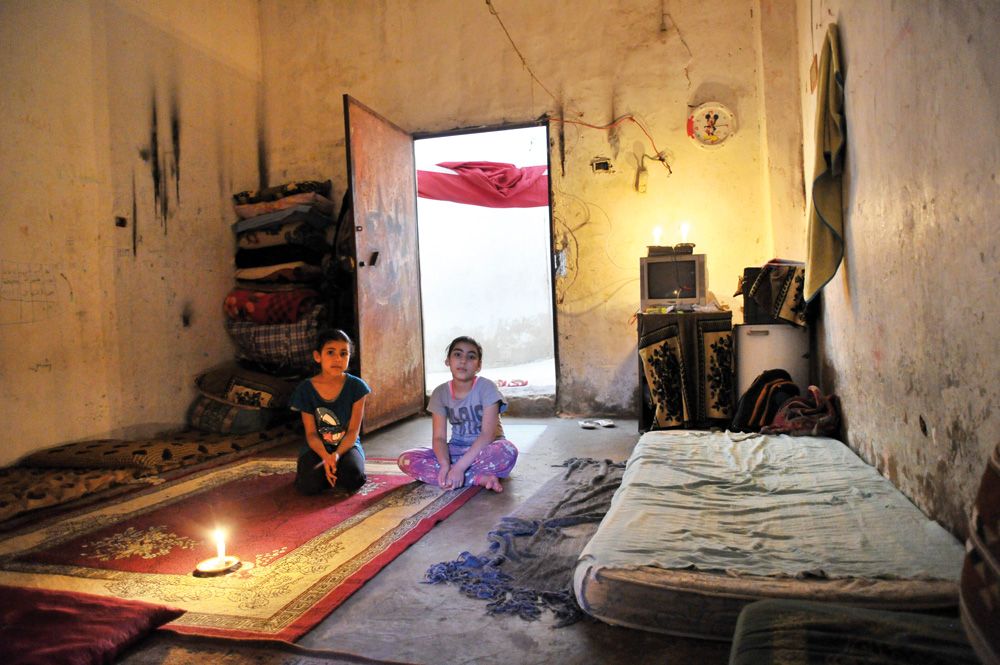 If not for the UNHCR, Asmar and her two young daughters would be alone on Beirut’s streets (Greg Demarque | Executive)

Sitting in the gloom of the single room that is now her family’s home, shadows from the small candle placed between us — the room’s only light — played against the wall as Asmar spoke of her flight from Syria.

Asmar, who preferred not to give her surname, is just one of the estimated one million Syrian refugees now renting accommodation in Lebanon. Two years since she arrived in Beirut’s Shatila Palestinian refugee camp, a small bundle of clothes all that she brought from the rubble of her home, Asmar still lives in the room she first rented. With a lack of affordable rental properties, rental prices and eviction rates have soared, while unregistered tenancies, deliberately left without formal contracts to avoid taxation and legal regulation, appear to be the new norm. Since 2011, the influx of Syrians has brought new challenges to Lebanon’s rental market.

In an unlit, unheated room, sharing a bathroom and a rubbish strewn courtyard with four other families, for Asmar, the difficulties of this new market are all too clear. Her husband has been missing in Syria for over a year after returning for his father’s funeral. Without his $300 income to pay the $250 rent, were it not for the United Nations High Commissioner for Refugees (UNHCR) considering her a vulnerable case, she and her two young daughters would be alone on the streets of Beirut: a victim of forced eviction.

It is the tragedy of her situation, rather than the abuse of a landlord, that threatened to force Asmar from her home. However, as a tenant in Lebanon’s rental black market, she is trapped in a regulatory vacuum that poses worrying consequences not just for Syria’s vulnerable citizens but also for Lebanon.

Out on the street

When Asmar first arrived in Shatila, her husband never thought to ask for a written lease agreement. With no papers and no proof of her right to live there, when her landlord threatened to force her onto the street, there was little she could do. It is a situation worryingly common among Syrians in Lebanon. A December 2014 report on evictions by the Norwegian Refugee Council (NRC) and Save the Children found that in three of the four areas assessed in Beirut and Mount Lebanon, less than 10 percent of households possessed a written lease. Where families had been evicted — and 6.6 percent have been since arriving in Lebanon — 98 percent did not have a formal rental agreement.

Without any formal legal agreement, refugees are easy victims of abuse. “Syrians feel vulnerable enough to accept these [informal agreements] or they feel that they don’t know how they’re going to stay so they take on these [leases],” said Nadim Houry, regional director of Human Rights Watch (HRW). “For them, there’s almost no tenancy security.”

But provision of rights is by no means guaranteed through written contracts. A 2014 UNHCR study found that most evictions of Syrian refugees are due to the inability of the tenant to pay the agreed rent. While a legitimate justification for action against the tenant, evictions frequently occur outside legal frameworks and in violation of Lebanese law, which requires a court order for forced expulsions.

When Asmar’s landlord started threatening to force her and her daughters out onto the street, she didn’t know what to do. Without her husband, who had registered them as refugees and received the standard UNHCR information about their legal rights, she was helpless, with no idea she was even entitled to any rights.

While going to court may not bolster Syrian tenants’ legal standing, such procedures could provide an opportunity for government intervention. Conceding that “the government has no intention to negotiate in the rental process,” Ahmad Kassem, senior shelter expert at the Ministry of Social Affairs (MoSA), admits that interventions can take place. “When it comes to evictions over rent non payment, aside from NGO advocacy, we are able to lobby the Ministry of Interior, not to pressure, but to encourage municipalities to disregard evictions.”

But even such actions depend totally on there being formal recognition of rental agreements. The positive result is negligible. “The state is just absent from the [housing] sphere completely,” said HRW’s Houry, “it’s leaving it to market forces and not just even that, but power relations. And in such power relations, Syrians are often the weakest.”

Vulnerable as they are, Syrians are rarely seen as blameless parties in cases of rent abuse. Talking exclusively to Executive, Nabil de Freige, minister for administrative reform, condemned renters who avoided registration. “For Syrians renting, it’s [to] their advantage to pay everything and to register the contract,” he said. “If no taxes are paid [on the income the landlord receives as rent], [the tenants] don’t have any rights. They can go to prison.”

However, de Freige made it clear that all fault cannot be placed on the tenant. “How can I expect to rent you my apartment without a contract? It’s against the law and against my interests.”

“If the tenant has any small problem with the landlord and they go to the authorities, if the contract is not signed or legalized, they will not pay attention to him,” he added. “It’s the fault of both but it’s much more the fault of the property owner.”

For Houry, the reason behind unregistered, contractless renting is simple: “Landlords don’t want to pay taxes.” Renting to desperate Syrians may be a lucrative business, but it is also one that enjoys unparalleled privacy from the prying eyes of the state’s taxman.

Lebanese law stipulates that all tenancy agreements must be registered with the local municipality, thereby rendering the income taxable. In practice, however, according to Adib Tohme, professor of Law at Sagesse University, unregistered tenants are “invisible” to the authorities. While written agreements can be used as proof of occupancy, oral lease contracts are not unenforceable. “It is within the discretion of the court to decide whether there is a contract or not,” Tohme said, “Oral contracts can be proved by all means of proof — the proof rests on the claimant.”

Exact calculations of tax loss are almost impossible to find in a market in the regulatory shadows, however in the house Asmar occupies, eight other Syrian families pay $250 rent per month, with additional charges for electricity. Registering a tenant requires a written lease, something that Asmar’s husband was never offered, so her Lebanese landlord enjoys a monthly income of over $2,000, tax free — just from one property in a Beirut slum. In the two years she has lived there, Asmar hasn’t seen one government official inquire about who is living there; ‘don’t ask, don’t tell’ seems to suit the taxman just fine.

The question of whether unregistered tenancies are policed is “one to be asked to the municipalities,” said MoSA’s Kassem. “Some do, some don’t. There is an interest to get the tax benefit from any lease agreement, but it totally depends on the willingness of the municipality to go through the process [of policing] — on the national level there’s no work on this.”

This rental black market has not gone unnoticed and efforts are underway to bring greater security to Syrian renters in Lebanon. An interagency scheme led by UNHCR to encourage formal rental agreements has assisted around 15,000 displaced Syrian families through house rehabilitation since 2012. The project involves offering non structural home improvements to Lebanese landlords in exchange for 12 months occupancy free of charge or rent reduction. A formal rental agreement is a prerequisite condition for landlords to be able to access the improvements, even if it doesn’t force landlords to register tenants.

“Due to the limited availability of housing that most Syrians can afford, most refugees live in sub-standard accommodation,” Kassem said. “While providing obvious benefits to refugee tenants, this scheme reduces economic vulnerability and increases security for the beneficiary household. It’s good for both.”

If the refugee experience is one marked by insecurity, then renting property to Syrians provides remarkable security to the Lebanese landlord. Even with this year’s visa restrictions for Syrians, there remains a steady — albeit significantly reduced — flow of refugees pouring across Lebanon’s borders. With a severely limited supply of affordable housing, the market is weighted heavily in favor of Lebanese landlords.

“Syrians are made to pay a premium to reside in the same place,” HRW’s Houry told Executive. “There’s real pressure on the housing market. A landlord sees a desperate Syrian family and they’re going to try and make a quick buck.”

Unaware of housing options available in the local market and with limited funds, many Syrians like Asmar are forced into what little is affordable: rooms in shared houses. For landlords this provides far greater returns, even at the cost of rising rents for Lebanese locals.

Providing far greater returns, landlords are turning to Syrians, not local renters to make their money, pricing Lebanese looking for full apartments out of the market — a situation that both MoSA and UN partners told Executive they see as concerning. But with UNHCR estimating that rent from Syrians contributes $34 million monthly to the local economy, from a Lebanese perspective there is more than enough incentive to keep rents high.

Ultimately, the willingness to allow tenancies to go unregistered is the foremost obstacle to enacting regulation of the rental market. “When it comes to the benefits of the Lebanese hosts, municipalities do not stand against rental abuses — simply because there is a benefit to the people,” MoSA’s Kassem said. “Municipalities think elections — there is always a political dimension to the decision made.”