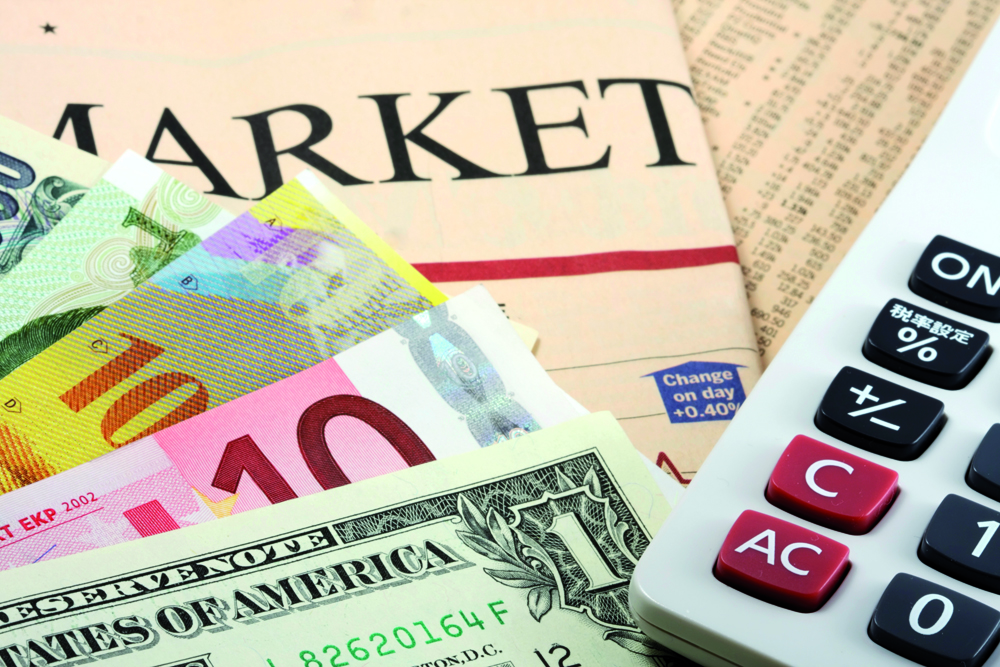 It has been documented beyond any question that when it comes to discussions of the outlook for the future, bankers are no more endowed with privileged knowledge or exclusive insights than the next best economist or fortune teller. The caveat against clairvoyance has been enforced in 2015, in no insignificant form, by the frantic performances of analysts and investors in their behavioral reactions to the yearlong grotesque search for the right moment to raise interest rates in the world’s – still – largest economy.

As the fallouts of the global uncertainty over America’s interest rate normalization are tapering out in the year’s waning weeks, Lebanese banks look to the regional future with sanguine humors interspersed with calculated expectations of more-of-the-same-as-2015 for the domestic economy.

Salim Sfeir, chairman of Bank of Beirut, expects import-boosting impacts on Lebanon to arise from the European setting, which will be tentatively positive for the bank. “The ECB’s quantitative easing will put some downside pressure on the euro. This depreciation in the single currency will lead to increased imports from Europe as Lebanon is essentially an importing country whose economy is dollarized. This is not only true for us, but also for the region whose economies are also dollar-oriented. Thus the decrease in the value of the euro will give Bank of Beirut an advantage for trade finance activities. How much this will act to the benefit of Bank of Beirut’s trade business, we cannot assess for the time being as this will depend [on] if the marginal increase in trade volumes offsets the marginal decrease in the USD value of the transactions,” he says.

In Sfeir’s view, monetary policy in the European Union will have a mixed influence on Bank of Beirut’s business. “The decrease in the value of the currency will certainly affect the trade finance aspect positively; on the other hand, new investment opportunities in Western Europe, as far as banking is concerned, are not on the positive side.  This is why we are now exploring avenues in Eastern Europe and continue to be optimistic for the near future.”

Impacts from regional and international developments will be determined not just by interest rate evolutions in global financial markets, but by oil prices that have a cost-mitigating effect on the Lebanese economy when they first unfolded between late 2014 and early 2015, says Alain Wanna, head of international financial markets and institutions at Byblos Bank. The first worry that he sees for Lebanon is, however, political and domestic.

“What will happen in US dollar interest rates is not the main issue for Byblos Bank and for the Lebanese banking sector. It is a factor, but the most important factor is the political uncertainty in Lebanon. Also more important than the dollar interest rates is the oil crisis, because what is the main source of the deposit growth in Lebanon? It’s Lebanese living abroad remitting to Lebanon, and the bulk of these Lebanese who remit to Lebanon live and work in the Gulf. Oil is the main driver for Gulf economies. It provides liquidity, the liquidity is placed with the banks, and the banks lend it to the private sector. Thus if governments [of oil exporting countries in the GCC] start withdrawing money from the banking sector, that means that the banking sector will no longer be lending,” he says. 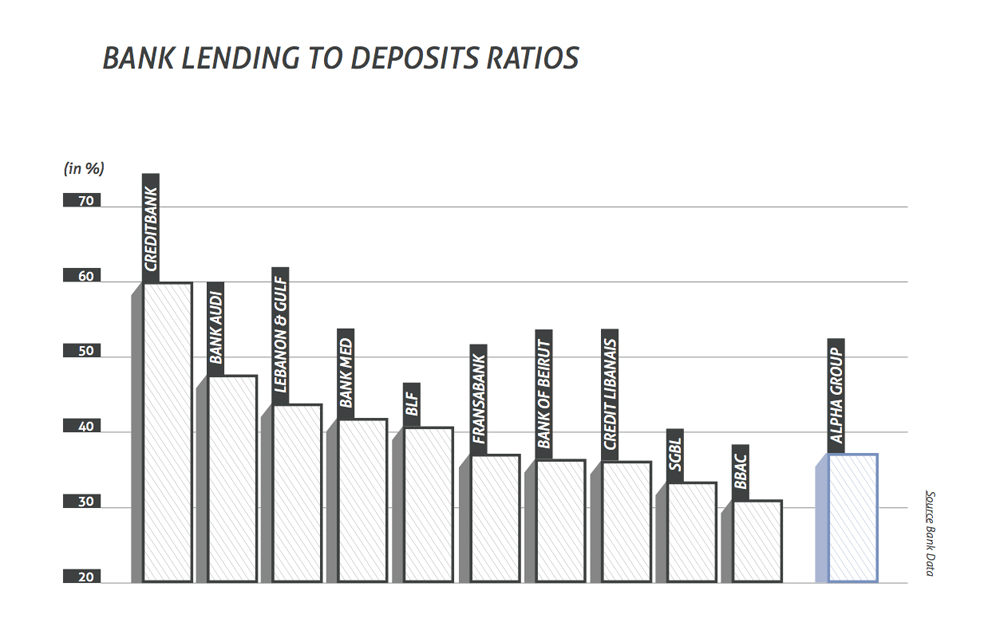 Reduced spending on infrastructure and restrained lending practices are likely to impact the incomes of Lebanese expatriates across the GCC and not just those working in the energy sector, Wanna adds when explaining why he sees the global oil price environment as a potential critical factor for monetary inflows to Lebanon in 2016.

From the perspective of the banking sector’s earnings, the short-term effect of interest rate normalization in the United States will actually be quite positive, according to views that have prevailed among bank economists for some time. This optimistic expectation from the banks’ perspective is based on a combination of factors, explains Freddie Baz, Bank Audi’s group strategy director. “The deposits in the Lebanese banking sector represent 3.5 times the gross domestic product in Lebanon. This means that we have ample liquidity levels and since we are dollarized; two thirds of this liquidity is in US dollars.” he says.

According to Baz, the placements of this liquidity are normally split between the Lebanese central bank and international correspondent banks. As deposits with either institutions generate interest at rates influenced by the Federal Reserve Bank’s decisions, Lebanese commercial banks stand to reap interest income benefits on both levels. Due to the mechanisms of international financial markets, banks can expect to receive additional basis points in interest “at least for the current year and the next year” when normalization is implemented, says Baz. The impact of normalization will, at some point, reach the Lebanese banking market and clients here will require upward adjustments of their interest receipts on deposits, but Baz does not expect this to occur until US prime rates climb to near the 2 percent mark.

Based on Fed statements that the interest rate normalization will most likely proceed not in regular steps but carefully reviewed small increments, expectations of federal funds rate levels to reach percentages of 1.5, 2, or more  have, from November 2015 onwards, been pointing closer to 2017 than any date in 2016. For average banking customers holding dollar assets, this does not offer great interest income prospects (although better ones than euro assets holders can hope to see in the EU). For Lebanese banks, the picture is better. “It’s easier for banks to manage their spreads in a high interest rate environment than in a low interest rate environment so we always manage to get benefits with time. But [in the near term] we will probably get 100 percent of the improvement in spreads because the interest already paid on our funding is much higher than the benchmark,” Baz suggests. He continues, explaining that “up until rates would reach, in my opinion, close to 2 percent, it won’t trigger in principle any pressure to increase cost of our deposits, so it will be a 100 percent impact. When we get closer to our cost of deposits in US dollars, then our customers will start to require more interest, so [the banks’ advantage from the interest rate developments] will probably be 80 percent [of the total] benefit for us, and then 70 percent, then 60 and 50; but there will always still be a positive carry on our deposits, after all those accumulated negative carries.” 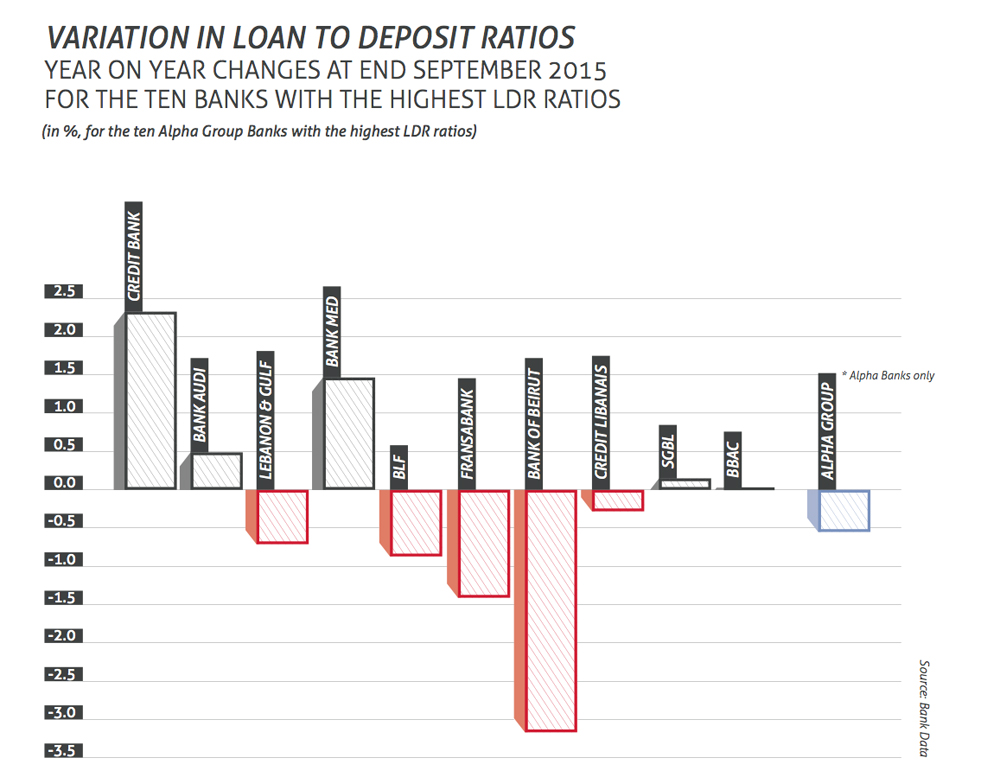 Looking at strategic opportunities in the settings of 2016, if all regional and national political and security factors were to remain the same, it would be a different form of challenge. Mergers do not necessarily warrant the strongest expectations for 2016, according to Sfeir. Whereas Bank of Beirut advanced by successfully implementing several inorganic acquisitions in the past, he tells Executive that the political environment in Lebanon is not ready and that, in the current environment, it is much better for banks with acquiring potential to use their energies to defend their market positions. He argues that the considerable energy required for combining two banking cultures into one can be used for greater rewards in pursuit of organic growth.

Abroad and at home

As for international expansions, one would err in expecting opportunities to be compelling and the Iranian option is not self-evident for the short term at all, Executive is told. “It is too early for us to speak about Iran. We have yet to see when the sanctions are removed and what sanctions are removed,” explains Saad Azhari, the chairman of Blom Bank. Rather than Iran or any distant country where Blom has no foothold yet, he says that Blom will focus on more familiar territories: “We are looking generally to expand our presence in the countries where we have networks and we are looking at additional countries especially in the Arab world, but there are no immediate plans.”

A solution to the political problems of Lebanon, then, would be the best platform for giving banks their best opportunities in 2016. Any assumption that banks have a benefit from the status quo of a dysfunctional state would be wronger than wrong, says Baz. “Do you think it is [in] the interest of banks to have poor political and economic governance? That this would sustain the good business environment that we need to prosper, to grow? — The answer is no. Everything which translates into improved political and economic governance is welcomed by the business community at large, not only by banks, but by banks more specifically.”