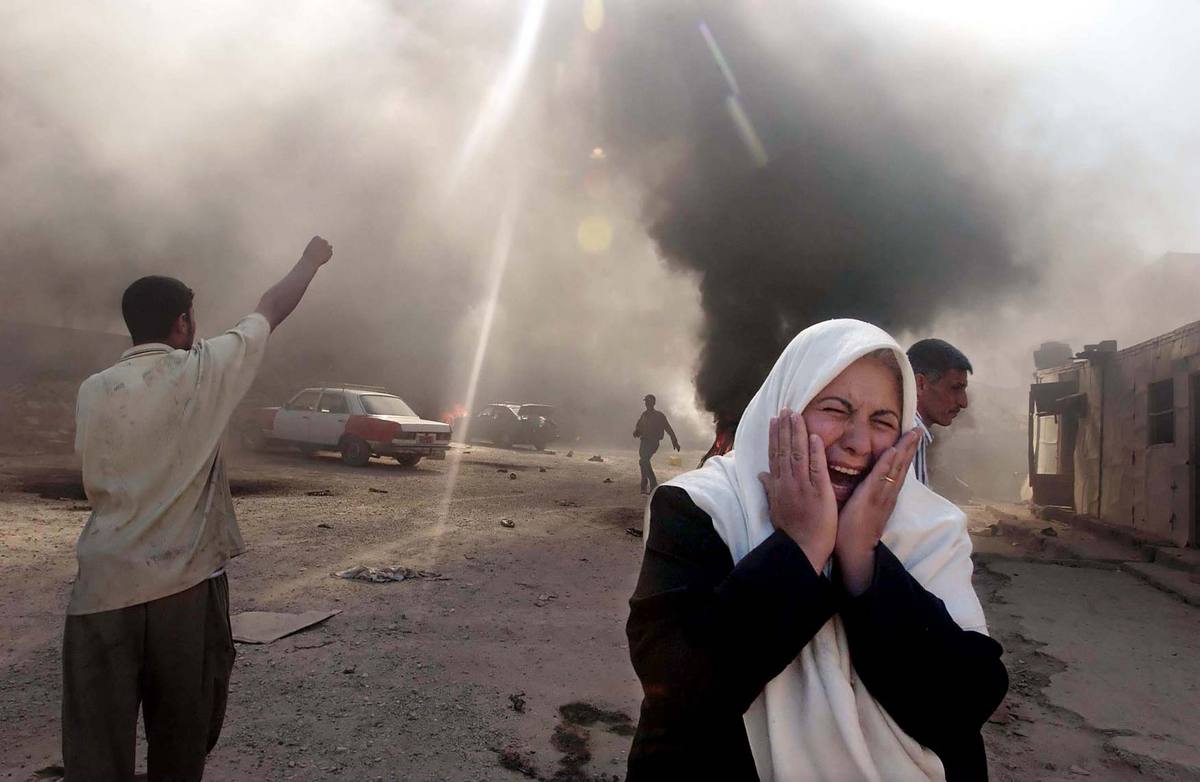 “No serious newspaper will survive in Iraq today unless the security situation improves. Advertisers aren’t interested. Locals can’t afford to spend much on a newspaper. As a newspaper owner, you’re in trouble,” said Mark Gordon-James, 25, the former finance director of the BAGHDAD BULLETIN, the English language newspaper that has gone belly-up. Established by a team of mainly young, adventurous British expatriates straight after the war, the paper showed early promise. Little did the team predict the persistent operational hazards – power outages to street crime – that would thwart growth from the beginning. All eventually kept advertisers at bay.

“Our mistake was to assume that Iraq would be better off three to five months after the war,” said Gordon-James who estimated losses at $20,000 and who argued that if there had been a genuine effort by the coalition to inject money into Iraq and get reconstruction underway, Iraq would have seen a massive influx of foreign investment.

“Instead, just nothing has happened,” he said bleakly back in London after spending over four months in Iraq. “The place has simply stagnated and started to decompose with the social rot that sets in when you take basic services away from a people – in other words, the collapse of the state.” Ralph Hassall, 24, a young British entrepreneur and graduate from Oxford University, recruited Gordon-James to handle the business side of the paper in May. “Within a week of hearing the idea and meeting Ralph, I was on a plane to Amman,” said Gordon-James, who at 25 was the Bulletin’s oldest staff member. “I thought it an entirely appropriate and essential project for Iraq … plus I found the idea of being an entrepreneur pretty attractive. Didn’t Richard Branson start like this?”

For his part, Hassall was inspired by his mother to start the paper whilst on a trip to the UK from Beirut, where he had been studying Arabic at the American University of Beirut (AUB).

“I spoke to my Mum and she said: ‘You know what they’re going to need in Iraq after the war? They’re going to need an English language newspaper,’” he said. Searching for investors, Hassall solicited start-up funds of $14,000 from what he described as “a wealthy banking friend.”

“A rich friend from Oxford gave me the start up cash. It’s a high risk venture that he did more as a favor for me,” said Hassall, who has an MA in chemistry from Oxford.

With funds in the bag, Hassall and Gordon-James braved the dangerous desert highway from Amman to Baghdad and published the first edition of the paper on June 9. Half of the initial $14,000 was spent on flights, a car, equipment and setting up the office in Baghdad. “Later, when things were looking positive, we got $10,000 more in seed capital from the same investor,” said Gordon-James, who added that the paper also received various donations of around $1,500 per month.

While inefficient printers and the difficulty of importing paper set the printing costs in Baghdad at $2,000 to $2,500 for a print run of 10,000, operational costs in Baghdad were generally cheap, said Gordon-James. “We were the cheapest newsmagazine in the world,” he said, estimating the entire costs of running the paper at $8,000 a month. “That is ridiculous for what it was.” At the height of operations, the paper employed 20 people, paying local staff members $50 per week – a huge salary for Iraqis who were used to being paid a pittance under sanctions-ravaged Iraq.

Nonetheless, without proper funding, the BAGHDAD BULLETIN was destined for failure. While the paper had ad agencies in Saudi Arabia (Saatchi & Saatchi) UAE and Jordan (Promoseven) and Kuwait (Impact/BBDO) lined up to sell advertising, only one ad was ever sold, despite the paper’s rate of 70 cents/cm2.

“We depended on growing ad sales relatively speedily in order to cover our operational costs, but they didn’t materialize because there was and is no vibrant business in Iraq,” said Gordon-James flatly. “No international companies are really interested in advertising in a pure Iraq-circulated paper while the country remains so volatile; they have to see a return for their investment, which is impossible from a country in crisis.”

Gordon-James said that if the paper had backing beyond its shoe-string budget, it could have grown through an international circulation in Jordan, Kuwait, the UAE and Saudi Arabia, building sustainable ad sales revenues on the back of this. “But as it was, we couldn’t afford to even send our director to Kuwait just to sign the distribution agreement,” he said. By the seventh issue, just when regional interest in the magazine was apparently taking off, the money ran out.

After flying close to bankruptcy for many weeks, the paper’s staff members were forced to evacuate Baghdad in mid-September. “We still exist as a company by the way and we could re-start tomorrow if we found financial support,” said Gordon-James, who would gladly travel back to Baghdad if decent funding were secured. “In the meantime we plan to run the BAGHDAD BULLETIN website as an information forum.”

Aside from enduring financial difficulties, the chaotic situation on the ground made it extremely difficult to get the paper off to print. Without a generator, the staff’s working hours were dictated by power outages that saw electricity flow between 2am and 4am. Security was also a serious concern. In July, Richard Wild, a young British journalist who had come to work in part for the BAGHDAD BULLETIN, was shot dead hailing a taxi on a Baghdad street at point blank range. “We were supposed to meet with him the evening he was killed,” said American David Enders, the paper’s 22-year-old former editor. “The staff, which was mostly young Brits, freaked out for the most part – as it seemed to drive home how dangerous the situation was in Iraq.”

At that point, Enders hired an armed security guard. “We didn’t have a gun in the house until that point, and we agreed to getting a guard after some [staff members] started saying they wanted their own weapons,” he said. “From then on, we always kept an AK-47 on the sofa by the front door.”

Back now in his relatively serene home city of Grand Rapids, Michigan, an exhausted Enders has time to reflect on his surreal experience in Baghdad. “At one point it almost felt like we were playing some sort of bizarre prank, printing a newsmagazine in a war zone,” said Enders, who was invited to edit the paper by Hassall after they met while he was a visiting student at AUB. He recalls a fitful night before the first edition went to print where the staff had a “solid freak-out” about how the paper would be received by Iraqis.

“We had a very eclectic group of guest contributors, from Daniel Pipes to a human shield, and we weren’t sure how they would be taken by the population at large. I was especially concerned about being viewed as cultural imperialists, and also didn’t know what would be totally taboo,” he said.

The paper originally relied on overseas contributors for content, yet later employed local and foreign journalists. The foreign journalists, mainly young British university graduates were not paid, rather offered board and a chance to further their journalism careers. “They got a lot out of it, because it’s experience that counts for foreign journalists. They have to make a name for themselves, and we gave them the perfect excuse and safety net to come to a flash point and cover it,” said Gordon-James. Two of the Bulletin’s former journalists are now working in Mosul and Basra, respectively, as stringers for Reuters, another in Baghdad for the BBC and the Associated Press.

While Enders and Gordon-James convey a sense of exhaustion about their time in Baghdad, they impart a sense of thrill about their extreme, almost action-movie like experience.

“We were caught in a number of close-quarter fire-fights, were on the scene of the UN bombing before the Americans, went to all-night raves with gun-firing party goers and hired Uday’s chief engineer and drinking partner as a distribution man,” said Gordon-James. “I almost crashed my car trying to swerve a dead body in the street … the bottle store next door to our house was shot-up in a drive-by shooting; a carjacker was nailed on our street by the neighbors; we were given one of Moktada Sadr’s only ever foreign interview, and we were called by an MP in London saying she’d just given Tony Blair an issue.”

While Gordon-James said he would have never risked the venture had he known the outlook for post-war Iraq, or the improbability of financial success given the start-up funding, he still views the founding of the paper as an achievement.

“Without hindsight, what we did within a month of the end of official hostilities was create an informative, balanced, insightful, publication driven by pure ideology and it was totally unexpected to everyone, especially Iraqis.”