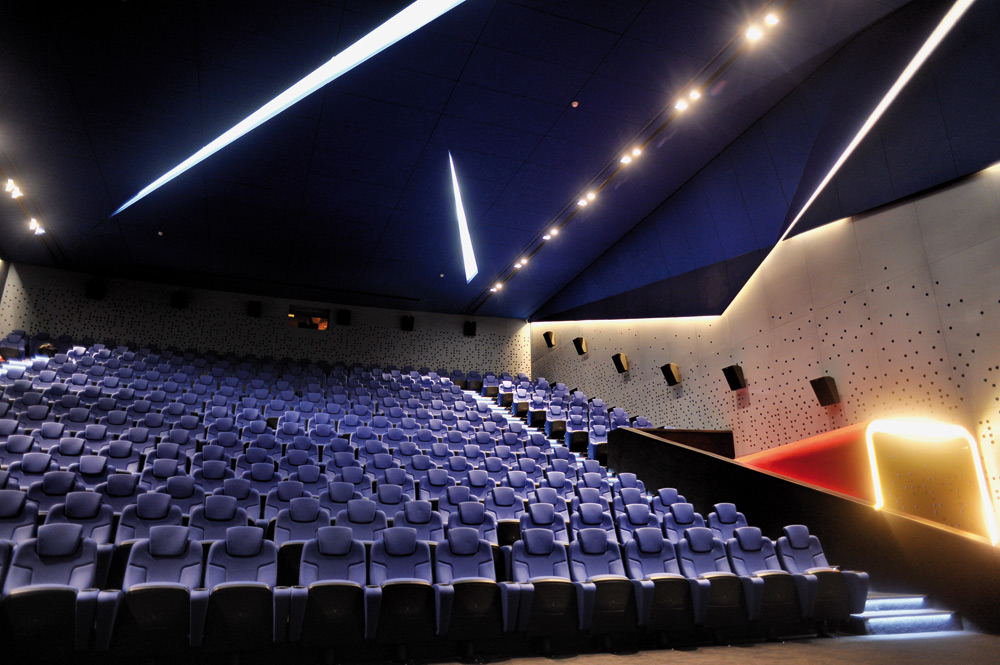 Walk into the Beirut Souks in downtown Beirut in the evening lately and there’s a noticeable buzz of activity that’s been long missed from the sometimes eerily quiet shopping area. The Beirut Souks Cinemacity is finally open and the Souks seem primed to receive the benefits.
The cinema is part of the second phase of Solidere’s original plan for the Souks area, explains Rami Ariss, land sales and real estate leasing division manager at Solidere, with the third and final phase being a department store which has been delayed due to “a few complications.”

It’s all in the design
The remaining part of the second phase is an entertainment center whose exterior structure is complete — and can be seen to the left side of the cinema complex — but whose concept is yet to be determined. “We are bidding for a concept but we decelerated work on it because we want something unique and distinguished. Also, we don’t want to open it in the uncertain times the country is facing and risk burning the concept,” explains Ariss, adding that the entertainment center should be open within a year but that for now Solidere is focusing on the new cinema. Solidere’s goal is to have the cinema be an anchor for the mall itself and increase overall footfall to the area.

Cinemacity, a partnership of Empire Cinemas and World Media Holding, a media company operating in the Middle East, collaborated with Solidere on the cinema. Both Empire and World Media Holding have their separate cinema-related operations in Lebanon and the region, with their first partnership being Cinemacity in Dora’s City Mall before moving on to the Beirut Souks.

The cinema is run and operated by Cinemacity with Solidere taking the role of both the landlord and a partner of the operating company.

Hammad Atassi, chairman and general manager of Beirut Souks Cinemacity, says over $25 million was invested into the project — “a big undertaking.” Solidere’s Ariss says that the company ensured no cost was spared to create something iconic that would be sustainable for many years to come. In fact, according to Ariss, one of the reasons for the delay in the theater’s opening date was that there were many details involving the aesthetics of the design to cover.

The multiplex stands apart from most cinema complexes in Lebanon, if only by nature of its size. While typical mall cinemas in Lebanon are 3,500 square meters, Beirut Souks Cinemacity — the only stand-alone multiplex in the country — spans 27,000 square meters and is the largest in the region.

The space is divided into 12 regular theaters and two VIP sections — with an 18 and half meter screen in two of the theaters. There are three food concession areas serving a variety of munchies ranging from typical cinema fare like popcorn and nachos to salads and sandwiches, as well as some shops on Allenby Street and a food court. Despite its size, the cinema does not have the most seats in the region, a trade-off,  Atassi says, for its comfort and aesthetics.

The project’s concept is based on visuals and vibrancy. The exterior architecture was created by Valode et Pistre and is enveloped in LED screens, visible from Allenby Street as one approaches the Souk area. The screen is part of the interactive façade of the cinema and displays ever-changing scenes, such as the Lebanese flag on Independence Day or various holiday images in December.

The interior was designed by Nabil Dada’s Dada and Associates, whose brief says they “worked in response to the distinctive external architecture of the cinema by modifying the internal volumes and seamlessly integrating cutting-edge technology into their design to create a young and vibrant atmosphere.” This is reflected by some interior features such as the vaulted ceiling lined with 256 LED screens and the 50 meter long corridor leading to the lower level theaters, with its projections of animations on both sides and the various uses of lights on the escalators and walkways to create moods within the structure. Aside from its design and technology, Beirut Souks Cinemacity’s location in downtown Beirut and the free use of the Beirut Souks parking for four hours also attract cinemagoers. “A city’s downtown is usually where the major cinemas are located and this was the case in Lebanon before the civil war, but not after it. This project was long overdue and deserves to get the kind of business it is getting now,” says Atassi.

A box office hit
The cinema’s performance has exceeded expectations and Atassi says that in his experience with other cinemas in Beirut new theaters in Lebanon usually take three to four months before they achieve their average ticket sales. Thanks to the project’s visibility, he continues, ticket sales at the Souks rapidly exceeded the 1,000 tickets daily margin and were closer to 3,000 a day, something that no new Lebanese cinema has achieved in such a short space of time. “We expect it to get a third of the share of the Lebanese box office shortly,” says Atassi.
December’s bombing in the downtown area adjacent to the Souks slowed admissions to 450 people but the number shot up to 1,700 the next night.

“Despite it having the same ticket price as other theaters in Lebanon [$8], the Beirut Souks Cinemacity is attracting high-end, mature customers who are drawn more to intellectual films than the latest adventure blockbusters,” says Atassi, adding that since they have so many theaters, they will be playing films for a longer time and also featuring independent films.
While it is too soon to tell whether the cinema has had any major impact on footfall in the Souks, Atassi tentatively attributes the increased activity and longer opening hours in the restaurants around the cinema to its presence. “It is difficult to tell if this is the usual holiday traffic for the Souks or an increase brought on by the cinemas. To be able to have a solid understanding of its impact on the Souks themselves, you need normal circumstances for the Souks. Now we will be able to see,” says Ariss.