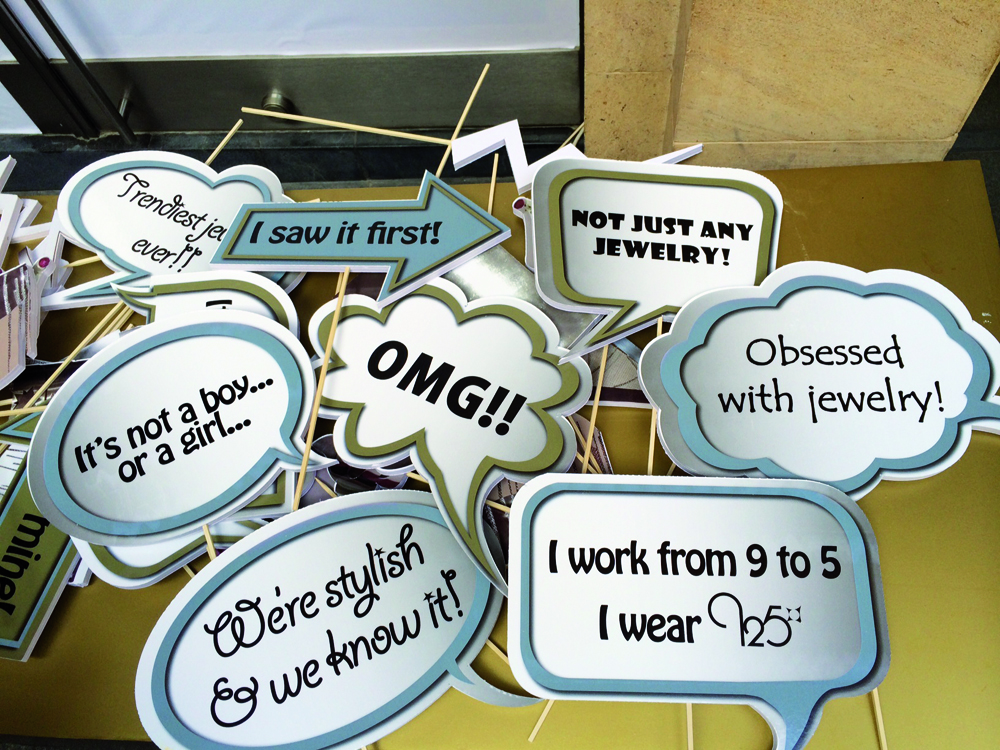 The fashion, the glamour, the luxury. Beirut has long been full of trend crazed, snazzy dressers and designers keen to leave their mark on the international scene. Beyond the obvious fashion victims and overly zealous devotion to cosmetic surgery, lies a city that regularly comes alive with exhibitions and events that celebrate local artistry, artisanship and talent with a vast selection of clothes, accessories and more. At Beirut Design Week (BDW), a week long gathering for the creative community, I bumped into Soniya Kirpalani during Hilary Alexander’s lecture on fashion journalism. The winner of many impressive awards, Kirpalani is best known for her acclaimed films and initiatives across different media platforms. She currently has her sights set on Lebanon and is working on a film about the local scene: “Plastic Fantastic”. And what comes next is the local scene as seen through her eyes with all the inherent challenges and vibrant potential.

To put things in context, it’s best to start with Kirpalani’s baby, SAME — South Asia & Middle East — Design, Culture, Creative Exchange. SAME is different from other such initiatives. It was born to “educate, engage, empower and employ” creative design and crafts communities across South Asia and the Middle East. It achieves this by establishing “networks between design institutions, councils and communities.” In Lebanon, Kirpalani initially got involved with BDW and the British Council, by hosting think tank sessions that focused on challenges and solutions for regional designers. The results were published in an annual report in 2013. Next came a series of articles, short online films (one of which was the story of Bourj Hammoud), eventually leading to the full-length feature film “Plastic Fantastic”.

Kirpalani has “always been mesmerized by the Lebanese spirit of resistance, their passion for life and their inherent ability to create beauty even amidst strife.” The desire to experience this firsthand brought her to the country. “Coming to Lebanon I met visionary thinkers stirring change … This made me want to document the entire [contrast], the diametric differences, capturing change as it happens and to share Lebanon’s inspiring stories with the world,” she says.

Lebanon was once the Middle East’s creative capital. A place where the crafts industries and creative talents flourished. Over the years several factors led to its rapid decline, according to Kirpalani. Without support, subsidies or consumer patronage, it has become difficult for Lebanon to develop its brands, plus international brands are all the rage at the moment — further eroding the confidence and sustainability of local brands.

And yet there’s a cultural revolution. “Lebanon is still riddled with tension. The borders echo with war and I see streets in Beirut filled with refugees from across the border,” says Kirpalani. “In juxtaposition I also see art, films, fashion and design shine … I met visionaries like Kamal Mouzawak, Sarah Beydoun [see “Luxury from behind bars“] and Doreen Maya selflessly giving up their careers to save others’ dreams. Developing collaborative initiatives, using the lens of culture, creativity and cuisine they educate grassroots talents. Then they provide podiums for them to earn livelihoods … Through them I have met many more cultural thinkers — Karim Chaya, Rabih Kayrouz, Nada Debs [see “Modernizing tradition“], Rana Salem, Sevag D, the Artisan Initiative and Creative Space, visibly stirring Lebanon’s pride.”

Kirpalani’s past cinematic work about the industry in Asia and the Gulf (“Indiavisualism”, “Silken Synergy” and “DoBuy”) “all capture the silent heartwarming stories of people rebelling against their ‘outsource only’ economies. Fostering grassroots movement, with rural weavers, craftspeople and local artisans, they are educating and engaging their talent to build creative economies, in nations sold to western brands.” And now “Plastic Fantastic” adds a new layer of fabric. The film is the story of Kamal, Sarah and Doreen. As Kirpalani explains, “It is shot in both their personal and professional spaces. It captures their challenges in the pathway of change. Set in the backdrop of a rapidly evolving Lebanon, it attempts to capture the people’s spirit of resistance. Revealing the beauty of this diverse land, it is an extempore exploration into the mindset [of] people finding creative solutions to build sustainability. Visually, too, I seek to capture Lebanon’s diverse geography, its people, its mindsets and what is inspiring them to subtly say ‘NO’ to war, even amidst a ricocheting Arab Spring.” The film will be out at the end of 2015 with screenings at high profile international film festivals.

As Kirpalani sees it, on a global level, luxury isn’t about ‘big brands’ ‘expensive’ or ‘showing off logos’ anymore. The recession gave consumers a reality check, redefining luxury. Now brands are increasingly highlighting everything ‘handmade’ and ‘ethical and sustainable’ since “consumers aren’t looking for mass market products coming from sweatshops.” And yet in Lebanon “it is strangely still about ‘statuses and brand brag.’ Consumers prefer patronizing ‘international brands’ over local ones. The result is visible across Lebanon’s shopping malls and streets. This has taken its toll by bleaching arts and crafts culture. The talent languishes without patronage. But this is changing. Education and experience are bringing a new maturity to the mindset of affluent consumers. There is a change in the region’s crafts philosophy, artisanal food, small creative businesses and locally made products, functional design, architectural language and fashion.”