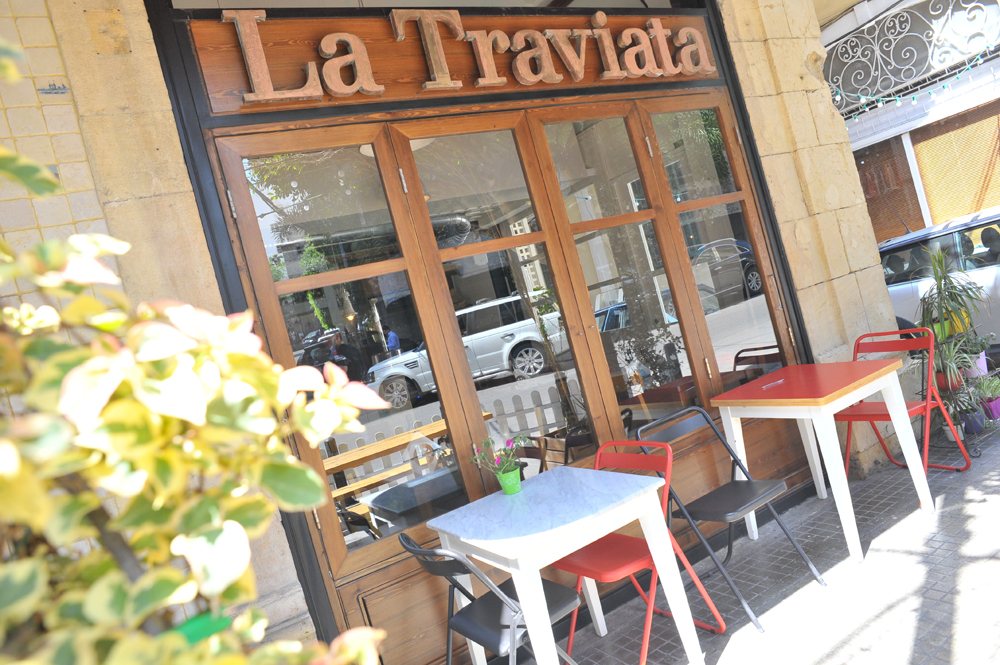 “I want people to walk through that door and feel they are in Italy,” says Christian Bou Chaaya, the owner of the Lebanese branch of La Traviata, a cozy 25-year-old family-run restaurant in Bologna, the culinary capital of Italy. He is proud to have brought the little Italian restaurant across the Mediterranean to Beirut.

Bou Chaaya, who has a background in hospitality and event planning in Qatar, had always planned to open his own venue in his home city, Beirut. On a business trip to Italy, he visited La Traviata by chance and fell in love with its authenticity, immediately deciding that it should be the restaurant through which he realizes his plan.

After some initial research revealed that La Traviata was ranked number one among Bologna’s 360 restaurants on the travel website Trip Advisor, Bou Chaaya was even more convinced of his choice, and he decided to approach the family with the idea of franchising a branch in Lebanon. The matron, Manuela Sabbatino, was easily swayed.“They were happy that someone was interested in expanding their business [even] before knowing my background and what I could provide them with,” he says.

So began a two year stint in La Traviata’s kitchen where Bou Chaaya — who says his knowledge in the kitchen was lacking — learned all of Sabbatino’s recipes, the way she thinks before cooking and how to choose and find the best ingredients. “I needed to know every aspect of the kitchen so I am not affected if a chef decides to leave,” he says, adding that this is the basis of the restaurant business, especially in Lebanon.

With his training complete, Bou Chaaya entered with the family as a 15 percent shareholder in La Traviata Bologna and vice versa. “This was to ensure good faith, coordination and communication,” explains Bou Chaaya. Even today, the two shareholders start their day with email communications deciding on new recipe ideas or ingredients.

Nestled on a corner of Gemmayze’s Pasteur Street, La Traviata’s investment size was close to $400,000. Bou Chaaya admits that the price tag was steep but says no expense was spared in recreating the spirit of the original venue without falling victim to duplicating it exactly and appearing fake. “I even got the tiles on the bar from Italy,” he says.

With a maximum seating capacity of 55 customers when its exterior and interior are combined, La Traviata is indeed a cozy eatery. The outdoor seating area, on the sidewalk under the venue’s red awnings and next to various plants, is reminiscent of Europe’s chic sidewalk cafes even if a little too exposed to Beirut’s honking cars and traffic.

Designed by Lebanese architectural company C-Lab, the interior is charming and indeed no detail, from the classical Italian music playing in the background to the choice of dainty yet simple cutlery used, is spared to create an authentic Italian experience for the customer. The walls are adorned with black and white reprints of people eating strings of pasta in different manners — the same reprints are found in Bologna’s La Traviata — and a large wall painting of a family portrait. To the back of the venue is a red window frame around a TV screen depicting the exact view enjoyed by those sitting in Bologna which changes with the weather and passage of time.

But the highlight of La Traviata is the food, which Bou Chaaya, just like Sabbatino, prepares from scratch on a daily basis. Bou Chaaya explains that he does not have any dry pasta or machinery but prepares and cuts the pasta by hand which is why the menu features only tagliatelle, ravioli and tortellini — three kinds of pasta which don’t need to be machine cut.

La Traviata only has service fridges and no storage space, meaning nothing can be kept for the next day. Leftovers are given to the staff at the end of the day. Bou Chaaya sees this as both a blessing, since it means his food is always fresh, and a curse, as it leads to a higher cost.

“I believe it is not how you cook, but what you buy which makes a good dish; a basic recipe with quality ingredients can be amazing,” says Bou Chaaya, who imports all his main ingredients (except for the olive oil) from Italy either directly or through wholesalers for larger quantities.

Though the recipes were quite simple, the freshness and quality of the ingredients could be tasted with every bite. The meal started off with a selection of Italian wine from the wide, yet affordable, list provided and a complimentary platter of granular Reggiano parmesan cheese and mortadella chunks served with bread.

The bacon wrapped mozzarella cheese we ordered for appetizers was an interesting blend of sour from the balsamic dressing and salty from the melting cheese. As for our ravioli and tortellini main courses, which came highly recommended from our friendly and well-informed waiter, they were perfectly al dente. The right amount of cheese was used in the stuffing so as not to hide the pasta’s taste.

We finished off our meal with strong espressos made from coffee beans that Bou Chaaya imports from an Italian family who make their own special blend.

The total bill was $60, making it an affordable place for the quality it offers.

La Traviata currently has an average daily turnover of 65 customers but Bou Chaaya, who has until now relied on word of mouth for promotion, is about to start a social media marketing campaign in an attempt to increase that number. “I wanted it to be the kind of place one discovers alone, but I need to increase the turnover. It’s a business after all,” he says, adding that he hopes to recoup his investment in three years.

Though Bou Chaaya claims to enjoy the competition with other Italian venues in Lebanon, he says all hospitality venues in the country are competing with each other for a very narrow market of people who go out. He is considering expanding the concept to Abu Dhabi, which has lower rents and less competition than Dubai.

As for Lebanon, Bou Chaaya is not done yet. He hopes to one day open a seaside venue outside of Beirut that will appeal to customers in the summer.