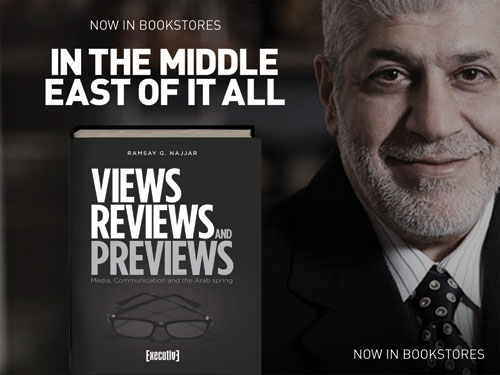 The new book by Lebanese communications consultant and former ad-man Ramsay Najjar, “Views, Reviews, and Previews”, in intellectual association with Executive, is a tour de force of theories, recommendations and projections on the pivotal role of communications and journalism in the history of humanity, as well as in the unfolding of the Arab uprisings. Executive sat with the author to chat about his latest work.

What motivated you to write this book?

The driving force that pushed me to write this book was that I discovered, to my surprise, that we lacked a serious source on the deed of communications in this part of the world. A reference sounds a bit too academic, but this was the driving force. But that was the second reason, the less important. The first was the ‘Arab Spring’. I always had a theory that in this part of the world, [with maturity of legislative, executive and judiciary being a long way off], the fourth pillar — communication — might be our only shortcut and roadmap to real democracy. That is why when the ‘Arab Spring’ started, I felt ‘this is my theory!’ and I wanted to grab the opportunity to prove this was opening a window to reach democracy, which we always thought to be beyond our nature and beyond the organic gifts that were given to the Arabs.

Would you be able to summarize your book in three words?

The title is doing exactly what you are asking me to do. We have views, in the sense that we are writing about the essence of communication from its start with the dawn of humanity until today. The ‘reviews’ is a connection between this and the real life, be it in politics, in the lives of society, in struggles, in war, everything where communication becomes organically linked to the game of life, and the third part was the preview and the ‘Arab Spring’, how can we make sure that communication can be the real safety net that would guarantee for this change to be positive and evolutionary.

Some key words appear quite frequently in your book, one that you emphasized yourself was ‘nuances’ and another one was ‘noble’. Both terms are rarely used in connection with the topics of journalism and advertising. Are these translations from Arabic concepts?

These are original to the English book and the proof of that is that the Arabic version does not have an equivalent of the term nuance. This word is key in my book because I meant to write an ethical chart that people in media should respect and abide by. Nuances are strategic because of three chapters in my book where I meant to create a certain equilibrium that will help the reader understand why the media is the fourth estate, why it was given the privilege of being the only tool that the citizen has to practice his democratic belonging to a system to observe and render his rulers accountable and liable.

Even more frequently than nuances, noble appears more than 120 times in the first 250 pages, or on average on every second page. Why do you stress so much on media as a noble cause and journalism as a noble profession?

Nobility is lacking in this part of the world. I think that we have imported the concept of media without its noble dimension. Even professionals in this line of business have a tendency of forgetting that they are in this noble cause. Only when they die, we remember that they are on a noble mission. My theory is that this fourth pillar can build the ‘temple of democracy’.

In the sixth chapter you defend the role of advertising and talk of its noble mission and benefits. Why is that a separate chapter?

All my life I felt that advertising is really underrated in this part of the world; that is what I try to say in that chapter. Also, the practitioners of advertising never have the time or motivation to defend themselves and their profession in the way I try to do.

Do you see it as realistic description when you say the journalist of the past was “super human, intelligent, enlightened, noble, daring, combative, and exemplary in seeking the truth and amplifying the voice of right and its achievements”?

Let us say it is the 17th or 18th century and you are recruiting a reporter. Would you have accepted to recruit someone who is less than that? In the early 20th century, you would have had Andre Gide, Albert Camus — those were the people with the profile of a journalist.

So you are not talking about the average practitioner of journalism?

No, I set a precept. Let us take Jean-Jacques Rousseau in the Renaissance; he was a journalist. Victor Hugo was a journalist. Milton, Baudelaire were journalists. Take the Arab example of what we pretend to call the Renaissance period, the Mohammed Abduh, Mohammed Ridha, Jurji Zaydan. All these were not only journalists but saw the fulfillment of their humanity would only be achieved if they either launch a newspaper or have a publishing house.

When you say that only the voluntary soldier and the journalist willingly face death, you seem to be saying that the journalist has something of a martyr impulse.

If he wants to abide by my ethical chart, yes.

You speak of a journalistic oath. How would one want to go about implementing this?

If doctors have it, engineers, pharmacists, and lawyers have it, I don’t see why we are until today not imposing on journalists to have a professional oath. Under the assimilation theory that I believe in, this [oath] will push you as journalist to be more disciplined. I am not saying that every single journalist will become a saint over night by respecting the code but at least it is the right way to go.

In your opinion, when you think of journalism as the brightest jewel in the crown of humanity, and taking all things into consideration, will quality journalism come back to the Middle East? Under your anthropological postulate will this new journalism provide leadership in the future and will your book help in giving birth to this journalism?

For me, the journalist should play the role of a catalyst, to empower the citizen to become more mature, more aware and vaccinated against all those diseases and viruses [of bad societies]. I believe that the ‘Arab Spring’ is definitely the opportunity for communication to play the role that is lacking in this part of the world, of empowering people to kind of elevate their IQ from instinct to the mind. I totally believe in that.

At the end of your book you develop scenarios on the future. How much probability do you give to this scenario where journalism as the fourth estate gives birth to democracy?

As a consultant I am not supposed to be present in the sense of ego. I am telling you that there is a scientific probability that is solid. Now, my personal subjective opinion is on a totally separate track but I believe it is possible and I can defend this. If four specific coordinates — the demographics, the freedom of expression, the law of ownership of media, the auto-regulation — are respected to the letter, the chances are very high. If they are not, we are doomed. We will go from bad to worse.

So its either good journalism or dictatorship?

Exactly. That is how I see it.