Culture in Lebanon is a mosaic of many histories and identities, from the most ancient of civilizational triumphs—such as the sarcophagi exhibited at Mathaf, the National Museum—to the reconstruction and re-imagination of Beirut’s urban core that began in the last decade of the 20th century and is still progressing in the Beirut Central District.

In 2017, a missing piece in the puzzle has finally been opened to the public with Beit Beirut’s soft launch (meaning no big event, no big fanfare, no speech or drink). In the context of Lebanese museums and some showy—but not always vibrant—art spaces, such as the two-year-old Aishti Foundation, Beit Beirut stands out as an honest building that opens perspectives on local identities and the 20th century trauma of the Lebanese conflict.

Even if the museum’s exhibition concept and content were to move onto other trajectories, the historic essence and presence of Beit Beirut is testimony to the potential for and repercussions of civil war. And just in a few more years, the Lebanese capital is scheduled to open another important window into contemporary culture, when the Beirut Museum of Arts (BeMA) will open in 2020, as envisioned by the Association for Promotion and Exhibition of Arts in Lebanon (APEAL).

The opening of a new museum in 2017 positions Beirut on a Middle Eastern cultural axis that has old and new anchor points, but that is overall still very much evolving. Along this axis—where ancient locales from Ugarit and Palmyra to Petra and Jerash testify to the region’s overflowing heritage of diverse civilizations, and in 2017 newly appointed world heritage sites like Hebron in occupied Palestine, Yazd in Iran, and Aphrodisias in Anatolia, Turkey remind us also of the political importance of respecting cultures—there also are new museums with claim to global fame that have opened in the last quarter of 2017 or have been officially announced for 2018.

The first of the two mega-shrines to art and culture is the Louvre Abu Dhabi, which at last opened in November 2017, and the second the Grand Egyptian Museum (GEM), which is under construction in Giza, near Cairo, and is slated to partially open in 2018. Needless to say, these two edifices of human achievement—the future GEM is advertised as the world’s largest archeological museum—are in a completely different league of financial expenditure compared to the Lebanese scale. 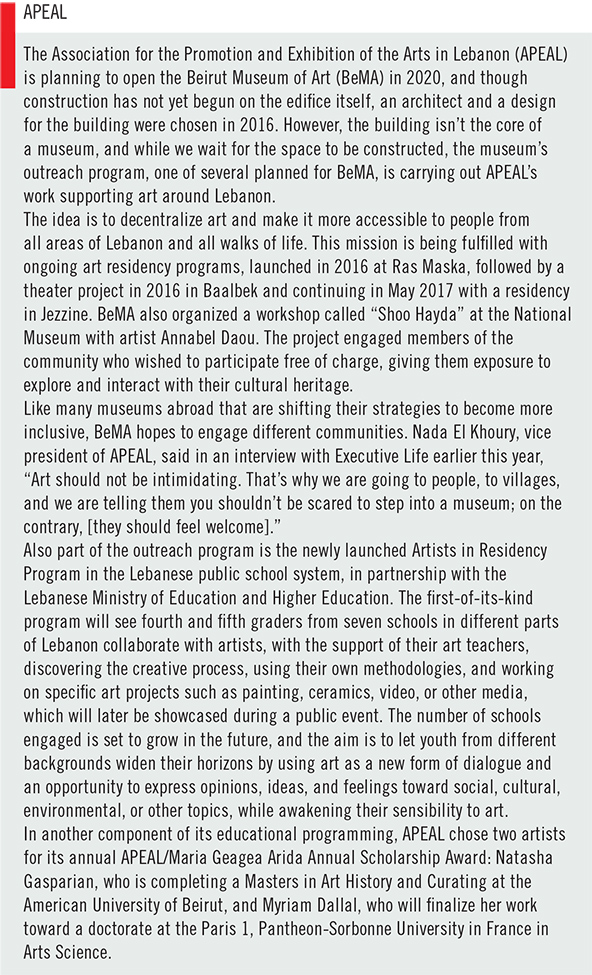 The construction, branding, and consulting cost of the Louvre Abu Dhabi is believed to be around $2 billion, and GEM construction was estimated in late 2017 to be just shy of $800 million. The creation of Beit Beirut out of the preserved Barakat Building and the construction of a new annex building, according to Beirut city officials, required some $18 million, and no branding cost (or final use concept) has been heard of at the time of writing.

However, it is not important that Beit Beirut is a small edifice of culture that is dwarfed by the region’s bigger museums. Culture is not quantifiable in any way. Culture has too many edges and too much volume to be a tradable commodity or asset. Even when passing on culture to close relatives, it will be reinterpreted by the new owner, who has a different way of seeing things, appreciating beauty, defining esthetic value, and organizing the personal cultural sphere and its contents.

When the passing of identity items and memories from the old to the new generation is disrupted by war and destruction, the transaction is made more difficult, and cultural value can be lost entirely, until somebody comes by 20, 30, 100, or 3,000 years later, digs through the rubble, and finds items deserving to be rescued and treasured. Then, a museum might be born and developed at considerable cost and long-term immeasurable reward.

Bridging the gaps between past and present

On the level of communities and large social bodies, the cultural continuum of Lebanon, with all its disruptions and testimonies of disruptions, forms a treasure chamber for the mind where the here and now can interact with myriad moments in history and relive them. This Lebanese continuum, or cultural sphere, is one-of-a-kind, and allows one to step between today and different eras that reach back as far as four millennia or as near as 30 or 100 years.

One step, and there is Beirut’s glitzy shopping mile; the next step, and there is a Roman ruin. One step, there is a digitally enabled office tower for the 21st century; the next step, and there is a Phoenician port. As a new space designed for cultural memory and public access, Beit Beirut offers the option to transition in one seamless step between today and the Lebanese past of the 20th century. With the quiet shift of the Barakat Building, located on the old Green Line in the Ashrafieh district, from restoration project into operations in 2017, it is now possible to dance between the present reality and a very specific and burdened part of the past. Moreover, thanks to the integration of old and new in the structure of the Beit Beirut, one can step-dance through this museum in a perfect dabke between the Beirut of snipers and the Beirut of artists.

Drawing upon similar intersections of violence and peace and of past and present, Zad Moultaka represented Lebanon in front of a global art audience at the Venice Biennale this year with his project, ŠamaŠ, a powerful installation that parallels the Arab region’s violent history and present-day. Though Lebanon didn’t participate in the prestigious event two years ago, in 2017, two other Lebanese artists also made it to Venice: Lebanese-Armenian Jean Boghossian exhibited in the Armenian pavilion, and living legend of feminine art and design Huguette Caland displayed her work at the Biennale’s main exhibition, Viva Arte Viva. With the public sector granting only moral support to artists representing the nation, one wonders what Lebanese artists would create with the funding of more developed nations.

Zeina Arida, the director of Beirut’s Sursock Museum, says the international art community is definitely paying attention to contemporary artists from the region, and specifically to Lebanon. In fact, she says they’ve been paying attention for over 20 years, but that the scrutiny has increased more and more. The evidence: Many Lebanese artists are present in prominent art collections and exhibitions worldwide, and are winning art-related awards. 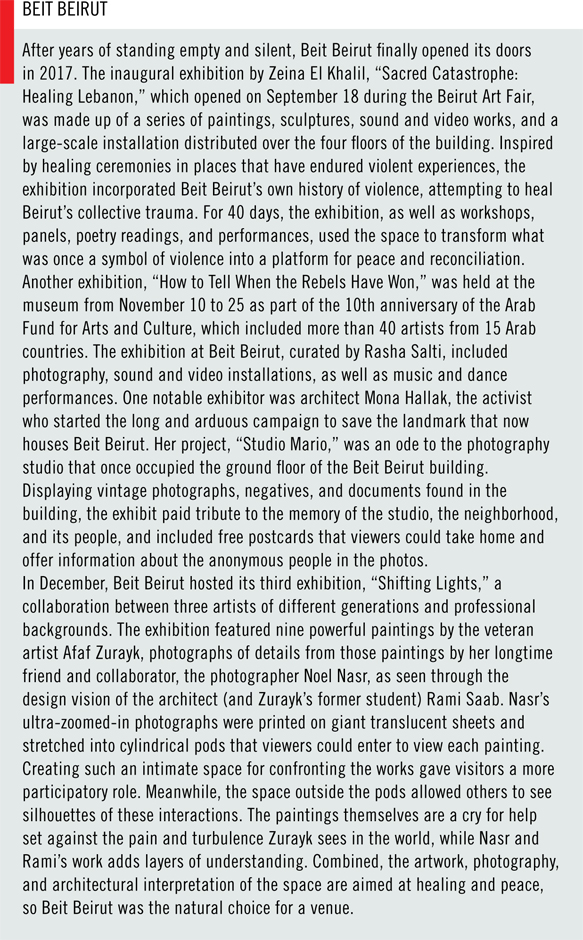 This is one of the reasons Lebanon’s film industry is trying to collaborate with other countries on co-productions: to benefit from foreign funding. In parallel, a funding scheme is still being developed to make cinema a viable sector for investors. Ultimately, it isn’t just the funds backing a film that count, but the talent working on it, which is why the continuation of script workshops put on by the non-profit Fondation Liban Cinema (FLC) is so important, along with exposure to and interaction with talented filmmakers who have “made it,” both locally and abroad, at film festivals held in Lebanon.

As far as other expansions of the Lebanese realms of culture in 2017, the continued development of design departments at noted universities such as the Lebanese Academy of Fine Arts, the Lebanese American University, and the American University of Beirut (AUB) deserves acknowledgement. AUB launched a newly created Master’s Program in Art History and Curating this year, while École Supérieure des Affaires, taking on culture from a financial perspective, began offering an Arts Management certificate. 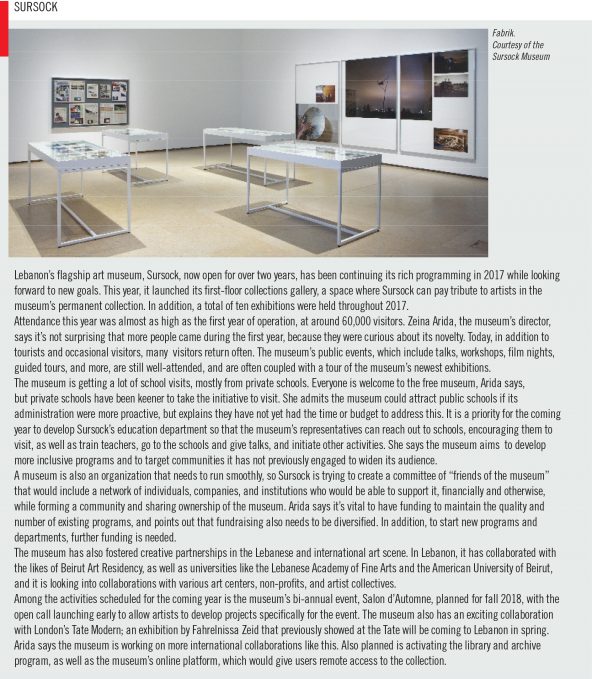 Showing off the talent

This rising wave of talent appreciation and development appropriately found further expression, both esthetic and financial, through the new Beirut Design Fair that was held for the first time alongside the Beirut Art Fair. Both events were successes beyond the organizers’ economic expectations. Beirut Design Fair aims to firmly establish the Lebanese capital as a regional center of attraction for design, following the path pioneered by Beirut Design Week. Now in its fifth year, Beirut Design Week in May 2017 asked participants provocatively whether design was a need, and got responses ranging from mundane objects like utensils and street signs, to social-impact initiatives and cultural heritage preservation projects. The question encouraged the public to reconsider stereotypical definitions of design, looking at it as a problem-solving discipline instead, and it got organizers to ask themselves how their own event impacts the industry.

Held in September, the Beirut Design Fair’s first edition was well received by the public, complementing the art fair next door. The 8th edition of the Beirut Art Fair, a place for discovering new artists, featured 51 galleries from 23 countries, and was attended by over 28,000 visitors. (All those figures climbed from previous years.) The fair’s central exhibition, “Ourouba, The Eye of Lebanon,” was made up of contemporary Arab art curated by Rose Issa, presented pieces from public and private collections in Lebanon.

Issa said the personal Lebanese art collections which she could access in the process of curating are “quite different from certain monumental institutional collections developed under ongoing censorship in the Gulf.” The notion of authentic rather than flamboyant art treasures in private Lebanese collections actually can strike the culture enthusiast quite unexpectedly, as in a small show exploring the relation between art and revolution in the Middle East that runs from late November 2017 through February 2018. The exhibition at the AUB on-campus gallery, curated by Octavian Esanu on occasion of the 100th anniversary of the communist “October Revolution,”  surprised with a portrait from the Mao Zedong series of pop art legend Andy Warhol, on loan from a “private collection” in Beirut.

Also of note is the rise in summer festivals, which have reached record numbers in 2017 and have spread far beyond the established festival brands of Baalbeck, Beiteddine, and Byblos, to small towns and cities like Tripoli and Zahle. While the high number of events are an indication of interest and community effort, they aren’t necessarily good for festivals economically, as some festival organizers point out that their (already huge) challenges only increase when there are too many people trying to get a tiny piece of the same pie.

These festivals added to the growing appeal of other musical and performing-arts events seeking to widen awareness and popular appreciation of culture, such as the Beirut Museums Night in April and various multi-venue events such as the Fête de la Musique in June and Beirut Chants in December. Culture, despite all that could have disrupted its rise in 2017, underscored its resilience as a Lebanese asset with exceptional growth potential, which will likely continue to grow in the coming years .