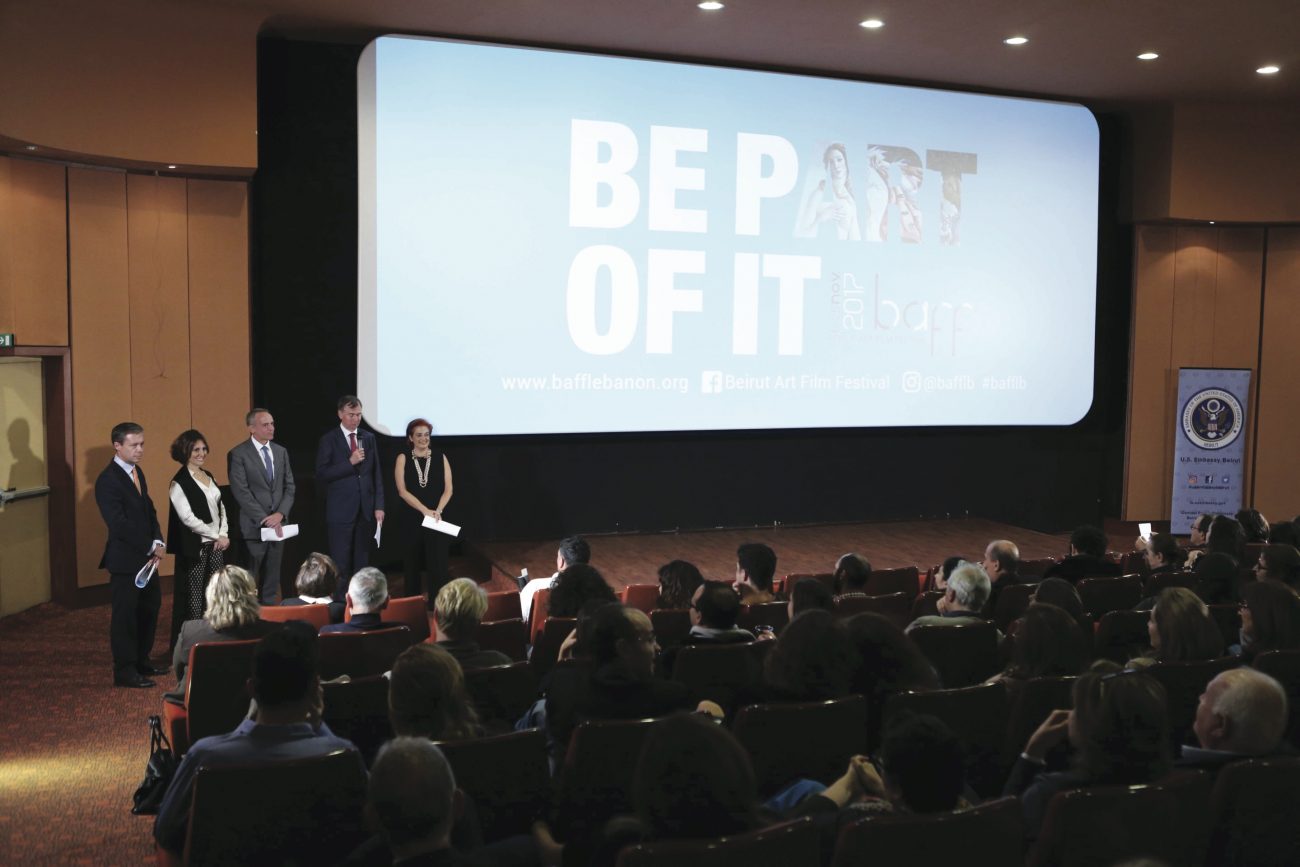 Lebanon’s cinema industry is improving in terms of quantity and quality, with more films being made since the early 2000s, and film industry experts agreeing that the standards of the productions themselves are much higher than before. 2017 was a good year for the Lebanese film industry, with the release of acclaimed movies, reoccurring festivals showcasing local and international productions, and an even better presence abroad. Maya de Freige, the director of Fondation Liban Cinema (FLC), a non-profit supporting the local film industry, says Lebanese cinema is developing and expanding to the point where we can now really call it an industry. However, the challenge remains to find more financing for local filmmakers, as well as a continued emphasis on making quality films that are also commercially successful–a rare intersection even for international powerhouses, and all the more difficult for Lebanon because its small population means films need to appeal to a wider audience.

The good news, de Freige says, is that films are becoming increasingly more diverse. In the past, many films were about the Lebanese Civil War, but now the war has become more of a backdrop than a main part of the story, with the prime example being this year’s acclaimed drama “The Insult” by Ziad Doueiri. While Lebanon’s cinema is dominated by dramas, there are more and more genres, including comedies like “Tombé du Ciel,” “Mahbas,” and “The Traveller,” risque romances like “Listen,” and action movies like “Very Big Shot” and “Nuts.”

The films anticipated for release in Lebanon in 2018 include power couple Joanna and Khalil Joreige’s drama “The Notebooks,” another drama by Michel Kammoun called “Beirut Hold’em,” Nadim Tabet’s “One of These Days,” a documentary called “Panoptic” by Rana Eid, Lucien Bourjeily’s “Heaven Without People,” and the highly anticipated Nadine Labaki film, the title of which hasn’t been revealed at time of writing.

Many recent films have also made the festival circuits, both abroad and in Lebanon. Not only are festivals a great platform for more international audiences to see Lebanese films—or generally, films that are not typically shown in cinemas—but they are also a way for the filmmakers themselves to see what’s out there, which is why it’s so important to have festivals in Lebanon that show both local and international movies. Beirut International Film Festival (BIFF) director Colette Naufal says filmmakers must see more foreign movies because they can learn a lot by watching the work of others.

Celebrating 20 years in 2017, BIFF had close to 60 international and local films in its program. Held in October, it opened with the political drama “La Cordillera” by Argentinian director Santiago Mitre, held in the presence of the director as well as his wife and actress in the movie, Dolores Fonzi, and closed with Hugh Welchman and Dorota Kobiela’s visual masterpiece “Loving Vincent,” about the last days of Vincent Van Gogh. Every year, many features are winners of global awards or are screened in international competitions.

The festival is also a platform to highlight important political and social issues in the region. This year, two documentaries and five short films were from Lebanon, and, while not included in the competitions and categories, there were six short films about Lebanon before the outbreak of the war in 1975, offered by the Ministry of Tourism. Awards went to Iranian and Turkish films, and one film from Saudi Arabia. Naufal stresses they choose the program based on quality, and just because it is a Lebanese festival doesn’t mean they give priority to Lebanese films. Incidentally, in 2016 there were more Lebanese films featured in the selection, but it just so happened that this year’s Lebanese films were more commercial than festival-types, she explains. The aim of BIFF has “always been to bring [people] arthouse films that are not released in theaters,” says Naufal, adding that another goal is to “invite producers and directors to meet Lebanese filmmakers. You never know where that takes them.”

One festival exclusively dedicated to showing Lebanese productions is the Lebanese Film Festival (LFF). The bi-annual event alternates years with another festival, which showcases films from the region, Ayam Beirut Al Cinema’iya, which was held in March 2017. The next edition of LFF is planned for 2018. LFF became bi-annual in 2012, in an effort to have a bigger event each time, rather than having fewer films annually, and also because organizers are mostly volunteers, says Pierre Sarraf, one of its founders. He adds that the event is a meeting point for the local industry and a reference for foreign festivals picking movies for their own programs. Since its inception in 2001, the number of films applying to the festival has jumped from 20 films in the first, to almost 200 in its last edition. “The quality is improving too. Many of the films in our program participated in major class A or B festivals around the world,” he  says.

This year’s Beirut Art Film Festival, its third edition, held in November, was dedicated to screening a more artistic repertoire of films. This festival is divided into two parts, screenings in Sofil (Intramuros) and the various external screens in schools and universities (Extramuros), and does not give awards, but is instead a platform for thematic films that are related to the arts. There have been more and more films included in the festival, from just 25 films in 2015 to 60 in 2017, including 13 from Lebanon.

De Freige says the Lebanese are increasingly realizing that they have a respectable film industry. Even if every person in Lebanon watched all the local films released, however, it wouldn’t be enough to make them profitable. De Freige says the industry needs to make good quality films that captivate a wider audience. Stressing on the same point, Naufal says “making a feature that doesn’t go outside of Lebanon doesn’t get you very far.” Sarraf agrees that it’s a huge challenge penetrating foreign markets and few Lebanese films make it internationally.

To get foreigners to pay to watch Lebanese films, they need to actually be screened abroad (a distribution issue) and the industry needs to have a good reputation (a promotional issue). The good news is that Lebanese films have been showing (and winning awards) at prestigious film festivals around the world for years, and more people outside of Lebanon are starting to recognize the industry. This year The Insult was honored at the Venice International Film festival, with the Best Actor award going to lead actor Kamal El Basha from Palestine. At the 2017 Cannes Film Festival, Lebanon was the chosen country in the fifth edition of the Factory program. Four Lebanese filmmakers were partnered with international filmmakers to create short films, which were screened at the Director’s Fortnight in Cannes. The aim is to establish connections among filmmakers with lots of potential in the international cinema industry to help them produce features. The four resulting short films were: White Noise by Ahmad Ghossein and Lucie La Chimia, Salamat From Germany by Rami Kodeih and Una Gunjak, Hotel Al Naim by Shirin Abu Shaqra and Manuel Maria Perrone, and El Gran Libano by Mounia Akl and Neto Villalobos.

Collaborations with other nations are a good way to get films screened in more places too, as having filmmakers, producers, cast, and crew from more than one country helps films get better distribution. France has had a co-production agreement with Lebanon since 2000. Now FLC is working on similar collaborations with Belgium, Argentina, and Brazil.

There are now festivals abroad dedicated to Lebanese films, especially in communities with a large Lebanese diaspora, such as Canada and Brazil. In November, de Freige and others from the industry flew to Brazil for the first ever Lebanese film festival there, held in both Rio de Janeiro and Sao Paolo. In addition to introducing Lebanese films to a wide audience of diaspora at the festival, FLC’s mission was to begin negotiations with ANCINE (Brazil’s cinema commission) to work on a co-production agreement, though de Freige laments this will likely take a long time.

Despite the creativity of the industry’s work, finances are vital to any industry. However, this should be seen as an opportunity. The private sector is already supporting cinema financially—for example, it was LiBank that made it possible to host a Lebanese film festival in Brazil. BIFF’s Naufal says that recently public sector funding has become more significant, but it’s their main sponsor, SGBL, that has kept her festival afloat since 1998.

When FLC was launched in 2003 one of its goals was to create a fund for filmmakers. Since then, the focus has shifted from creating a support fund that simply gives financial assistance, to an investment fund that encourages investors to partner with filmmakers. In recent years, progress has been made—in 2015 a memorandum of understanding was signed by FLC and the Investment Development Authority of Lebanon (IDAL)—but the fund is not in place yet. In 2016 Banque du Liban (BDL), Lebanon’s central bank, released Intermediate Circular 416, which subsidizes loans of up to $3 million by banks and financial institutions for the production of movies, television series, and documentaries, as well as theater plays.

“Film is an economic sector as well as a cultural one, and those responsible should try to support it as much as they can,” says de Freige, explaining that it employs a lot of people, especially young people, and keeps them in their country doing work in a field they love. Sarraf lists several parts of the system that are doing things right: universities keeping their programs updated, the Ministry of Culture increasing its annual contribution to film, FLC’s partnership with IDAL, and BDL’s new circular, which has led to more individual producers from the private sector who are venturing into investment in cinema.

It’s not just an issue of funding. Sarraf says the industry needs to “lobby with the government to create new laws that would help the industry, laws regarding the participation of local TV networks in the film industry and laws to give incentive to distributors to better distribute Lebanese films.” In an interview earlier this year, Doueiri also called for more support from the state, saying the film industry is a machine that needs everything from script writing, casting and directing, to post production, as well as laws that protect the industry and help with financing.

Ultimately, the films themselves are equally important, which is why industry experts advise filmmakers to focus on making quality films that tell good stories. Most agree that one of the challenges Lebanon still has is for filmmakers to write good scripts. FLC says that’s why they offer annual script re-writing workshops with visiting professionals. Naufal also advises the best way to make better films is for young directors to work on major feature films with other directors for a while before jumping into producing their own features. Adding that apprenticeship is true of any industry, she brings up the example of Doueiri, who worked on several films with major international directors like Quentin Tarantino before making his own movies.

Despite everything, Sarraf points out that the industry is much more structured today than it was in 2001, when LFF was founded, and says it’s the team effort thus far that has paid off. “Every player in the industry is doing their part of the job and everyone benefits from this common effort,” he says. Though the progress is slow, the results are showing, and further baby steps in the right direction, hand in hand, will hopefully get the Lebanese film industry to more silver screens worldwide, and make it a significant contributor to the national economy.