A lack of rules enables the illicit trade

Animal City only recently registered as a zoo with the Ministry of Agriculture (Photo credit: Greg Demarque)

In the shade the temperature reached 34 degrees celsius as Executive met Samir Ghattas at Animal City for an interview in early August. “I turned this place into nature,” he said, “the zoo is my baby.” Executive had visited the zoo two weekends prior to this meeting, first posing as tourists in order to photograph conditions at Animal City and later to take photographs by invitation. What was clear was that conditions of captivity were less than ideal: wildlife lacked water in the sweltering heat and cages hardly provided shade from the sun. Executive also wanted to learn whether allegations of wildlife trafficking were true and wanted to find out more about the zoo’s business model.

It is not profitable, Ghattas says of Animal City, but how much money the zoo is losing is not clear. Over the course of a 90 minute interview Ghattas declined to give many specifics on the zoo’s financial performance or its expenses. He did claim that he subsidizes the zoo with cash from his other businesses or his own pocket, though he wouldn’t say how much. He also said that average attendance per year stood at 70,000 visitors. With each visitor paying $5 entry, that would amount to a total of up to $350,000 in annual revenue.

[pullquote]Conditions of captivity were less than ideal: wildlife lacked water in the sweltering heat and cages hardly provided shade from the sun[/pullquote]

As for expenses, Animal City rents 26,000 square meters of land along the Nahr el Kalb river from the Melkite church at the rate of $3 per square meter per year, or $78,000 annually. Ghattas also says he shells out $12,000 per year to a company managing only the zoo’s Facebook page and there are media costs too like a program OTV was filming when Executive first visited incognito. No figures were given for food, veterinary care or maintenance expenses at the zoo.

The lack of data is not isolated to the zoo alone. Until August the government officially had no idea Animal City existed. Executive was not able to obtain an inventory of the zoo’s wildlife stock. Without knowing the total number of animals kept at the zoo, and with no clear picture of revenues and expenses it’s impossible to pinpoint how much is spent on food and health for those animals, or to evaluate whether that amount is appropriate. No knowledge of how much money actually goes toward animal care obscures the quality of that care. This leaves only anecdotes of conditions: lack of water and shade in the heat of summer, small cages with concrete flooring, the poor health of a chimpanzee, the death of a lion cub. Visual confirmation backs up those anecdotes, and even Ghattas admits the conditions at Animal City fall far short of international standards for captivity (see explainer on standards).

No law, no consequences

What is more troubling is his admission to Executive of the zoo’s implicit participation in wildlife trafficking. He points blame at the government for not having rules that legitimize his zoo, and says how suppliers import wildlife into Lebanon is none of his concern. That line of reasoning was partly true. A January decision issued by the Ministry of Agriculture that went into effect last month asked animal businesses (zoos, pet shops and veterinarians) to self-report on the animals in their possession. 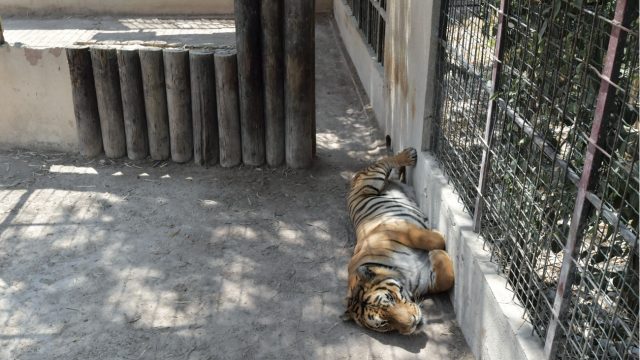 But Animal City itself is not registered as a business in Lebanon. Instead it is a tourist attraction operated by a Ghattas-owned business called Gesco Entertainment sarl. In its commercial registration, Gesco describes its business activities in part as importing, exporting, breeding and selling animals.

Ghattas says Animal City cannot import wildlife directly because Lebanon’s government did not recognize the zoo, blocking it from obtaining permits required by international conventions affecting animal welfare (see explainer on conventions). But the bigger complication could be its registration as Gesco, an entertainment company, instead of soley as a business with a zoo description, or as a nonprofit in line with best practice where wildlife are no longer bought or sold by zoos but instead ‘loaned’.

In the United States, for example, the practice of one zoo loaning an animal to another addresses both ethical and business concerns: placing a dollar figure on animals reduces their value to education and conservation purposes, increases their value to traffickers in black markets and avoids a lengthy and costly permitting process required by US law when wildlife is exchanged for money. So despite now being recognized by the government, the way Ghattas has set up his company may hinder the zoo’s ability to comply with the international rules of animal trade.

Because there are so few indicators, the best picture of wildlife imports and exports comes from Customs data, totalling less than one percent by value of all live animals entering or exiting Lebanon since 2012. That data doesn’t catch the extent of wildlife trafficking because traders skirting international conventions assumedly also bypass Lebanese Customs. In 2014 the United Nations Environment Program valued global wildlife trafficking at anywhere between $50 to $150 billion every year, describing the illegal trade as “often carried out by criminal groups operating across borders…[that] are attracted by high profits and low risks associated with weak governance and lax penalties”. 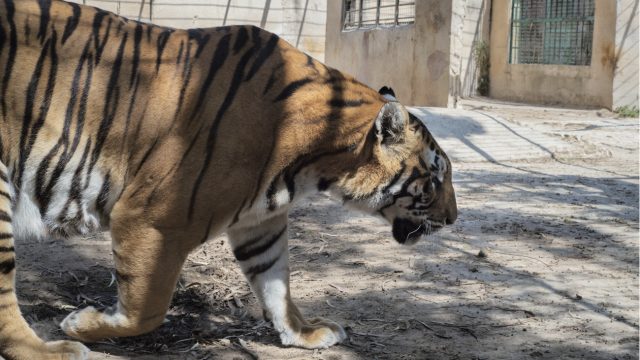 Ghattas admits to buying wildlife from traffickers but insists he does not sell his animals, except for the time he was caught this summer when news broke that a lion cub sold by Animal City to a private owner had died. In trading wildlife, Ghattas says he only deals with third-parties, but the zoo as a cash business and the way Gesco is structured under holding company Gatas Group (a holding of companies across Africa, Lebanon, Iraq and Canada) enables the potential for further involvement in the illicit trade. Whether Gesco directly imports or exports wildlife was not clear from the interview, and Ghattas did not respond to follow up questions seeking clarification.

Before, Animal City never had to play by the rules. Ghattas could do what he wanted because Lebanon has no law, was not, until recent years, a signatory to conventions, and until August had few regulations. Ghattas was comfortable operating in such a lawless climate because there were no consequences. He only needed to shell out extra cash to get the next exotic animal for his collection. Now that the zoo has registered with the Ministry of Agriculture, and with another just-issued decision to control big cat trafficking, Animal City can no longer plead ignorance of wildlife trading rules.

You say the government does not legally define what a zoo is in Lebanon, leaving Animal City to operate in a sort of gray zone. How does that affect your business?
Not being legalized means we cannot contact other zoos worldwide to buy animals they reproduce. Zoos don’t allow animals to go to other zoos that are not legally recognized. So we are stuck here: you cannot collaborate with other zoos and you are stuck because you have to buy your animals from smugglers.

Is the business model for Animal City a sustainable one, is the zoo profitable?
It is not profitable and financially it is not a good business. But it doesn’t mean that I will give up. It needs to be improved. If someone will come to adopt and sponsor this place, I am ready. The more people that come the more income.

Does the revenue from Animal City even factor into the earnings of the zoo’s holding company, Gatas Group?
In terms of revenue, it’s not a big deal when compared to the catering that we do for Chevron – we’re feeding 3,000 people per day. You cannot compare Animal City to that. I have a hotel in Zimbabwe where all the mines are, you cannot compare it to that either. I have a construction business in Faqra, one small chalet that I’m selling for $1.2 million and you cannot compare that to Animal City. Animal City is my baby and I am not looking to make money from it. It’s a baby that needs me to invest and inject money in it. It’s my baby you see, it’s something I’m attached to.

Does the zoo need help financially?
No. Let me explain what I said. At the legal level, why am I paying $10,000 for a lion from a local business that smuggles it, when I can send an email to a registered legal zoo asking them to send me two lion cubs via the international airport of Beirut and Customs to Animal City for a few hundred dollars? Why are you pushing me to deal with smugglers when you can tell me these are the rules? Comply with them and they could give you the papers to buy animals the legal way. This is my problem.

So because the government doesn’t have rules to classify zoos you have to do business with illegitimate sources?
I am buying according to an invoice signed by the supplier inside Lebanon. Now the problem of how he brought this [wildlife] in is his problem. But I don’t buy it under the table. I don’t buy it during nighttime. I buy from a petshop that has an address, a telephone number, an owner and an invoice.

When you sell offspring are you not contributing to trafficking?
This was one case, and I defy anybody who can say he went to Animal City and bought a lion. I’m not selling. For me it’s nonsense to focus on such incidents, I don’t understand why they are focusing on it. [Editor’s note: Here Ghattas is referring to the August 2015 death of a lion cub sold by Animal City to a private owner. The question was not specific to lions and activists allege the zoo has sold other wildlife].

I’ve been to this zoo and came out heart broken. The conditions are appalling. I hope the zoo closes down and the wild animals go back to wild life. How the hell do you have the audacity to place a lion in a small cage where he can barely move?? These people need to be locked up in cages to get a taste of their own medicine. If there is any petition to be signed or anything to be done to close it down or come down harder on animal abusers, I’m all in.