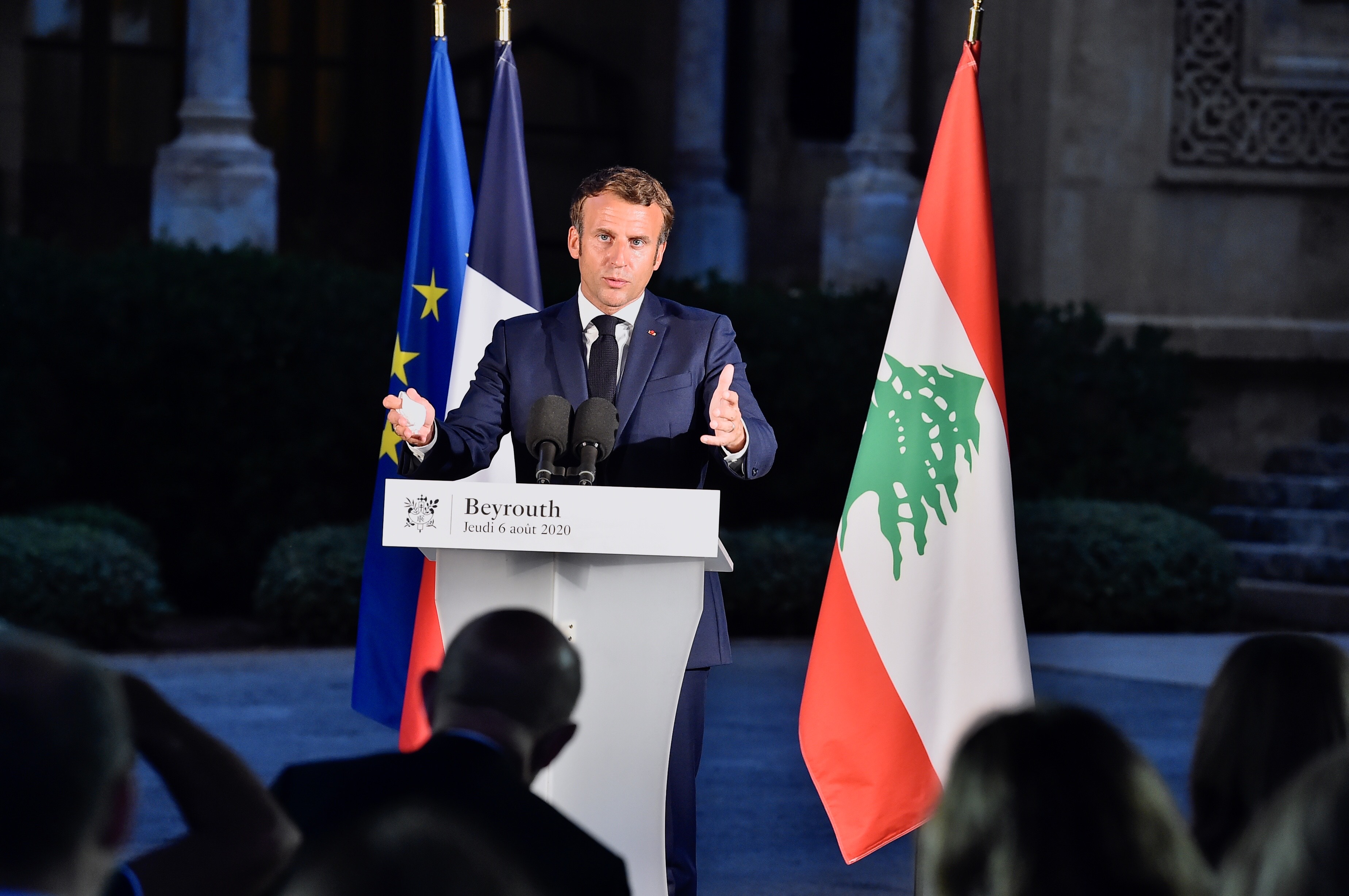 Eight months after Beirut’s deadly port explosion, the French initiative seems a lost opportunity in need of resurrection. Post-blast, French President Emmanuel Macron was welcomed in the streets of Beirut on August 6, 2020, while overseeing damages, which was followed by a second visit less than a month later, on August 31, 2020. During his visit, he promised to initiate talks with donors and to come back to Lebanon to bring forward an initiative that would help alleviate Lebanon’s woes and unlock the Conference for Economic Development and Reform through Enterprises (CEDRE) money that had been once considered as a main pillar of Lebanon’s future economic revival. The CEDRE conference was held on April 6, 2018, in Paris, and had pledged USD 11 billion of infrastructure projects (The pledges include $10.2 billion in loans and $860 million in grants), on the condition of political and financial fiscal reforms: these never materialized. As of March 15, 2021, Macron has delayed sending an envoy to Lebanon, in a sign of frustration with the current political deadlock in Lebanon.

The draft of the initiative was presented on Macron’s second visit to Lebanon on September 1, 2020 to Lebanese governing parties. In broad strokes, it called for: the need to establish an independent government of technocrats to tackle Lebanon’s economic needs; a forensic audit of the Lebanese Central Bank (BDL); a restructuring of Électricité du Liban (EDL)’s chronic deficits; reform of procurement laws; the need to implement laws guaranteeing an independent judiciary; in addition to a demand for legislative elections to be held within a year. This was followed by the nomination of ambassador Mustafa Adib to form a government on August 31, 2020. On September 26, the Prime Minister-designate resigned in the face of deadlocks in forming the government.

Macron, in a press conference held on September 27, 2020, lambasted the Lebanese political class and accused them of “collective betrayal.” Adib’s resignation as Prime Minister-designate, was followed by blockages preventing the formation of a new Government led by the new Prime Minister-designate Saad Hariri who was designated to form a government on October 22, 2020, and failed local mediations to resolve the political deadlock. For these reasons, it seems that any hope put in the former mandatory power’s proposal for Lebanon is now long gone. Nevertheless, as the government formation process is still ongoing, and with many hoping that said government of technocrats could still be formed, the question remains: could the French initiative be revived? And if so, would it help alleviate Lebanon’s woes?

The most important question in regards to the French initiative is whether it addresses Lebanon’s priority needs. Lebanon suffers from a default on its foreign-currency labeled sovereign debt, losses in the banking sector estimated at $44 billion according to a recent report from the World Bank, a depreciation of the Lebanese pound, and with ever rampant corruption. The French initiative, on the surface, does seem to address some of the main issues, such as EDL’s deficit, the losses at the BDL, and corruption, among others. Nevertheless, it is deemed insufficient according to many economic experts. According to Ziad Hayek, former secretary general of Lebanon’s High Council for Privatization and Public-Private Partnerships, the French initiative “touched on some of the most obvious things, some of which are not applicable anymore,” referencing the fact that the proposed reforms are outdated as they rely on assumptions from the CEDRE investment plan. According to him, the French initiative is too general and overlooks two main factors, the first of which is the lack of a coherent governmental economic strategy, and the second is that the plan seems to lack “a proper understanding of the play between economic, monetary and fiscal policies.”

Indeed, overall, the French initiative seems to overlook key aspects regarding the lack of effective governance in Lebanon. Lebanon’s Ease of Doing Business Index rank is no. 143, it’s competitiveness index is 56,29 (ranked 88th worldwide), and it’s Fragile State Index is 84,9/120. This opinion is seconded by that of Mounir Rached, President of the Association of Lebanese Economists. “There is too much focus on general issues, but not enough on what needs to be done,” he says. According to him, Lebanon needs an economic roadmap, and precise measures to reform governance and boost the economy (issues that were addressed by Executive Magazine in its Economic Roadmaps 1.0, 2.0, 3.0 and 4.0).

Indeed, if anything, the French initiative does seem to lack details, as it focuses on some of the “main” issues affecting Lebanon from a deficit standpoint, and the audit of the BDL (to determine the exact losses of the institution), but has little to say about how to promote economic growth or on monetary policy.

The French initiative is also not clear concerning an overall economic strategy to get Lebanon’s economy back on track, instead of relying on the need to obtain funding from the International Monetary Fund (IMF) through negotiations. Though negotiations with the IMF, which are part of the measures mentioned in the French Initiative, have stalled, little has been done to revive such talks on the part of the executive branch in Lebanon.

With regards to EDL reform as proposed by the French Initiative, according to Hayek, the plan relies on many assumptions from the CEDRE investment plan, which needs to be reviewed in light of the current economic situation. He cites for example the need, mentioned in the French initiative, to build new power plants, “Serious thought should be given to distributed generation instead of building large power plants, because it would be difficult to attract proper large investor interest at this stage.” This is because large power plants require large foreign investments, whereas distributed generation is decentralized and adopts more flexible technologies that are located close to the load they serve, with more limited production capacities.

French President Macron, having postponed his visit to Lebanon originally planned for December 22, 2020 after contracting COVID-19, meant to send an envoy to Beirut (with no concrete date proposed yet). With new Prime Minister-designate Hariri’s consultations to form a government showing little to no progress since September, little has been done on the Lebanese political side to help advance the initiative. Indeed, bitter disputes regarding the formation of a technocratic government, with political parties arguing over cabinet portfolios, has frozen efforts to form a government, one of the main points of the French initiative to help restart the negotiations with the IMF and engage the necessary reforms. “We need a government,” says Rached, “and for now there is little sign of progress”.

The French initiative without the French?

The reforms proposed in the French initiative, though deemed incomplete, appear nevertheless to be necessary. The question remains then: would it be possible to engage in these reforms without French backing?

Such reforms are mostly local and do not require direct foreign assistance, since they could be the result of local governmental initiatives. Rached and Hayek both believe that the Lebanese are capable of implementing large parts of the French initiative, without the French, and see no reason to delay. Indeed, many of the recommendations mentioned in the initiative, such as ending EDL’s deficits, an audit of the BDL and others require only a political decision.

The decision seems to be, first and foremost, political, and the lack of decision-making in Lebanon is a result of ineffective governance. Since the cabinet of Prime Minister Hassan Diab resigned in the aftermath of the August 4 Beirut explosion, Lebanon has been without an effective government for the past six months, though the Diab cabinet is still acting as caretaker government, and efforts to permit the formation of a Hariri-led government, by time of this writing, did not appear to reach any conclusion. Without decision-making, Lebanon is not able to propose an effective economic roadmap and implement reforms, as takeover governments only tackle everyday business. The formation of a government would allow launching tenders to build power plants, reforming procurement laws and engaging in a BDL audit, all of which are part of the French initiative but also of any reform package that would be approved by the IMF. Another example of immediate measures to be taken is the need to liberalize the rate of the LBP, which has not even been mentioned by the French initiative but is appearing more and more as an economic necessity to avoid a depletion of BDL reserves (due to said reserves being used for subsidies) and to allow Lebanon to minimize its trade balance deficit.

In conclusion, the “French initiative” recommendations could very well be applied by a Lebanese government, but under current political governance, appears increasingly difficult. Meanwhile, with political deadlocks, it seems reforms will have to wait. According to  Hayek, the “French” initiative could be pursued without the French, but this could not be done anytime soon due to what he sees as a lack of parliamentary initiative, “If we get 20 new members of parliament from the civil society next elections, maybe we can change the dialogue towards implementing effective reforms.”

The French initiative seems to have hit a dead end.The main hurdles in implementing needed reforms are primarily political. For example, a full audit of the BDL would require a law to be passed in parliament due to banking secrecy requirements (though it has lately been subject to debate regarding public entities’ accounts according to Caretaker Justice Minister Marie-Claude Najm). In addition, procurement reforms would need a law in parliament, as they do not follow international standards, according to Rached.

Still, the priority issue, according to Hayek, is the banking sector deposits labeled in USD. Whether this money has been spent is still the subject of ongoing debate, though most experts in banking deem it so. For Hayek, the only way to deal with this issue is to stimulate capital markets through the creation of a trust that would hold the assets of the state to eventually privatize those assets and list their shares on the Beirut Stock Exchange when market conditions improve. All of this would require laws to be passed in parliament.

The French initiative calls for elections to be held within one year from the initial proposal in August, which would require that most reforms be quickly implemented by current parties in power.

Macron has delayed sending an envoy to Lebanon as of February 18, 2021. It remains to be seen if the local political deadlocks will be removed to help form a government and initiate reforms, to fully benefit from the hand extended to Lebanon by its old mandatory power.

Overall, the economic solutions to Lebanon’s crisis do not seem to require as much foreign intervention as they do national willingness. The latter, sadly, is still subject to what observers deem to be political bickering, corruption and ineffective governance, which for the moment do not seem close to end.