The impetus for change

A GCC perspective on shareholder activism

Shareholder activism has experienced a revival and is now growing in influence globally as an effective tool to transform companies by unlocking share price value and improving their strategic vision and governance tactics.

The phenomenon of shareholder activism is not new. When it started back in the 1980s, it sparked numerous controversies due to the aggressive tactics employed by a number of activists—referred to as corporate raiders—to change a company’s capital, managerial, and operational structures.

In comparison to the early days of shareholder activism, it has now become more common to view the practice as a catalyst for positive change that aligns the interests of a company’s board, management, and shareholders. Moreover, shareholder activism forces companies to review their focus and strategies.

From its initial prevalence in the United States, shareholder activism has, in the last few decades, expanded to new frontiers in Europe and other markets. In the countries of the Gulf Cooperation Council (GCC), where corporate governance, the performance of securities markets, and the public listings of large companies have, in recent years, been matters of increasing interest, several market players hold the view that GCC countries would benefit greatly from shareholder activism.

Proponents of governance and shareholder activism across the Middle East and North Africa (MENA) region argue that this part of the world is becoming increasingly transparent from a regulatory perspective. Also, as more companies are listed publicly, these advocates see the need for the region’s economies to shift toward increased institutional ownership and improved economic health.

The region today has more fertile ground for shareholder activism than it did in the early 2000s—when several securities markets in the GCC were in the early years of operations and had nascent professional investor cultures. However, any discussion of shareholder activism in MENA should take the complexities of such a development into account. The US or European models might need to be adapted to suit this geographical territory and legal and cultural environment. In short, one would need to create a Middle Eastern way of doing shareholder activism.

In the context of securities markets, activism represents a strategy or a range of activities by one or more shareholders of a publicly traded company to drive some change within the company, with the ultimate goal of unlocking some form of shares’ value.

Depending on the changes sought, the activities and the level of engagement may differ. On one side, there is activism practiced by hedge funds seeking substantial company changes at the strategic level, within the board management structure and financial structure. This form of activism is interventionist as a fulcrum of change. Historically, these activists have been classified as “corporate raiders,” as they sought to dismantle a company they regarded as “inefficient” by taking full control of the company’s shares, often using their own capital and engaging in all sort of proxy tactics to gain control of the board.

Arguably, the first shareholder activist was US-based economist and investor Benjamin Graham, who, in 1927, pushed Northern Pipeline Company to distribute its excess cash to shareholders. The company was not willing to agree, so Graham ran a PR campaign to get himself appointed to the board of directors. At the time, such behavior was unheard of—a fund manager trying to influence the governance of a publicly-traded company.

Since the 1980s, asset managers like Carl Icahn and Nelson Peltz have built their fortunes by staging very aggressive raiding campaigns. In the 1990s, hedge fund managers such as Bill Ackman and Dan Loeb entered the game. Meanwhile, activist shareholders and hedge fund icons such as Robert Monks and John Paulson began softening some of the corporate raiders’ techniques, raising money from other investors and aiming not for full board control, but for minority board representation.

The focus of recent shareholder activism is, thus, not always the breaking up of a company, but the installation of positive changes via a new management structure, the restructuring of finances, and operational efficiencies. This new, softer side to activism can be classified as constructive activism, involving one-on-one engagements between shareholders and companies, and legalized in the new “say on pay” provision of the Dodd-Frank Wall Street Reform and Consumer Protection Act, which grants a firm’s shareholders to have a right to vote on the remuneration of executives.

In the last 10 years, shareholder activism has grown exponentially, possibly due to the broadening of activists’ tactics. Over the years, many activist funds have been established, and Hedge Fund Research estimates that in 2017 activist strategies represented 15.1 percent of assets within the event driven category; total assets were $125.6 billion. Further illustrations of sector growth are set out below: 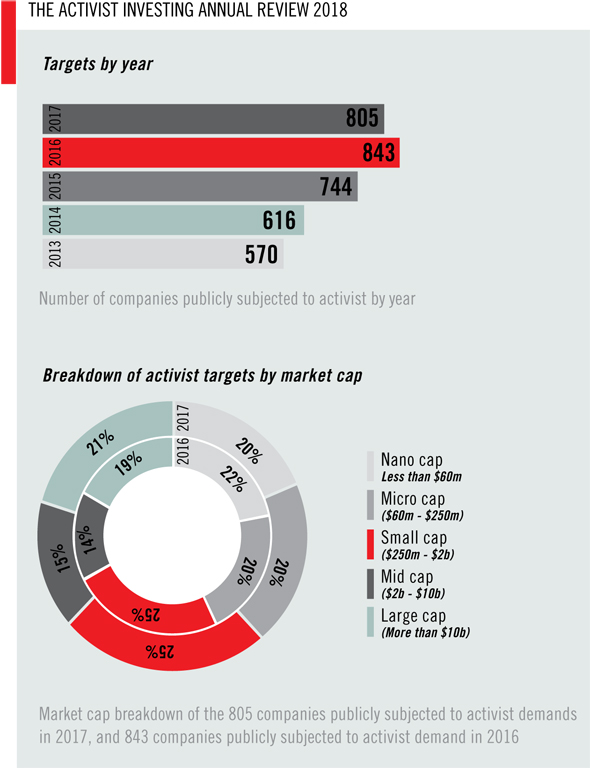 More and more hedge funds have been adopting a capital allocation strategy, which is the process of allocating financial resources to different sources in order to increase profits. A target company may attract the attention of activists if a board is perceived as being ineffective, if it has a low market value relative to its book value, or if it is looking for a new CEO. Once a target is identified, the activist tactics are considered and selected. Numerous market sources, including the 2018 review by Lazard Bank on shareholder activism, seem to suggest that the market has evolved from corporate raider campaigns to consensus-based campaigns developed via dialogue and negotiations.

Several of the most versatile strategies are:

This strategy involves dividing board management via opposition campaigns, involving the solicitation of shareholders to withhold votes (no campaigns)—proxy contests designed to destabilize the board. This aggressive tactic is not always successful, especially in the ousting of a director, as it requires majority shareholders’ support.

Dialogue-based proposals are designed to effect changes in governance and risk management processes, as well to encourage the company to act in a more accountable way from an environmental perspective.

“Say on pay” is a legal measure first introduced in European jurisdictions that mandates an advisory shareholder vote on executive remuneration as proposed by the board of directors. It encourages hedge funds to rely on moderate tactics, such as shareholder engagement. Many applications of “say on pay” by hedge funds are designed to make changes to the compensation plan for executives.

Critics of shareholder activism argue that activist investors are interested in quick returns and short-term investments as opposed to fostering a long-term vision. But those in favor of activism argue that activist campaigns improve a company’s valuation in the long term, even after an activist has cashed out on a company. In reality, activism is seldom carried out over a short period of time. It usually requires months, if not years, to implement and measure, in addition to lengthy collaboration between institutional investors and the activist investor.

Most of the listed companies in the GCC are nano (EUR <50m) and micro cap (EUR 50-300m). Before an initial public offering (IPO), a company is usually backed by a private equity fund. Management is thus challenged to generate more cash flow in order to repay the debt, and  is under pressure to deliver a robust business plan.

When the company becomes public, most private equity funds exit and realize their financial gains. During the IPO process, asset managers can buy a stake in the company, but they are passive investors and are not represented on the board—and hence cannot change the vision, business, or value of a company.

Most companies in this space start with a great product and up to a certain point the demand for the product continues to grow, but then growth stifles. It is at this point that the company needs a solid transition to build on its success, adding products or services to sustain the corporate development through merger and acquisition operations. When an organization faces major change—disruptive innovation, taking drastic adjustments to transform an enterprise—managers can destroy a lot of value. Activist investing is a natural revolution to help listed companies become more efficient.

Activism in the GCC can be developed as follows: Nano and micro cap are a niche company market and there is an opportunity for an activist to add value in a legitimate way. As GCC companies are less well researched by analysts and less likely to follow corporate governance best practices, the potential for unlocking big share price gains may be greater than with larger groups of more established companies. Also, smaller companies do not always have the resources to fend off an activist campaign.

In the GCC, it is crucial for companies to become more transparent. In most instances, companies employ an auditor to analyze their financial statements, but sometimes those charged with scrutinizing the corporate books are too close to management. This hinders objectivity and can result in failure to detect malpractice. If an activist provides more due diligence, they can discover any financial shenanigans and poor management decisions that were made to sustain the value for the shareholders. They could then challenge the board and the management to bring more transparency.

Shareholder activism has evolved significantly since the 1980s and its reputation as a destructive force is no longer applicable, given the emergence of increasingly constructive campaigns. The GCC would indeed benefit from a form of shareholder activism that is constructive and proactive with extensive management dialogue, which could help companies become more transparent and operate in a more cost efficient way. Bringing greater transparency to publicly-listed companies in the GCC would arguably encourage greater investment from Europe and the US, and this would benefit the economy as a whole.

Lebanon, lend us your ears