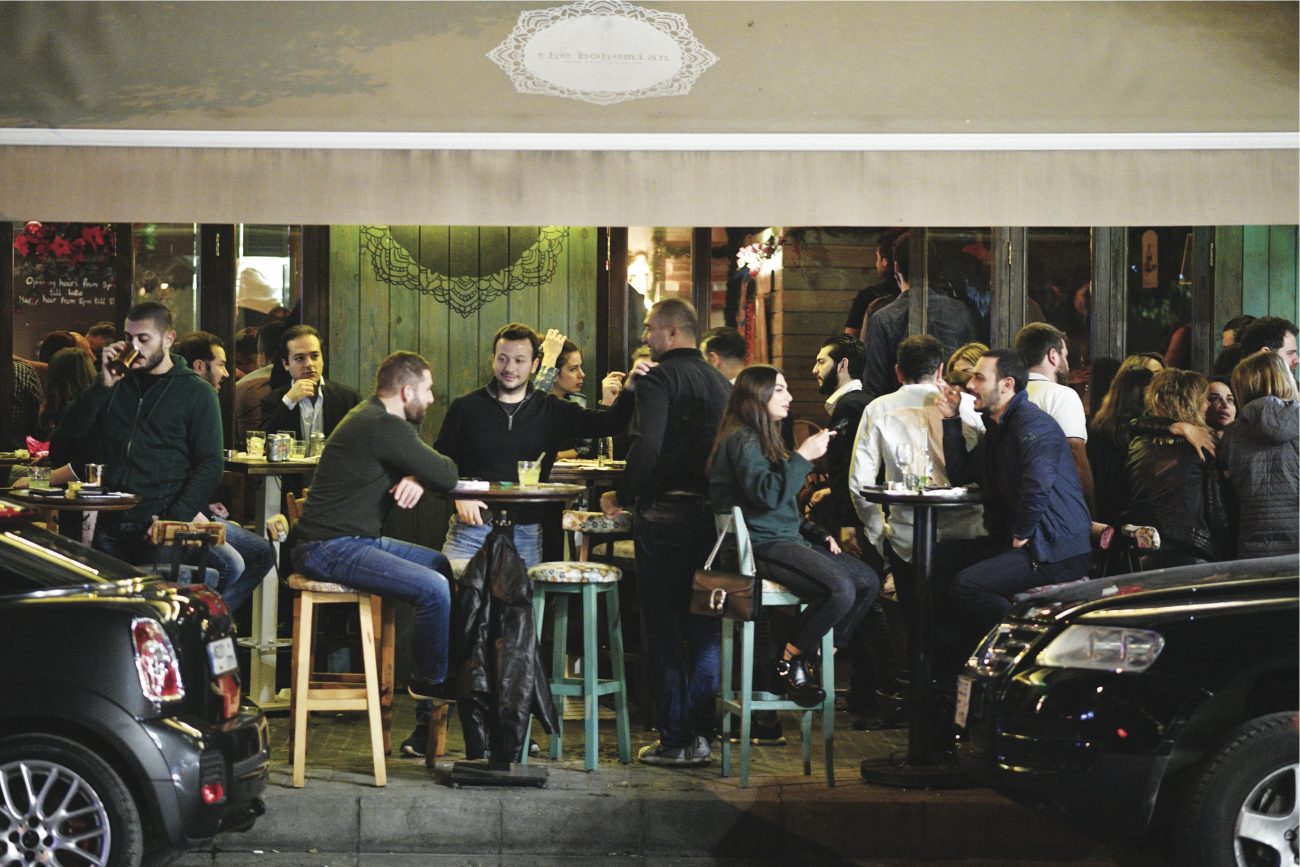 Lebanon’s food and beverage (F&B) industry is finally getting the kudos it deserves: Beirut was named Travel and Leisure Magazine’s Best International City for Food in 2017, and the country has recently been recommended in many global publications for its food, wine, and nightlife.

The country is developing into an F&B haven, as more establishments step out of the box with their culinary concepts. Meanwhile, Lebanon exports  nightlife trends to the region. Despite this, those who work in the industry still have to cope with the challenges of an increasingly competitive and unregulated market, and with consumers’ decreasing purchasing power.

The F&B operators Executive spoke to say summer 2017 was a good one, almost reminiscent of 2010—a record year for many in the industry. “We really felt a difference [compared to the last three years]: Everybody in the sector was working, hotels were fully booked. If it were only the Lebanese expats that had come back for the summer, it would’ve been enough for us. But on top of that, many tourists—especially Kuwaitis—came, too,” says Tony Haber, CEO of Addmind, a Lebanese F&B and nightlife management company, explaining that Lebanon is resilient and quick to rebound from a crisis.

In his bars, TRI Concepts CEO Toni Rizk noticed a relatively new trend. “The good thing about Lebanon this summer is that we got a lot of European tourists who are actually residing in the Gulf but came to Lebanon for a quick getaway, since they find it authentic and have read about its food and nightlife in the press,” he says. 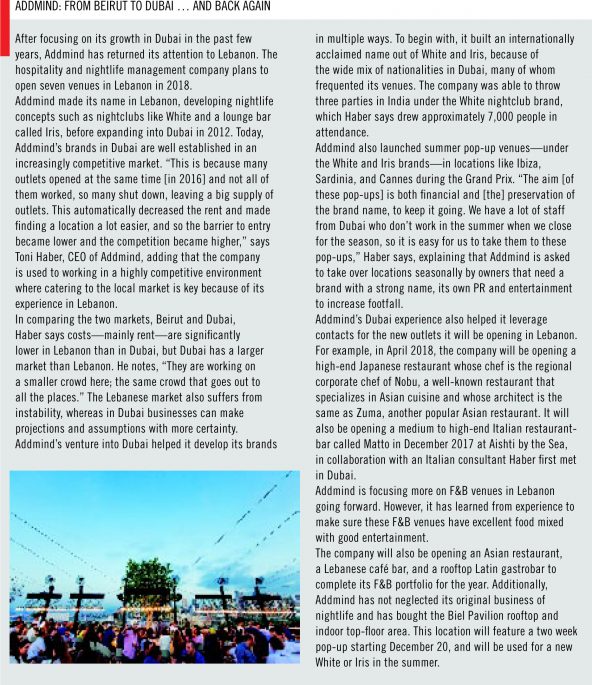 Summer is when many take a break from the city’s heat and head to the beach or mountain bars that pop up during this season. The past year saw more such venues mushroom across Lebanon, venturing into new territories or reviving familiar ones such as Qlayaat, Aley, and Jounieh.

Established locations continued to be an attraction this year, with around 10 new F&B venues setting up shop in Broummana, and some, such as Roadster, Starbucks and Zaatar w Zeit, establishing year-round venues. “We opened a seasonal Trumpet Cocktails Food and Tunes in Villa Printania, Broummana, and it was very good exposure and experience. Everybody in the summer wants a change from Beirut and escape to the beach areas or cool mountains. So, if you open a seasonal project that caters to them, you’ll have a good market,” says Rizk, explaining that the cost is relatively high for such projects because rent is calculated over three months, and because salaries are higher in the summer when demand is higher and operators have to do their calculations carefully, or they might end up losing money.

Rabih Fakhreddine, CEO of 7 Management, says that while seasonal outlets come and go, the real business is in Beirut. “The year was good for us, despite many places opening this year. The expansion is happening geographically—with venues opening in different areas across Lebanon—but Beirut will always remain the hub of nightlife, since the main purchasing power is here; it’s the showcase for the country,” he says.

New F&B venue openings were not restricted to the summer, and it seemed as though there was a new concept opening every week this year, with almost the same number shutting down. “The rule of F&B in a mature market is that you have many venues that enter the market, but almost an equal number that exit it. This is the case in London and New York, for example. But in Lebanon, it has gone out of control,” says Haber, noting that Beirut’s mature F&B market means that those who want to open new establishments need to know what they are doing in the face of high-quality competition.

While Lebanon is a free market, Rizk says some regulation would benefit the whole sector. “There are so many new outlets that it’s not a healthy market anymore; there needs to be some control in this. It’s the role of the municipality and the Ministry of Tourism to regulate this [market], but there is no coordination or common strategy among them: They wait until residents complain of noise or traffic before they take action. They can control this through increasing the price of [the operating] license, since it is very cheap here,” says Rizk, explaining that F&B in markets abroad is generally regulated through costly licensing.

When the going gets tough

This increased competition, coupled with consumers’ dwindling purchasing power, is making it challenging to operate an F&B outlet in Lebanon. “The market is tighter, the average check is dropping, spending power is getting lower year after year, and the economy is not helping at all. It’s not easy for us operators because we have to maintain a certain level of quality and consistency. All this comes at the expense of our profit margins,” says Fakhreddine.

Rizk also speaks of the projected impact of recent tax increases on the F&B sector. “With the tax increases, expenses will be higher at a time when the purchasing power is even lower: Average salaries are low in Lebanon, and so people will barely have any money to spend. Over the long run, if the situation continues like this, it will affect our sector. It’s too soon for the effects to show now, but they will gradually,” he says.

This situation has led to a market where both differentiation and value are key. Snack and fast food F&B concepts are growing in popularity. At the same time, almost all F&B concepts from the casual diner to the medium-end restaurant to the neighborhood bar are promoting offers and formulas aimed at attracting customers through reduced pricing and value meals. 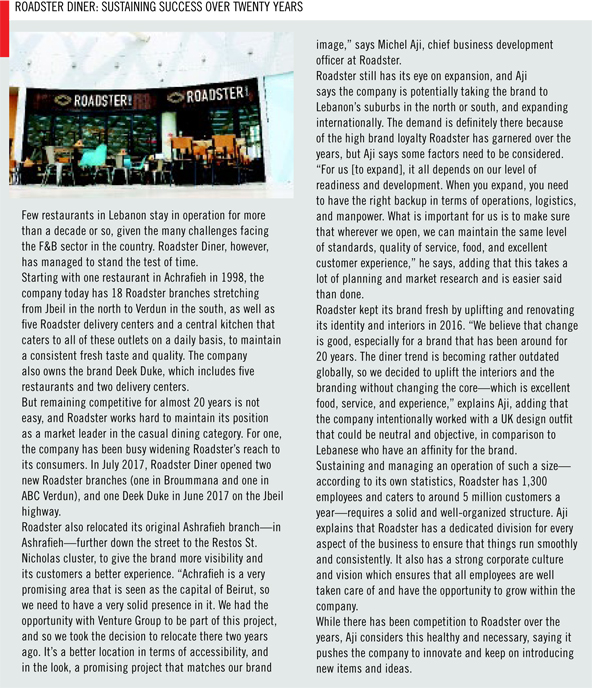 When it comes to nightlife, differentiation is often in the entertainment. Theme nights or themed concepts from latin to jazz to oriental have become commonplace. The most enduring trend is the oriental or Lebanese one.

Fakhreddine claims his groups are pioneers when it comes to oriental-themed concepts and were among the first to introduce Arabic songs in their playlists back in 2012 with their Hamra venue February 30. According to him, they were also the first to introduce shisha in nightclubs in their Mar Mikhael summer venue Sayf Feb 30. “Shisha is becoming trendy, and not just in Lebanon—clubs in London and Paris are introducing shisha to their menu. The trend is everywhere, so we capitalized on this while trying to provide a unique experience. It’s the young people who are driving the trend of shisha, which is interesting because it’s usually the older crowds who like it,” he explains, adding that they sell 300 shishas per week in Sayf Feb 30, which is good for a club.

The oriental or Lebanese concept is also reflected in the many Lebanese cuisine cafes that entered the market this year—or expanded into prime locations, such as Falamanki in Raouche. Fakhreddine says his Lebanese café concept, Kahwet Beirut, located in Downtown, has a capacity of 400 and has been full almost every night since its launch in October 2016—allowing him to return his $500,000 investment in less than a year.

There is a newfound appreciation among Lebanese consumers for good quality food. “More and more restaurants are now focusing on the food rather than just trying to impress people through the way the restaurant looks. This is because people are developing more of a palate and an understanding of where the food comes from, so there’s more focus on farm-to-table or seasonal food,” says Karl Naim, cofounder and CEO of ChefXChange, an online platform for people to book culinary experiences that also offers menu consultations for restaurants. Naim also founded Lobster Society, a “passion-project” restaurant with a focus on lobster-based dishes.

Riad Abou Lteif, a chef and co-owner of Ferdinand, a neighborhood bar in Hamra, and Meats & Bread Hardcore BBQ, a restaurant in Gemmayzeh, says the Lebanese are quick to adopt trends and have taken an interest in niche fresh food. “When it comes to niche food, people will go to places that cater to their tastes. Those that usually like sushi will go to the new poke places, for example. As long as the product tastes good, [a venue] will survive and have its clientele among the Lebanese,” Abou Lteif says, adding that he believes ramen noodles, soul food, and stews with a twist will be the upcoming food trends in Lebanon.

Food has even become an important aspect of business in bars, which are not typically known for their mouthwatering cuisine. “There is more of a general interest in food in Lebanon, even in nightlife, and one of our bars, Trumpet, has had an increase in footfall because it’s becoming known for the good food we serve in it,” says TRI Concept’s Rizk.

Operators who used to solely be into nightlife developments are now branching into F&B. Fakhreddine says his positive experience with Kahwet Beirut has encouraged him to venture more into F&B in 2018 through the planned opening of a Japanese restaurant, and a snack concept called El Kbeer.

Meanwhile, Haber says Addmind will also be venturing into F&B, with a twist (see box above). “Nightlife has always been much more developed in Lebanon than other countries. But I think today, the market is changing in that sense, and that’s why we are changing with it and going more into F&B concepts with an element of fun,” he says.

Many of Lebanon’s F&B operators have their eye on markets beyond Lebanon. Naim says that once Lobster Society completes its first year of operation, he will look into taking it to the Gulf.

Some of Fakhreddine’s venues will also be going regional next year. “We tested the market, gathered a database, and made a very solid name and equity for our brand through the Antika nights we used to host in hotel ballrooms in Dubai.  Now is the time to capitalize on that. Although Dubai is in recession, 7 Management’s strategy is to target the mid-sector, and we are investing in a calculated and smart way,” says Fakhreddine, who plans to launch Seven Sisters rooftop in Dubai by the end of January 2018 and Antika Bar in August 2018.

Whether it is through food or nightlife entertainment, Lebanon’s F&B operators continue to find ways to keep their consumers happy despite the obstacles currently in their path—and those that will surely arise in the future. That is the Lebanese way, after all. 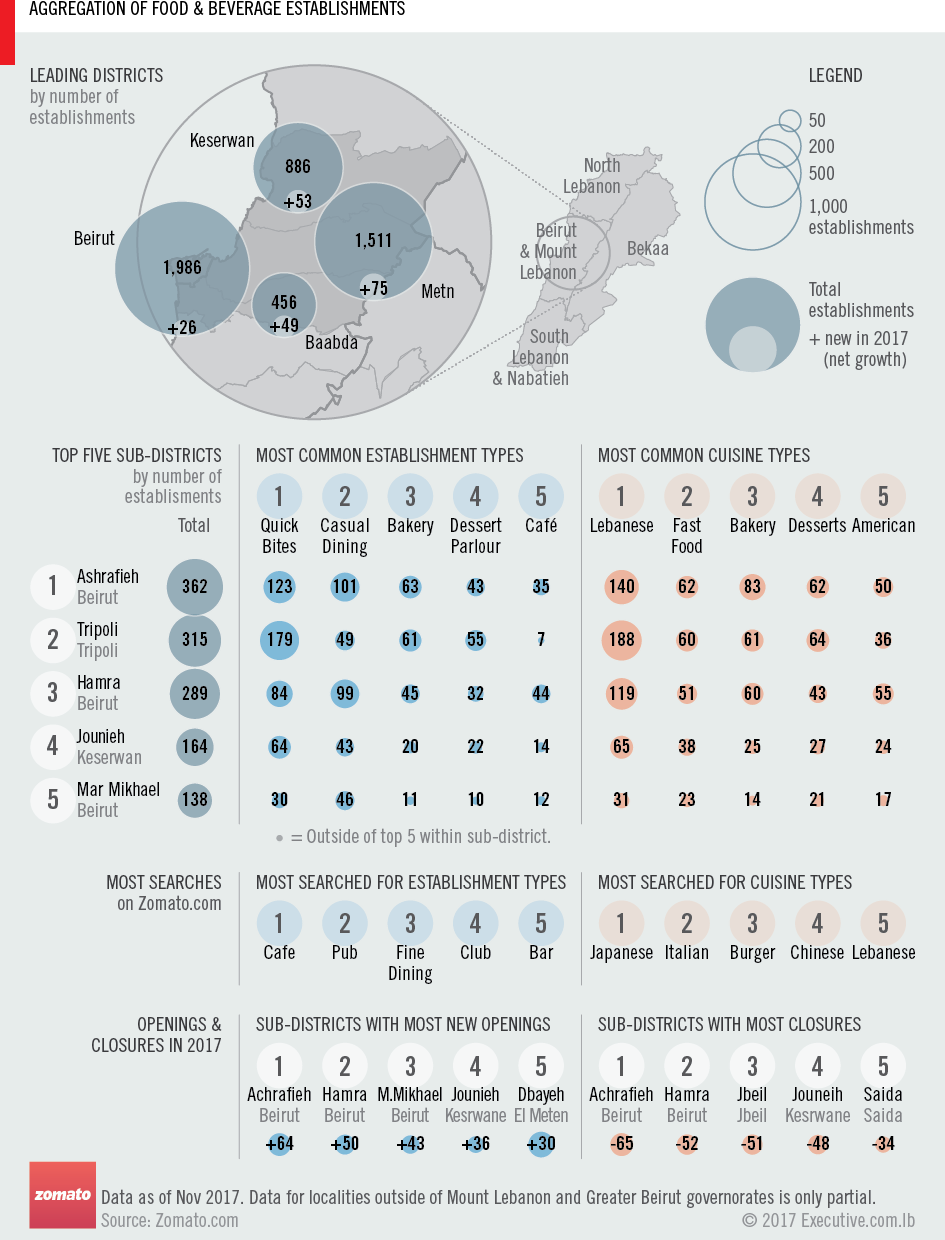