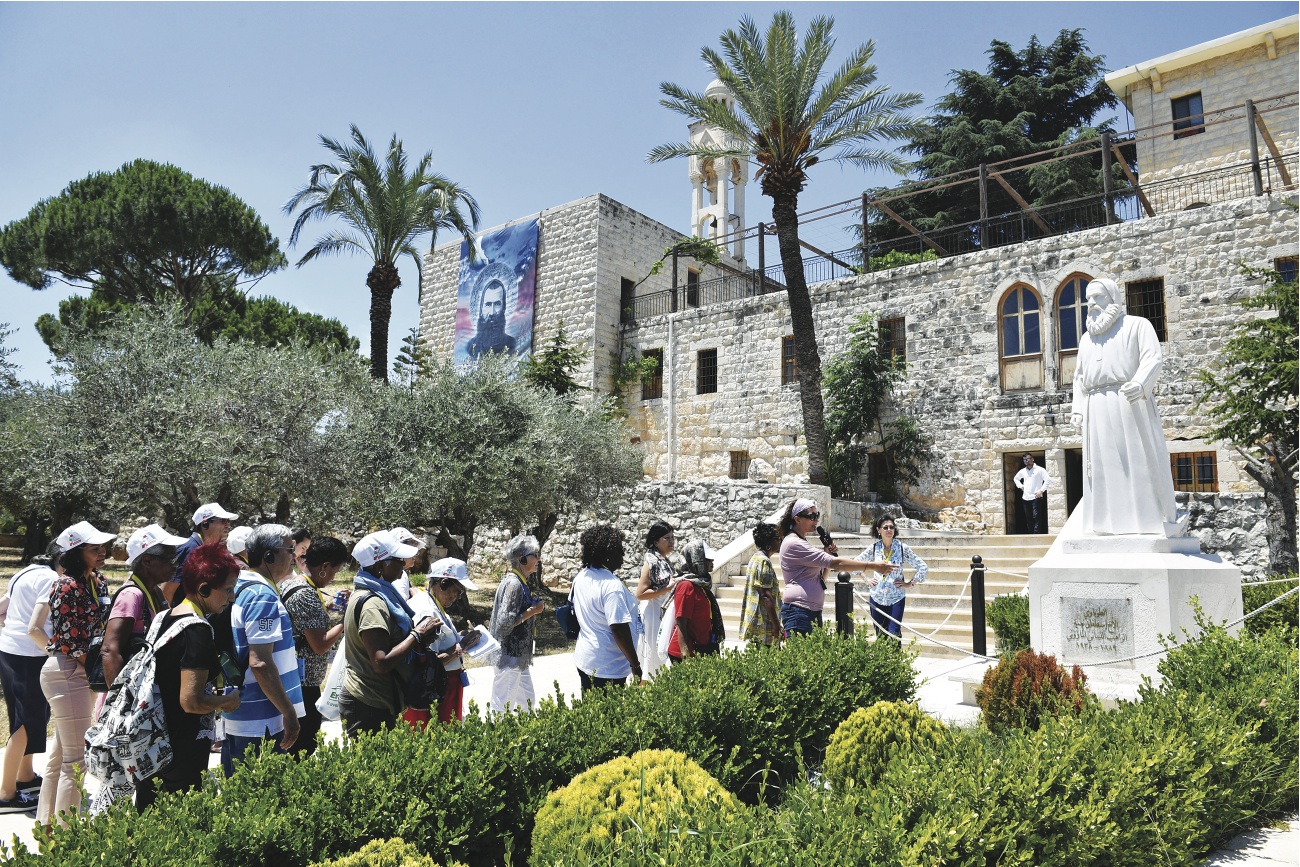 Mosques, maqams, cathedrals, monasteries, zawiyas, madrassas, a synagogue … the list of 83 historical religious sites selected for an imposing new coffee table book, published as part of the government’s “cultural religious tourism” project, is as varied as Lebanon’s religious landscape. “The book’s title, ‘Lebanon: Celebrating Our Diversity,’ is a message in itself,” says Roula Ajouz, project coordinator of the Cultural Religious Tourism (CRT) unit created by the Prime Minister, which includes representatives from the Ministry of Tourism (MoT) and other ministries. “Enough with the expression ‘inter-religious dialogue.’ It sounds like we’re living together because we have to,” adds Ajouz, who is also the general manager of Cedar Wings, Middle East Airlines’ inflight magazine.

The book was published in English and Arabic, and distributed during the official launch of the religious tourism program at the Grand Serail on May 16. Six regional maps of Lebanon, which pinpoint 250 religious sites of interest, were printed for distribution across the country. A website was launched (www.sacredlebanon.com), and a six-minute documentary produced. All of this work was funded by the Italian Agency for Development Cooperation using $328,000 of a $462,000 grant. “It’s an initiative that can also generate important revenue for local communities and for the state. By developing this particular sector, Lebanon will improve its infrastructure network and create new job opportunities for hostels, museums, craftsmanship, artisans, small shops, and other tourist related activities,” Massimo Marotti, the Italian ambassador, wrote in an email to Executive.

There has been no study yet on how many jobs the CRT project will create, but its second phase is already scheduled. “In phase two, which will be completed by the end of October, the experts will focus on two pilot sites: Qana, in south Lebanon, and a mosque in Tripoli. For this phase, Italy will contribute $69,186,” Ambassador Marotti said. According to him, “It’s understood that an approximate budget of $1.3 million will be needed over a period of two years to promote [an] additional 500 religious sites. Additional investments should come from private and public institutions.”

The total amount of such investments remains unclear. Executive was able to consult partial estimates provided by Qabas, a Shiite association that promotes religious tourism. Qabas compiled a list of 24 sites that needed rehabilitation or additional infrastructure, with the total bill amounting to $7.2 million. The only other study that Executive was able to locate was a rural tourism strategy prepared by the United States Agency for International Development (USAID) for the village of Maghdouché near Saida, which houses the popular Christian sanctuary Our Lady of Mantara (Our Lady of Awaiting). The study was compiled after the World Tourism Organization officially declared the site an international religious tourism destination in May 2016. Currently, “Maghdouché lacks the basic tourism services and facilities, especially in terms of accommodation, lodging, and F&B services,” USAID wrote in its report. Among other expenditures, USAID estimates that the renovation and embellishment of the town would cost between $250,000 and $750,000, the creation of a museum would amount to $100,000, and the opening of new restaurants would range between $50,000 and $250,000. One can only speculate how much money would be  needed to rehabilitate the thousands of religious sites scattered throughout Lebanon.

Though it is too early to evaluate the total economic needs and impact of the program, Walid Hussein, a consultant on the CRT project, has compiled the average number of visits to the 39 most visited religious sites in Lebanon. They amount to 5 million, with the top destination being the Shrine of Our Lady of Lebanon in Keserwan’s Harissa, at 2 million visits per year, followed by the sanctuary of Jbeil’s Saint Charbel, which attracts 400,000 visitors per year. The number of  unique visitors was estimated at 4.5 million per year for these same 39 sites.

Out of the 39 sites, 25 are Christian — mainly Maronite sites including St. Rafqa and St. Hardini — and 14 are Islamic (Sunni, Shiite and Druze). According to Pierre Achkar, head of the Syndicate of Hotel Owners in Lebanon, approximately 20,000 foreign tourists visit Lebanon every year for religious purposes. When compared with Hussein’s figures, one can only conclude that the overwhelming majority of visitors to religious sites are Lebanese residents.

The CRT unit believes that increasing the visibility of religious sites will encourage locals to go visit places that are not affiliated with their own religion. “It helps Muslims and Christians understand each other better,” says Ghassan Lakkiss, a mufti from Jbeil who helped the CRT research the history of the city’s mosques. Should this strategy succeed, its economic implications would also be important, argues Hussein. “More than 153,000 Lebanese traveled abroad to visit religious sites last year, according to statistics that I gathered from the Higher Islamic Shiite Council, the Hajj affairs committee, and the (Christian) tour operators Lebanon Roots and Emmanuel Travel. They spent over $300 million in 2016,” says Hussein. According to him, these figures include all Muslim travelers who visited Saudi Arabia, Iran, Iraq, and Europe, but not all Christians travelers, which is why he believes that the Lebanese people probably spent even more than this sum.

The reason why a lot of data on religious tourism is still missing is that its collation has never been attempted before. Promoting religious tourism, both domestically and abroad and, is normally in the hands of religious associations or tour operators. As a result, sites that are a little off the grid can be difficult to find for inexperienced visitors, as signage is sparse and often in Arabic, and informational brochures are rarely available. Even relatively important sites, such as the imposing Shiite maqam of Sayyida Khawla in Baalbek, which attracts 180,000 visits per year according to statistics gathered by Hussein, does not have brochures onsite in languages other than Arabic. The daunting fortifications and armed guards that surround it also do not help create a tourist-friendly atmosphere.

“It’s a real problem,” said Father Marwan Saidy, from the monastery of Paulist fathers in Jounieh. He accompanies tourists several times a year to religious sites, both in Lebanon and abroad. “In Lebanon, you need a local to be with you. Foreigners find it difficult to drive if they rent a car. Agencies only organize seasonal tours, not year-round visits,” adding that it is harder to find tours in the winter.

Lebanon as part of the

In addition to attracting tourists and developing local infrastructure, the CRT project is a political statement, argues Ajouz. “For example, we all know that the site of Qana is controversial,” she points out. The village claims to be one where Jesus performed his first miracle of turning water into wine, though it is widely accepted by scholars that the location referred to in Bible is a little further south, in Occupied Palestine. The answer to this question matters little to Ajouz. “Jesus and his apostles walked this land. So how come we are not ready to fight for this on the marketing side?” she asks, pointing to a 1942 map of the Holy Land that she has hung in her office. It includes certain areas of Lebanon, Palestine/Israel, Jordan, and Syria. Local experts like to stress that there are over 96 references to Lebanon in the Bible. “Despite these biblical references, and the many stories of pilgrims and orientalists, the designation of ‘Holy Land’ has been almost exclusively reserved for Palestine/Israel,” wrote one of the CRT unit’s consultants, Nour Farra, in a 2015 article titled, “Case Study 8: Pilgrimages toward South Lebanon: Holy places relocating Lebanon as part of the Holy Land,” published in the book Religious Tourism and Pilgrimage Management, An International Perspective.

Presenting Lebanon, in particular the south, as part of the Holy Land is important for local communities that want to benefit from religious tourism. Qabas printed 25,000 brochures in English, Farsi, and Arabic on the maqam — a site closely associated with the life of a saint in Islam — of Chamoun al-Safa, or Saint Peter for Christians. “Chamoun al-Safa is important for the Shiites because Prophet Muhammad said to Ali, ‘You represent to me what Saint Peter represented to Jesus,’” explains Ali Zreik, program manager at Qabas. “The wife of the 11th Imam Hasan al-Askari was also directly related to Saint Peter.” Other shrines, such as the sanctuary of Our Lady of Mantara in Maghdouché and the maqam of Nabi Omran, said to be the father of the Virgin Mary, have the potential to attract higher numbers of both Muslim and Christian tourists.

The Virgin Mary is a favorite for inter-religious tourism, as she plays an important role in the Quran in addition to being a central figure in Christianity. “She is quoted 36 times in the Quran. No other woman is mentioned by her name,” says Muhammad Nokari, consultant for the CRT unit and ex-director of Dar al Fatwa. In Lebanon, Muslims and Christians celebrate the announcement by the angel Gabriel to the Virgin Mary that she would become the mother of Jesus on March 25. As a result, maqams such as Chamoun al-Safa and Nabi Omran “are the subject of a campaign by the local Shiite communities who preach for their integration into the biblical trails, and hope for their official development. So far, the unstable security situation in the region has impeded the resurgence of tourism, and as a result these maqams are barely promoted at all,” Farra wrote in 2015.

The situation has changed little since the publication of Farra’s article. The main obstacle to developing religious tourism remains the ongoing war in neighboring Syria and the closure of its border with Jordan. The number of tourists has plummeted as a result, and Lebanon has disappeared from regional package tours. “Figures from the Ministry of Tourism show that in 2010, there were 2.2 million tourists, and in 2015, only 1.5 million,” remarks Hussein. The numbers of tourists who come specifically to visit religious sites cannot be analyzed, as official figures don’t exist, but it seems logical that they would have also decreased. “Qana, for example, received 50,000 visitors per year before 2010. Now, they probably have less than 1,000,” Hussein says. According to tour guide François Hobeika, “Some pilgrims still come to Lebanon, but not many. So far this year, I’ve only worked with two groups.” .

Italian Ambassador Marotti, argues that in the meantime, “Lebanon can develop its own itineraries … In the future, Lebanese itineraries could be integrated in regional tours.” The Secretary General of the Federation of Touristic Unions, Jean Beyrouthi, adds that he has been working with the Jordanian Ministry of Tourism to bring down the price of flights between Lebanon and Jordan. The aim is to encourage tourists visiting Jordan to also come to Lebanon. “Currently flights costs between $250 and $400, depending on the season. We would like them to be under $200,” he says. Should the plan succeed, it could be implemented by October.

All the professionals Executive spoke with agree that Lebanon has the potential to develop its religious tourism, and that doing so is important. However, a lack of investment and security problems have historically confined religious tourism to a small number of visitors, mostly pilgrims. With this new project, the government hopes to expand its appeal to tourists interested in Lebanon’s cultural history in a broader sense, and to encourage Lebanese to discover sites of religions other than their own. The government has already reached out to local stakeholders to start centralizing data in order to efficiently promote Lebanon’s varied religious history. However, further developing religious tourism will depend, in great part, on foreign donors’ and private investors’ willingness to contribute to a volatile region.