It’s been a mixed year for Lebanon’s retailers and luxury retailers. On the one hand, shoppers were once again bombarded with text messages urging them to hurry up and benefit from the latest discounts and offers, and passing by “70 percent off sale” signs on store windows was an all too common occurrence. Both of these are sure signs of a weak market in which consumers are not spending much of their disposable income and retailers are becoming increasingly desperate to sell their products at any price.

On the other hand, 2016 also witnessed several major store openings, including Hugo Boss’ flagship store on downtown Beirut’s Allenby Street and A. Lange & Söhne, a luxury watch store – both of which brought some much-needed dynamism to the sector.

Overall, retailers feel that while 2016 may have been a continuation of the past five years – marked by a decrease in tourist arrivals as well as dwindling local purchasing power – 2017 might just be the year that will see the economy improve, bringing a much-needed boost to their stores’ performance. The infrastructure is in place to welcome them, all that is needed are the willing shoppers.

Where are the tourists?

Similar to other sectors of the Lebanese economy, including the hospitality sector, stakeholders in the retail sector felt the sting of declining tourism figures as a result of the instability associated with the war in Syria.

The biggest spenders among tourists typically were GCC nationals, especially those from Saudi Arabia, many of whom have been avoiding Lebanon following travel advisories – and sometimes bans – by their countries’ governments. According to figures by Global Blue – which gives percentages of tourists who reclaimed their value added taxes by nationality – the first half of 2016 showed an increase in expenditure by Saudi nationals compared to 2015. Nevertheless, this is still a significant drop in spending figures from their height in 2010 (see data, below).

The first area to be affected by the drop in GCC arrivals was downtown Beirut, owing to its nature as a tourist attraction and the concentration of luxury and premium brand stores. “The first area which gets hit is Downtown because 25 percent of the turnover there is from tourism. This is in contrast to, for example, ABC Dbayeh and ABC Ashrafieh, where the turnover from tourists is only two and ten percent, respectively,” said Izzat Traboulsi, CEO of T2 trading, the retailer for Hugo Boss in Lebanon and Egypt.

Traboulsi explains that although it is true that very few tourists from the GCC came to Lebanon in 2016,  in his experience visitors from Egypt, Tunisia and Iraq somewhat compensated for the lack of visitors from the Gulf. However, figures from Global Blue reveal that percentage expenditure from Iraqis and Egyptians remains rather low, particularly when taking in consideration the high number of their arrivals into Lebanon (see data below).

Retailers who were not reliant on tourists but rather on the local market managed to perform better than most in 2016. “Hamra Shopping and Trading Company (HSTCo) has not built a retail concept exclusively designed for tourists. Our retail concepts offer international retail and customer service standards that local customers can enjoy as well as tourists. This has helped us to better cope with the declining number of tourists,” says Jamil Rayess, general manager of HSTCo, which operates Grand Stores (GS) and several other mid-range brand stores.

Still, even within the local market, retailers have noticed a decline in the spending power of the local population. Here again, it was the luxury and premium brands that were the most affected as the Lebanese who used to be able to afford high-end products either held back from purchasing to wait for better times or opted for medium-range brands instead.

That does not mean that medium or even low-end brands were exempt from this downturn, as Lebanon witnessed a general slowdown across the entire retail sector. “HSTCo’s brand portfolio and retail concepts are diverse, giving us an edge [in our ability] to cater to a wide spectrum of income brackets. Our study of the current retail market has shown that dwindling local purchasing power has affected businesses of all income brackets,” says Rayess.

While malls continued to experience more footfall than standalone shops, this did not necessarily translate into more sales for the retailers there. “Although there is more traffic in malls and department stores, we have such a great store in Downtown – in terms of location, layout, product and team – that the conversion rate is very high. And although we still have fewer people that go to our flagship in Downtown, those who do have a much higher average ticket, almost triple, than that of our stores in malls,” says Traboulsi, explaining that this could be because those who shop in Downtown tend to have a high income while malls have stores that target a variety of income levels.

Faced with such a situation, most retailers Executive spoke to were happy to have survived 2016 without any further losses, although they noted that the upcoming holiday season could tip the scales in their favor. “I consider our biggest achievement to be the maintaining of our sales and turnover figures close to previous years. Although our margins decreased, we were able to achieve fairly good results in 2016,” says Mher Atamian, managing director of luxury watch retailer Atamian.

As such, Lebanese retailers had to once again get creative in identifying strategies or approaches which would entice the reluctant local market and the dwindling number of tourists to buy more. Providing customers with a smooth and exclusive shopping experience gained added significance in Lebanon’s competitive retail sector.

Traboulsi mentioned customer service management as a main aspect which attracted clients to Boss’ flagship store. This was echoed by AS Chronora, exclusive retailers of Rolex and Tudor in Lebanon, who also focused on enhancing their customer experience and engagement.

“Here at Rolex Lebanon, we believe that our boutiques are not only showrooms displaying an array of the latest Rolex and Tudor pieces, but also a place where relationships are built between our clients and the Chronora team that aim to last for generations to come. Engaging this community’s interest has been our objective for the past year, during which two global Rolex exhibitions were introduced,” says Zeina Annan, customer experience manager at A&S Chronora, explaining that the experience does not stop there and that Chronora intends to update its website and social media platforms to allow their customers to “express themselves and their dreams while partaking in a perfect Rolex lifestyle experience.”

Others concentrated their efforts on e-commerce. “The industry is changing, and for us to remain leaders we need to stay ahead of these changes and adapt our business model accordingly. With that in mind, and noting that the conversation is happening online where everybody is on the move, we realized that is where we needed to be,” says Rayess, speaking of the website and mobile shopping application launched by GS in October 2016.

Staff training and development also played a role in ensuring that shoppers get the best experience. “Our expert sales advisors attend the renowned yearly watch fair in Basel, thus helping maintain their place among the leading experts in the industry. Even more profound is the knowledge of our master watchmakers who continuously attend a training course at the Rolex headquarters in Geneva at least once a year. Our after sales workshop located at our Downtown Rolex boutique is at our customer’s disposal for any repairs and maintenance,” explains Annan.

Some retailers took advantage of the slow years the country is passing through to grow their business in the expectation of better times ahead.

In June 2016, Hugo Boss opened its 350 sqm flagship store, the biggest men’s wear luxury store in Lebanon, on Allenby Street. Right from the start, Traboulsi wanted the flagship store to have the look and feel of its European counterparts, and worked aggressively to meet this goal. He believes he succeeded: “We opened the store and emerged with this dynamic look and feel when the whole economy was tired. So the customers who came in were feeling this dynamic energy and this was reflected in their buying and in a higher turnover for us. We got this feedback from the end consumers themselves,” enthuses Traboulsi.

The enthusiasm Traboulsi has displayed for the opening of Boss’ flagship store carries through to 2017 where he believes that the election of President Michel Aoun – and the eventual formation of a government – will lead to a return of tourists and Lebanese expats and translate into more sales for retailers, especially in the luxury items department.

“2017 will witness the comeback of Lebanese expats with a high income who naturally feel more at home spending their money here rather than elsewhere. This will positively impact the luxury market more than the others since it was the most affected in the crisis,” says Traboulsi.

While some, like Rayess, share Traboulsi’s expectations for 2017, others are adopting a more cautious approach. “The worldwide retail sector has been suffering for two years now. I think 2017 will be more or less similar to 2016. We believe we are still a couple of years away from seeing positive growth,” says Atamian.

Still, there are reasons for excitement in 2017, most notably with the opening of ABC Verdun – a joint development between ABC and Verdun 1544 Holding, one of the largest companies of Bahaa Rafic Hariri Group in Lebanon – in the summer of 2017. Stretching over 180,000 sqm of built up space, ABC Verdun consists of ten floors (five of which will be dedicated to underground parking) with over 200 shops and a cineplex.

It is hoped that ABC Verdun will revitalize Verdun and Ras Beirut area. “Perceived as the symbol of business opportunity in Lebanon, this new mall underlines ABC’s commitment to the project and its faith in Lebanon and its economy. It is anticipated to generate more than 2,000 job opportunities as a thriving social hub with both tourists and residents flooding in all year long,” says Tani Ezzedine, head of real estate at ABC. Only time will tell whether 2017 will indeed be bright for the retail sector or whether it will bring more of the same. 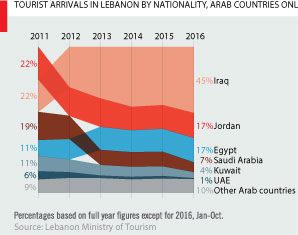 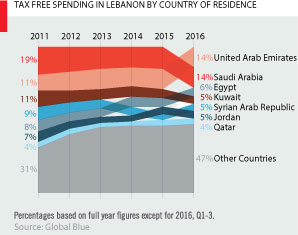