Home Insurance 2016 How secured is the Lebanese insurance sector?

How secured is the Lebanese insurance sector?

Reviewing the providers from a financial perspective

The insurance penetration rate in Lebanon for 2014 was $557 premium per capita or 3.3 percent of GDP and very low for personal lines. Hence, there is much room for growth. However, if the insurance sector continues to grow without enforcing the appropriate solvency adequacy and corporate governance reform, the possibilities of default would certainly increase.

Vulnerabilities of insurers to default are not automatically tied to the size of the company but such risks do increase when insurers lack transparency in their financial disclosures and operate below the size thresholds that commonly define viable providers. The World Bank pointed this out in December 2013 in a technical note on the Lebanese insurance sector. “Small insurers, family owned and operated, might well be more like family brokerage firms in other jurisdictions, with limited risk retention and a focus on simplest low risk products,” said the World Bank’s market and risk-based review, which overall highlighted potentials in the sector and noted the good quality of supervision.

Since the publication of the above mentioned World Bank’s technical note, the Lebanese insurance sector has not seen major changes to its structure – with 50 active companies, there are still more providers than the underlying economy appears to justify, especially when noting that economic growth in the past few years was impeded by external and internal factors. However, the Insurance Control Commission (ICC) as supervisory authority has since that time enabled analysts and market participants to gain a much improved view of sector companies by releasing the revenue accounts in addition to the balance sheet information on a company level in the Annual Sector Reports for 2012, 2013 and 2014.

On the basis of its own methodology and analysis of Arab insurance companies in the annual Digest Arab Insurance Rating (DAIR) and in the ICC annual reports, the company i.e. Muhanna rating services is now able to shed light on the Lebanese Insurance market in comparison to the insurance sector in the Arab World that is covered in DAIR. We present these findings that are based on the companies’ 2014 audited annual accounts, noting that DAIR has obtained most of the 2015 figures but we have limited the period of comparison to the years 2012-2014 in order to coincide with ICC’s most recent annual report.

This brief, which was prepared for Executive as an exclusive contribution, covers the 50 Lebanese insurance companies. It is important to note that 11 companies out of the 50 are referred to as “transparent companies” for the purpose of this article (see figure 1), since they voluntarily made their annual audited accounts public well before the ICC started fully disclosing company results with the publication of its annual report in 2013.

In analyzing all the companies in the Lebanese insurance sector, we defined three categories in which companies are clustered for the purpose of this article: transparent, unrated but secure, and unrated and uncertain (see figure 2 for the number of companies in each category).

The satisfactory proportion of insurance business by secured companies notwithstanding, the large number of unsecured companies, 31, (see figure 3) – meaning providers which a full rating would place below investment range – brings attention to the importance of introducing transparency among the Lebanese insurance companies. Based on the ICC reports, the i.e. Muhanna rating services has rated the 39 companies which do not voluntarily publish their accounts. However, in the absence of full disclosure of the audited accounts, we have refrained from publishing the results in DAIR. We urge the insurance companies to respond to this concern for transparency and make their complete audited financial statements public, including their income statements, revenue accounts and notes.

Financial Highlights on the insurance companies in Lebanon:

Total shareholders’ equity of the 50 Lebanese companies amounted to $1.053 billion in 2014 against $981 million in 2013, an increase of 7.4 percent. Total Net Premium Written amounted to $1.15 billion in 2014 against $1.1 billion in 2013, an increase of 4.2 percent. As a result, the risk of underwriting exposure measured by net premium written over shareholders’ equity for the Lebanese companies reached 109 percent in 2014, similar to the 110 percent figure in 2012. The rate in Lebanon compares positively with the Arab World average of 176 percent (see figure 4). However, the Arab World average is distorted by the underwriting exposure of four companies with extremely high rates of this risk. If we exclude the four outliers, the Arab World average would stand at 117 percent.

The insurance business is unlike any other business: as the risk expires, the collection of premiums becomes harder. Hence, bad debt or inadmissible assets are common among companies with Premiums Receivable in excess of 30 percent. In this context, it needs to be pointed out that Premiums Receivable for the cluster of companies labeled “Rest – Uncertain” represent 44 percent of Gross Direct Premiums, which is well above the average ratio for the two other company clusters and the sector overall (see figure 5).

While the Management Expense Ratio is reasonably stable over the 3 years, it was noticed that the cluster of companies labeled “Rest – Uncertain” are spending more than double on their Management Expenses when compared with the secure and transparent companies (see figure 6). This could be for two reasons; the first is due to the economy of scale since most of those companies have very small portfolios. The second, since all the companies are family-run insurance companies, the structure of expenses is set by the owner/management.

Although it is imperative to separate the cost of doing life insurance business from the non-life business, the data provided proved difficult to analyze bearing in mind the existence of composite companies. In spite of that, it is clear that the acquisition cost among the non-life companies in the “Rest-Uncertain” cluster is well above the others in Lebanon (figure 7).

The following table sheds some light on why very small insurance companies still exist in the current business environment (figure 8).

The World Bank’s comment on the current insurance solvency position in the insurance sector in Lebanon is to the point: “Solvency margin requirements are out of date and low by international standards. Local and foreign insurers and reinsurers (if any) are subject to the same minimum capital requirements. At 2.25 billion Lebanese Lira ($1.5 million), the absolute minimum is not out of line with international norms or a barrier to entry. An out of date solvency margin requirement at 10 percent of premium is required. As part of the future development of the sector, a more risk based regime should be explored. Initially, this could be developed as a risk assessment tool for the sector and the ICC before it is implemented as a solvency regime under a revised insurance law with appropriate transitional arrangements.”

As the World Bank commented, “it is not necessary to reduce the number of insurers to unleash further development,” we were reminded of sector development in one European country, Denmark. Denmark, with a similar population to Lebanon, is home to over double the number of insurance companies, yet it is a solid, well developed and properly managed insurance market. At the same time, consolidation has streamlined the Danish insurance market since the country felt the impacts of the global financial crisis in 2008/2009. Due to the crisis and as a result of the low interest rate environment, the number of insurance companies operating in Denmark declined from 174 at the end of 2008 to 115 in 2013. Compared with best practices and country examples such as Denmark, the Lebanese insurance sector can still cover much ground. 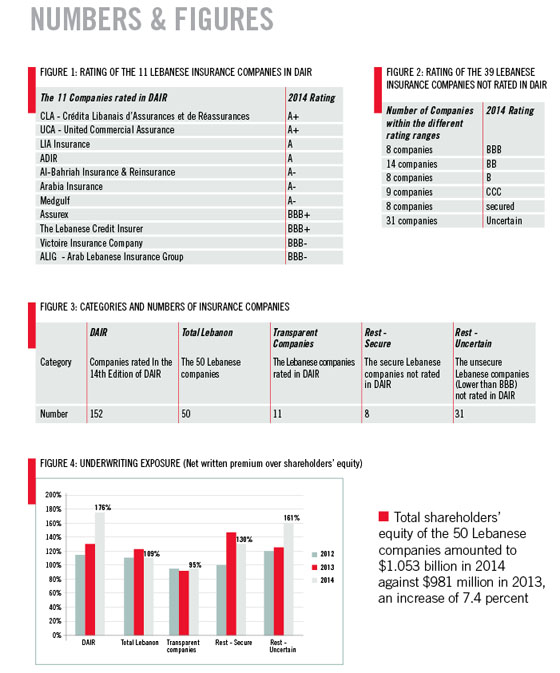 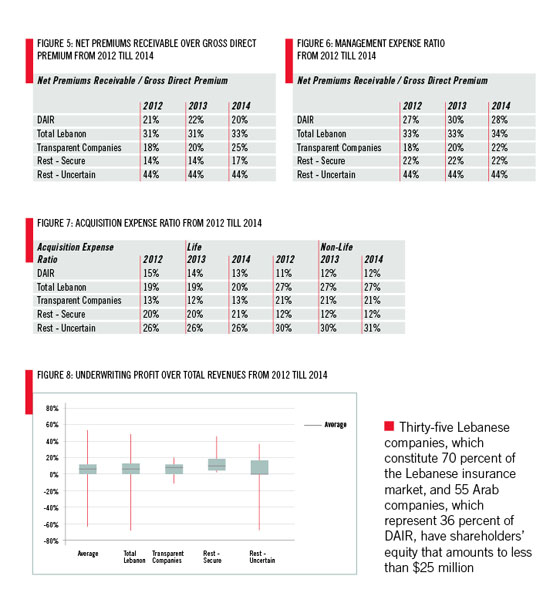 Way beyond cars and football