What do you do with a slew of unsellable books? When you’ve devoted years of your life to the restoration of a national library, you surely can’t bring yourself to throw them away. Cent Ans de la Presse au Liban, 1858-1958, a retrospective tome on 100 years of Lebanon’s press, was deemed unsellable because of a pagination error. When faced with the dilemma, President of the Lebanese Foundation for the National Library, Randa Daouk, joined forces with Galerie Janine Rubeiz curator Nadine Majdalani Begdache to launch a one-of-a-kind art project. The two asked local artists to create artworks out of the erroneous copies and were happily surprised when an overwhelming 55 of them agreed to upcycle the books. 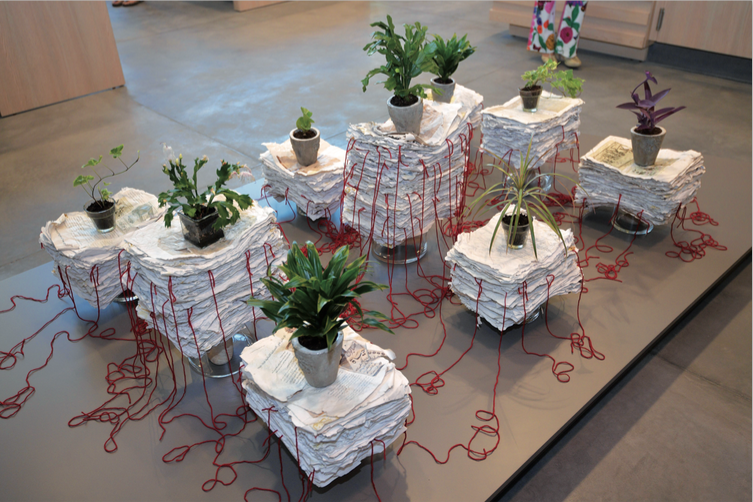 The resulting fundraising exhibition titled Bitassarof – open from October 15 to November 20* – marked the first time the general public has ever been allowed to enter the Lebanese National Library (LNL) in its new home in Hamra, a renovated Ottoman-style edifice adjacent to the Ministry of Interior, sitting between Sanayeh Garden and Hamra Street. The library’s central reading room, a large space with high ceilings, a second floor mezzanine and giant windows overlooking bustling Hamra, was a perfect showroom for the artworks. 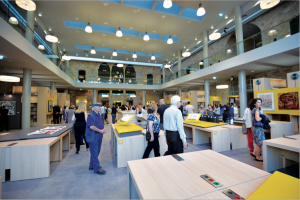 Lebanese greats such as Etel Adnan, Laure Ghorayeb, Mohamad Rawas and Jamil Molaeb, alongside many rising talents and a few rookies turned the pages, words, themes and images in the books into paintings, sculptures and installations. “It’s amazing that each artist had a different approach,” Daouk says of the pieces’ diversity. They range from a handgun carved out of an entire book by Zeina Kamareddine Badran, a painting of influential publisher Kamel Mrowa by Randa Ali Ahmad, an installation of hanging bird cutouts inscribed with “freedom” in different languages by Mouna Bassili Sehnaoui, and one book’s pages turned into a 360 degree cedar tree by Liane Mathes Rabbath. Daouk points out similarities across the pieces too: “If you look closely, you might see that different pieces feature Banat Lubnan – a journal for women [that existed] at that time.” 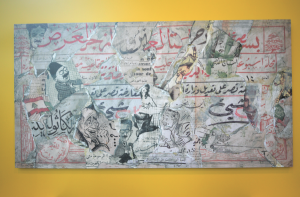 Daouk is proud of the exhibition and believes the artists were proud to be involved too. “The mix of artists is amazing and [everyone] did their best to give us their best work. The solidarity among them was amazing and they were very generous,” she says of their donations. The artworks went on sale on the opening night and profits will go toward the costly and time-consuming restoration of the library. 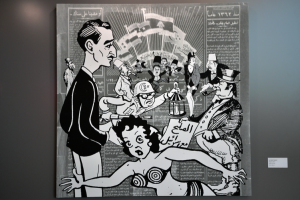 The LNL’s rich collection is full of treasures such as rare religious books, a collection of atlases and maps, as well as other books, manuscripts and documents. Launched in 1921 with 20,000 books and 3,000 manuscripts bequeathed by Viscount Philippe de Tarrazi from his private collection, and formerly known as Dar al Kitab, the LNL was housed underneath the parliament building in downtown Beirut until its closure at the onset of the Lebanese Civil War. After the war the books were re-discovered lying in boxes in a depot, and in the year 2000 the LNL rehabilitation project began under the Lebanese Ministry of Culture, beginning years of laborious work. Currently, the LNL’s collection is housed in a 3,000 square meter space at the Port of Beirut, where teams of professionals work on restoring damaged documents, treating them for insects, cataloging the collection and more. 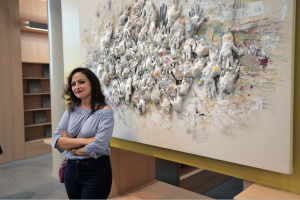 After years of dedication and hard work, the library today is in its final phase, but plans to open are still years away. Though the new library building’s two upper floors are ready, the basement is still under renovation. Soon enough, Lebanon will have a real (and likely virtual) public library available to the public. Daouk, who for 15 years was also part of the team that helped launch the Lebanese National Museum, says, “for me, without a national museum and national library there is no culture in a country.”

* Editor’s note: the exhibition was extended until November 20

Into a new dimension