Home LifeArt & CultureArtists For the love of art

A burnt book by Jean Boghossian

It’s amazing that a tiny strip of land can produce so many influential people. Lebanese genes have famously made it to top management in global powerhouses and become household names in fashion, but the global art scene is now seeing more of Lebanon too.

The International Contemporary Art Exhibition of the Venice Biennale, one of the world’s most prestigious  art events,  features three Lebanese artists this year. This is only the third time that Lebanon  has even had a national pavilion in the biannual exhibition, and Paris-based Lebanese multidisciplinary artist Zad Moultaka is representing his homeland by creating a powerful installation in the space. Brussels-based Lebanese artist of Armenian descent Jean Boghossian, famous for his burning art techniques, was chosen to represent Armenia. And, exhibiting in the Biennale’s main exhibition is Lebanon’s Huguette Caland, one of the most significant female artists of the Arab World in the 20th century.

The 57th edition of the Venice Biennale, which is open to the public from May 13 to November 26, is divided into different exhibitions held across many venues in the city, including the main international exhibition “Viva Arte Viva,” and 87 national pavilions. Executive Life takes a closer look at the three Lebanese artists who will be exhibiting at the event.

Moultaka first gained recognition as a composer and musician, performing at renowned festivals around the world, and at the Baalbeck International Festival. He had always been a visual artist as well, but only focused on that discipline after 2010. He is represented by Galerie Janine Rubeiz in Beirut.

His monumental and moving installation at the Biennale’s Lebanese pavilion is titled ŠamaŠ [pronounced: shamash], after the sun deity of Mesopotamia (largely comprised of modern day Iraq), who was also the god of justice. Inside the 650 square meter space, Moultaka uses sound, light, sculptures, and other visuals to recreate an ancient temple.

The project is rooted in the Code of Hammurabi, considered the first ever code of law, engraved 4,000 years ago on a majestic stone stele. At the top, ŠamaŠ is depicted exposing evil into full light and putting an end to injustice, just as the sun disperses the darkness. 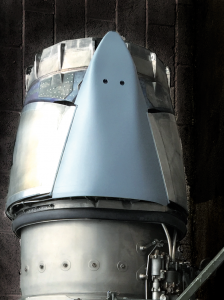 In his research, Moultaka found astonishing links between current and archaic objects and events. The exhibition underscores that violence has been plaguing the region for millennia and that history really does repeat itself. “There are a lot of very strange, troubling similarities,” Moultaka observes. Such parallels include the resemblance between the Hammurabi stele and a jet engine, as well as that of the round symbol of ŠamaŠ and the top view of a propeller – its blades are like the sun’s rays.

At the Biennale’s opening a chorus sings an eerie hum, and is replaced afterwards by 32 speakers. An additional 32 speakers hang from the ceiling. Meanwhile, a child recites the ancient Lamentation of the destruction of the city of Ur. Written in 2000 BC, it’s still relevant, ending with a proclamation that violence must stop. “The city of Ur was destroyed [thousands of years ago], and the lamentation sounds like it was written today. It’s incredible, the same thing has been happening for 4,000 years,” he says. The haunting hum takes on further meaning when the listener learns that it’s actually an extremely slowed-down sound clip of a flying fighter jet.

Boghossian is famous for using heat, smoke, and fire in his art. Sometimes, he burns through materials completely, inadvertently creating a violent effect, while other times he forges poetic, cloud-like patterns. He began painting 30 years ago, but only found his niche 15 years back while experimenting with different forms of contemporary art. He didn’t think he would practice burning for long, but ultimately states that it was fire that chose him. “Other art forms have constraints and some kind of objective, but with abstract art [specifically fire], I discovered freedom,” he recalls, adding, “It never goes exactly the way I want, but this is the beauty of fire.”

The artist burns different materials, including books, explaining that he often buys them at flea markets. “I don’t consider that I’m destroying them – even though I am, really – but I’m making something that has a message behind it. I love books so much that I try to preserve them and the knowledge inside,” he explains. Fascinated by how books have suffered, whether through wars or natural destruction, he aims to help books further bear the test of time. 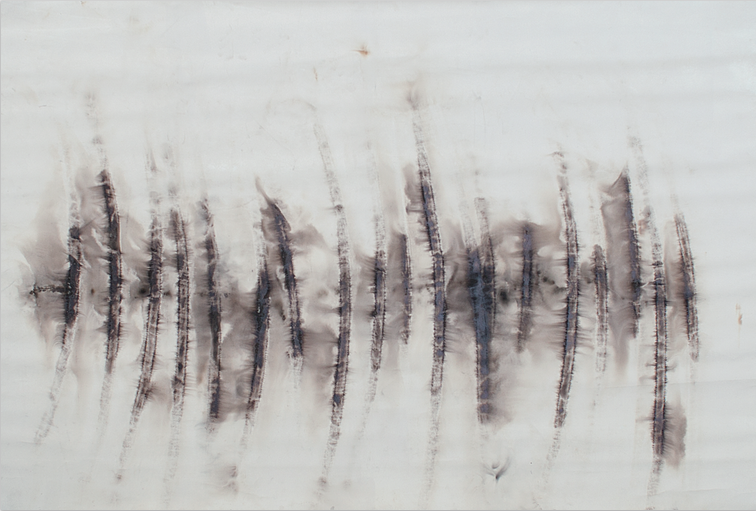 In his Biennale exhibition, Boghossian tells a story about the historical journey of books. His pieces focus on spirituality and elevated thinking, and look at the transmission and transcendence of knowledge, language and culture. These themes are especially relevant to the Armenian people, who have held onto their identity, culture and language despite centuries of invasions, wars.

The title of the exhibit, translating to “unextinguishable flame,” takes on multiple layers of meaning, from an obvious reference to his artistic method to his unextinguishable passion for art. This flame also represents the Armenian people, who he describes as “a little bit like fire” in terms of temperament. He says, “Armenians are strong, and have had to fight to preserve their culture and language. It’s a great achievement for such a small nation to be what it is today.”

The principle exhibitor in the Armenian pavilion, taking up 14 themed rooms, Boghossian also shares the pavilion with another artist.

Caland, now 86, is no longer painting, but her artwork is featured as part of the Biennale’s main exhibition, Viva Arte Viva, which includes 120 artists from around the world. Part of the exhibition focuses on rediscovering artists who are still largely unknown despite the importance of their work. Designed as an experience through nine trans-pavilions, Viva Arte Viva serves as an exclamation, a passionate outcry for art, celebrating and emphasizing the important role artists play, which in this age of anxiety is the essence of what makes us human.

It’s fitting that Caland be featured in such an exhibition as she is part of a generation of artists that has shaped artistic identity in her native Lebanon. Caland is the daughter of Lebanon’s first president, Bechara El Khoury. When she decided to pursue painting at the age of 16, it was frowned upon, as young ladies of her status weren’t meant to get their hands dirty with paint. Not only did she paint, she became one of the region’s most prominent female artists of her generation, creating bold, abstract works that often contained sexual imagery, subtle and otherwise. Her art has been featured in international museums and galleries, and at a recent charity auction in Beirut, one of her pieces sold for over $300,000. 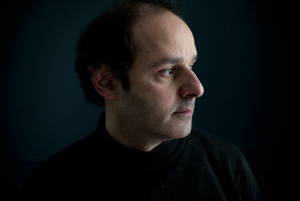 To exhibit at the Venice Biennale is a top honor – but artists also see it as a huge responsibility to be the face of creative expression for their respective countries. It’s as important for the individual as it is for the nations they represent.

Participating also comes with a set of challenges, requiring months of work, not just from artists, but also, teams of curators, gallerists, designers, and logistics personnel, who work under strict guidelines at home and on the ground in Venice.

The Biennale requires that national participants apply through their respective governments, which is especially difficult in Lebanon, since there is no organizational body for this purpose – perhaps one reason why this is only the third time we are taking part in the event. Lebanon’s first national pavilion was in 2007 with a group exhibition featuring Fouad Elkoury, Lamia Joreige, Walid Sadek, Mounira Al Solh and Akram Zaatari, curated by Saleh Barakat and Sandra Dagher. And the second in 2013 when Akram Zaatari presented his film “Letter to a Refusing Pilot.” While most governments give their representatives logistical support and funding, Lebanon’s Ministry of Culture only offered Moultaka moral support and stationary with the ministry’s logo to aid his participation.

Moultaka said that the event cost around 820,000 dollars, between renting the pavilion, shipment, insurance and other expenses, although some staff worked for free. “I began with zero, nothing. It was very difficult, and I am lucky to have the people in my gallery who all believe in this project. Everybody worked really hard, not for me, but for the project, for our country,” he says.

To finance his participation Moultaka received various private donations. He calls Lebanon’s private sector a miracle because of how much it aids various initiatives. It also happens that Moultaka and Boghossian are not only friends, but the latter’s Boghossian Foundation was one of Moultaka’s financial donors.

But, unlike their positive relationship, Moultaka observes many local artists are individualistic and don’t work together for the common good. “People are so talented, but they don’t think collectively. We should all be in this together. This is my project, but it’s not only about me,” he says. In the face of such neglect from the government, it’s especially important for artists to stick together. If Lebanon becomes renowned for a few artists, the whole industry benefits. 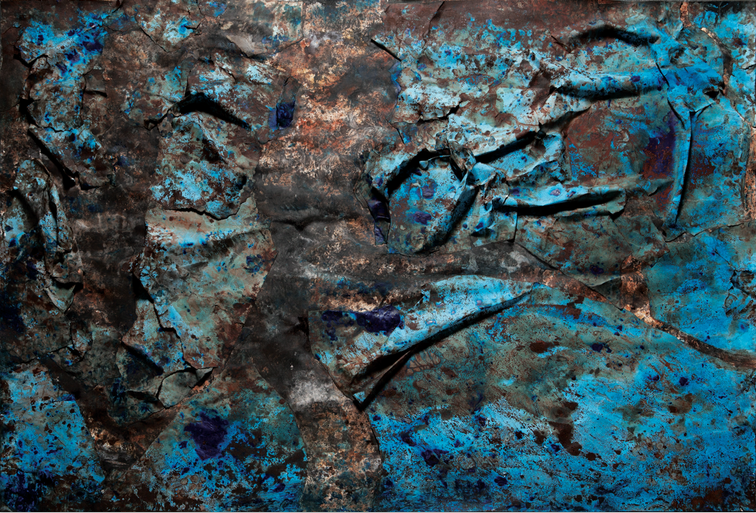 Private initiatives are plenty, talent abounds, but there is no central body to aid the structured development of the local art scene, or support artists who partake in significant events like the Venice Biennale. “What we need is more support from politicians,” Moultaka says, “Today we have so much potential. We should receive financial and other kinds of help. It’s not normal that they don’t support us.” Ultimately he concludes, “Culture is not important to our politicians, but it should be a priority because culture is what can save us as human beings.”

The three artists are privileged in their own ways, but also have extraordinary talent and vision. Like many Lebanese they’ve also had to work harder than their counterparts from countries that support national talent – in Lebanon hard work is multiplied by the number of obstacles in the way.

That three talents from Lebanon managed to make their way to such a prestigious event is an impressive feat. Imagine how many more success stories we could have if only we weren’t left to fend for ourselves.