Lebanon’s art scene may be nascent but it’s charged with potential – and it’s a few dedicated enthusiasts who are boosting the country’s most promising talents, regularly and well.

The Association for the Promotion and Exhibition of the Arts in Lebanon (APEAL) added two more local artists to its creative family, announcing the recipients of its Maria Geagea Arida Scholarship Award at a press conference at the Albergo Hotel last week.

Jessika Khazrik and Raafat Majzoub were accepted into the Massachusetts Institute of Technology’s unique, trans-disciplinary Master of Science in Art, Culture and Technology program, which this year only admitted eight candidates. Thanks to APEAL, they’re being launched into a prestigious international program, and a life of vast possibilities – but it’s more than that.

“This grant is an investment in our local capacity, as opposed to an isolated scholarship award… APEAL promotes contemporary Lebanese art in Lebanon and abroad,” Raafat said in a speech at the event, expressing pride in now being part of an organization “on the frontline of change.”

Khazrik acknowledged the privilege of the award and thanked APEAL for the faith in her potential and future. She highlighted that APEAL “is enabling an ongoing conversation with the legacy and eminence of [Lebanon], its art and its politics.” 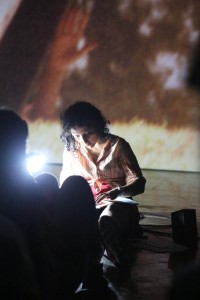 APEAL’s president Rita Nammour echoed the broader vision, saying, “Art in its various forms can act as an impetus for change towards more openness, evolution, tolerance and understanding.”

Majzroub is an architect, artist and author, co-founder of award-winning The Outpost magazine, and currently “writing” a novel through a series of instillations. The multitalented Khazrik has worked in a wide range of multimedia, performance art, sculpture and text, with her work performed and exhibited in Lebanon, Europe, and the US.

APEAL, launched in 2008, aims to nurture the seeds of Lebanon’s artistic potential, offering scholarships, sponsorships, and commissioning, in addition to working to set up a museum.