Art and activism go hand in hand for multimedia artist Hady Sy, who for years has been using his artwork to draw attention to social issues such as war, religion, identity and love. His latest solo exhibition, currently on display at Saleh Barakat Gallery in Clemenceau, Beirut, examines the social and political role of money. The powerful exhibition – titled Sifr, meaning zero in Arabic – features photos and installations based on a zero dollar note that Sy created. Using these fake bills in different contexts, the artist shows how money impacts relationships, industries and life in general.

The English word zero has its etymological roots in the Arabic word, sifr, and several large prints at the exhibition show the linguistic evolution of this word. Sy purposely used the Arabic word for zero in his work to remind viewers of the region’s contributions to mathematics, namely those of Persian mathematician Al Khawarizmi, whose name was even Latinized to algorithm. Sy discovered that the representation of zero as a circle can actually be traced back to the ancient Mayan civilization, where it was utilized as a symbol of cyclical regeneration. The concept of zero later moved to India and the Middle East. Sy asks, “What is zero? It’s nothing, emptiness. So the genius and absurdity is that this zero, which is nothing, makes the difference between 10, 100, 1,000 and 1,000,000.” 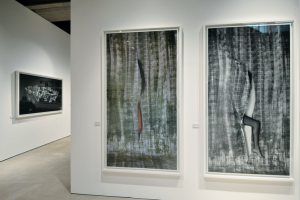 The artist maintains that money is nothing more than paper, ink and design, and its assigned value is not real. His zero dollar bills are identical to American dollars, aside from a few details like the word “Sifr” instead of the currency’s portraits, and numerical zeros on the notes’ corners. In his Beirut studio, Sy took photos of these notes in various contexts and created mixed-media installations using plexiglass, hay, cement and other materials.

Using popular expressions and ideas, he plays on words and draws haunting parallels that examine corruption, greed, selfishness, cruelty, violence, poverty, justice and more, confronting his audience with the dystopian world of money. A lot of his work also pays tribute to famous artists. He recreated Andy Warhol’s $100 bill as a zero dollar, used René Magritte’s famous umbrellas, filling the underside with money, came up with the “New Origin of the World”, an upgrade of Gustave Courbet’s known work, and reproduced the musical notes from The Beatles’ song, “Can’t Buy Me Love”. 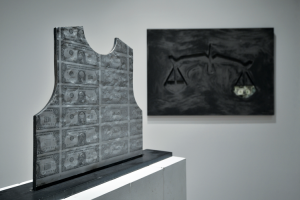 Two similar pieces depict a donkey looking at a dollar bill dangling from a stick, which Sy says is an allegory that the pursuit of money is an illusion. Reports say that the eight people wealthiest people in the world own as much as the poorest half of the population, and Sy observes that the value of money is decided by the people who control it.

One of Sy’s personal favorites is a triptych that, at first glance, looks like regular 2D photos of bullet-hole shattered buildings. Coming closer, the viewer can see that small sharp objects are protruding from each bullet hole in the photos – rolled-up zero dollar bills. Sy says that the artwork is an optical illusion, alluding to the fact that warmongers present the world with the illusion that war is often an issue of religion or ideology when war is, in fact, a profit-making machine. He explains, “war is the biggest business in the world. Each bullet hole you see, somebody sold the bullet. Religion and other reasons are a tool used to make war because war makes them money. That’s all. You cannot imagine how much money there is.” 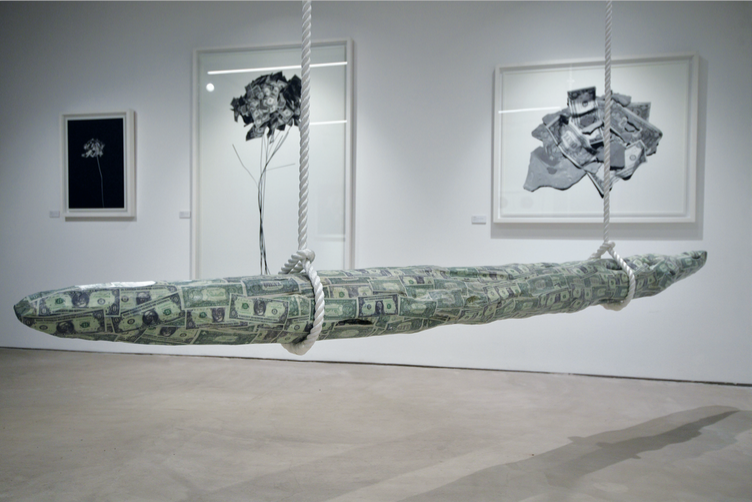 Other pieces focus on Lebanon. One photo shows colorful garbage bags stuffed with zero dollar bills, each color corresponding to a political party in Lebanon. “The garbage crisis is only a question of money,” remarks Sy. He also reflects on Lebanon’s unusual use of dual currency. He shows the zero dollar bill side-by-side with a one Lebanese Lira bill that has been out of circulation since the currency plummeted in the ‘80’s. He asks again, “What is the value of money and who gives it? The value of the Lira was huge [before the crash], now it’s sifr.”

Sy’s zero dollar is not only void of value, but it is also a symbol of a world fast becoming void of values. While he admits that having money can make you happy, he warns that money without morals is “like a cancer”. His exhibition forces us to examine ourselves, what we constitute as wealth and how we attain it. Sy remarks that in the past people earned a living by providing services or products in exchange for money but “now you go and study how to make money, which is totally absurd”.

The artist acknowledges the irony that these very artworks are for sale for money, in his exhibition but explains that he wants to challenge the world of the arts. During the global financial crisis in 2008, Sy was working in Berlin and had a hard time selling his work. He recalls,“I had so many pieces that people had ordered but they never came to get them. The dollar was falling, it was a nightmare.” He adds, “What is the value of an artist? What is the value of art? It’s zero when there’s a financial crisis. Nobody cares.”

A roadmap for the first licensing round