Home LifeArt & CultureTheatre Dinner and divorce at the Monnot Theater

For Lebanon’s largely religious, family-oriented society the alarming rate of divorce in the country is a sensitive issue. Whether you blame the economy, social pressures or simply a global trend, there is no doubt divorces are occurring more frequently than ever before, and while divorce is still widely considered taboo in Lebanon, this uptick has made it an increasingly prominent subject for popular discussion. So, it’s no surprise that divorce has made it onto the stage, addressed carefully and comically in Carlos Chahine’s new adaptation of “Dinner with Friends” or “Kif Ken el Asha,” which premiered at Monnot Theater on March 23 and is continuing its run through April. A Lebanese take on the Pulitzer Prize-winning play by Donald Margulies, which was made into a 2001 movie of the same title starring a quartet of Hollywood A-listers, it’s a look at a married couple’s breakup from multiple perspectives. 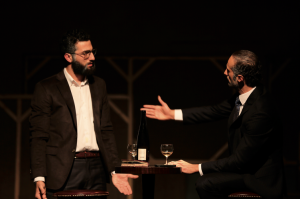 It’s a story of love, desire, monogamy, fidelity, and friendship that starts with a dramatic dinner and announcement of divorce. The two couples in the story have been friends for years, and with each scene, the plot thickens and layers of both couples’ relationships are peeled away. It’s not nail-biting suspense, but rather more the gradual revelations of the true character of each person, much like real life. As the audience sees both couples interact with each other, and how their own relationships change with time and as a result of the news, it’s clear that there are multiple sides to every story. There isn’t a “right” solution to issues in relationships, and marriages go through different kinds of natural progressions. Ultimately, the play doesn’t dictate a moral as much as it illustrates variations and evolutions in matrimony and friendship. 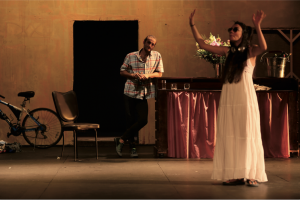 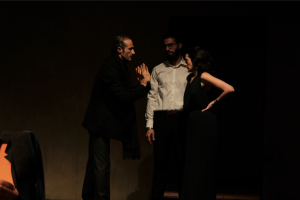 What’s compelling about the play is it has more questions than answers and will have you thinking about your own life long after you’ve left the theater. Its director, Chahine, who lives mostly in Paris and is also an actor and film director, was inspired to tell the story for the first time in Arabic to his Lebanese audience after reading the play in a New York library four years ago, saying it was the right time to present “a play that can be easily understood by a lot of people.” Describing the performance, he says, “It’s the story of two couples who have known each since university and spend [a lot of time] together. One couple decides to divorce, while the other can’t accept the idea. It can be seen as sad, or it can be happy, the question is: What is best? What should someone do when they’re unhappy? Stay together for the children and society, or have the courage to start a new life?”

It’s a painful debate many couples encounter, but divorce definitely deserves a conversation. Talking openly about this and other taboos encourages understanding and sensibility. Seeing divorce discussed on a live stage, approached with lightheartedness, sincerity and seen from multiple angles, may not stop divorces from happening, but it’s a great example of how art can contribute to enlightening society, alleviating people’s pains and helping them feeling less alone in difficult times.