Lebanon’s theater darling Nada Abou Farhat is pregnant in real life and on stage. When she revealed she was expecting to her longtime friend and theater veteran Gabriel Yammine a few months ago, he decided to write and direct a piece just for her. She stars in the dark comedy titled “Heble, En Cinq,” currently on at Metro Al Madina, alongside Zeinab Assaf, Oussama El Ali and Joyce Abou Jaoude.

In the play, Abou Farhat’s character, Claire, is a pregnant woman in her late 30s reflecting on her life and anxious about the future of her child. Raised around floundering marriages in a home with a combative mother and feeble father, Claire talks to the audience about her hilarious and miserable efforts to find love, and the personal struggles she’s encountered in the confines of Lebanese traditions. Meanwhile, each of the other actors plays multiple characters, switching effortlessly between the roles of Claire’s family, friends, teachers and others. Ultimately, the play is an intricate, witty look at the pressures exerted by Lebanese society, especially on women. 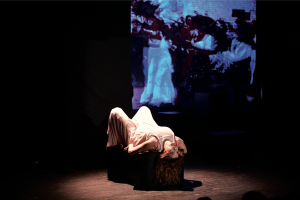 One might find it strange that a man is so accurately writing from the perspective of a pregnant woman, and Yammine, who has written over 90 adaptations and original plays and directed close to 30, reveals that the script is entirely based on stories from real life. “I had to put myself in [a woman’s] shoes and feel what she feels. I talked to Nada [Abou Farhat], my wife and friends. Life has more absurdities than people imagine. When you start expressing those ideas they become theater, and sometimes people don’t even believe it,” he explains.

Indeed, truth can be stranger than fiction. The play is peppered with amusing anecdotes about awkward dates and strange home remedies related to pregnancy. Perhaps it is these unusual incidents and hyperbolic characters that make the play refreshingly non-cliche, while still relatable. 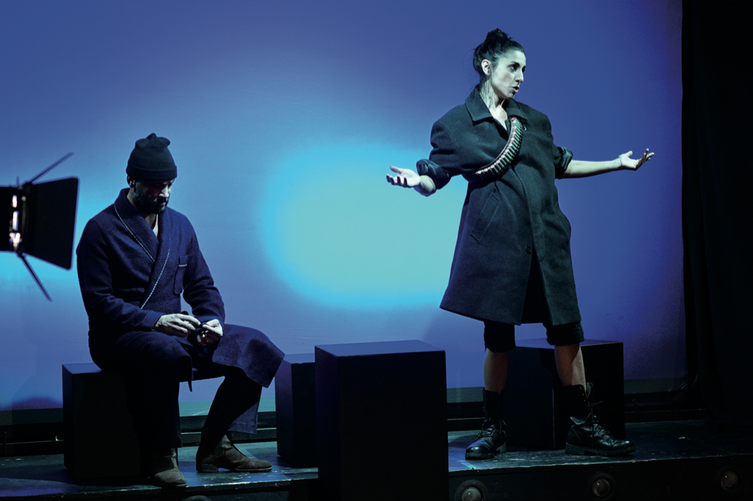 Though viewers might take away messages from the story, the playwright maintains he is just using his artform to illustrate ideas, and there are no messages he wants to prescribe. “Artists use their tools, whether it’s a paintbrush or a guitar, to express pain, happiness and other emotions. If [viewers] see messages, that’s good, but they might see messages that we didn’t even see when we were [creating the piece],” he explains.

To Yammine, art in general and theater specifically, especially when introduced at a young age, foster dreams and give rise to better, more peaceful citizens. That’s why to him, theater is a need, and he laments that the Lebanese aren’t very appreciative of the artform. Theater advocates are active in Lebanon and Yammine’s own life is dedicated to it. “Theater is my life, not my work. I feel dead if I don’t do this and that’s why I keep going,” he says, but admits it’s virtually impossible to profit locally. The market is so small that even if a large percentage of the population came to see a stage production, the actual amount wouldn’t add up to much. The same applies to the local film industry, although he points out a major distinction between theater and the big screen; being in the same room with actors during a live show and feeling their breath and energy connects actors and audiences in ways screens cannot. 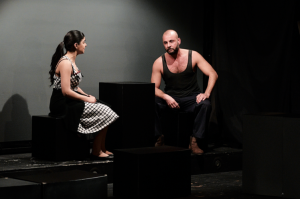 To Yammine, it’s people in positions of authority, headmasters, teachers, as well as the government that need to do more – but first they must believe that theater is important. The government could help financially, especially by opening more theatrical spaces, giving a wider range of people exposure and access to plays. But he acknowledges the government has other priorities and sadly the arts are not seen as a necessity.

Another major problem is one of perception. In Lebanon people often see arts as high-brow and classy – not for everyone, only for the educated. “This is totally wrong and that is what leads to the demise of art,” Yammine says, explaining that the very people who consider themselves cultured are actually contributing to art’s failure because they are making it exclusive and not giving access to the public. In order to make “Heble, En Cinq” more accessible, Yammine – a passionate advocate for the Arabic language – insisted on having the actors use traditional dialects from all over the country in the dialogue.

Yammine is convinced that performance art and other art forms can be a key to improving any society. “What I know is when people start to [appreciate] theater and art, things will change. And this change can happen quickly. I believe this,” he states, adding, “People need to start believing that [art] is a need, like water. No one believes this yet and this is sad. I can’t do more, just continue my work.”

Of spirits and whiskies