Home LifeAuto The cars of the future are here

Flying cars are officially here. April saw a sudden surge in news about Vertical Take-Off and Landing (VTOL) vehicles – otherwise known as flying cars. Kitty Hawk, a company backed by Google founder Larry Page, announced a prototype aircraft, and another vehicle was revealed by Slovaki’s AeroMobile. This was followed by an entire conference on aerial vehicles, organized by Uber in Dallas, Texas in late April, and German company Lilium’s successful test of its all-electric model. This has been a month of news straight out of The Jetsons. It may be years before the luxury of a flying car becomes available to the masses, but the good news is that there are plenty of great non-flying options already on the market, with even more innovations coming to Lebanon throughout the year. 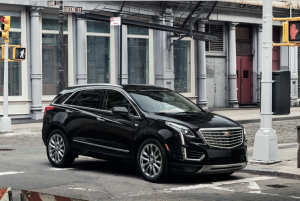 Everyone seems to be hot for crossovers, with several luxury car-makers upgrading their existing models and launching entirely new ones this year. BMW’s new lineup includes an improved X3 that’s set to make its debut at the end of the year, though few details about the upgrade are currently available.

Cadillac is moving forward with its expansion by introducing a series of new vehicles over the next few years, starting with a crossover. The first edition of the sophisticated XT5 will replace the brand’s SRX. The XT5 is 126 kilograms lighter than its predecessor, making it more efficient and agile. The luxurious vehicle has a spacious interior, heavy on craftsmanship, and is packed with new integrated technology to make it an entertaining and comfortable ride. 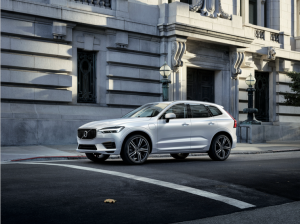 To celebrate its 90th birthday, Volvo is launching a new generation of the XC60. After the immense success of the original, said to be one of the safest cars ever made, and which sold close to 1 million units over nine years, the new and improved model promises greater levels of comfort and safety, as well as better performance and a sleeker look.

Alfa Romeo is getting in on the action too, introducing its first ever SUV after over a century in the auto business. The compact and sporty Stelvio is a curvy crossover that’s already received great reviews. Named after the highest mountain in Italy, the Stelvio is a thrilling ride with excellent handling, and equipped with key safety features. Every bit the Alfa Romeo, it’s stylish inside and out, and tailor-made for the driver and passenger comfort, making it the perfect travel companion. 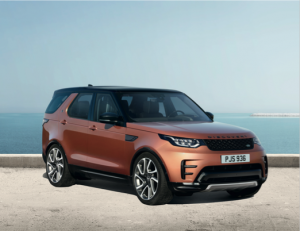 Not quite a crossover, the Land Rover Discovery is in its third generation this year and available in Lebanon. The all-new premium midsize SUV redefines the segment with its dynamic design, superb comfort, and attention to detail. The interior features a state-of-the-art infotainment system and is ready to meet family-sized demands with USB sockets to power everyone’s mobiles and tablets. Meanwhile, the outside is sturdy and set for adventure; going off-road has never been easier, with all-terrain technology that’s simple to use for all types of drivers. 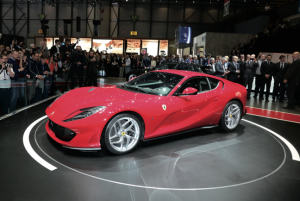 For car buyers looking for a thrill ride, the year will witness the launch of exciting new sports cars. It’s an especially auspicious year for Ferrari; the prancing horse story began exactly 70 years ago. Paying tribute to its legacy as the only manufacturer to continuously produce a 12-cylinder sports car throughout its existence, Ferrari is commemorating the milestone with a limited edition 812 Superfast – the brand’s fastest car yet, which, coming from Ferrari, is saying a lot. With an innovative design that comes in two colors, Rosso 70 Anni and Grigio Caldo Opaco, it’s so exclusive, it’s only for sale to pre-selected buyers. If you want to catch a glimpse of one out of only 500 produced, the car is touring the world and  expected in Lebanon this summer for the much-anticipated anniversary celebrations. 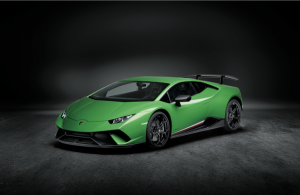 Not to be outdone by their fellow Italians, Lamborghini launched the new Huracán Performante this year, and it’s set to arrive in Lebanon just in time for summer. It’s lost 40 kg since the last edition, and though it doesn’t quite take flight like the cars of the future, it boasts ALA, meaning “wings”  in Italian and  an acronym for Aerodinamica Lamborghini Attiva, a patented system ensuring the best aerodynamic set-up for every driving condition. The tiny but mighty sports car is engaging and dynamic, with – as per its name – unparalleled performance. With its V10 engine, the little green beast is so extreme, it’s being dubbed a “street fighter.” 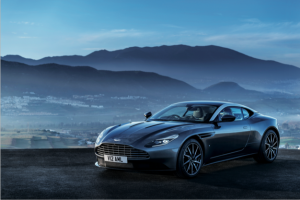 Speaking of powerful engines, earlier this year in Lebanon, Aston Martin debuted the DB11, which has been hailed as their most significant car since 2003. Launched under the company’s new second century plan, the bold supercar has an impressive 5.2-liter twin-turbocharged V12 engine, pioneering aerodynamics, and a new bonded aluminum structure. The head-turner stays true to the brand’s mission to produce the most beautiful cars in the world with its fresh design that accentuates the iconic grille and clamshell bonnet, in addition to a stunning handcrafted interior. 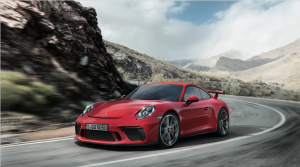 Never one to take a backseat, Porsche is giving the iconic 911 GT3 a facelift this year. A road-approved race car, it’s low, light and fast, soaring from 0 to 100 km/h in 3.4 seconds. Though it’s hard to perfect a masterpiece, this edition is even more intense than its predecessor – featuring a redesigned chassis with rear-axle steering and an expanded four-liter flat, six-cylinder engine that is virtually unchanged from its race car counterpart. The GT3 serves as a casual reminder that although Porsche makes luxury vehicles, racing is in its DNA, and it basically owns the road. 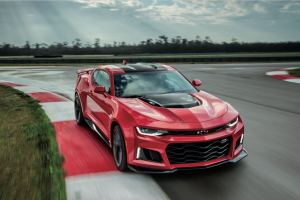 From across the Atlantic, the ultimate all-American muscle car is challenging the European sports car squad. Coming to Lebanon soon, the Chevrolet Camaro ZL1 is designed to excel at everything from design to performance, and is built for the street as well as the track. Refined as ever, it features a supercharged LT4 6.2L V8 small block engine and unprecedented levels of technology that result in a one-of-a-kind driving experience. Between all these trendy crossovers and sexy supercars getting so much buzz, other vehicles aren’t going to be left in the dust. After a few decades of the car’s absence from the market, Alfa Romeo has re-launched the beautiful Giulia, previously manufactured in the 1960s and 70s. With its luscious curves and alluring details, the new four-door sedan is causing quite the stir, winning countless awards, such as Top Gear’s Car of the Year in 2016, and several others for its aesthetics – no surprise, as this family of Italian cars is renowned for its good looks. The Giulia has remarkable aerodynamics, features breakthrough innovations, and is equally impressive under the hood– packing a powerful engine that ranks best in class in terms of emission levels. 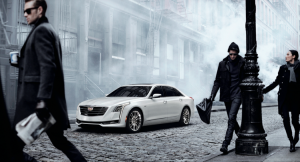 In addition to its new crossover, Cadillac has unveiled the first ever CT6, a luxurious prestige sedan that’s bound to make a big impression. Featuring a completely new twin turbo V6 engine and its forefront V6 powertrains yet, the car has one of the industry’s most advanced automotive body structures. Cadillac’s new formula for the luxury sedan integrates a series of technologies that ensures the drive has comfort, indulgence, and connectivity.

Volvo’s newly-launched S90 premium sedan is a giant step forward for the brand. It not only looks great with its improved signature LED headlights and new grille, but, is also filled with a range of new technology like cloud-based apps and services. As part of the brand’s vision that no one should be killed or seriously injured in a new Volvo by 2020, the S90 offers cutting-edge safety features, like its IntelliSafe system, Run Off Road Mitigation, and the advanced semi-autonomous Pilot Assist. The all-new Infiniti Q60 is an impressive-looking and truly Japanese coupe with a muscular body and an alluring “face.” Lower and wider than the previous model, the car’s LED headlights emulate the human eye, and the dynamic double-arch grille ensures it’s instantly recognizable as an Infiniti. The premium sports coupe looks as good as it drives, offering exhilarating performance thanks to its three liter V6 twin-turbo engine and exclusive VR powertrain. Maserati unveiled a revamped Quattroporte late last year, the first facelift in over three years for their flagship sedan. The current sixth generation model offers more on-board comfort and infotainment than ever before, as well as additional safety features, and a restyled exterior with sophisticated details in the new bumper design, front shark-nose grille, side skirts, and mirrors. With several trims to choose from, the Quattroporte reinterprets the luxury sedan the Italian way, making the car, which has been around since the 1960s, even more of an icon. 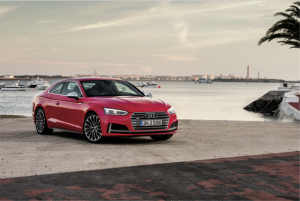 A new generation of Audi’s popular A5 Coupe and Sportback, and the sportier S5 Coupe have recently arrived in Lebanon. Athletic and elegant, the second generation siblings boast new looks with sophisticated aerodynamics and high tech offerings, such as innovative infotainment and driver assistance systems. Compared with the previous model, the A5 offers up to 17 percent more performance, while consuming as much as 22 percent less fuel. The S5 – with a turbo V6 engine – has all the performance of a sports car packaged in a dramatically elegant coupe. 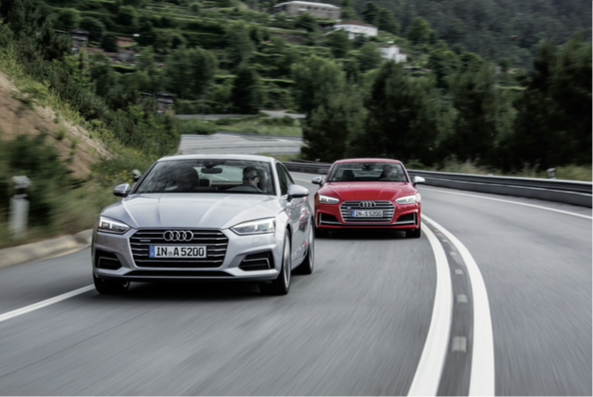 Among its new offerings in Lebanon, Mercedes-Benz recently revealed an all-new E-Class Coupe. A new step in the evolution of the car, it’s stylish, sporty and intelligent. With a luxurious, modern exterior, and  a next-level interior with technology that gives drivers control without having to lift their hands from the steering wheel, this fifth generation coupe offers the perfect combination of features for a whole new driving experience.

This year, BMW is also launching the seventh generation of a Lebanese favorite – the 5 series. The executive car has an improved design inside and out, as well as semi-autonomous features and an adaptive drive system that makes driving an easier and more fun experience.

Whether you’re into the crossover craze, love the excitement of a super car, or opt to play it safe in an updated icon, it’s likely that cars are staying on the ground for a while – and with the way the Lebanese drive, we certainly hope they do. There are tons of challenges to overcome before the flying cars we’ve seen in cartoons become safe for mainstream use, so it’s probably worth investing in at least one more road-bound car before your future airborne purchase.

And the livin’ is easy