Champagne, or sparkling wine, was initially an accident — a nuisance even. In post-Medieval France, bubbles in wine were the unwanted byproduct of alcoholic fermentation under certain conditions, and they were dangerous. Some called it “devil’s wine” because its pressure often caused bottles to explode, sometimes starting chain reactions that destroyed much of the cellar’s stock. Though he’s falsely credited for “inventing” champagne, Benedictine monk Dom Perignon helped develop the region’s wine industry, initially researching wine bubbles in an effort to get rid of them. Evidently, over time people began to intentionally produce sparkling wine, with the Champagne region’s widely considered the most prestigious. The oldest still active champagne house, founded in 1729, is Ruinart. 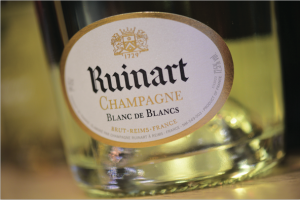 Today, champagne is almost always associated with good times — it’s a staple on New Year’s Eve, boosts the mood at brunch, and you probably had it at a wedding this summer. It’s the stuff of rap lyrics, Great Gatsby parties, and infamous Ibiza beach clubs. But champagne can’t be reduced to a pricey sparkling wine from a specific region in France or a status symbol — it’s an art, as well as an industry, and a luxury on many levels.

How it’s made
In order to claim the title “champagne” there are production rules and legal requirements. The most obvious is geographic — the product must be made in France’s northern Champagne district. A designated trade group fiercely protects the name against imposters, even brands who try using the word for unrelated products. In 1987, Perrier was stopped from marketing its water as the “champagne of mineral waters.” Yves Saint Laurent lost a high-profile lawsuit when trying to name a scent after the drink in 1993, and, more recently, Apple was reportedly warned against naming their 2007 iPhone color “champagne” (they went with “gold”). But it’s not just the name —Champagne’s cool climate and unique soil give its wine characteristic flavors. 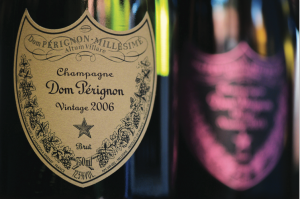 The grape varieties used are primarily combinations of the white grape chardonnay and the black grapes pinot noir and pinot meunier. Some fruit is grown by the house, while other times it’s sourced from local growers.
Champagne producers use the Méthode Champenoise, where champagne goes through two distillations, the first usually yielding a rather flavorless, acidic, low-alcohol liquid called vin tranquille. This can be blended with older wines kept in reserves, and is always combined with yeast and sugar. Champagne in the 19th century was significantly sweeter than that of today because more sugar was added, but the current trend is tart. Bottles marked as brut nature, brut zero, brut sauvage, and extra brut contain almost no sugar.

This blend is almost always bottled but not sealed completely — using glass that is thicker and heavier than that of wine to withstand internal pressure — into the same container in which it will later be sold. Champagne must spend at least 15 months in this phase before release, but many houses let it undergo a second fermentation process for longer. Throughout this time special machines move bottles to ensure yeast interacts with all the liquid. This long-term second fermentation sets champagne apart from other sparkling wines as it happens in each bottle individually, giving wine depth and complexity, unlike Italy’s increasingly popular prosecco, which is usually fermented in stainless steel tanks for as little as a few days or weeks.

In the end, bottles are disgorged, sometimes topped-up with additional champagne because fermentation can cause evaporation, and permanently corked. Non-vintage champagne can keep for up to two or three years, but more prestigious bottles, much longer.

A lot of work goes into making champagne and most of that work is in the cellar, says Wadih Riachy, manager of  Vintage Wine Cellar in Saifi Village, explaining, “the process is very delicate and time consuming. It’s the art of fermentation, years of knowledge, and a balancing act of methodologies — this is what makes champagne the ultimate luxury beverage.”

Differentiating among champagnes
Not all champagnes are created equal. The most common type is non-vintage (or multi-vintage) which is produced by blending several years of wines together to create the same taste each year in the brand’s signature. There are rarer releases such as vintages from one specific year that the cellar master thought deserved to be bottled on its own and that are aged for at least 36 months. 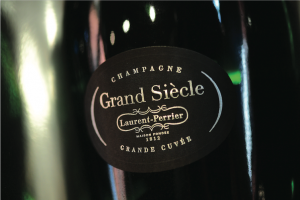 The most exclusive (read: expensive) champagnes are prestige cuvée, produced from only the highest quality base wines from top vineyards and aged for even longer. The Lanson brand created Lanson Extra Age Brut NV to mark its 250th anniversary, purposely staying true to its style while blending three reserve vintages. Famous brands that produce only prestige cuvée include Moët & Chandon’s Dom Perignon, Laurent-Perrier’s Grand Siècle, Krug, Louis Roederer’s Cristal, and Cattier’s Armand de Brignac Gold Brut or “Ace of Spades” as it’s nicknamed because of its packaging. 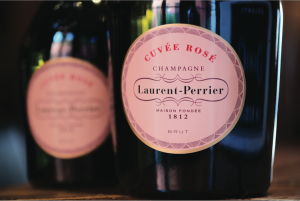 Rosé champagne is the only wine that’s legally allowed to blend white and black grapes in France, though sometimes this style is made the same way as rosé wines, by pressing only black grapes and quickly removing skins. Most houses use more white than black, but one interesting exception is Laurent-Perrier’s rosé, which is made with 90 percent black grapes. Blanc de Blancs is made solely from chardonnay, while Blanc de Noirs is made from only black grapes pinot noir or pinot meunier, or a blend of both. 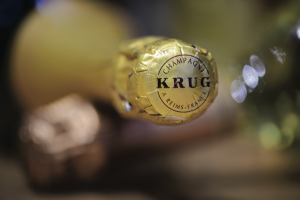 Drinking it right
Riachi suggests drinking champagne in flutes or white-wine glasses, but not in 1920s-style coupes supposedly modeled after Marie Antoinette’s bosom. Champagne should be served chilled, but not ice-cold. He says if you’re going to put ice in your champagne, you’ll likely ruin the taste, so better switch to a simpler sparkling wine. “Winemakers put all this effort into creating the best blend and you put an ice cube in it? In a champagne that’s already dry, ice doesn’t taste good because you’re enforcing acidity,” he says.

However after seeing this trend popularized, Moët created a fun concept champagne, Moët Ice, just for that, and other brands have followed suit. The champagne is actually a demi-sec, which means it’s sweeter than standard champagne, and tastes great on ice. By the same principle, it’s advisable to add flavors, fruits and syrups and turn a basic, acidic sparkling wine into a cocktail, but it’s a shame to mask a beautifully crafted champagne with sugar.

A note of warning, however, on average a cork escapes from a champagne bottle at a speed of close to 60 km/h, so however you like to drink yours, be careful with your aim.

Innovation
Champagne today is more accessible than it was in the past, but because of that it no longer quite fits the “rare” criteria we so often expect of a luxury product, and houses are continuously striving to offer something different to clients. Saturated markets with the increased competition from prosecco and a growing worldwide sparkling wine industry has forced champagne houses to go with new marketing strategies, like Lanson becoming the official champagne of Wimbledon, and Moët using celebrity endorsement and devising an international “Moët Day” with worldwide events. Brand representatives say it’s a way to show the Moët “savoir fete,” a play on words that means they know how to party, not just make great champagne. The aim is to go around the clock and show people all the ways you can enjoy Moët on different occasions, again trying to dispel the idea that champagne is just for celebrations. 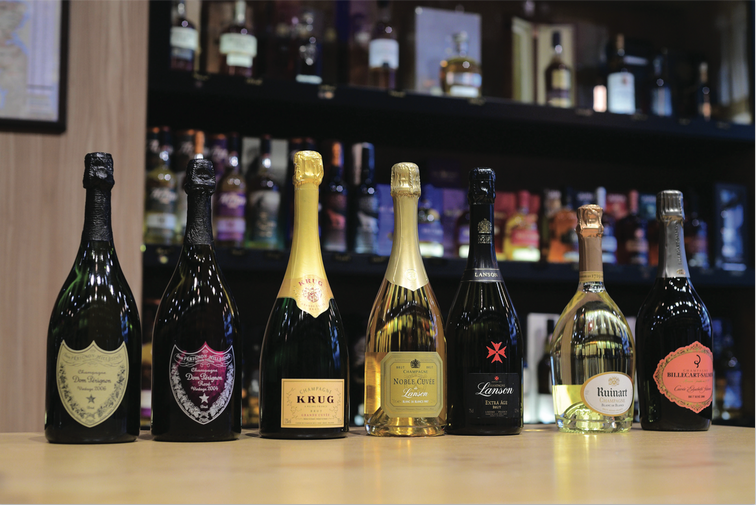 In a notoriously strict industry where innovation is rare and difficult, breaking rules is tough, but might be vital. Ever the pioneers, Moët & Chandon crafted the MCIII expression, an unconventional concept that blends three ways of producing champagne (in stainless steel tanks, oak casks, and bottles) using the best vintages from years spanning 1993-2003 and aged for 10 years: 20 years in one bottle. 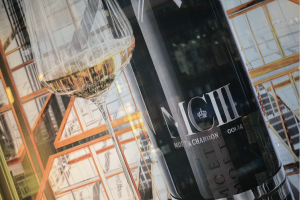 Innovation by individual brands is good for business, but it also helps keep the whole category relevant, say Moët & Chandon brand ambassador Amine Ghanem and Moët-Hennessy Market Manager for North Africa and the Near East Briac Dessertenne, who visited Lebanon for a series of events in July. They explain that it’s their responsibility to anticipate the future needs of clients and currently those needs are personalization and experiences. 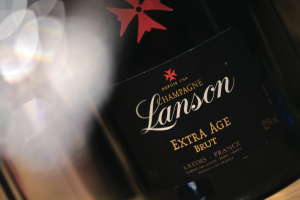 Speaking of experiences, Ghanem was in Lebanon to lead a Moët masterclass on the MCIII. During a visit to Beirut at the beginning of the year, Lanson Champagne’s export manager, Emmanuel Gantet, held a masterclass at Ashrafieh’s The Malt Gallery on his brand’s range, giving not only a history lesson on champagne in general, and on Lanson specifically, but also introducing several special bottles. Vintage Wine Cellar hosts champagne tastings a couple of times a year. Beirut’s five star Phoenicia Hotel has also held champagne pairing dinners, introducing people to various brands and expressions, while encouraging the pairing of champagne with fine cuisine.

In Lebanon, champagne is largely still viewed as something you drink on a special occasion, says Riachi. Perhaps because of its luxury status, it can be intimidating. While the Lebanese love luxury in general, Riachi says they will often have a flute before dinner, but later pair a bottle of wine with food, even though the price of champagne can be the same as a good bottle of wine. Meanwhile in Europe, it’s more common to order champagne with a meal, or drink it casually, he says.

It might take a while for the Lebanese to start drinking champagne casually but maybe it’s just not in Lebanese blood to be casual. If champagne is seen as the drink of special occasions, then perhaps we just need to find more excuses to celebrate.

The power of tourism