Art today is no longer confined to a canvas. Contemporary artists are pushing the limits with multidisciplinary projects, designing innovative installations, and even turning technology into pieces of art.

One such pioneer is photographer and multimedia artist Hania Farrell, who just became the first Lebanese to collaborate with luxury phone maker Vertu on a remarkable one-off Aster phone. The device is “an amazing piece of equipment” the artist says, referring to the British phone maker’s exceptionally high-tech features, so when she was approached by Vertu Lebanon she wanted to create a design that was both beautiful and scientific. 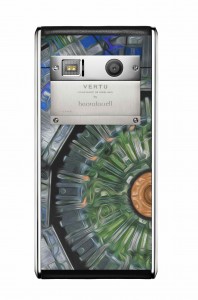 Farrell’s creation is a unique case of science-meets-art in a piece of luxury technology. The images on the phone’s background and case were taken at CERN in Geneva when she visited last year. The giant facility houses the Large Hadron Collider in a 27 km ring 100 meters underground. It’s arguably the world’s largest science experiment, where thousands of scientists are able to create Higgs boson particles related to the “big bang” theory. Farrell took the series of photos hoping to raise awareness about the amazing scientific achievements and as an artist, depict tangles of colorful wires. “Technology is raw and dry – wires are wires – and when encased or bundled up with other components result in a purely functional device. Art brings a new appeal to a device that can make it more palpable,” she says. 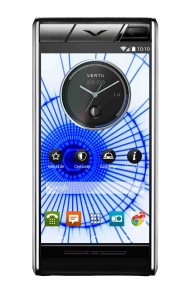 The Vertu Aster by Hania Farrell was debuted at the Vertu stand during Beirut Art Week 2015, where her other works were also displayed – at her own stand at the fair as well as at the Vertu boutique in downtown Beirut. For such an original artist, Farrell only shifted her career to photography a couple of years ago. Though she always loved photography, she was inspired to “take a leap of faith” by a spontaneous reunion with someone she photographed with her grandfather’s vintage camera at the age of 16 during the Lebanese Civil War.
But Farrell’s work goes beyond photography. “My work is multidisciplinary,” she says, explaining that it ranges from photography to video installations, and usually incorporate the space and design to convey a message. To Farrell, this type of art “transports you to a place that will trigger uplifting emotions with a forward looking message about the constructive process of renewal.” Her opinion of art in general is a scientific one too. “I believe art releases chemicals in the brain that triggers an emotion that can change the output of one’s attraction,” she says.

Real change is in our hands