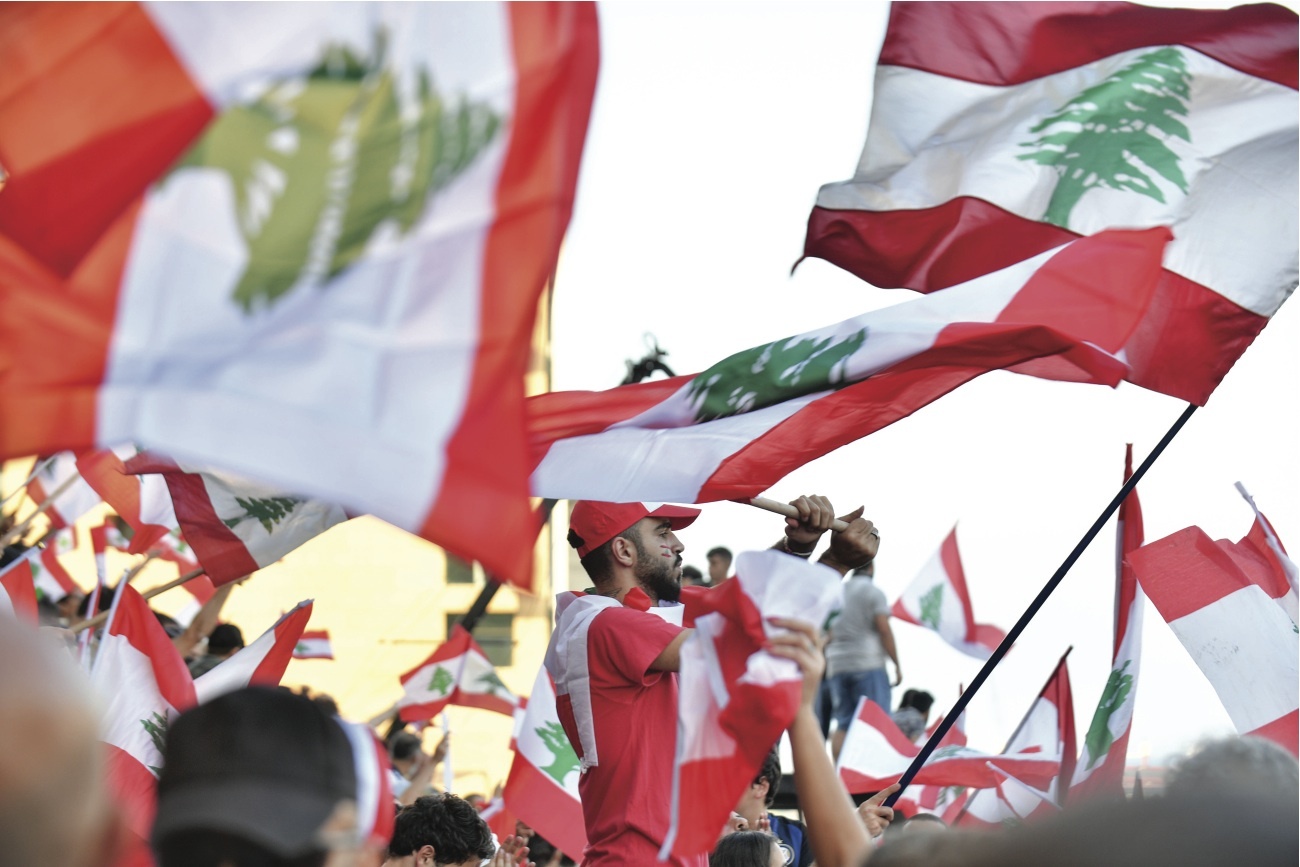 As the aftermath of the Arab Spring saw the Levant descend into another iteration of political posturing and advantage seeking of what in earlier times was often derogatorily called Levantine behavior, Iraqi-Lebanese journalist Husain Abdul-Husain shared his dismay. In a story published five years ago, he drew as his conclusion from a decade of Iraqi, Lebanese, and Syrian experiences of seeking change from popular roots that “non-sectarian, liberal citizens are few, helpless and irrelevant.”

One of the experiences he explained as underlying his judgment was the juxtaposition of the March 14 and March 8 protests and subsequent political movements in Lebanon. Expressions of two sharply separate (but each partisan and partially goaded) popular wills, these mass demonstrations on Martyr’s Square and Riad el-Solh Square in response to the assassination of former Prime Minister Rafik Hariri deteriorated all too soon into the wrangling for political power and positions by and within their eponymous movements.

Last month, Martyr’s Square was, by comparison, loosely packed—noting, however, that protests were nationwide. The difference between the calls for freedom, sovereignty, and independence on March 14 and the thawra (revolution) shouts of October 2019 could not have been larger. Contrary to what felt at least partly orchestrated and what was even affixed with some sort of marketing label by revolution-happy American diplomats as the Cedar Revolution, the Lebanese citizen’s protests in 2019 (and, according to reports, the protests in Iraq) delivered overwhelming evidence that the liberal, non-sectarian citizens in the Mashreq countries are no longer few, helpless, and irrelevant. Not anymore.

Far from making a defeatist impression, the young and older protesters of 2019 were uniting beyond political affiliations and bursting old mental shackles. Not just in the heart of Beirut—all over Lebanon. They were powerful, they were many, they were completely determined and defiant of intimidations and assaults. In Martyr’s Square, the ragtag assemblage of protests and revelry in late October radiated with an intensity that can only be described as revolutionary ecstasy—a web of powerful emotions, and an atmosphere supercharged with lifetimes of frustration and fear, of suppressed desires, and of dreams and hopes.

Even outside of the frenzy on Martyr’s Square, you could see it in the eyes of people who were walking back home from the protests—and even those attending a sober editorial meeting at our magazine—that these days of October 2019 were qualitatively and—in their nationwide dimensions—quantitatively incomparable to any Lebanese moment and national experience in the past 100 years.

The October protests had no primary leaders but rather relatively utopian demands for a fair society.

The narrative of this emanation of popular sentiment and will began to be formulated within the first three days of protests and will certainly evolve. As a continual wave of events without precedent in this country, however, the developments pose a tremendous challenge as to pinpointing their exact political, social, and economic drivers and demands, and, most difficult of all, their outcomes over time.

The difficulty and simultaneous need to talk about possible impacts of this new revolution is put into perspective when one thinks of the aspirations, expectations, and actual results of the Arab Spring in Tunisia, Egypt, and Libya at the beginning of this decade. Not only did the Arab Spring uprisings devour some of their children in the often-seen pattern by which rebel leaders turn into the next iteration or mirror image of the leaders they rebelled against, but the entire movement came to be lamented by many Arab scholars as an Arab Winter just a few years after the initial euphoria of 2011 and 2012.

It has to be mentioned here that the Lebanese October protests had no primary leaders but rather relatively utopian demands for a fair society and political system, a better economy, and an end to corruption.

It, furthermore, should be self-explanatory, but still needs to be emphasized, that the Lebanese national case of a multi-fragmented, consociational country is beyond comparison. No other country would be similar in having a confessional political system that persists in contradiction to its constitution and that exists under economic conditions that defy all conventional understanding.

The list of the peculiarities of this economy only begins with a dollar-peg that has lasted for more than two decades, and a balance of trade that has been not just consistently negative, but immensely so. It stretches to a public debt that has not been lower than 120 percent of official GDP for longer than half of the population has been alive. Inversely, the list also includes achievements of Lebanon never having defaulted on its obligations despite a succession of economic, political, and security shocks (that extended to assassinations of several key personalities) and of monetary inflows that brought banking deposits to a multiple of GDP.

Its curious constellation of economics and politics in locale that qualifies as one of the top global crisis hotspots for the past 70 years means that it is only possible in a most general sense to think of Lebanon as a country that is stepping in the footprints of other countries and populaces that have gone through revolutions. It is certainly not like Egypt, Tunisia, Libya, or any other MENA country. But when thinking about Lebanon’s prospects after October 2019, perhaps some general allusions to the uprisings of the 20th century can give some pointers, namely to the Prague Spring and the May 1968 cultural revolution in Western Europe with its Parisian center.

These two revolutionary chains unfolded and ended very differently from each other in the short term—the Prague Spring was quenched by Warsaw Pact troops and Soviet tanks with blunt force, May ‘68 produced new elections, but not system change, in Paris. Despite its socialist dreams and slogans calling for an overthrow of the capitalist order, there was no change in the political systems in Western Europe and very limited impact on institutions beyond those in tertiary education, nor did ‘68 put the economies of their source countries on new tracks.

Notably on the economic development side, the much bigger shock for economies in Western Europe occurred in the oil crisis and resource shocks of the 1970s—but Western capitalism only reemerged with greater vigor afterward. In Eastern Europe, societies continued to limp behind the West as they followed central planning paradigms of self-declared scientific socialism that was presented by its proponents as a form of technocracy.

The political and economic aspirations of many in the post-war student generation proved to be impossible to achieve. But ’68 had profound cultural and social impacts which, in the reflection of European historian Ian Kershaw, indelibly impacted the minds and perspectives of those who participated. “The anti-authoritarian, egalitarian and libertarian attitudes of the ‘68ers had a lasting impact,” Kershaw affirmed 50 years later.

Also, the seeds of popular will sown in the Prague Spring, growing painfully over time in dissident movements such as Charta 77, contributed at long last in the post-1989 revolutions to the delayed outcomes of liberty for the peoples that had been living behind the Iron Curtain since the end of World War II.

In this sense, the long-term social and cultural impacts of Lebanon 2019 might materialize in advancing and making more resilient the spirit, responsibilities, and freedoms of self-determination that the region excitedly—and in hindsight prematurely—sensed as rising in the Arab Spring, only to see it submerged again in the swirls of regional and geopolitical realities. This is to say that cultural departures from the narrow systems of the patriarchal past might ultimately find their verification and results in the ultra-long term, through changes in the Arab world that are beyond imagination and which could include both political and economic blooming.

The economic bloom could be enormous, considering the long past of unrealized potentials for such increases under existing systems with heavy ceilings of backward business organization, severe political and economic under-participation of women, and social tutelage of vast population groups. This awakening of Arab economies could, at least by today’s standards of capitalist growth, be realized to the tune of significant productivity increases and double-digit growth spurts in utilization of human capital, financial inclusion, economic outputs and—with improved diversity and complexity of Arab economies—mutually beneficial regional trade interactions and integration of Arab countries.

Such long- and ultra-long-term developments would be a boon to Lebanon as an economy with a bridge function and historic networks, not to mention its immensely charged-up young human capital. Yet, it cannot be denied for a second that such propositions of economic and political freedom and prosperity are dreams and hopes with a large dose of pro-Lebanese bias and are—by nature of all economic expectations, hopes, projections, and predictions—speculative with an exponentially increasing degree for uncertainty for each futuristic conjecture. In the long term, it certainly is also a conjecture and one that attempts to deliberately counter both existing international stereotypes and the last five to seven centuries of Arab peoples’ history, to believe that this October uprising could shine 50 years from now as a central ignition point of new cultural and social intercontinentally effective lead roles of enlightened Arab women and men in a less insane global society.

In the immediate outlook for Lebanon there is, of course, more economic uncertainty than one could wish for. The rise of social discrepancies and economic pains for households, the damaging but necessary potentials of controls in the financial sector, the price and inflation spirals to the detriment of consumers and producers, the likely hardships and business risks for importers, the failure prospects of enterprises of all corporate ages, the acceleration of unmitigated public sector problems, and the macro uncertainties can hardly be over-projected.

It is time to fight constructively on all economic fronts.

It, moreover, has to be acknowledged that the local stakeholders in the economy might have little or very little that they realistically can do in the immediate term to steer enterprises away from the cliffs and sandbanks of shallow credit and perilous monetary waters. And as far as betting on grand economic plans by expensive consultants, infrastructure visions that depend on international financial inflows, initiatives with weak institutional and incomplete legislative foundations (e.g. public-private partnerships), and mega-projects (other than, hopefully, the power generation and distribution plan), it appears advisable to take a deep breath and preserve one’s mental energy for just a bit.

Still, it will not be good to abandon all thoughts or send all passions into flight mode. It is time to fight constructively on all economic fronts. In this very important context of economic reforms and ideas for strategizing and talking development, what makes sense from the perspective of Executive is to think, debate, plan, and act in the same way that the October events found their success: inclusively and from the bottom up. We are not relenting to emphasize that the economy, while notoriously non-compliant with expert prescriptions or technocratic central planning, and while often behaving (like the humans that make it) in the most surprising ways, is the people’s action game and arena.

Executive, as another fight that we will not give up on, had one year ago launched a project for an economic roadmap that was distinguished by design: It sought out the inputs of civil society and local stakeholders in wider and more democratic participation than any other view on our future that, in Executive’s humble opinion, is full of our social needs and economic potentials. We call on you, our faithful readers, and on all who invested their heartfelt passions into determining a new future for Lebanon in October 2019, to contribute to the next round of developing a better economic and social future and together build, strategize, combat, and develop new pathways. Take our roadmap forward, improve it. We are ready to do it with you.