Home Retail Behind the times

It’s hard to call it a good year, but staying afloat is good enough for now: This appears to be the general consensus among most luxury watch distributors in Lebanon. Despite the economic slump plaguing many sectors over the past few years, these distributors are powering through the difficult times with business as usual, and hoping for a better 2018.

When the economy and tourism were stable a few years back, sales were higher, thanks especially to tourists from Arab Gulf countries. Today, luxury watch retailers are trying to maintain sales, at best. “Things aren’t moving forward like we hope. It’s been years that it’s a few percent less or more, depending on the brand,” explains Mehr Atamian, managing director of Atamian, the distributors of a long list of brands including IWC, Jaegre-Lecoultre, Officine Panerai, Omega, Tag Heuer, Chopard, Dior, and a host of more affordable brands in their TimeZone boutique.

He says with his company’s current investments, it should be increasing sales by double digits. “Instead, we’re maintaining sales—but at least we’re not slipping backwards,” he says. Atamian says the international brands they distribute are actually happy with their sales because their numbers are stable, pointing out that even markets like Dubai and Saudi Arabia have seen a drop in sales in recent years. “They see Lebanon still performing—we’re a tiny country compared to those, but we still rank among 4th or 5th in terms of turnover, if you compare each brand regionally,” he says.

So who is buying watches? Watch collectors, for one. “The trend that we have been noticing in the high-end watch industry leans towards value-for-money purchases,” says Pamela Kassouf, a brand manager at Holdal, a luxury-goods distributor. “Watch collectors will always opt for the special pieces.” Holdal owns the Cadrans multi-brand store, as well as brands like Patek Phillipe, A. Lange & Söhne, and Vacheron Constantin. He adds that there are clients who buy regular catalog items, but that these purchases are slowing, given the slow tourism in the country. Atamian says a lot of spending comes from expatriates—especially Lebanese working in Africa and the Gulf—who come back to visit family in Lebanon and buy gifts.

Ziad Annan, CEO of A&S Chronora, the official retailer of Rolex and Tudor, says the company’s sales have been steady this year compared to other years, and points out that the brands also deserve credit. About Rolex, he says, “We’re lucky to represent a solid [luxury] brand in Lebanon … despite the unpredictable political and economic situation.” Chronora offers Rolex clients a 0 percent financing payment facility in collaboration with BankMed—a nod to tough times—but the company does not disclose how many clients have made use of the offer.

Simone Tamer, chief commercial officer of Tamer Freres, works with Audemars Piguet, Omega, Breitling, Bomberg, Mont Blanc, Hublot, Swatch, and Flik Flak, describes the situation of the past few months as very hard, but the company’s long list of recent activities shows it is persevering, and it is expecting better sales in the next year.

The retailers Executive spoke to said they offer most of the range of each of their brands. Tamer says Tamer Freres carries their brands’ entire collections; Chornora says its Rolex collection is widely represented in Lebanon, but that it can also order specific timepieces in case something is out of stock.

Atamian says his company carries about 80 percent of its brands’ collections, pointing out it’s not practical to carry everything because some watches are tailored to certain tastes that may not sell locally. “Brands cater to the whole world, so they produce watches thinking about all the major markets. For example, China is the most important market for all brands now, and they like smaller watches in China, so brands are producing small watches,” he says. Lebanon’s market has a more European taste. He adds that big luxury brands don’t change models often, but have additions to existing families or limited editions.

Retailers with mono-brand stores get special boutique-edition models that other retailers don’t sell, encouraging them to open flagship stores for individual brands. “The brands need to give incentives to open boutiques because they’re costly,” Atamian says, adding that these pieces are highly sought after by collectors.

Kassouf says the latest trends across Holdal’s brands vary widely, but there is a general tendency towards classical models, vintage designs, as well as big dials and more lightweight materials. Other trends in watch materials include the use of a lot of steel, he says, with the exception of A. Lange & Söhne, which only uses precious materials, with a focus on white gold. One brand, Richard Mille, uses NTPT, or “thin-ply” technology, to create strong, lightweight carbon.

Kassouf say customers are looking for more flexibility, too. “Brands are offering different color and strap options and styles to render the watch adaptable to different lifestyles. For example, Vacheron Constantin is concentrating on the Overseas model, a watch that comes with three interchangeable straps and bracelets made of steel, rubber, and Mississippian alligator leather,” she explains.

Brands are launching increasingly innovative products to please customers, too. This year, Tamer Frere brought Montblanc’s Summit smartwatch to Lebanon. Collaborations are popular too, like the Hublot Ferrari collection that debuted in April.

Regardless of sales, companies were busy as ever with events, openings, and other activities to keep business going. Several brands opened retail space in the new ABC Verdun, which now contains a  Montblanc store from Tamer Frere, and new Atamian and TimeZone boutiques. According to Atamian, this is opening doors to a wider market, and his company is receiving many first-time customers.

A&S Chronora launched a new brand identity earlier in 2017, which includes a new logo, website and a CSR focus on preserving architectural culture and heritage in Lebanon, including the building in Downtown where its current boutique is located.

With luxury watches, client-retailer relations don’t end after a sale is made. Many watch-buyers are collectors who are constantly on the lookout for new models to add to their collections, so brands often coax them with VIP activities such as master classes, workshops, trips and dinners. For Holdal, after a series of flagship single-brand boutique openings in Downtown in 2016 (including A. Lange & Söhne, Patek Philippe, Richard Mille, and Vacheron Constantin), 2017 was more about private events focusing on VIP clients. This year, they organized two private visits to watchmaking facilities in Europe: the A. Lange & Söhne factory in Dresden, Germany in September, and  the Patek Philippe Museum and factorymanufacture in Geneva, Switzerland, in October.

Atamian invited special guests to a dinner with Panarai at the Beirut Yacht Club, and with German brand Glashutte to Barbizon. Atamian is also partners with the Beirut Art Fair, and it hosted an artist and welcomed guests in front of its boutique during the inaugural walking tour of Beirut Art Week. Atamian says these events are all necessary as part of a 360-degree advertising strategy that includes digital and social-media campaigns, and special events. “We’re trying to cover everything. We have to,” he says.

Tamer Freres received members of the board of directors of Audemars Piguet, as well as the influential magazine Watch Anish this year. They also had a special celebration in April for the 30-year anniversary of the children’s watch, Flik Flak.

Luxury watches also need to be serviced. Many brands are offering this service now from Beirut. This year, Tamer launched a new certified after-sales service in Lebanon for Audemars Piguet, so clients can get their timepieces serviced locally by certified professionals, instead of waiting for them to be shipped to service centers abroad.

Tamer says he had planned several events in 2017 that had to be postponed. “We’re hoping that 2018 will allow us to invest in activities like the ones happening all over the world,” she says. Atamian is renovating their Longines and Tag Heuer boutiques in Beirut Souks. In the next year, Chronora has plans to modernize Rolex Downtown and Jounieh with new furniture coming from the Rolex headquarters, and to relocate its headquarters closer to its flagship store in Downtown, on Rue Foch. It also has a major Rolex event planned for late spring. Kassouf says there will be events in 2018, but reveals only that they are striving to provide customers with true, high-end watches experiences. 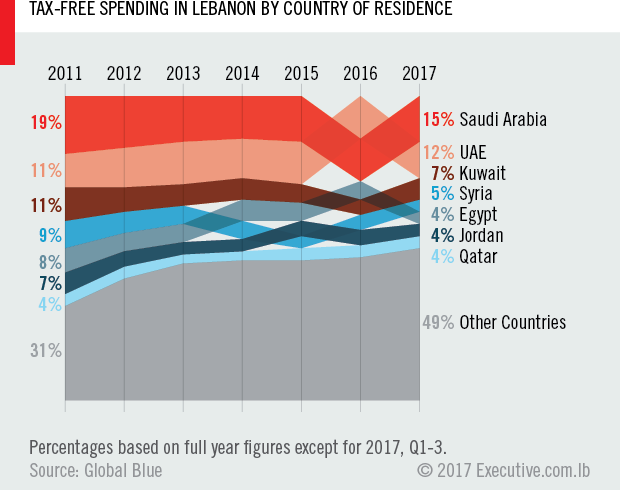 The rock and the magic beanstalk

The long journey of a large retailer