2. Akkar Manna Mazbale (Akkar is Not a Dumpster)

Akkar Manna Mazbale (Akkar is not a Dumpster) was formed with a very specific goal in mind: do not let Akkar turn into a dumping ground for Beirut and Mount Lebanon’s garbage. Akkar is located in northeast Lebanon, more than 100 kilometers from Beirut, on the border with Syria. It is one of the most impoverished areas of the country, with average poverty rates of 63 percent, according to a 2008 UNDP report. Government investment in the area is far from sufficient, and people there often feel abandoned by the state, which is why Agriculture Minister Akram Chehayeb’s recent plan to transport waste from Beirut to an open dump in Akkar has only added insult to injury for many folk there. The area does already have at least one open dump in Srar where garbage from various areas of North Lebanon is disposed of. However, the thought of becoming the next Naameh is not welcome by the residents of Akkar, and a group of them were enraged enough to start an activist group to campaign against this issue. Executive spoke to Elie Keldany, a local development NGO worker and activist with Akkar Manna Mazbale, to find out more about the group’s activities and vision.

Keldany himself initially became active with the You Stink group in mid July to protest the Beirut and Mount Lebanon garbage crisis. As soon as rumours started emerging that groundwork was being prepared to create a sanitary landfill for Beirut’s trash in Akkar, Keldany joined forces with youth groups in the area to start organizing on the ground. They created a Facebook page and began with a street protest in Akkar on August 25 which attracted about 200 people, according to Keldany. The protest coincided with a government meeting in which $100 million was promised to Akkar municipalities for new development projects in exchange for the region providing land to be used as a dumping ground. While some key members such as Keldany continued to attend the subsequent protests in Beirut as well as those in Akkar, many of them just stayed in Akkar and organised regular popular protests there with the local community. Keldany admits that such organizing is not easy because the local municipalities there, he says, are on the side of the government rather than with the people of Akkar for “financial as well as political reasons.” As such, the group has to work independently, winning the hearts and minds of local residents through awareness raising campaigns and popular direct actions. 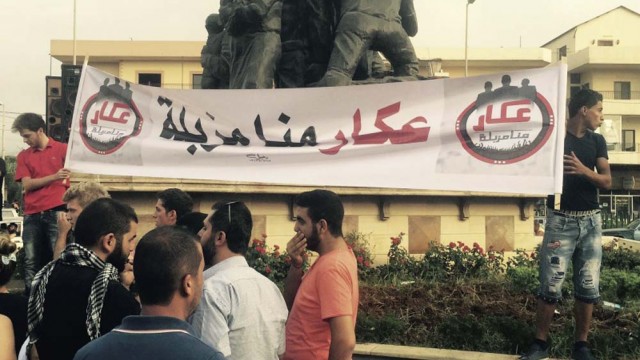 Since many residents of Akkar generally have more pressing concerns than waste related issues such as recycling, Akkar Manna Mazbale had to push forward with a concerted effort of spreading information which eventually got people, for the first time in a long time, onto the streets to protest the proposed “solution” to the garbage crisis. However, Keldany stressed that it is pivotal to keep the group’s goal clear and simple, and not to deviate into setting broader political demands that could potentially put off the residents of Akkar who, for ideological reasons, he says, might not necessarily be keen to see the current system “toppled”, as many of the chants in Downtown Beirut have echoed. Due to lack of development and employment opportunities in Akkar, many young men from the region join the army, which is also why delving into deeper questions of politics and the state is perceived as a sensitive issue best kept for another time. While Keldany himself does personally agree with the more general demands put forward by the bigger groups such as You Stink, he nonetheless makes clear that he always does so under the You Stink slogan and not under the Akkar Manna Mazbale one. Whenever Akkar Manna Mazbale is present at the Beirut protests, it is purely to have Akkar represented there and to put forward the group’s one main demand, with care to stay clear of participating in any anti-government chants. So, naturally, when asked if the group has a political or economic vision for Lebanon’s future, Keldany insists that this would go beyond the scope of the group’s so far limited campaign goals and aspirations. For now, the core issue for them is the garbage crisis, and engaging and informing the local community while simultaneously putting pressure on politicians is, believes Keldany, the way to go about solving it.

The group has no hierarchy or leadership, but operates instead in circular fashion with each member assigned a particular role, such as that of media coordinator. When asked about the group’s funding and expenses, Keldany insists they have not reached a stage yet where they need any funding. As such, they have neither sought nor received any funding and do not plan to in the near future. Instead, they have chosen to cover their own expenses for materials such as leaflets or posters. The group is not the only one present in Akkar, but it coordinates with the other organizations and environmental activists there to plan on-the-ground actions that will try to physically prevent Beirut’s garbage from entering the area. 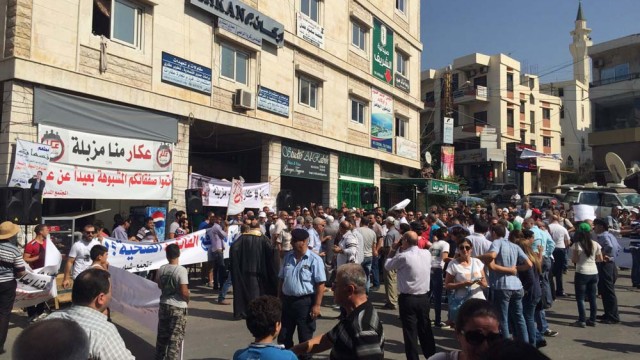 While Keldany admits the group doesn’t have the funds or expertise to write up its own studies or a detailed alternative plan to that proposed by the government, he stresses his own involvement over many years in local development and is trying to blend this work with the current protests to broaden the scope and sustainability of his group’s activism in Akkar. A large part of this development work involves pushing for more government investment in ecotourism projects such as fixing up the natural reserves and wild forests found in the area. In line with Akkar Manna Mazbale’s primary aim to keep Beirut’s garbage away, the group is taking advantage of the current media attention to show the country a different, rarely seen image of the region. As Keldany says, “We [Akkar Manna Mazbale] are trying to convey the message that we want an Akkar with ecotourism, not garbage.”