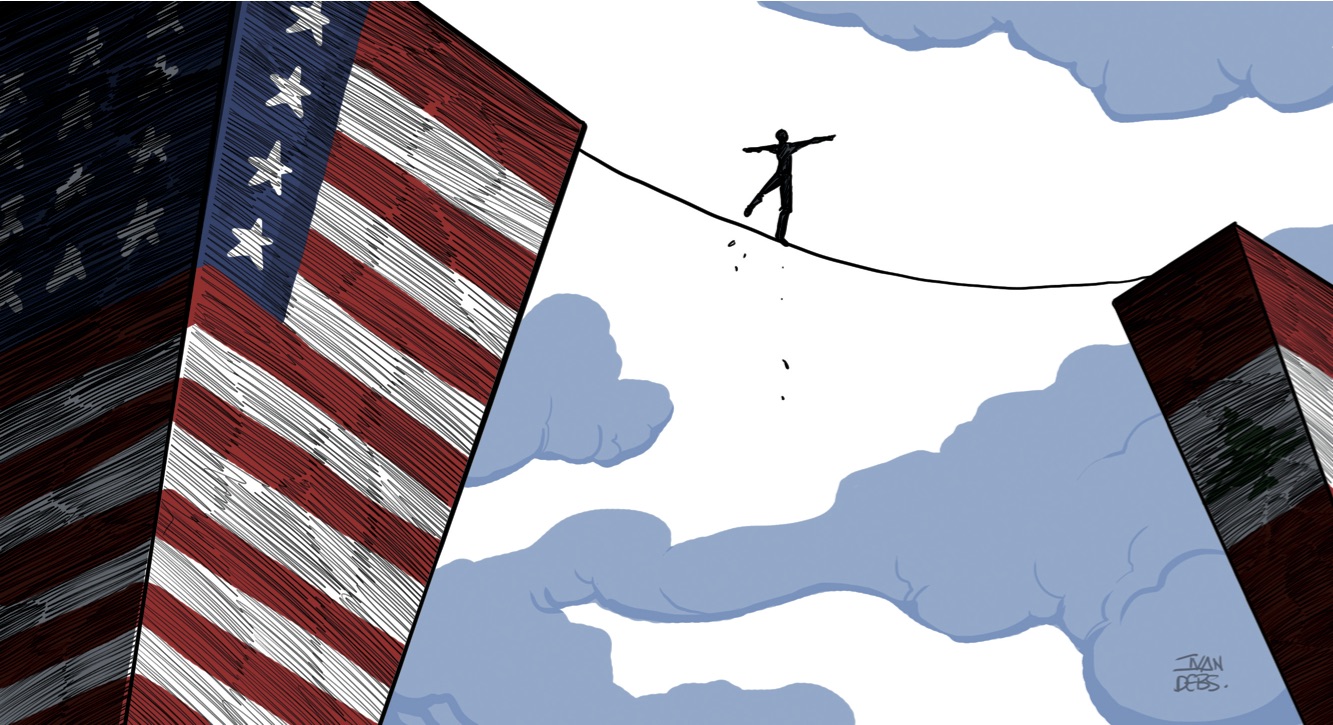 “Part II of this legislation is coming”, US House of Representatives Foreign Affairs Committee Chairman Ed Royce said in his opening statement at a committee hearing entitled “Attacking Hezbollah’s Financial Network: Policy Options.” The United States alleges the Party of God is a global crime syndicate and has designated Hezbollah as a terrorist organization. The hearing, held June 8, comes on the heels of Lebanese media speculation that the United States was already drafting new legislation intended to strangle Hezbollah’s finances, rumors local government and banking officials downplayed Executive reported in the June print issue.

After weeks of media speculation, in May Lebanese officials moved to downplay the possibility that new American legislation would expand the scope of sanctions targeting Hezbollah’s finances. Rumors circulating in the Lebanese press since mid-April alleged that the US Congress was quickly drafting a new law that would tighten the noose on Hezbollah and its affiliates’ ability to use banks.

According to multiple sources from the Lebanese banking community, and from statements and media reports following trips to Washington by MPs and the Association of Banks in Lebanon (ABL), at the moment any talk of legislation is just that — talk. American officials, however, remain mum.

While media reports may have jumped the gun on the prospect of imminent new legislation, there is no denying that there is a draft bill circling through the corridors of Washington D.C.

A senior official at Lebanon’s central bank told Executive that there “is a draft bill, and we all have copies of this draft. That is serious. What is not true is names. There are parties: Hezbollah, Amal and associates yes, but no names. There is no bill yet, but there is a draft of the bill.”

Returning from their trip to the United States, the ABL confirmed the existence of a draft bill and their opposition to it. In meetings with US officials from Congress, the State Department, the Treasury and the National Security Council, the ABL “made observations on the text of the proposed law and on the negative effects that may ensue and join Lebanon and banking activities in it. The delegation insisted that the current legislation in force is sufficient, thus eliminating the need for any new provisions that may leave inappropriate interpretations,” according to a May 22  press release.

The ABL has lobbied US officials and its American banking counterparts for years. According to disclosure documents compiled by opensecrets.org, a research group tracking money in US politics, from 2013 through April 2017 the ABL spent just over $3 million lobbying US officials on Lebanese banking concerns, including $1.8 million attempting to water down last year’s Hezbollah International Financing Prevention Act (HIFPA).

Lebanon’s Parliament dispatched its own delegation to Washington in mid-May. “Everyone is speaking in Lebanon as if there is a new US sanctions law targeting Lebanon that has been issued, and this is a big fallacy because it has not happened yet,” MP Yassin Jaber told al Joumhouria on May 23. According to Jaber, there was a committee in Congress drafting a bill, the draft was leaked, and the result was an explosion of rumors that reverberated through the Lebanese press. (Jaber did not respond to multiple requests for comment).

Abdul Hafiz Mansour, secretary general of the Special Investigation Commission (SIC) at the central bank, downplayed the possibility that the Americans will introduce new legislation targeting Hezbollah’s finances. He says local media “was [reporting] the news as if it were a fact that the United States was expanding the radius of its sanctions, or targeting individuals or parties.” Mansour dispelled these reports as unsubstantiated, though he did acknowledge that US authorities were discussing new legislation (or amending HIFPA), with the addendum that these talks had not yet reached serious levels.

Confidence in the toilet

The attempt by Lebanese officials to downplay the threat of new legislation is understandable. The mere talk of further sanctions has shaken faith in Lebanese banks, and local officials say any new legislation would crush confidence in the banking system, disrupting the country’s economy in the process.

Around 100 individuals and entities were sanctioned by the United States following the April 2016 implementation of HIFPA. The SIC, which acts as Lebanon’s financial intelligence unit (FIU), would not disclose the aggregate number of accounts that were closed, citing banking secrecy. But a senior international monetary official told Executive in December that the legislation probably had little effect on Hezbollah’s finances but had a large impact on confidence in the banking sector.

Regarding media reports about new American legislation, the head of compliance at one of Lebanon’s Alpha banks said that if the rumors of new sanctions  were true, the “impact would not be good, because we are talking about psychological effects.”

And the senior official at Lebanon’s central bank told Executive that a consequence of a new law could be de-risking, a unilateral severing of banking relations. “That’s the worst, the de-risking potential. And what really scares me is banks and central banks chickening out. When you’re hit with sanction after sanction they begin to ask, ‘Why should we do business with Lebanese banks?’”

Mansour told Executive a similar story, that following last year’s local implementation of HIFPA the number of accounts that local banks closed was not significant, but confidence was affected, adding that rumors of fresh legislation have reminded the banking community of this uncertainty. “There is conscientiousness from everybody because of the rumors, but it has not culminated into something like de-risking actions.”

However, to outside observers, it might be hard to recognize the integrity of Lebanon’s financial system and the rules that govern it. To them the core may be intact, but the rest of the apple looks rotten.

According to the 2016 Basel AML Index, compiled by the Basel Institute of Governance at the University of Basel, Lebanon is not doing so well when considering its AML/CTF rules in concert with its perceived corruption rating and the weakness of its judiciary. The Basel Index ranks Lebanon as second worst in the Middle East, behind only Iran, and 28th worst out of all 149 countries. The index measures “AML/CFT systems combined with structural and functional vulnerabilities, such as high rates of perceived corruption, weak judicial systems and inadequate financial sector standards.” Though it also states that, “it is important however to note that the fact that these countries are placed higher in the risk-rating category does not necessarily mean that they can automatically be considered as attractive destinations for money launderers. It only means that the country has a heightened vulnerability to money laundering due to shortcomings in their AML systems as assessed by international standards.”

To tackle these gaps, Lebanon created a ministerial portfolio to target corruption ­— but it is unclear what its objectives are or what, if anything, has been accomplished so far. The country is consistently perceived as corrupt, according to global watchdog Transparency International, and in early 2017 the International Commission of Jurists called on Lebanon to extensively reform its judiciary to ensure its full independence, concluding, “Measures must be taken to ensure that the judiciary is not subject to any form of undue influence by political actors and confessional communities, and that it is able to fulfill its responsibility to uphold the rule of law.”

Stateside, talk of new legislation is seemingly less about money laundering concerns and more about politics. HIFPA is a continuation of the United States’ war on terrorism, an American policy that dates back to the Bush administration. Its passage was a consequence of the P5+1 nuclear agreement with Iran and the lifting of sanctions on the Islamic Republic. Those opposing the Iran deal feared the removal of sanctions would allow Iran to float more money and aid to Hezbollah and other proxies in the region.

The United States might be honing its pursuit of Hezbollah’s finances, after last year’s HIFPA law seemingly had little practical effect. According to SIC’s 2016 annual report, Lebanon’s FIU received 470 cases related to money laundering or terrorism financing, 107 of which were referred by foreign sources. This was only a small uptick in referred cases from 2015, despite Lebanese banks’ compliance last year with HIFPA and additional local regulations.

But Ibrahim Warde, an expert on terrorism financing at Tufts University, points out that there is not yet a clear strategy from the White House with regards to Middle East policy. “There’s a great deal of confusion within the administration, but one must also contend with Trump’s impulsive instincts,” Warde wrote to Executive in an email. The future of American policy may have been partially revealed during Trump’s visit to the region in mid-May. In a speech in Riyadh, the US president praised Gulf countries for “blocking funders from using their countries as a financial base for terror and for designating Hezbollah as a terrorist organization.”

In justifying the HIFPA legislation, the Americans alleged that Hezbollah is a key player in global narcotics trafficking and money laundering networks, charges that Hezbollah vehemently denied. According to the US State Department’s 2016 International Narcotics Control Strategy Report, Lebanon is among 65 nations considered a “jurisdiction of primary concern” for money laundering and financial crimes. In explaining this designation, the department noted, “Lebanon faces money laundering and terrorism financing challenges. Domestically, there is a black market for cigarettes, cars, counterfeit consumer goods, pirated software, CDs and DVDs.” However, the report notes that “the sale of these goods does not generate significant proceeds that are laundered through the formal banking system,” adding, “the domestic illicit narcotics trade is not a principal source of laundered proceeds.”

What the Americans might be attempting to do is influence Hezbollah by leveraging the banking sector. “This is the spirit of HIFPA and this is what [the Americans] want, but the outcome of this is very debatable. Regarding the effects of the sanctions imposed by the US on Hezbollah, some say they haven’t been affected, but that it’s affecting poor people of the [Shia] community. It may be putting pressure on some in the party to change their behavior,” says the commercial bank compliance chief.

Out on a wire

The recent reappointment of Riad Salameh as governor of the central bank might boost Lebanon’s ability to negotiate or head off proposed American legislation. But as the Trump administration’s Middle East policy evolves, particularly its effort to isolate Iran, Salameh alone cannot save Lebanon. Hezbollah has acted unilaterally in Syria’s civil war while the official stance of the Lebanese government continues to be one of disassociation. And along Lebanon’s southern border, Hezbollah continues to possess the means to threaten Israel.

There does seem to have been an acceptance on the Americans’ part that they should not disrupt the Lebanese economy by cutting off local banks from the global financial system. And the banking community’s message to US lawmakers, when related to Hezbollah, seems to be that if you cut off Lebanese banks, you give the country to Hezbollah and Iran. But there are different tactics at play. The United States is applying the bullying strategy: Do as we say, or else. Lebanon’s part is to roll over like a good little doggy: We know you don’t mean what you say, you’re nice and we’re nice so don’t confront us. But the notion that the Americans are not contemplating something serious is hard to buy, and the worry with Trump is that he seems willing to push the envelope further than previous administrations, and in unpredictable ways.

Where does that leave Lebanon? The banking system is the pillar of the economy, and so it begs the question of Lebanon’s political class: Is blowing up the country’s banking sector worth the price of resistance?