As old as Byblos

Many essential parts of life that we perceive as “can’t do without” are quite recent. Inventions such as the elevator, motor car, air conditioning units, frozen food and of course the dreaded smartphone are between 150 and 15 years of age, at least in their modern mechanized/electronic versions, even as the ideas behind them date back 10 or 20 centuries.

Wellness is an essential living concept that has been around for even longer; Indian and Chinese recipes for making the body and mind unite in a healthy and mutually enriching relationship have a history of up to five millennia. According to the Global Wellness Institute (GWI), Ayurveda and traditional Chinese medicinal treatments have been around since 3,000 years before our Common Era or before Christ (BC), and ancient Greek and Roman therapists began practicing wellness in the fifth and first centuries BC, respectively. That sounds almost as old as Byblos, the pre-Phoenician port that we celebrate as Lebanon’s (and one of the world’s) oldest continuously inhabited city.

[pullquote]“You have trendy words in Lebanon, like detox, which is very fashionable, you have gluten-free, which is trendy, and wellness is now becoming trendy as well”[/pullquote]

Wellness as a consolidated, marketing-savvy international industry by contrast is a new trend – young in global terms and just emerging in these parts of the world. It is even young compared with the first smartphones such as the Communicator by Nokia, the BlackBerry, Japan’s DoCoMo and the first iPhone generation, which were all born in the 1990s or later. A Global Wellness Summit as the precursor of GWI was incorporated ten years ago and its International Wellness Day was celebrated for the first time in 2012 in some countries and last month at the Edde Sands Resort in Lebanon.

“We decided to focus on this global wellness day because it is celebrated throughout the world on the second Saturday in June. You have trendy words in Lebanon, like detox, which is very fashionable, you have gluten-free, which is trendy, and wellness is now becoming trendy as well,” says Alice Edde, co-founder of the resort with her husband Roger. 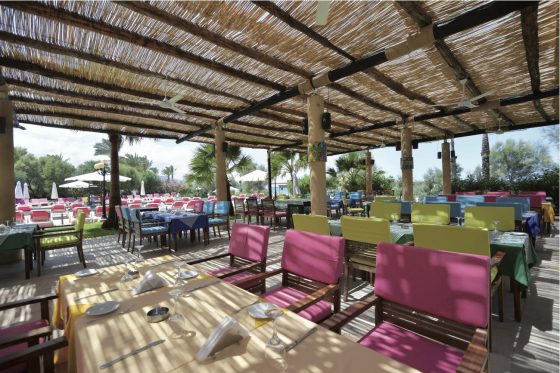 Edde has organized wellness weeks at Edde Sands since 2009. During the past few years her resort has morphed from a top address for summer partying and weddings to a place that is in equal proportions oriented towards weekend relaxation seekers and revelers between May and October and to wellness in the rest of the year. “We started off as a party destination and now we have become a wellness destination and a place for children,” Edde says. This is reflected in the brand, which has expanded its name to Edde Sands Hotel and Wellness Resort.

For this year’s wellness day the resort invited advisors on issues such as nutrition or pediatrics, and even an optometrist and a life coach to set up booths where they explained to visitors why wellness is important. The exposure was so convincing that a member of the Executive editorial team decided on the spot to make another try at kicking his cigarette habit.

According to Edde, the occasion was also able to attract two relevant ministries. “We got the minister of health interested in this and the minister of tourism, so we had both their logos on our flyers because they are backing us. This is important for Lebanon. It is a form of diversification of tourism; you have religious tourism, wine tourism, rural tourism and now wellness tourism,” Edde says.

Unsurprisingly, international wellness advocates and operators are full of cheer for the potential of all things wellness with market assessments that speak of trillions of dollars, not just billions. The numbers come from research conducted in 2014 by GWI and it is a reasonable expectation that they are self-serving and possibly exaggerated. They nonetheless leave little doubt that wellness is a sizeable business realm. In GWI’s view, the three largest elements of the wellness market are beauty and anti-aging, worth $1.03 trillion worldwide, followed by healthy eating and weight loss ($574 billion) and wellness tourism, worth a supposed $496 billion. In total, comprising hundreds of billions of additional dollars in sectors ranging from fitness, alternative medicine and lifestyle to wellness real estate and workplace wellness, the sector’s advocates see a global market of $3.4 trillion.

As a wellness destination, Edde Sands on this Saturday in June mobilizes all the offerings – except crowds, that is. Attractions like Zumba, dance and aerobics exercises performed to energetic music, runs at noon in fitness studios, at 2 pm water gymnastics are held in the pool and at 6 pm there is yoga.

At the large lunch table for invited guests and celebrities, a three-course wellness meal with greens, fruits, fish filet or veggie burgers and healthy sweets is served in a relaxed and tasty fashion. This is framed by the resort’s calm and easygoing atmosphere where one can sit back and let the soul wander, taking a break from thinking about waste management or other political issues of the day. All evidence suggests that the visitor moreover doesn’t have to worry about looking the part of either the proverbial Aphrodite or Adonis to fit in and be accepted (Adonis and Aphrodite are present, though, but as monikers to denote the facilities.) Although it has strong ties to physical attractiveness, or the longing for it, a wellness seeker here does not have to obsess over fitness and body-shape stereotypes, or particular practices that have come up during the last 100 years of the wellness movement – such as radical vegans, preachers of various abstinences, and prophets of New Age and alternative medicine – that have the tendency to turn into quasi-religions. 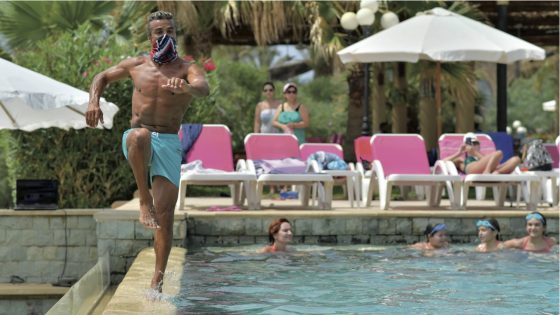 The look taken by the Edde Sands team is undogmatic. The week-long program is adjusted to local habits, where discipline is not a prominent pattern and food proscriptions aren’t extreme. “Wellness food is not just about dieting. There are so many body types and we prepare our meals to be in line with people’s real needs,” explains Yara Younes, who oversees the wellness operation at Edde Sands.

The number of people who attend this first wellness day celebration at the resort is not large (Ramadan always makes a dent here) but also not impossibly small. The event, according to Edde, aims to give people a taste for wellness whereas wellness week is a serious endeavor during which “you spend nights and you come with a goal like relaxing, or doing detox or losing weight.”

Such self-improvement goals have a cost. A full stay during wellness week will set a participant’s purse back over $1,600, according to Younes. Attendance of a wellness week depends on the season but participation ranges anywhere between 15 and 40 regulars. “What we have seen over the past few years is that there is a greater awareness of the health benefits of retreats, and those that try our wellness week once tend to become regular clients. This has created a large wellness database,” Younes enthuses, adding, “Our maximum capacity is 25 full-week clients. We prefer providing customized attention and personalized service for a better client experience.”

As Alice Edde acknowledges, a stay in a European wellness hotel will be less pricy than at the resort. She argues that this is because of specializations in Europe where an entire branch of the hospitality industry has already focused on this theme for a long time in countries like Austria, Czech Republic (where the famous Karlovy Vary spa town was established in the 14th century and named after Emperor Charles IV) or Germany. Booking a wellness week at Edde Sands on the other hand is not expensive when compared with a conventional stay at a five-star hotel in Lebanon. “It is not cheap but relatively speaking, it is very reasonable,” Eddie claims. 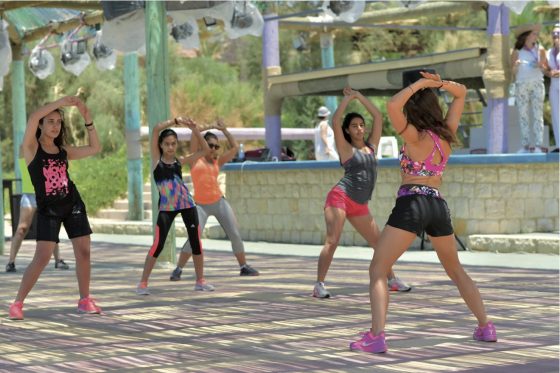 According to Edde Sands marketing manager Nathalie Maljian, the property has two hotels with a current capacity of over 50 rooms and suites, which was developed between 2006 and 2016. The average room rate is $376 and $92 in the high and low seasons respectively, with an occupancy rate at the hotels of 60 percent.

Younes says it is difficult to compare the package cost of a stay during wellness week with an average week during the low season. Including stay, meals, resort entry and various activities, the cost will be $1,627, which can grow higher by purchasing other options. This is juxtaposed with a $825 fee for six days of accommodations alone, in addition to which guests would have to buy meals ($35 for each meal) and treatments for between $15 and $145 each. A single-day complete participation in the wellness program sells for $195, she adds. It is unmistakable, however: a bargain proposition for backpackers, wellness week is not.

For the next wellness week in October 2016 Younes expects to boost revenue by 30 percent from the previous year. In measures to support economic performance, her targets include attracting a younger clientele and benefiting from new partnerships, such as “a collaborative relationship with the AUB Wellness Center and the AUB Nature Conservation Center”, details of which are to be determined in the latter part of the year.

Alice Edde’s strategy is to develop Edde Sands as a wellness destination in equal parts for domestic and foreign clienteles. She sees wellness tourism as a growth trend with increasing numbers of institutions and operators, like small hotels in the countryside and bed & breakfasts, joining the ranks. “This will be the tourism of the next ten years,” she says confidently. 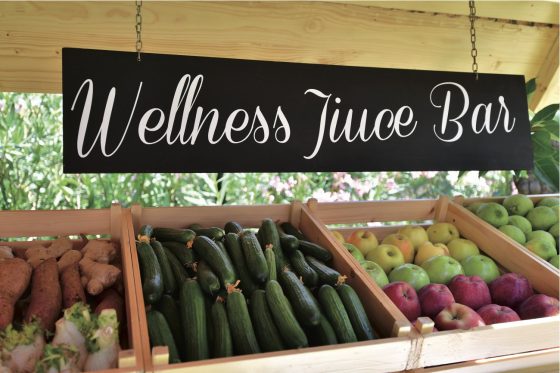 For this upscale resort that has been standing its ground in the challenging Lebanese hospitality landscape for more than ten years now, wellness is a promise to reinvent and upgrade itself in a maturing market. However, while wellness tourism has the potential of contributing to the diversification of tourism in Lebanon and could tie in with other specialties such as medical tourism, this potential will be lessened if known deficiencies in areas such as political stability, infrastructure and security are not addressed. “In their absence, the growth rate will be impeded, but we won’t stop. We believe in what we are doing and we think it is the future,” Edde says. For her, wellness is more than business, she professes with a smile: “It is a lifestyle.”

The franchisor and the direct operators

The rocky road from inventor to businessman