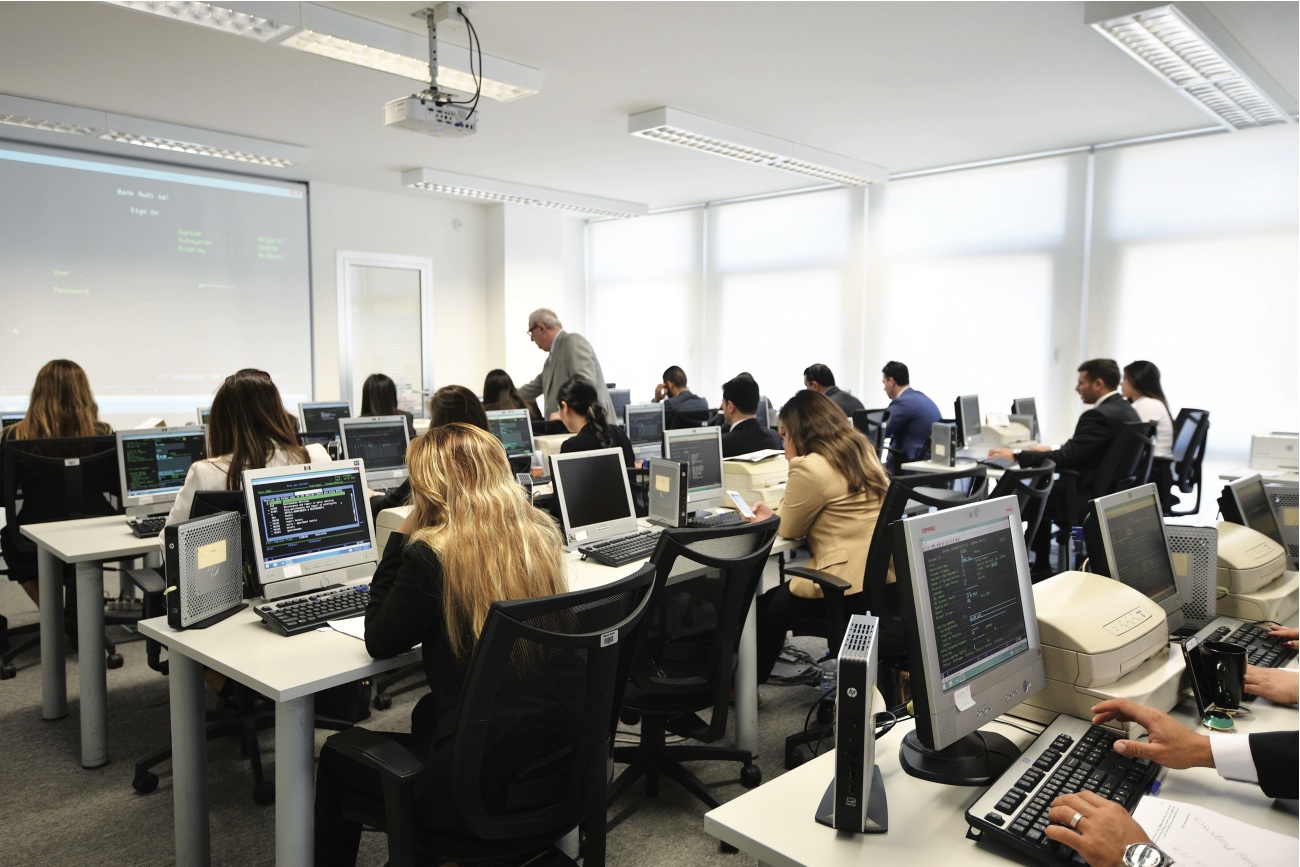 Besides having to dispatch their staff to rigorous regular training programs required under central bank stipulations, banks provide employees with a variety of opportunities to participate in continuous education. Training extends from honing soft skills to mandated skill checks, acquisition of professional certifications and pursuit of academic degrees. Executive spoke to five banks about how they approach the issue.

Each of these banks provided Executive with similar figures, stating that their training budgets represent 1 or 2 percent of their payroll and reporting between 20 and 30 average annual training hours per employee. But the breadth of approaches, offerings, and perspectives on the benefits of training show that both job seekers and banks would do well to give training and educational support as much attention as their remuneration packages.

Bank Audi’s training portfolio represents one of the most advanced and diverse educational support programs in the country. The long-standing employee qualification policy with regard to MBA degrees gives employees a chance to pursue a master’s degree in Lebanon or even at a university abroad. It is part of the policy to sponsor attainment of a master’s degree without regardless of the need for such a degree in the employee’s current position at the bank.

“Everybody has [an] equal opportunity to apply for a masters. The bank fully covers [the tuition cost] of any employee who would like to do a masters. Whereas other institutions might look [to see] if the [employee’s] position needs a masters, we don’t. We say that the person needs the masters and will give more [to the bank] afterwards,” says Nayiri Manoukian, head of human resources at Bank Audi.

Manoukian says that training and continuous education involve all of the bank’s departments, even under a tightened budget. She claims that an employee request to pursue further education might be deferred for one year if the budget does not allow for it immediately, but the bank’s HR department never says no to an educational pursuit, while possessing a clear preference for quality universities.

Bank Audi’s broader training for staff includes a laboratory where new hires can go through a sandbox-style simulation of branch environments; an in-house academy for employees, with required courses for aspirants to specific career positions; a corporate academy; two-day manager training on an annual basis; and its latest addition, a year-long advanced management program carried out in collaboration with the American University of Beirut.

According to Manoukian, the depth of Bank Audi’s commitment is captured by the following numbers: The yearly training budget represents 2 percent of total HR expenses and 1 percent of total operating expenses, with employees logging between 110,000 and 115,000 training hours per year.

“We encourage our employees to pursue higher education, mainly in Lebanon,” says Pierre Abou Ezze, head of human resources at BLOM Bank. He tells Executive that some 125 staff members of the bank’s 2,500 workforce are currently pursuing master’s degrees, and explains that BLOM finances these studies to 50 percent, 75 percent, or even 100 percent, with the extent of the sponsorship determined by the university’s international academic ranking.

Sponsorship is tied to a commitment to stay with the bank for five years after graduation, otherwise, all or part of the tuition has to be paid back to the bank. Tuition investment is amortized to 20 percent each year, meaning an employee who leaves after one year would be obliged to pay back 80 percent of the tuition, and after five years, would be free of degree-related obligations. On a broader level, Abou Ezze says that the average number of training hours per employee in 2016 was 23. He says that BLOM staff are a frequent target of headhunting by other banks, due to the bank’s provision of strong continued education. On the other hand, training also serves as a tool for winning employees’ loyalty. “The way we are trying to retain our employees is that we train them well and offer them competitive packages,” Abou Ezze says.

At Byblos Bank Group, the practice of MBA sponsorship also exists, but on slightly different terms. According to head of human resources Fadi Hayek, the bank selects high achievers to participate in an MBA program at several well-reputed universities in Lebanon, such as AUB, Lebanese American University (LAU), Université Saint-Joseph (USJ) and Ecole Supérieure des Affaires (ESA). Between five and eight employees every year can pursue an MBA, and the bank covers their tuition up to 80 percent, with funding tied to work retention commitments and an amortization period of five years after completion of the MBA.

According to Hayek, Byblos Bank also selectively sponsors employees for qualifications such as Certified Public Accountant (CPA) or Chartered Financial Analyst (CFA) if these skills contribute to their fulfilling a job requirement. For example, someone working in the finance department might be approved for a sponsored CPA qualification program, while someone working at a branch might not. However, the bank does allow time for branch employees to pursue additional qualifications. Hayek says that the average annual training time per employee is 2.8 to three days (equivalent to 22-25 training hours per year).

Credit Libanais Training and Development Manager Bassam Nammour explains that the bank operates with a regimented [training] budget. The budget is set at the beginning of every year and divided into sections, including external, in-house and overseas training. It also entails provisions for career management training, a resource library and extras related to training. “We have an e-learning system that we developed [further] this year to also facilitate mobile learning and introduce the gamification concept to the learning atmosphere in general,” Nammour says.

Training hours at Credit Libanais are subdivided into several categories, such as classroom, e-learning, overseas and executive training. According to Nammour, the average number of training hours per employee is 40 to 50 per year, when including e-learning. Without e-learning, he says that the average training commitment stands between 20 and 30 hours. “We try to focus courses as much as we can — having 30 hours of focused training is much better than having 100 hours without focusing,” he adds.

He explains that Credit Libanais’ approach to financing master’s programs is different from that of other banks, driven by the observation that elsewhere around 40 percent of the sponsorship recipients move on from their bank within two years of graduation. “The point at Credit Libanais is that we don’t sponsor the education of employees, but we encourage it with an emphasis on certifications. Upon success, we pay employees the fees for the certifications. Concerning MBAs, we provide employees with loans at zero interest so that they can further their education,” Nammour says.

Banque Misr Liban is engaged in an expansion strategy. According to human resources head Rabih Joumaa, the bank’s growth is reflected in the increase in the number of employees, from 248 in 2011, to 359 as of the end of April 2017. In this context, the bank has sought to lower HR turnover and, as part of its strategy to retain employees, has massively expanded its training budget, which has more than tripled in each of the last few years. The number of training hours per employee grew 50 percent between 2015 and 2016. Employee feedback is incorporated into the design of training   in each department. The range of offerings includes team building activities and courses on leadership, communication skills, and business etiquette.

“Any employee can, at any time, contact HR and register to attend a training [course] under an automated process,” Joumaa explains, adding that the benefits of the bank’s availability of training enhances cultural buy-in, so that all employees share the same vision and speak the same language. “It made our task easier to enhance the culture and communication among the employees, and although we are an institution — not a family owned bank — the culture in the bank is like that of a family, with an open-door policy implemented by the executive general manager so that employees can discuss any concerns they have.”