Design is an essential part of our lives and how we interact with our environments, and it changes with society, catering to shifting needs. Design can also be the agent for change, shaping the way we think about the concept of identity, in particular gender identity.

Many people still use the terms sex and gender interchangeably but gender studies have made an important distinction between biological sex, which is mostly a dichotomy, and gender, which is a culturally imposed identity construct that teaches us what it means to be male or female, and affects the way we see ourselves and how we think and act.

The conversation on gender and design is increasing worldwide, with more and more designers challenging the status quo and changing the way they design. No longer perpetuating gender binary and society’s hetero-normative clichés, progressive designers are creating more inclusive design, and helping to spark the conversation on genderfluidity. Genderfluid design is still underestimated, but it is becoming more relevant. This is perhaps most evident in fashion, which has traditionally been associated with the expression of identity, though it also applies to other types of design.

The Far East, especially Japan, has a long tradition of clothing that is worn by men and women alike, such as the kimono. In recent years international brands from Gucci to Zara have experimented with genderfluid clothing. In Lebanon, the trend is catching on too. Several fashion exhibitions and shows have specifically focused on genderfluidity, notably during by Beirut Pride during Beirut Design Week 2017 and later that year by fashion design students at the Lebanese American University. One early comer into genderfluid design in Lebanon is Cynthia Chamat-Debbané, who opened her experimental clothing store Boutique Hub. and created the brand Urban Sense back in 2013. She describes her one-size-fits-most line as genderfluid, making the point to avoid using the common alternative, gender neutral, which she argues is a negative term that insinuates removing something from existence.

In her store, in addition to her own customizable pieces, she curates a selection of items from over 40 Lebanese designers, many of whom reflect her gender values, including Roni Helou, Jeux de Mains, Boshies, Civvies, and Kinamania. “Most of the time I identify as a woman, but I’m also very masculine in certain moments. I felt like my brand needed to reflect that—it’s not feminine or masculine, but genderfluid,” she explains. She says most of her clients are women, in addition to men who identify as homosexual, but a growing number of heterosexual men are beginning to buy her styles too.

Chamat-Debbané never studied fashion, but picked up the trade from her merchant father and began designing to answer her mother’s needs as her body type began to change with age. Having herself gone through weight fluctuations, she wanted to create a line that was more inclusive of body shapes, with comfort and functionality at its core. She explains that while some designers create statement pieces with the purpose of putting on a show and getting international attention, others, like herself, focus on function. “Clothes should always serve the body and its movement. They are tools to help us carry on with our activities. Clothes are here to serve us, we don’t serve clothes,” she says. 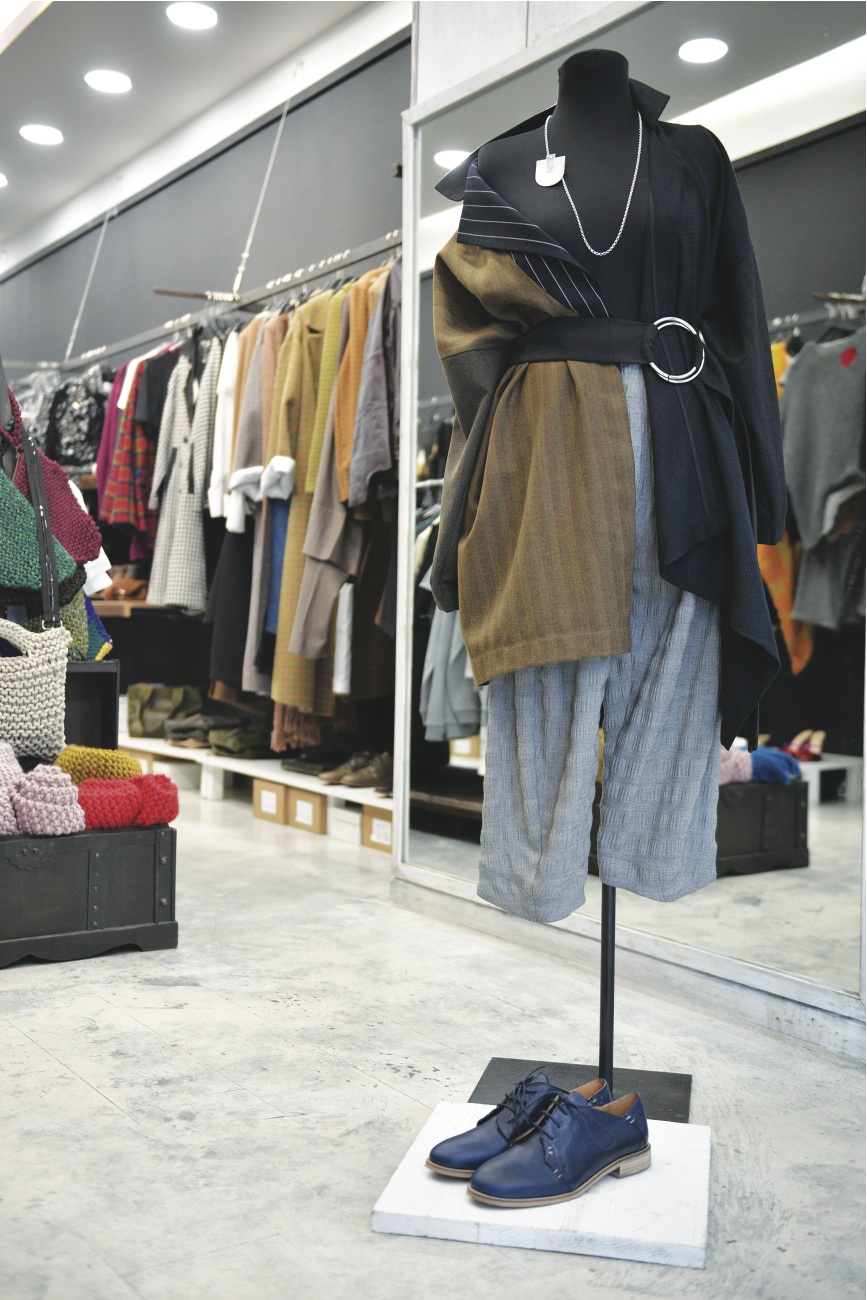 There is an economic dimension to this idea too. Chamat-Debbané explains that the more specific your target audience, the more variety of pieces you have to produce in order to create diversity, which is more costly, especially considering not everything is likely to sell. “If you design something that’s functional for any body type, age, gender, you end up selling more and producing less,” she says, emphasizing the ecological impact this has—in 2018 she was chosen as one of six international designers by the British Council-backed Fashion Revolution movement that aims to transform the fashion industry, including limiting the industry’s impact on the environment.

Genderfluid clothing is not supposed to lack sex appeal, “Sexiness is never in the clothes, it’s attitude and body language that make you sexy,” Chamat-Debbané says. She follows this idea with an alternative example: that rape has nothing to do with the clothing a woman wears. The sexiness of clothing is often the topic of debate when it comes to assault. In 2018, an art exhibition in Brussels challenged the “what were you wearing?” narrative by showcasing the various clothes rape-survivors were wearing during their assault, in order to raise awareness about sexual violence.

Such awareness is part of a wider topic of the objectification of women. Media and advertising often perpetuate this, and blindly follow society’s ideas of feminine and masculine. Stereotypes are not completely false because they are part of a social reality, but they emphasize some aspects while de-emphasizing others. Yasmine Taan, associate professor at LAU’s art and design department, teaches a gender studies course that looks at women in media and advertising. Since many of her graphic design students end up working in the field, she says it is important to encourage students to stay clear of stereotypes in their most obvious and subtler forms. While in the past it may have been acceptable for ads for household cleaning products to speak directly to women, today this is an unacceptable practice to a growing number of people. If women are to make any progress in society, it is partially the responsibility of advertisers to steer away from messages that confine women to patriarchal constructs.

Some newer advertising campaigns in the region have begun to highlight genderfluid concepts. A recent Dubai campaign for toy brand Lego features a group of mothers who are shown a video skillful child making an airplane. All the mothers assume the child is a boy, only to be told it is in fact a girl, with the ad ending with tagline “Imagination has no gender.”

Ultimately, many of these issues stem from the fact that design is a male dominated industry, like many others. Though more female designers are emerging, the balance of power still favors men.

Designer Karen Chekerdjian points out that there are few celebrated female designers, in Lebanon and abroad. She recounts that she was approached by an international company to sell one of her designs in their space. “They made it a point to say they only had male designers and wanted to include a woman, which I thought was very strange,” she says. She adds that they never followed through and today still do not have a single woman designer in their collective. It is not just men that perpetuate this problem. Chekerdjian recalls being approached for a project by a female editor at a European magazine, and when she researched the other designers involved she found they were all men. “Why does she not realize what she’s doing? Sometimes women are also part of that system,” she says. 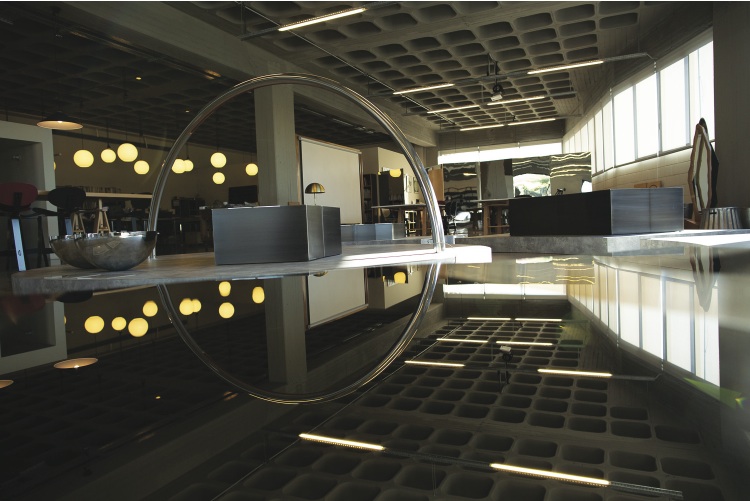 She also feels it can be difficult for women to work in male-dominated fields. “When I started it was difficult for me to make my male artisans accept me,” Chekerdjian says. “It’s a man’s world, in all [fields]. Especially in industry and production—women are not welcome in that world.” With time, Chekerdjian says she has become comfortable working as a woman in a male-dominated field, and has hope that attitudes are changing and more people are accepting that women are an equal part of the design sector.

The problem is that women’s underrepresentation also affects the outcome of the designs themselves and their user-friendliness for women. For example, biological differences between the sexes are not always taken into consideration. There has been international criticism recently for design of seatbelts, which were originally designed for a larger male physique, and did not take into account pregnant women at all (motor vehicle crashes are the leading cause of fetal death related to maternal trauma, according to research by Stanford University). Other objects receiving this type of criticism include lawnmowers designed for relatively long arms, and strollers made for shorter limbs. As gender roles are changing, such issues become problematic.

Some designers are catering to gender inclusiveness. Facebook is continuing to roll out its more inclusive gender identification system in further countries, where users can now choose from one of 71 gender options. In March, the world’s first gender neutral voice technology, Q, was introduced in Denmark as an alternative for distinctly male and female virtual assistants like Siri and Alexa. There’s also an ongoing conversation on genderless bathrooms. In the US, a collective of architects, designers, lawyers, and experts called Stalled! advocated to change the International Plumbing Code in favour of all-gender bathrooms, with the expectation these changes will be adopted at the local and state level. In Beirut, some restaurants have begun offering all-gender bathroom facilities—like Kalei Coffee Co.’s “anything works” stall situated between the male and female options.

Some designers are focusing on the specific needs of women. Designed by women, MEMI is a smart bracelet that vibrates to alert of calls and texts for women who store their phone in their purse—a need male designers might not have anticipated. More women in the design fields could mean more of such products that address their specific needs—not least of which is pockets.

One way to encourage more female designers to enter the domain is to highlight their predecessors. Taan wants to see more taught on female designers and is leading this effort with her work with Khatt books, a publishing house on design and visual culture of the Middle East. After having written several books on graphic designers from the region, she came to the realization that her subjects were all men and so began to research what women have done in the regional design field. She discovered that Saloua Raouda Choucair, who is mostly known for her art and sculpture, was in fact also a designer. She also found that artist Mouna Bassili Sehnaoui designed the famous Lebanon logo for the Ministry of Culture in the 1960s, as well as several posters encouraging tourism to the country. Taan says it is important to highlight the value that women designers have brought to our country, and is currently working on books about these female pioneers.

More inclusion of women designers is part of a larger trend of more inclusion in general, in design production and use. Design created by more people with varied identities can cater for a larger pool of needs. The conversation has started, but more designers and users need to see the value in embracing a wider variety of identities and their needs to drive this global design revolution forward.